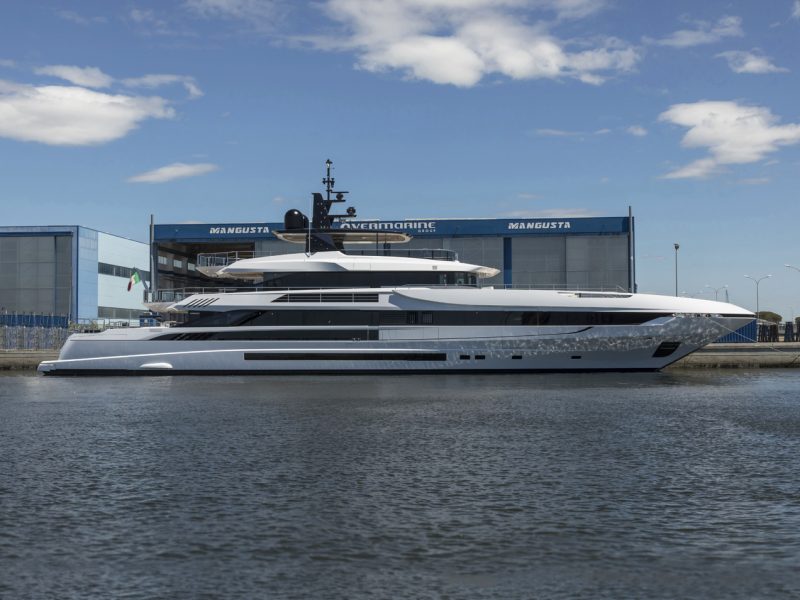 Overmarine Group announced the launch in Pisa, in the Navicelli area, of the second unit of Mangusta Oceano 50

The first unit of the flagship Mangusta Oceano 50 was launched less than a year ago, ‘Project Verona’, the second unit that has just touched the water in Pisa, has the American market as its destination. “This launch is the twelfth for the metal division of the Overmarine shipyard based in Pisa, which will be followed by two more in the coming months. We are very proud of the results achieved in just a few years with this division, which complements the composite vessels built in Viareggio,” said Maurizio Balducci, CEO of the Group.

Mangusta Oceano 50 is a steel and aluminium displacement vessel with a tonnage of 499 GT, born from the collaboration between the shipyard’s technical department, designer Alberto Mancini, and P.L.A.N.A. Design by Ing. Ausonio.

The Mangusta Oceano 50 offers ample living space both indoors and out, and thanks to its large full-height windows, some of which can be opened, it achieves perfect continuity between indoor and outdoor areas. One of the most characteristic outdoor areas is the beach, which overlooks three interconnected terraces on the water’s edge and is fully equipped for immediate contact with the sea. The bow area on the main deck features a large infinity pool and a second pool, also infinity, is located on the spacious sun deck. The shipyard offers different layout solutions for the interiors; the configuration chosen by the owner on this second unit of the Mangusta Oceano 50 is 6 cabins; the owner’s suite is located on the main deck and has an exclusive, fully automatic “balcony” overlooking the sea; a full-beam VIP cabin and 4 guest cabins are located on the lower deck. Alberto Mancini also collaborated with the shipyard‘s technical and interiors departments to create solutions in line with the requests of the Florida-based owner.

The ship is equipped with two 1,700-horsepower MTU 12V 2000 M86 engines that enable her to cruise at a maximum speed of 16 knots. With a range of up to 4,500 nautical miles at a cruising speed of 11 knots, she will be able to cross the ocean in comfort.

There is satisfaction for the line, Alisa, the first example received an award in London during the last World Superyacht Awards 2022 in the category ‘Displacement Motor Yachts 499GT and Below, 45m and Above’. Other vessels in the Mangusta Oceano 50 series are currently under construction at the Pisa facilities. The next vessel available for sale is Unit 6 which is scheduled for delivery in summer 2026.