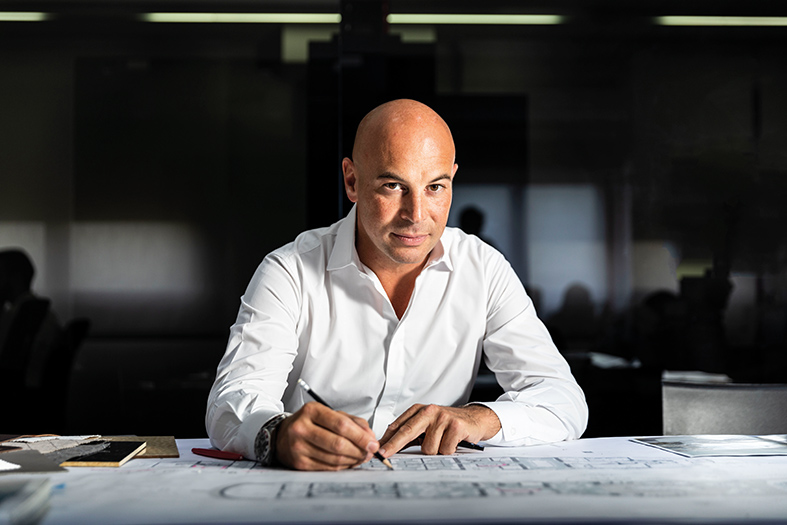 Unstoppable, passionate, enthusiastic: Christian Grande hails from the world of car design, but he’s become one of the first ports of call for boat design in Italy, and that’s not all. He observes and studies everything around him. A wide-reaching, uncontaminated vision to interpret the present and imagine the future

Interviewing Christian Grande isn’t easy. Not just because he gets into full flow, talking quickly with a constant flurry of impulses. Not just because he has an enormous passion for his work and needs to talk about it, but also because the interviewer becomes the interviewee as well. When I asked him how he nurtured his creativity he responded by saying: “My power light’s always on, I’m always recording”. And it’s true. Even when you’re the one asking the questions you feel he’s there to understand and learn. You can hear the cogs whirring. You have to stay on the ball, as soon as you loosen your grip he’s the one who’s asking the questions, finding out about the market, boat design, his colleagues. He never misses a chance to learn, even from me, a humble scribe. Christian Grande is someone who’s eager and knows how to listen.

So off we go. How would you sum up Christian Grande in three adjectives?
Eclectic, wide-reaching and young.

Let’s start with eclecticism.
Well, take our meetings for example. They don’t follow a set layout, quite the opposite in fact. We ask ourselves why we’ve done things, what could’ve been done better, what the next step is. We strive to understand what’s required now, and also what can be exciting and amazing, where the new aspect lies. 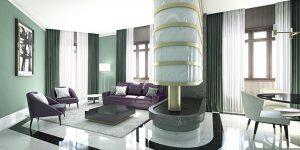 What about wide-reaching?
Because there are fifteen of us working together, and if boats are the centre of our world we also deal with products, pure design and even architecture. We’ve just won a contract for a large hotel in Art Deco style in Castrocaro, we’re in the process of designing some luxury flats in Malta, and there’s also a large swimming pool overlooking Lake Garda in the pipeline. We work with customers from Europe and the Middle East. This allows us to be contaminated, be nurtured by everything we see around us, and not be constrained by one environment. We’re also broadening our horizons in the boating world by starting a new brand of catamarans.

Knowing how to change your outlook…
Precisely. There are times when you have to get up close to objects, look at them carefully. Maybe you have to design a bitt for Foresti & Suardi or an easy chair for Besenzoni. You need to be able to distance yourself immediately afterwards, and understand how a boat is framed by the sea, or how a villa fits into its surroundings on the banks of a lake. This means being able to speak several languages. Understanding where you’re going on the basis of a solid background, the knowledge of what’s already been done.

Fair enough, this opens up your mind, it’s a source of inspiration. But can it not go too far, is there not a risk of losing your bearings?
No, not at all. If you’re able to change the centre of attention. At our place we’re all good at designing, we’ve got good taste. I’m saying that without false modesty, I really believe it. What’s more I consider myself lucky because I’m able to switch from small to large, ponder over an infinity pool one minute and switch to a slot for a sun lounger mattress on a Cranchi the next. And I can count on a great team, who are skilled, knowledgeable and curious. 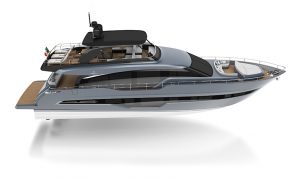 Lots of customers then, who differ from each other quite a bit. So does just one Christian Grande exist then?
I believe, in line with my learning experience, and I’m of the conviction, even philosophically-speaking, that the brand must win. A designer can’t think it’s possible to repeat styles from one brand to another, it would be ridiculous, and not very ethical. You have to understand your customers, what makes them tick, and produce symbols to represent that. If you’re good at what you do you’ll create styles that mutate over time, but which still unmistakeably belong to that brand.

Let’s look at some examples and start with describing the identity of your main boat customers such as Cranchi, Sacs and Invictus.
OK, stating from the outset though that I’ve been lucky enough to be able to choose my customers. And when I do it’s like a marriage. They’re each distinct and different from each other. I don’t want to create any competition, when I’ve got a good idea I give it to the most suitable recipient, and it will remain that customer’s.

OK, let’s start with Sacs.
Anyone who buys one of their Ribs nearly always has one or two boats already. They’re large toys for anyone wanting to enjoy the pleasure of steering and sailing, boat owners with a big personality who love to turn heads. 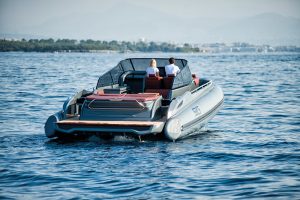 And Invictus?
Invictus customers are obsessed with detail. You recognise them right away, in how they dress, how they act. They’re not after an acclaimed brand, on the contrary, sometimes they have to explain what Invictus are.Maybe they buy Invictus for the pleasure of exploring and showing everyone else the way.

Cranchi?
In my opinion, Cranchi’s customer is the most difficult to describe.That’s harder because the range is wider, starting from the small boats through to the Magnifica 78. Even here there’s a story though. These customers are family people, always thinking about functionality and how space is used to reach the best quality-price ratio. They also pay attention to detail and this aspect is increasing. They don’t want to enter the harbour creating a ‘wow’ effect, they want people to see a sophisticated object for a distinguished boat owner. A balanced vessel destined to last over time that they won’t get fed up with. 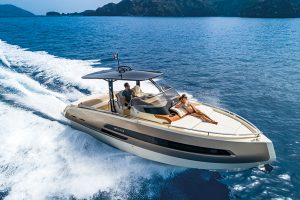 A hard question now. A boat for yourself, what would that be like?
That’s a hard one, because I worry myself a bit.

How do you mean?
I’m constantly on the lookout for things, I’m over-stimulated, ‘over-exposed’ to ideas and suggestions. There’s the risk I’d want to change it right away. If I made something that suited me today I could imagine it already being surpassed tomorrow.

Getting back to the question though…
Not forgetting that I spend my days designing and testing boats, so lots of opportunity for having free rein on a wide range of them, I think I’d go for something timeless, maybe something in steel, a boat that’s a bit older. Otherwise I’m sure I’d get bored right away. And it’d need to centre around family needs. I’ve got a wife and three children and don’t spend nearly enough time at home… 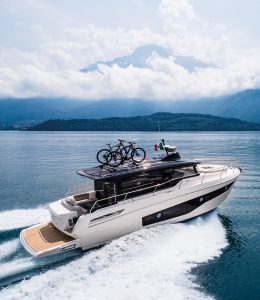 Talking about family. Did you spend your holydays on a boat last summer?
Yes, of course. On aTrawler 36 by Cranchi. An intelligent boat. A design they wanted that was a pleasure to work on as a designer. It’s perfect for sailing, enjoying the trip, not worrying about anything, just enjoying time with the family. It’s a boat that’s a bit homely in terms of functionality but also very nautical. And for the boatyard it’s an ideal starter size to appeal to future boat owners.

Previously you mentioned a ‘timeless’ boat, does the nautical world of days gone by fascinate you?
Definitely. As a company we’re dealing with increasing numbers of large refits. The latest is an 85-metre Blom&Vhos, the ex Golden Odyssey II, now Grand Ocean. These projects are massive, inside and outside. Another aspect of our work, and our capability to be wide-reaching.

Where’s nautical design headed, how does Christian Grande imagine the boat of the future? Is transformation very much the ‘in’ thing?
I’ve seen really spectacular transformed boats at boat shows, where the transoms have been compromised. You need to remember that the boat has to travel by sea. If you’re striving to find the best way to make use of the same environment in several ways using mobile elements, OK, you can do it, but be careful not to go over the top. Transformed boats can also often be clumsy. The way forward may well be another…

In other words?
Finding an intelligent, feasible method using electricity. It’s still early days but that may be the direction to go in. ‘Stealing’ the pleasure of the transfer from the sail, and sailing in silence.

Finally, has anything made by your colleagues in the industry caught your eye?
The British boat builders are creating some excellent boats, I like what Princess and Fairline are doing. And I think Mauro Micheli is always doing great things. And there’s Sanlorenzo SX88. It’s a head turner but not excessively so. It’s a great boat. Luca Santella launched an exceptional idea and Sanlorenzo has presented a perfect product at the right time, after lengthy preparations. They’ve made a boat that only they could have done, an amazing boat, and I say that with admiration. The most stunning stylistic job of recent years.