Words of truth, the editorial by Franco Michienzi

The Genoa International Boat Show was a great success, but also provided a stage for today’s politicians to make all kinds of statements, often with no real links to reality. What we really need is more tangible help for the yachting industry

It’s often the case that we only listen to spoken words because they sound good or they’re designed to convince us about something that is not exactly true. This is increasingly the case in adverts. “You can now have the burger you’ve always dreamed of…”. It seems bizarre to dream about a bun that you will know will be soggy and rather suspect when it arrives. When I dream, it might be about an island surrounded by an uncontaminated sea, or many other things that I won’t bore you with now. The Americans, who came up with the hamburger, dream of exploring the streets of Rome in a horse-drawn carriage, admiring the wonders of the eternal city. Another example could be: “the pizza you love…”. We usually love people, the ones who make your heart beat when you see them and you don’t know why. At most, when you see a pizza you want to eat it. Then we have the car adverts that literally drive me mad. They tell us that all we have to do is buy one of their cars to become an explorer in an unspoilt land and turn into a sort of modern Indiana Jones. There’s nothing really bad about this. We’re grown-ups and aware consumers who, instead of boring ourselves on the sofa gulping down a series of movies that all have the same plot, may actually decide to cook up something much tastier. However, when words like these are spoken by politicians, that’s when we need to start worrying.

«I’ve been coming to the Show since long before I was a Member of Parliament», said Paola De Micheli, Minister for Infrastructure. «Covid has changed our priorities. Last year we talked about figures, this year we’re talking about our pride in getting started again. Sixty years is almost retirement age, but the fresh new way in which this year’s show has been organised really conveys the strength of this sector. In this new world there is a different Europe that has decided to take on a shared debt to support its economies. We’re getting involved in the Recovery Fund and we already have a starting point, the Italia veloce (Fast-track Italy) plan that includes ideas able to will help us to receive funding». She also added: «Ports will receive a huge last-mile investment with a focus on their green infrastructure, represented by ‘cold ironing’, that is to say the electrification of the quays so that moored boats can keep their engines switched off. All this is in addition to the major plan for the nautical sector represented by the replacement of the fleet in keeping with environmental priorities. The market needs to be assisted on the basis of these priorities: both environmental and economic sustainability. Today we’re celebrating our capacity for resistance and for relaunching the nautical industry, in which our quality is undisputed». All these things are good and true. The minister has genuinely good intentions, but reality progresses more rapidly than nice words. 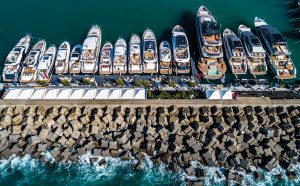 We had been promised that the matter of VAT on nautical leasing, under which we are penalised compared to other European countries such as France and Malta, would have been resolved. Yet once again, the pleasant general statements do not really match the real needs facing our sector. This issue has been forcefully underlined by the chairman of Confindustria Nautica, Saverio Cecchi. «We’re market leaders, but the other countries are starting off at an advantage: we want to start on an equal footing. While Moscovici burdens us with the infringement procedures, with France he limits himself to a simple reprimand. Croatia is applying subsidised VAT for hotels, Greece is extending the boundaries of its territorial waters and we have to chase. If a boat owner registers in France and Croatia the real loser is the treasury with a 72-million-euro loss in VAT. We’re the pride of Italian manufacturing and we deserve respect». Cecchi is deluding himself, but politicised politics does not make allowances to pursue populism, keeping well away from a sector it does not know and, even more seriously, failing to recognise its potential as a great driving force of development.

The other issues still awaiting a solution include the one regarding the new IMO Nox Tier III regulation, established by the International Maritime Organization (IMO), on the reduction of emissions for yachts over 24 metres long, which will come into effect on in January, even though not all boat yards and engine manufacturers are ready. A deferment is needed while we await an optimum solution.

Unfortunately, according to the mass media, every measure in favour of the nautical industry appears to be an allowance made for the wealthy. If they talked about the creative, artisanal and industrial capacity of the world of boats instead, this feeling of social envy would make way for applause, respect and pride, which is well deserved by everyone working in this fantastic industry. 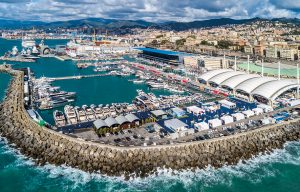 Prime Minister Conte often opens the country’s most important shows and trade fairs, but he did not deem it worthwhile to come to Genoa to demonstrate his support for a strategic sector of Italian manufacturing.

Another lost opportunity. Liguria’s regional president, Giovanni Toti, did not fail to notice this: «The Boat Show is a symbol. Those who have come here have invested in building a small piece of the country’s relaunch. Two years ago we were here with President Mattarella to say that Genoa would never stop. And now we are here to demonstrate that we have to learn to live with Covid. Making decisions about an issue such as this is something we have never experienced before. All sorts of adventures have begun in Genoa over centuries past and now this one is starting. This Boat Show sums up the spirit of this regional organisation. We can build a large district between Viareggio and La Spezia that holds all this together». I hope that this idea of Toti’s really comes true.

Nevertheless, successfully managing to organise this sixtieth Genoa Boat Show is a real reason for everyone involved to be proud. Alessandro Campagna, general manager of I Saloni Nautici, stated: «The sixtieth Boat Show welcomed 71,168 visitors and 824 brands showcasing their products in an area measuring more than 200,000 m2on land and in the water, 90% of which was outdoors. This is truly unique compared to previous events, making it possible to organise a show that combined safety with efficiency. It was a unique show, the expression of a paradigmatic change, which recorded strong numbers of qualified, specialised and business-oriented visitors. We focused on product quality, with a view to enabling companies to reach their target. The opening of the Boat Show was the real celebration of this sixtieth year and we focused on all the efforts made over recent months as a common factor. There’s a lot of pride around it. These six days proved important and effective, both for exhibitors and visitors. There was a positive, exciting and experiential climate, achieved as the result of great teamwork».