Since 1977, the Port Townsend Wooden Boat Festival, which is held every second weekend of September, has been attracting thousands of fans every year who all have only one prerogative in common: pursuing and maintaining a calling with deep-rooted origins

text and photos by Bruno Cianci

AT THE END OF SUMMER, THE PACIFIC NORTHWEST REGION BECOMES CROWDED WITH WOODEN BOATS AND ENTHUSIASTS. The Port Townsend Wooden Boat Festival, which had its 43rd edition last September (2019, ndr), is the most popular event on the calendar in this corner of the world. Organised by the Northwest Maritime Center, a non-profit organisation founded in 1978, the maritime event is open to everybody, from children to adults. In a friendly and inclusive way, which is typical of the American culture, it offers a lively series of meetings, seminars and shipbuilding competitions. Last but not least, the weather and sea conditions are generally pleasant and even geography contributes to the success of the event: Seattle, which can be reached through the famous Puget Sound, is 40 nautical miles south; Victoria, the most important city on the island of Vancouver (home to another festival), is located right in front of the Strait of Juan de Fuca, 35 miles north-west of Port Townsend, and Vancouver is located 90 miles north.

Seen in Port Townsend
The famous boat designer Sam Devlin is a regular visitor of the festival, in fact he missed only its opening edition. Over the years, the event has become the main showcase for his motor and sailing boats (between 2.5 and 18 meters in length), which are still stubbornly made with the “stitch & glue” technique that made him famous. Although Delvin didn’t invent the technique – the famous “Mirror” had already been built in the same way -, he deserves the merit for taking it to its highest point. He assueres: «Theoretically, I could build boats of 150 feet in the same way, even if for now I have had to stop at 62 feet, which is the size of the largest boat I have built».

Another “veteran” of the event is Pete Langley, owner of the legendary Port Townsend Foundry (PTF) and brother of “Pat”, a former trusted sailor of Dennis Conner. Every year, during festival days, Pete rents the historic building “The Cottage”, located inside the port that hosts the event. In front of this beautiful building, Langley proudly displays bollards, turnbuckles, handles, bells, plates and other hardware: all made with the most resistant and refined alloys. The goods on display are beautiful to see, but the best way to appreciate these objects is to embark on the schooner Martha (1907), a true “ambassador” of the foundry’s creations. From the candelabra to the keel bolts, almost all the hardware on board was produced by the PTF after 1983, the year in which the brand was revived, exactly one century after its foundation. 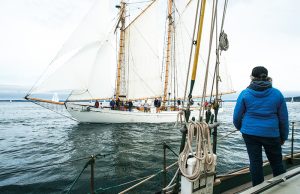 Alcyone at the schooner regatta

In the water
There were 144 boats present at the 2019 event, not counting those regularly docked in the port. The Lotus (1905) wooden motor yacht, which is usually moored alongside the MOHAI (Seattle’s Museum of History and Industry), was moved to Port Townsend to provide affordable accommodation right in the heart of the festival. Another regular neighbour of the Lotus was moored next to it: the Tordenskjold workboat, a schooner built in Ballard (Seattle) in 1911 and, since 2012, owned by Northwest Seaport, a non-profit organisation dedicated to the conservation of maritime heritage. Among the larger boats was the Blue Peter, a motor yacht launched in 1928 on Lake Union (Seattle), which takes its name from the signal flag flown by ships preparing to leave port. With its 29 meters, this yacht can accommodate up to twelve guests.

Along the same pier were the Merry Chase and Cape Ross, two other frequent participants in the region’s events. The latter was built by Sterling shipyards in 1952 for the Canadian Fishing Company. It was then withdrawn in 1999 and converted into a cruise boat after six years of restoration. The Merry Chase, on the other hand, began its existence in 1929, after which it was confiscated by the authorities under the War Measures Act in 1942. Today, the boat is managed by a charter company. Among the smaller boats in water we would like to point out the Felicity Ann. On board this small sloop, Ann Davison sailed across the Atlantic Ocean between 1952 and 1953, as the first woman ever to complete a solo crossing of the ocean. The boat was recently restored by the Northwest School of Wooden Boatbuilding in Port Hadlock, and then transferred to the Community Boat Project which uses it for educational purposes. 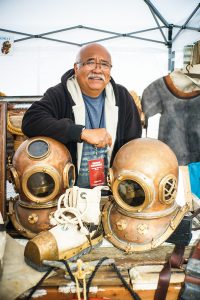 On the mainland
The organisers regularly set up kiosks and other structures around the docks, where exhibitors show their products, such as rowboats, sailing dinghies, tools, apparel or books. Beer and food (don’t miss the chowder, a creamy soup with seafood) and good live music create the unique atmosphere that continues late into the night. Being a port area, there are also some fixed buildings, such as the one located west of the port, which, among other stores, houses the Brion Toss Rigging store-workshop. Jen Bates, a Canadian staff member, has been attending the festival since 1997. According to her: «In the past there were more sailboats, while now motorboats are more popular. Moreover, the festival counts on a greater audience, while the stands are a bit less focused on the sea than in the past. Nonetheless, the festival remains something we are very proud of as residents of Port Townsend». Jen is married to a colleague who is an American rigger and woodworker, and they have two children. One is called Chance and is a member of the crew on the Martha. As his mother declares: «My son was lucky to grow up in a city that supported his passion for boating. He is now involved in regattas and in teaching sailing to young people at the Northwest Maritime Center». As we find out later, the mission of this organisation is to involve and train people in traditional maritime life in a spirit of discovery. The centre manages a campus that leverages maritime experiences to educate and inspire people, all at the service of the local community and industry. Because – as the organisation’s website states – the sea is the most powerful teacher of all.