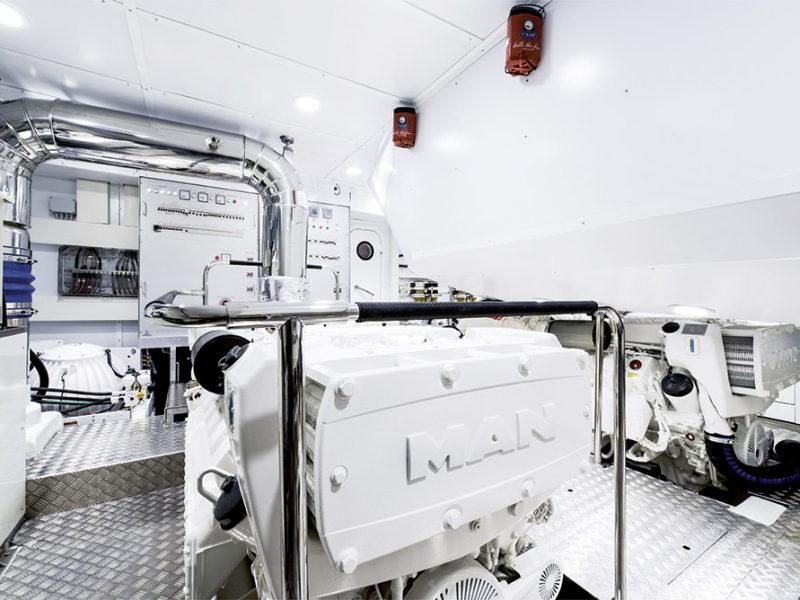 Resilient mounts and couplings are essential for achieving a high level of comfort, forming a barrier to prevent noise and vibrations from being propagated and reaching every corner of the boat

This is the third part of our feature. Can you remember the previous parts? We discussed the fundamentals of vibroacoustics, the noise and vibrations that travel through structures to reach all corners of our boat. The barriers that protect and isolate us from this inevitable noise are resilient mounts and couplings.

When we enter the engine room we don’t even notice them – the propeller, gearbox and generator act as solo performers. However, the mounts and couplings are doing their job, quietly and with no fuss, letting us enjoy peace and quiet on board. I must admit I’ve struggled a bit this time. It all seemed too technical and I wondered whether or not I should be tackling the subject, and how.

In the end I was convinced though, because understanding these components is an essential building block that I wanted to provide. I hope it’s useful and means you’ll be going into your engine room with renewed curiosity, admiring the main performers while glimpsing the surrounding orchestra. In this feature we will answer three questions that concern our cherished anti-vibration mounts:
• Where are they situated on board?
• What functions do they carry out?
• What types exist and how are they made?

Where are they situated on board?
This question is easy to answer if we understand their purpose – they are situated anywhere that vibrations can be transmitted to the boat’s structure. Go into your engine room and have a look under the engine, the inverter and the generator – the anti-vibration mounts are the ‘feet’ or supports of various shapes and sizes.

Don’t forget to look above the engine, which has to release exhaust gases to operate correctly. Even exhaust pipes need to be connected to the hull or deck above the engine room, and even they transmit vibrations generated by the engine. In addition to vibrations produced by machines individually, given that they are connected to each other they can ‘swap’ vibrations. As a result, we need couplings that can connect machines and transmit the power produced, but which protect them from vibrations.

What functions do they carry out?
In the case of resilient mounts, they have the dual function of operating as an insulator, and supporting the weight of the machines positioned on them. They also absorb external movements caused by the motion of the boat, protecting the machines connected to them.
In the case of couplings, the function of isolating vibrations is combined with the ability to transmit torque and compensate for misalignment between the drive shaft and the exhaust pipe. Boat builders make different types of propulsion lines depending on boat layout and construction requirements, which are increasingly more compact, letting us enjoy more living space on board. Numerous variations are possible, but the following three are sufficient for understanding their basic principles:
• Engine and gearbox connected but not tightly (known as a freestanding arrangement)
• Flanged coupling between the engine and gearbox (known as a close-coupled arrangement)
• V-Drive (due to the V shape of the propulsion line).

This type of coupling is upstream of the gearbox, and is designed to absorb axial displacements (i.e. longitudinal movements of the mounts) through a metal membrane. Likewise, the flexible component is made of vulcanised rubber, enabling radial displacements (vertical and lateral). The geometric combination of the two components therefore addresses the issue of displacement in three directions. There are three configurations that meet various requirements, by acting on the torsional frequencies and vertical movements of the engine. 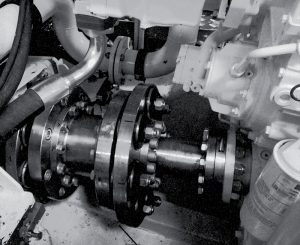 SHAFT LINE COUPLINGS
These couplings are downstream of the gearbox with respect to the previous couplings, and are more rigid from a torsional standpoint, but thanks to a special mechanical configuration they are soft radially. Finally, the rubber part consists of a specific number of bushings positioned radially on metal discs, acting as a barrier against structural noise. 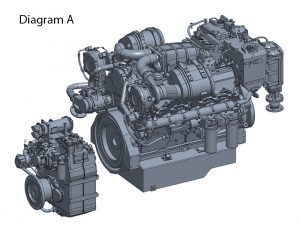 Let’s start with the freestanding case: DIAGRAM A. In this configuration the engine and gearbox move separately, so they can be considered separately for the purpose of vibrational analysis.

The engine. To isolate it we need fairly soft mounts (remember the second feature? More vibrations are damped the softer they are). They must support the full weight of the machine. The role of the mounts is to ‘cut’ vibrations coming from the engine, and compensate for displacements caused by movements of the boat. The type of mount chosen may vary, but a conical shape is suitable for achieving this combination of functions. 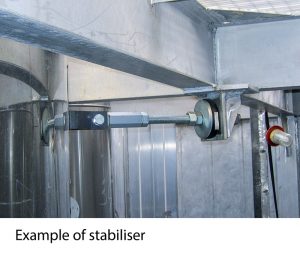 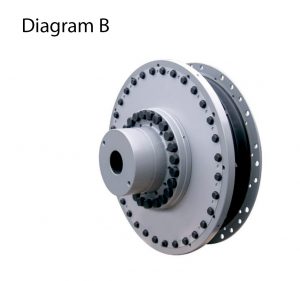 Highly flexible coupling, such as the coupling in DIAGRAM B, will cut the noise transmission route from the engine to the gearbox. This coupling is therefore designed to isolate the vibrations and modify the torsional characteristics of the propulsion system, improving them and cutting the torsional vibrations. Engine displacement can also be offset thanks to the flexible component, which handles the deformation (flattening) of the resilient mounts due to the weight of the engine. 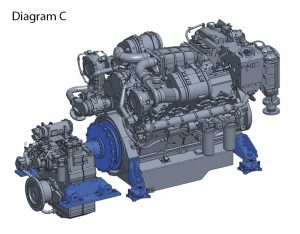 This takes us to the gearbox, DIAGRAM C, which connects the engine to the propeller. Don’t forget that, as a result of the propeller, our propulsion line is subjected to force that has to be absorbed by some part of the system, such that it remains firmly anchored to its original position.

If the gearbox carries out this function, its mounts will perform the following functions:
1. Restrain the gearbox in its longitudinal position, i.e. withstand the thrust.
2. Isolate vibrations.
3. Compensate for small relative lateral movements.

The support will be stiff lenghtwise, enduring an enormous thrust, more flexible in the vertical direction: a bushing represents, in this case, a good solution. There is an alternative solution to this configuration that is better in terms of vibroacoustics, whereby another component external to the gearbox withstands the driving force. 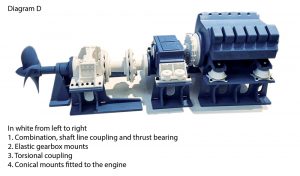 Look at the configuration in DIAGRAM D. How is it different to the previous setup? Two new components have appeared:
1. A thrust bearing between the gearbox and the propeller shaft, connected via a shaft line coupling.
2. Disc or ring-shaped mounts on the gearbox, fitted to metal plates, which are softer than bush mounts, especially transversally and longitudinally.

This second configuration makes machines more independent, with the engine and gearbox freer to move in the space available. The energy spent in the movement and absorbed by the insulators is therefore not transferred to the structure. In the other two configurations, with the close-coupled and V-drive setup, the considerations regarding resilient mounts will be similar. What changes is the type of engine/gearbox connection, it is the coupling connecting them that will have different characteristics. Let’s look at them in more detail. 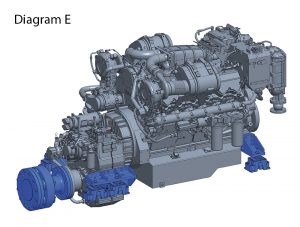 The close-coupled case: DIAGRAM E. The function of the coupling between the engine and gearbox will be almost exclusively torsional (the coupling is not shown in the diagram, you can see only a part of it, it is closed within the arrangement). The engine-gearbox unit can be fitted with anti-vibration mounts that must be rigid to withstand the force, but soft in the other directions, as those arranged in a V shape, shown in the diagram. Another coupling could be used to isolate the system in the direction of the propeller, which is rigid in the longitudinal direction and softer radially to act as an insulator. If the thrust bearing is external to the gearbox, the mounts will be soft and still conical, as in the freestanding configuration. 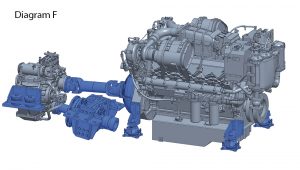 Finally the V-Drive in DIAGRAM F. This is the same vibroacoustic situation already dealt with in the freestanding case, where another component is inserted, a cardan joint, to connect the engine and gearbox at a distance from each other. This must be considered in order to choose the right components. We have mentioned different types of insulators which are selected on the basis of their caracteristics and functions, let’s look at them more closely by analysing their specific features.

Resilient mounts – how they are made
We have already faced these, having analysed their function in the various propulsion configurations. They are made of rubber and metal, and for simplicity are often known as rubber-metal mounts, while their shape makes them uniquely identifiable. In the graphic below summarises the main types, categorising them according to shape.

Conical mounts
These have a metal base which is secured to the frame, a rubber part (the cone), a cap and a central pin. The engine transmits load to the cap, and the rubber part reacts in three directions thanks to its flexibility and geometry, ensuring the arrangement is stable. The mount remains centred with respect to its rest position. 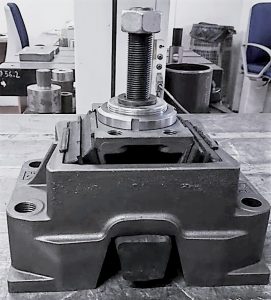 Mounts with preferential rigidity
These mounts are characterised by different rigidity in the three directions, thanks to their design. The V-shaped mount shown in the diagram has longitudinal rigidity that is six times higher than the lateral and transversal rigidity. It is this very characteristic that enables it to counteract the thrust of the propeller.

The disc mount in the diagram in the left side is rigid vertically and very soft transversally. They are not used on their own, but stacked and fitted onto a metal plate with another pair of discs.

Cylindrical mounts
Also known as bush mounts. The rubber part is inside and constrained between two metal parts. They withstand the force, resist the strain of the gearbox’s tilting moment, and are less rigid transversally. 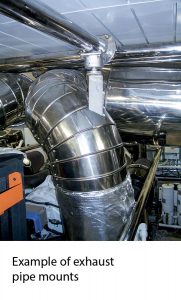 PIPE MOUNTS
No, I didn’t forget the pipe mounts. Insulators carry out two functions and there are two types of mounts which, combined, resolve the issue. The first mount supports the weight of the pipe, the other maintains its position – these are the pipe mount and stabiliser respectively. The mounts are identical to those of the engine, and sized for the weight of the pipe they are supporting. Stabilisers are similar to the gearbox mounts, and are made to react to tensile and compression forces. Given that they must work in contact with high-temperature pipes, some of them have heat insulation between the flexible part and the connection to the pipe, to protect the rubber part. If you didn’t know already, you should now have a better idea of the configuration of your shaft line, and can easily recognise where mounts and couplings are fitted on your boat, and even identify the type. Has this been useful? Send us photos of your boat and propulsion shaft, identifying the type of mount and coupling installed on board (if accessible). We’ll publish photos of the boat owners who have identified the correct configuration of their boat on our LinkedIn page.
See you next time!