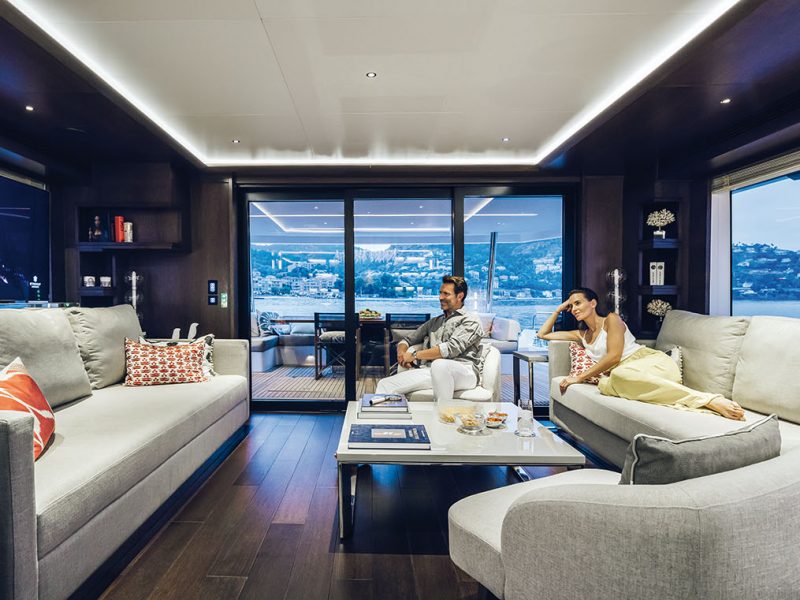 We will now consider the ways noise is transmitted, and methods for obtaining sound insulation and increased comfort on board boats

In BARCHE MAY issue, we looked at the main sources of noise. As promised, this second article will further analyse how it is transmitted, and the tools and methods available for obtaining the required level of sound insulation.

How are vibrations and noise transmitted?
If we consider the engine as a source, it transmits noise and vibrations to recipients as follows:
• through the surrounding air
• through the solid structures of the boat. 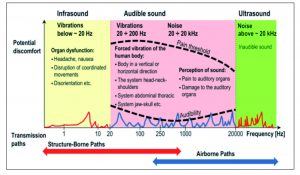 The latter is harder to control in terms of vibroacoustics, as the relative position of the source and receiver affects it to a lesser degree than in the case of airborne transmission. Basically, structure-borne transmission enables vibrations to reach points that may be a considerable distance from the source.

In other words, sound energy is generated by the sources and transmitted to receivers (in this case people) through structures, in the form of noise and vibrations. 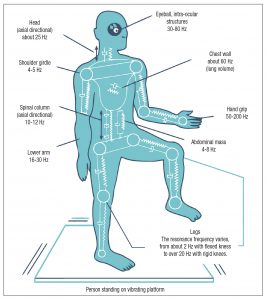 The Figure on the left shows a model of the human body where the main organs are illustrated using mass-spring-damper systems, each of which has its own natural excitation frequency. To put it simply, when our body is subjected to vibrations with frequencies comparable to its own, the organ ‘resonates’, vibration magnitudes are amplified, and the organ or part of the body concerned feels discomfort. 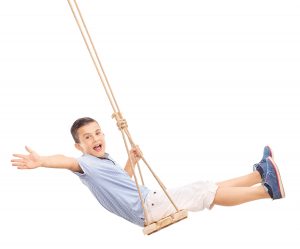 Natural frequency and resonance
When pushing someone on a swing, to continually increase the motion we must apply pushes that may be small, but are always synchronised with its motion. When the swing returns to the maximum point and starts going forward, a small push increases the magnitude of the oscillation. Resonance occurs when a body is subjected to vibrations with a frequency equivalent to the natural system frequency. When the excitation frequency is close to the natural frequency, the system oscillates at a very large magnitude, which is only limited by the damping of the system itself.

How is noise insulated?
Airborne noise can be insulated using panels, but to achieve effective results in the case of noise transmitted through structures, a mechanical barrier to vibrations must be created, which is as near as possible to the sources and in every direction where there is contact between the sources and the structure. Insulators or anti-vibration mounts designed to work with the frequencies generated by the sources can be installed between the engine, gearbox or other rotating machinery and foundations. As already observed in the case of the human body, these mounts are defined in relation to their rigidity (the spring) and damping characteristics, and the inertia identified through the mass of the suspended system (the engine, gearbox or both).The characteristics and design of anti-vibration mounts reduce vibrations by dissipating the energy produced, and transmitting residual vibrations (at the lowest possible magnitude) to the structure, which reacts according to its own characteristics. Without going into too much detail, the general idea to remember is that soft anti-vibration mounts with a low level of rigidity are required for maximum comfort on board. 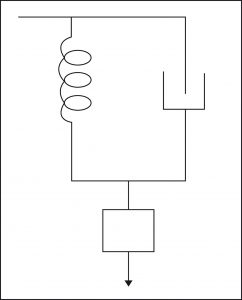 Mass-spring-damper system
This is a physical model that describes the vibrational behaviour of a body, by assigning the characteristics of inertia, rigidity and damping to three representative quantities:
• the mass represents system inertia
• the spring represents its rigidity, the characteristics we intuitively perceive when we try to move it from its rest position
• the damper dissipates energy due to friction and converts it into heat.

Soft rubber adapts to the movements of a source, ensuring that they are not felt by recipients. Take a rigid sports car, for example: the driver can feel every bump in the road. This isn’t the case in a sedate, luxury car that adapts to the road with soft suspension. Structure-borne noise transmission is also affected by the stiffness of a structure (mechanical impedance) and, depending on the impedance value, the mounts will provide insulation against, or at least damp, the vibrations. It is essential to choose anti-vibration mounts with characteristics that suit the propulsion system.

Let’s look first at some examples of passive solutions which, depending on their complexity, produce different insulation solutions and therefore a different quality of comfort on board. Diagram A displays the simplest solutions, which are also the least efficient in terms of insulation. In the first, photo 1, only the engine is suspended elastically with conical anti-vibration mounts. The second, photo 2, system has a flanged engine-gearbox system suspended semi-elastically, with elastic mounts for the engine and semi-elastic for the gearbox. The third solution, photo 3, has the engine and gearbox fitted separately, with the engine supported. Photo 4 shows the flanged engine and gearbox supported elastically with an elastic joint and thrust bearing on the shaft line, which contribute to the insulation. In Photo 5 the in-line engine and gearbox are supported with soft anti-vibration mounts suited to the source requiring insulation. Finally, photo 6 shows, a double elastic joint, which, being softer than the single-stage one, is characterized by optimal sound insulation.

It should be remembered that, in specific cases, current technology may also provide active systems as an alternative, with actuators counteracting vibrations generated by noise sources. The active part uses actuators, and generates a counterphase frequency to counteract the vibrations generated by sources. Irrespective of the solution adopted, residual vibrational energy will obviously be transmitted to the structure.

During the project stage, we should pay attention to:
• the design of the structure itself
• how to insulate one part of the structure from another.
For example, a vibration barrier can be created by placing an anti-vibration mount between a pillar and the deck. The same principle applies for insulating the entire superstructure. Another solution typically used for yachts, diagram B, that works in a similar way is a floating floor (supported with anti-vibration mounts or placed on rubber bars). 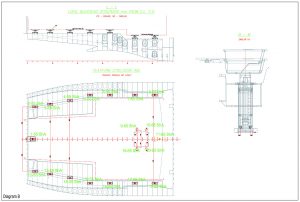 Of course, it goes without saying that for any type of anti-vibration solution to be effective it must be developed in parallel with the combination between boat structure/anti-vibration mount. Impedance characteristics must be optimised by considering materials and their shape. Sophisticated calculation systems are a great help with this: they can be used to support the design of structures (SEA and/or FEM analysis), giving a good approximation of behaviour. In summary, the goal of on-board comfort has an enormous impact on the mechanical design of a boat, especially the propulsion system. There is no single solution: it all depends on the characteristics of the boat, and it is extremely important to define the aims carefully, splitting them into intermediate objectives to be handled appropriately, and giving each its due consideration in relation to the costs involved and the resulting efficiency. It should be remembered that structure-borne noise will continue to be the most serious issue if not analysed properly during the design phase. The aim, of course, is to achieve the long-held dream of sailing in silence.

In the next issue, we will explore how anti-vibration mounts and elastic joints are made, how they work, and how they are selected according to the configuration of the propulsion system.