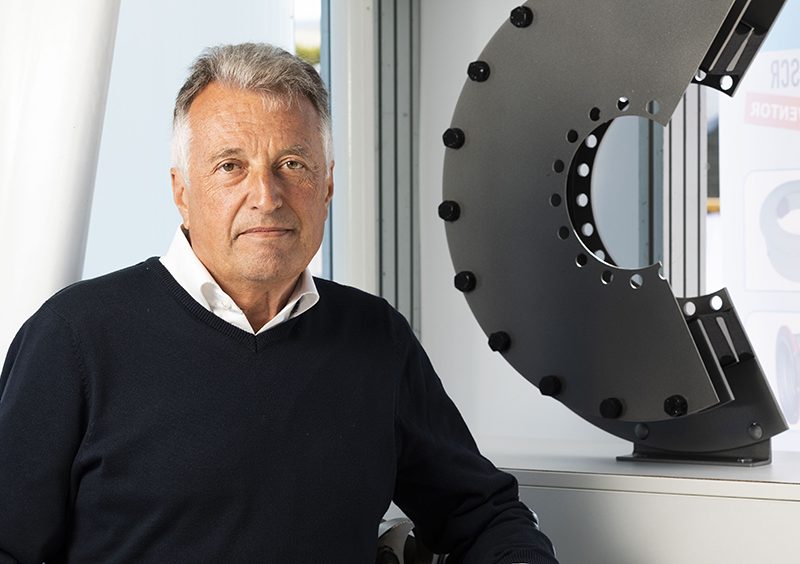 This is the first article in a column that will also feature on our website so as to enable real-time interaction with users. We will try to understand, step by step with the help of Dr. Vulkan, what vibroacoustics are, and the effects they may have on board a boat

This project BEGINS WITH AWARNESS AND FROM A FEELING. Awareness that nowadays, even more so than in the past, COMFORT, and FEELING GOOD on board are the most important targets, owners and people, who enjoy the sea, look for on their vessels.

The feeling, experienced when talking about vibrations and noise to people who don’t work in our field: ‘Fear’ and Bewilderment, sometimes a real rejection. Considered as an obscure and difficult issue, that is the exclusive domain of people who work in the sector only, whereas it is essential in ensuring the good level of comfort aboard. The goal has been to simplify everything, and to get all you, owners, directly involved. We thought the most obvious thing to do would be to try to line everything up: from the start to the end, passing through what is in between, what we can do and how, so that brick after brick, we could build our bridge together.

We are trying to make the coming months a chance to have a look more closely and to boost, the keyhole for anybody curious to peek inside our small, great world. We only have the dream that it won’t be just a quick glimpse, but rather the opportunity to come together and share, discuss and tackle real problems – the problems that you, who enjoy your time on board, would like to resolve or avoid, the ones that we would like to give our contribution to.

So, let’s start: happy reading to you all (and happy listening to us as well)! 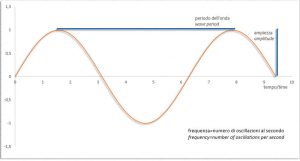 A vibration is the oscillating movement of a system around its equilibrium point. It is defined by physical characteristics such as amplitude, wavelength, frequency and energy. The vibrations are unpleasant to the recipient, according to their type, giving different feelings that affect sensitive organs in the human body (so the recipient).

The basics: sources and transmission
Let us start from the lounge and cabins, places where we live during a cruise: the aim is to feel comfortable, as if we were at home. But something is bothering us: an annoying noise and unwelcomed vibrations. They have their origin somewhere, and for some reason, and they can reach any part of the boat.

How can we overcome them? The first reaction, and the most intuitive one, would be to create a physical barrier, a kind of wall to absorb noise and vibration. We should go straight on to say: that’s not enough, the problem can only be solved if the underlying cause is properly understood. We will try to get deeper into the subject starting from the places where we live and spend time, and where the problem is most clearly felt, although that is not where it starts. Then we will move on taking a closer look at the main noise and vibration sources, so we can define their characteristics. This first analysis will then allow us to clearly identify the issue, thanks to a simple sound and vibration measurement, discovering the source before taking the correct cure to resolve it.

So, let’s take a step back: what generates vibrations and noise aboard? First of all, we should define two different kinds of sources:
• rotating machines, creating forces and so vibrations with clearly defined frequencies, according to the inherent features of the generating machines (endothermic and electric engines, gearboxes, propeller shafts, propellers, alternators, pumps, compressors, ventilators, etc.)
• the sources that generate impulsive, swirling, random forces that are difficult to be defined mathematically and which involve a range of frequencies of variable range (wind and waves, aerodynamics, hydrodynamics…).

And two transmission media both are influenced by the characteristics of the media through which they are propagated:
• by air (through the air present in rooms)
• through structures

The physical parameters that influence transmission are:
• position: the distance between source and recipient
• the energy level of the source: acoustic and vibratory power of the source
• the transmission path: aerial and structural 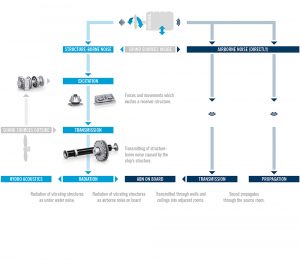 Trasmission of vibration and noise from the source by air and trought the structure.

What is the most important and complex source?
Unquestionably it is the endothermic propulsion engine. In the diesel engine, the explosion that makes the pistons move alternately generates the shaft revolution. This alternating movement is therefore turned into rotation by a crankshaft-rod system.

The alternating movement of the pistons, driven by the combustion gases expansion, accelerates and then suddenly slows down and reverses direction, creating a push on the drive shaft, shaking the engine block. In other words, during the expansion phase, the combustion gases suddenly increase in pressure and push the piston, which is fired down like a bullet.

The generated force is transmitted to the crankshaft rod system, which supports and transmits it, as a torque on the crankshaft. The other pistons, however, can be in a compression phase (the phase before, when the piston is in the opposite position compared to the expansion phase) where the rod rather than receiving forces, is pushing the piston into the cylinder to compress the fresh, aspirated gases.

Every one of these sudden changes of the rod-piston groups direction and acceleration generates vibrations in the whole engine. To properly identify the dynamic forces, which have to be considered the vibrations source, we should take into account the complexity of the machine geometry of and the physical phenomena that may occur while it is working. The number of cylinders and the engine geometry determine the order of the vibration and classify the phenomenon described above from a vibrational point of view.

In the single-cylinder engine alternating movement, a variable force originated from the unbalanced masses at each revolution and another one owing to the combustion cycle having a period of two rotation (720 degrees) are generated. We will call the former a first-order vibration, and the latter a half-order vibration, according to the number of times the complete vibration cycle repeats during one shaft revolution. In the case of engines with more than one cylinder, N, the number of cylinders, will define the vibration orders: in this case, combustion will occur N/2 times during a complete rotation.

What about the other sources?
The engine is a very important, but not the only, cause of sound and vibrations on board. Let’s take a look at the other components of the propulsion system, focusing just on the main sources. The gear box, the reversing gear, that, creates a strain every time that the teeth meet each other. The frequency of the occurrences is thus determined by the number of teeth: in other words, the vibrations order will be equal to the engine’s rotational speed, multiplied by the number of teeth. The driveshaft does the same with an order that is equal to its number of revolutions. And finally, there is the propeller that produces forces with vibration order equal to the number of blades multiplied by the shaft’s rotational speed. 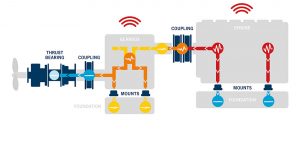 How do vibrations and noise spread?
So, if we look at the engine as a source, it transmits sound and vibrations to the recipient through the air and the structure. This latter path is more difficult to control from a vibro-acoustic point of view because it is less influenced by the reciprocal position of the source and recipient. 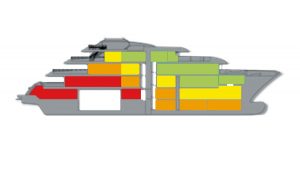 Sound pressure level in the various rooms on board caused by the transmission trought the structure and by air.

The source/sources excite the surrounding structure, making it vibrate, the structure transmits vibrations to the other surrounding structures, eithe reducing or increasing their amplitude. In other words, acoustic energy is transmitted through the structure and this is perceived as a sound and a vibration, often creating significant unpleasantness for the person experiencing it. Identifying the sources and establishing their characteristics are the first step in understanding our vibroacoustic discomfort cause. This preliminary review will enable us to tackle the next topics: transmission paths, then the systems to isolate vibrations and noise.