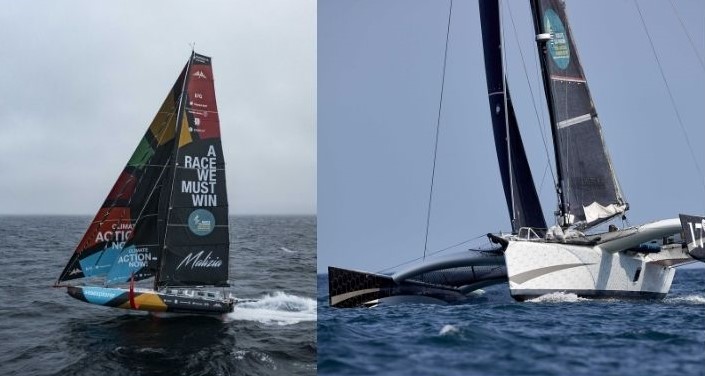 The countdown begins for the 138 sailors in full preparation to start the 12th solo transatlantic Route du Rhum. Destination Guadeloupe, the race will start on 6th November 2022 from Saint-Malo (France).

Among the participants will be two Yacht Club de Monaco members, Frenchman Oren Nataf on his trimaran Rayon Vert (Rhum Multi category) and German Boris Herrmann at the helm of his IMOCA Malizia-Seaexplorer.

“We are so proud to see two of our members competing in this prestigious solo transatlantic race, created in 1978 and held every four years. Both have a different approach: for Oren, an amateur, this will be his first solo transat, and for Boris, a professional skipper, it’s his second Rhum. Two different personalities but driven by the same passion and determination to complete the 3,543 nautical mile course and realise their dreams,” says Yacht Club de Monaco Vice-President Pierre Casiraghi.

The fleet will certainly be thinking about the famous Canadian sailor, Mike Birch, who passed away Wednesday 26th October. He won the first Route du Rhum in 1978 aboard his little 12m yellow multi-hull (Olympus). He pipped Frenchman Michel Malinovsky to the post by 98 seconds after 23 days of racing.

Winner of the IMOCA Championship 2018/2020, Boris Herrmann, along with Team Malizia co-founder Pierre Casiraghi, decided to continue the IMOCA adventure with a second five-year campaign, this time aboard the brand new Malizia-Seaexplorer, launched after an 18-month project, 5,000 design hours and 45,000 man hours to build, involving over 250 people.

It’s 41-year-old Boris’s second crack at the Route du Rhum which he finished in 5th place in 2018. This will be the first real test for Malizia-Seaexplorer. “Working with VPLP’s architects, we opted for softer, rounder hull lines and a curved bow. We also made the boat even more solid than the previous one and completely redesigned the ergonomics and living space,” explains Boris Herrmann.

First German to compete in a Mini-Transat in 2001 (11th place) and first German to start and finish the Vendée Globe (in 5th) 20 years later, he continues to throw himself into improving his performance, oceanography and his education mission. These are three themes dear to his heart that he shares with the Prince Albert II Foundation and YCM, two institutions presided by HSH Prince Albert II who again is right behind the sailor and very confident in this new IMOCA.

The Ocean Pack, a mini laboratory installed on the previous boat, is now set up on the new one. As keen as ever to raise public awareness of climate change, bearing a United Nations Sustainable Development Goals message with their slogan ‘A Race We Must Win – Climate Action Now’, Team Malizia continues to collect ocean data. This data, all the more valuable coming as it does from remote areas like the Southern Ocean, helps marine scientists understand and monitor the health of our oceans.

Oren Nataf: a first on a fast seaworthy boat

For 50-year-old Oren Nataf, who admits to being “totally amateur” but a competitive person at heart, this is his first Route du Rhum. “When something becomes a passion, I get totally caught up in it all, and in the end it’s better to finish at the front than behind. My first goal is to get Rayon Vert to the West Indies, by completing a “clean” race and having fun. The level in our category [Rhum Multi]) is particularly high this year with iconic offshore sailors taking part like Philippe Poupon, Roland Jourdain and Marc Guillemot,” says Oren who for the last three years has put all his energy into preparing this project. He is surrounded by experts with François Séruzier as project manager, Jean Saucet as preparer of his Pulsar 50, and his coach Sidney Gavinet, with whom he won the Drheam Cup scratch on 19th July earlier this year.

“I’m not an athlete, so have had to get into shape. I’ve been doing an hour of sport a day for three years. You have to sail as much as possible in different conditions in double-hander events at the beginning, then false solo and finally solo. Mental preparation is paramount. It’s 99% of the job. You have to knock down one by one those barriers we have inside, that block us and prevent us doing certain things.  And then you just got to go for it. It takes some courage as it’s not natural to go out to sea alone. But once you’re there it’s pure happiness. The hardest bit is leaving the quay!,” admits a man who can’t wait to leave the Corsair city of St Malo and set course for Guadeloupe.

Bernard d’Alessandri, Yacht Club de Monaco General Secretary, concludes: “All our very best wishes go with Oren and Boris who are such wonderful ambassadors for our Club, with the same sporting values and ambition to encourage youngsters into sailing vocations. Their commitment is part of our Monaco, Capital of Advanced Yachting approach”.