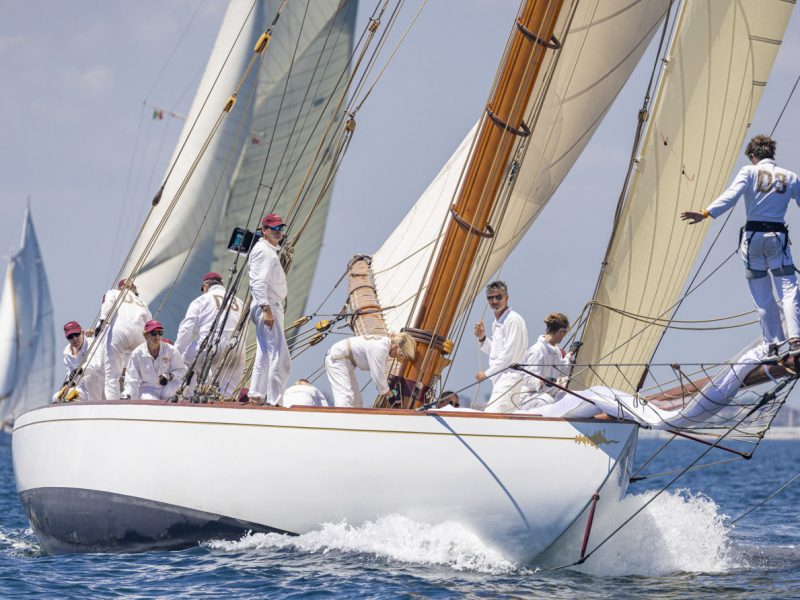 The three regattas, two on Saturday and one on Sunday, took place in the waters off the Lido and the public was able to admire the Tuiga and Mariska as they paraded through St Mark’s Basin before competing in a challenge that saw victory go to Mariska who, having started upwind, maintained her advantage right to the finish line. The event, promoted by Anna Licia Balzan, Honorary Consul of the Principality of Monaco in Venice, and the Tourism and Congress Directorate of the Principality of Monaco in Italy, saw Ciao Pais (1944) win among the Classic boats; Naïf (1973) won among the Vintage boats. Still among the Classics, but in Class 1, success went to Tuiga (1909), while among the Classics in Class 2 victory went to Capriccio (1970); among the Floats, first place went to Barcolana 50 (2018).

“For this ninth edition of the Trophy, we had the honour and privilege of having among the participants the Tuiga, which together with the Mariska created a unique challenge,” emphasises Anna Licia Balzan. “The commitment of Prince Albert II, who has always been active in promoting the protection of the planet, and in particular of the sea, was for me an example that I wanted to realise through sailing, which brings splendid boats and the most authentic seafaring fair play to the regatta course in perfect harmony with the extraordinary context offered by the Serenissima”.

The Trophy, which saw twenty-seven boats built between 1908 and 2000 lined up on the starting line, was organised in collaboration with Yacht Club Venezia and Circolo Velico Il Portodimare under the sports direction of Mirko Sguario and the patronage of AIVE, the Italian Vintage Sails Association. Chairman of the Race Committee Giancarlo Frizzarin assisted by Emilia Barbieri.

“This is a great satisfaction, this is a strong incentive to give the city an event in line with the objective that Venice must have to present itself to the world,” commented the President of the Venice Yacht Club, Mirko Sguario. “I consider it the first step on a ladder that we aim to climb in order to bring events of international stature to La Serenissima. Today we have hosted two of the four most beautiful and oldest boats in the world, in the future we want to bring all four to Venice. I would like to thank for the important support of the Venice City Council represented here by Francesca Rogliani, Fabrizio D’Oria and Nicola Catullo of Vela Spa, Admiral Piero Pellizzari, the Police Force, and all those who, moved by their passion for the sea, have stood by our side and contributed to the success of this event’.

The event concluded in the Arsenale. The prizes were realised by Giancarlo Signoretto, a renowned exponent of Murano glass art, and his assistant, Agnese Tegon, the only woman to have given an important twist to a tradition handed down over 1000 years. The prize for the runner-up in the Tuiga vs Mariska match race was instead made by the Murano glassworks CAM.

“BNL BNP Paribas Wealth Management,” said Isabella Fumagalli, Director of the Private Banking & Wealth Management Division, “has once again this year been the main partner of the 9th Principality of Monaco Trophy, aware of the cultural and economic value of this event, which exalts the strong maritime tradition of Venice and Italy in general. A tradition from which, in this field as in others, derives the value and quality of Italian knowledge, skill and art, now recognised worldwide’.