Tofinou 12. A CLASSIC WITH A BIT OF ZIP 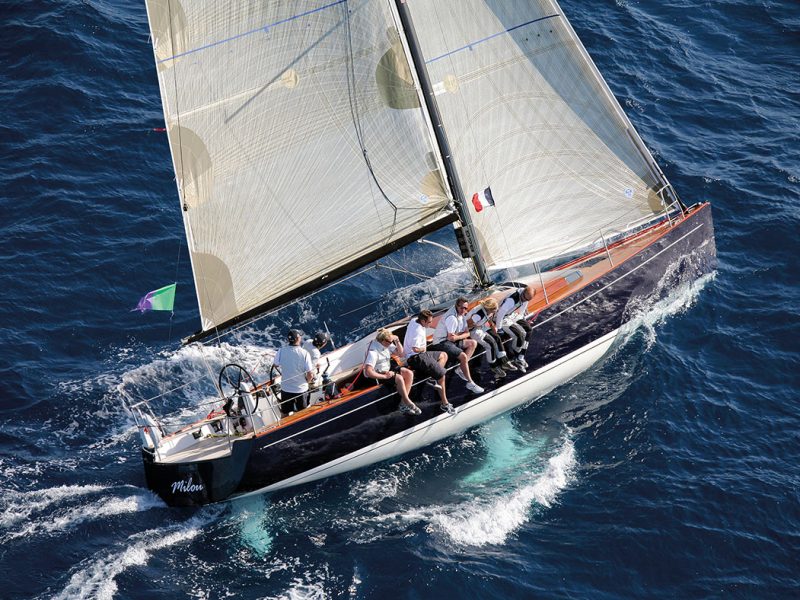 Small and well ordered. Not a lot of people, twenty-five in total, and each of them gives the feeling that they know what to do. Latitude’s base in La Rochelle reminds me of my daughter when she plays with her doll’s house. Everything has to be in the right place, and there is trouble in store for anyone who moves anything. The production doesn’t exceed twenty boats a year.

They are all day sailers from 7 to 16 meters. The smaller boats are hand laminated, while from ten meters up, they use resin infusion with the deck in teak and the deckhouse in mahogany which can be taken down to make maintenance easier. While I go from one department to another, I only meet pleasant people, everyone greets me and smiles. Zero stress, they are all craftsmen on the job. They are calm and precise, not frenetic like a production line. It feels as if you are going back in time here.

Outside these walls, the international nautical industry wants to make boats that are bigger and more striking. But here they still make boats on a human scale, in which every detail is carefully attended to. They are made to last, and above all to sail well, not just to catch the eye when moored at the quay.

The Tofinous are day sailers for people who love classic boats. They have to sail fast, perhaps without much wind, but they are made for people who can’t bring themselves to give up looking at wood, above and below decks. All in all, they provide both aesthetics and performance.

When I take the wheel the first thing that I notice is that the steering is never hard. It is a good compromise between sensitivity and comfort. We are sailing close-hauled, with the wind varying between eleven and twelve knots, and Tofinou 12 behaves extraordinarily well. It picks up, accelerates and sails between 7 and 8 knots, according to which angle we choose. Even moving away from the wind, the performance was more than sufficient. 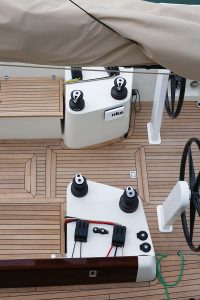 The wind died down a bit when we were on a broad reach, but despite that the boat did over six knots. Quick, although not excessively so. The jib is self-tacking, and if you want it, attached to a furler, there is also a Code 0. All the rigging can be controlled from the cockpit, with sheets and halyards running underneath the mahogany that covers the deckhouse. There is a split backstay and the mainsail track is close to the two wheels.

The winches are also located there, in a position which is both comfortable for the helmsman and for those who are sitting on the cockpit benches. There is actually a kind of small island in glass fibre which houses winches and stoppers just before the end of the benches. That is a solution which means anybody onboard can easily access the rigging and controls. Also, and still close to the winches, part of the bench surface in the cockpit opens and there are two compartments inside. They are there to house unused sheets and halyards, so as to keep the deck clear. The engine is in line with the performance under sail, so it gives enough push. It is a 29 hp Nanni Diesel.

At top speed we did over seven knots, and when cruising you can choose to go at between five and six. The boat measures twelve metres, but it is nevertheless a day sailer, although that doesn’t mean that it lacks space below decks. There are four berths: two right in the bows, where there is a V-shaped berth, and two more – one in each cabin – in the stern. Even in these areas the headroom is sufficient, in part because of the fact that only the end part of the cockpit benches has been used as a locker. The fittings are extensive, but not too much. 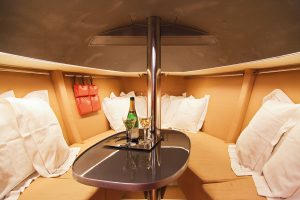 The berths, for example, are single beds, so not all of the stern cabin space is taken up by them. In the dinette the headroom is one metre sixty centimetres and, as well as the V-shaped berth, there are two small couches, one on each side. So, you can sleep below decks , but also cook and relax in the dinette. It is essentially a boat made for sailing without problems which can take four people for a weekend. What else could you want?