The FortyTwo, thesis and antithesis 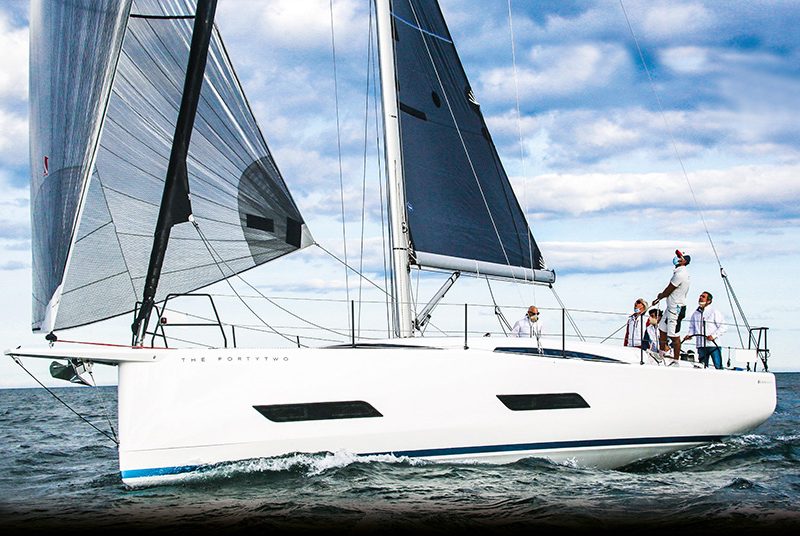 Nothing is more profound than what appears on the surface. The thinking of the German philosopher Georg Wilhelm Hegel inspired Giovanni Ceccarelli in the design for Eleva Yachts’ latest model, providing a thesis, antithesis and synthesis of modern sailing

SAILING IS NOT LIKE MULTIPLICATION: IF YOU CHANGE THE ORDER OF THE FACTORS, YOU END UP WITH A SUBSTANTIALLY DIFFERENT RESULT. Once again, this design from Eleva Yachts comes from the pencil of Giovanni Ceccarelli, a designer who it is hard to imagine creating a boat that prioritises cruising and comfort. His CV is undeniably impressive, with races, America’s Cup regattas and competitions of all types to his name, both as a sailor and as a designer. Easy sailing for him does not mean comfort, it means performance and fun at the helm, perhaps without making life too complicated, but ultimately always aiming for speed.

The second model from Eleva Yachts, The FortyTwo, which comes four years after The Fifty, also designed by Ceccarelli, epitomises this philosophy. Frightened of steering wheels? You can do without them if you want, but The FortyTwo has them. And you can choose a self-tacking jib and a traditional mainsail if you want to, but the boat is still all about the sails, designed to travel quickly, with a traditional genoa and square-top mainsail. 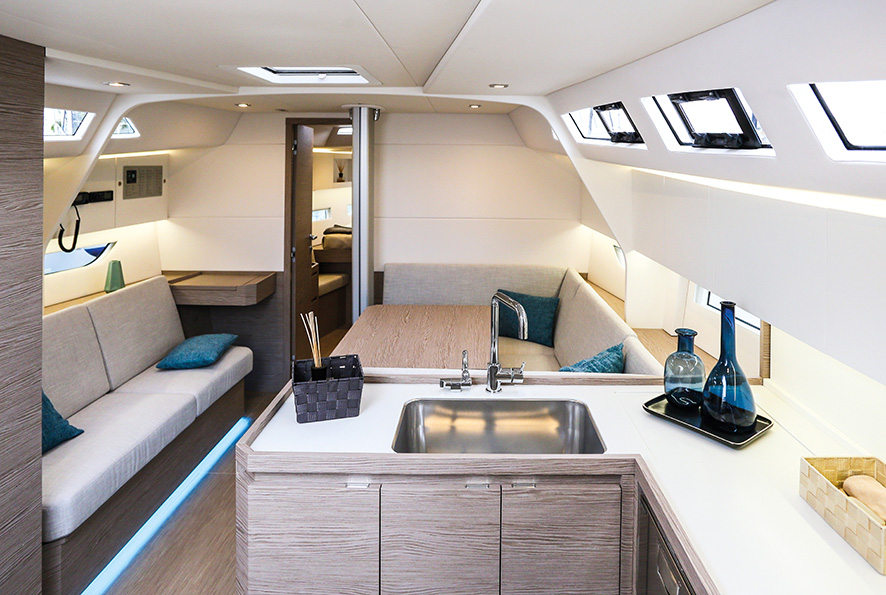 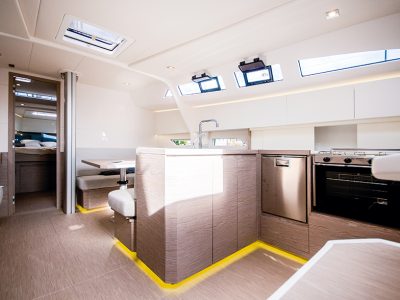 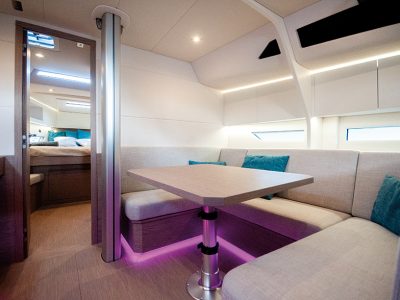 The boat is spacious inside, meaning it can easily be used for cruising by the owner and their guests.

The equipment on deck matches the easy sailing philosophy too. There is a mainsheet traveller if you want to use it, otherwise, you can make your life easier by leaving the boom sheet in the centre. Essentially, easy sailing is a philosophy embraced by owners who love using their sails, who want to have fun and are not afraid of a few manoeuvres. And different owners interpret the Ceccarelli philosophy in different ways.

Just like Georg Wilhelm Hegel, who inspired both Left and Right Hegelianism, The FortyTwo is also designed both for racers and for those who love to cruise fast. Indeed, there is also an Ocean version, which is less ‘stripped-back’ than the Mediterranean version. There are no steering wheels, but instead, there is a double backstay, a traveller for the self-tacking jib and a rollbar to which the mainsheet traveller can be fastened, so it doesn’t divide the cockpit in two. 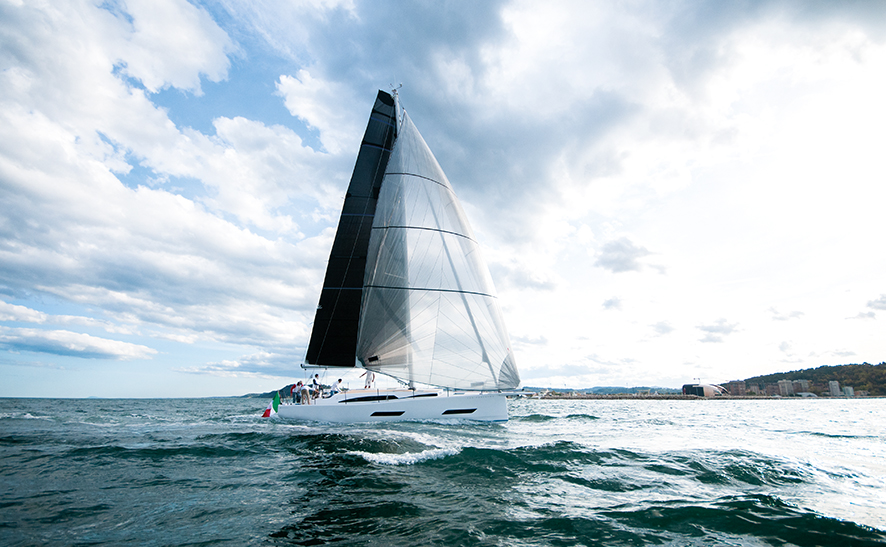 Eleva’s The FortyTwo is therefore ideal both for those who want to race and those who want to cruise, but without compromising on speed. The conditions awaiting us in Pesaro are not particularly promising. There is little wind, but we head optimistically towards the open sea, hoping to find some.

In the meantime, it gives us the chance to test the boat’s performance under engine power. The compartment contains the owner’s choice of engine, a 60 hp Volvo Penta D2, which provides a higher level of power than the standard 40 hp for the Mediterranean version and 50 hp for the Ocean. There is a lot of thrusts – we manage to exceed 10 knots at top speed, and you can easily surpass 9 knots at cruising speed – yet noise levels in the stern cabin, which is directly in contact with the engine compartment, are very low, at around 70 dBA, proof of successful soundproofing. 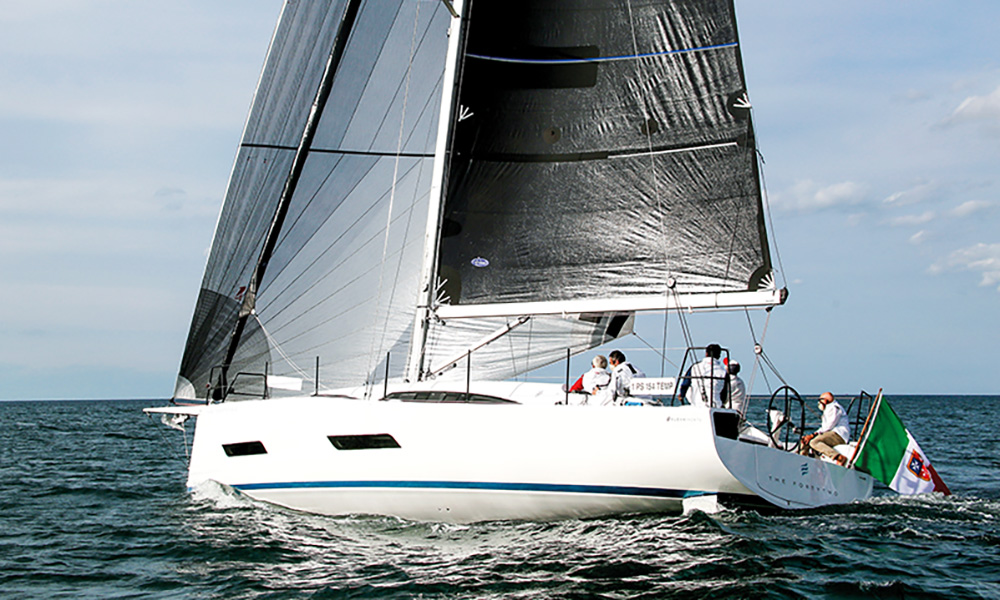 Our patience finally pays off, and the wind arrives, although it’s not exactly strong. Nevertheless, the boat accelerates as soon as we feel a breath of wind. It only takes a few knots, and as the wind strengthens, the acceleration continues. The boat feels great at the helm – it is very responsive and smooth, in part thanks to a system featuring a sort of small traveller and two guys for use with the Jefa Steering wheels. Everything also seems very well designed when it comes to handling. Ceccarelli tells us that he spent a long time researching the shape of the two rudders, aiming to enhance the manoeuvrability without increasing friction and therefore reducing performance. Sailing is easy, but also exhilarating. A breath of wind is enough for the boat to pick up the pace. The two-wheel system is excellent, making steering comfortable yet accurate.

This again seems to have been the right choice: although we are not experts, The FortyTwo seems easy to manage at the helm. The Code 0 mounted on the dolphin striker at the bow, ready to be unfurled at any moment, is very handy. In the end, despite the rather tame wind, we managed to surpass seven knots at the two moments when the wind speed picked up. It happened while we were sailing at an angle of 75° with just the mainsails, and then at 105° with the Code 0. I feel that a 7-10 knots wind is enough for genuinely exciting performance under sail: with that wind strength, you could be sure of enjoying the sailing and confidence it is worth hoisting the sails. The thing I most appreciated about the deck was the original stowage solutions. 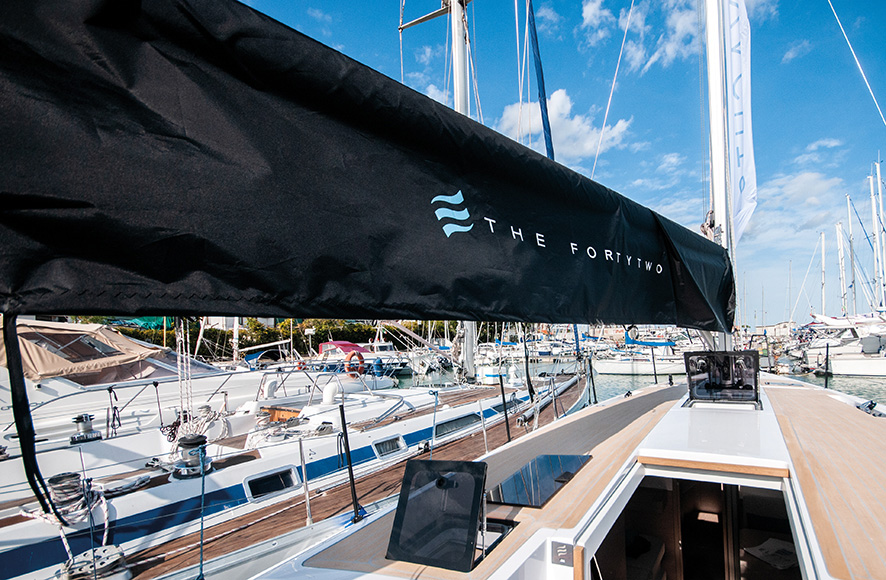 The potential for manoeuvring has not been removed, merely hidden. There is everything here you need to travel quickly, and even race.

There are no lockers under the cockpit benches, making the cabins at the stern more spacious. Also, the bases of these benches are completely transparent, providing an exceptional amount of natural light to these two rooms at the stern. The storage space is instead found in a very deep sail locker at the extreme bow, and in a large locker accessed from the floor of the cockpit. The only design choice that is not overly convincing is the height of the cockpit wall, which is rather small, and therefore a little uncomfortable when you lean your back against it.

Ceccarelli has paid a great deal of attention to the amount of natural light that reaches the area below deck. 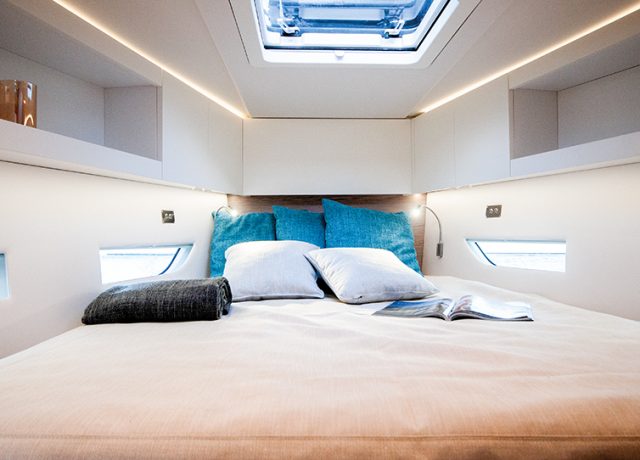 The interiors are available in several different versions. The one we tried has the traditional layout, with three cabins and two heads. As well as the two stern cabins, with plenty of natural light and headroom, the master suite at the bow is also impressive, bathed in light both from the portholes along the sides and a sort of ‘strip’ of windows at the foremost part of the deckhouse. The boat feels spacious – and it is – but yet it weighs only 7,500 kg, and so provides the room required for cruising without compromising the performance under sail. 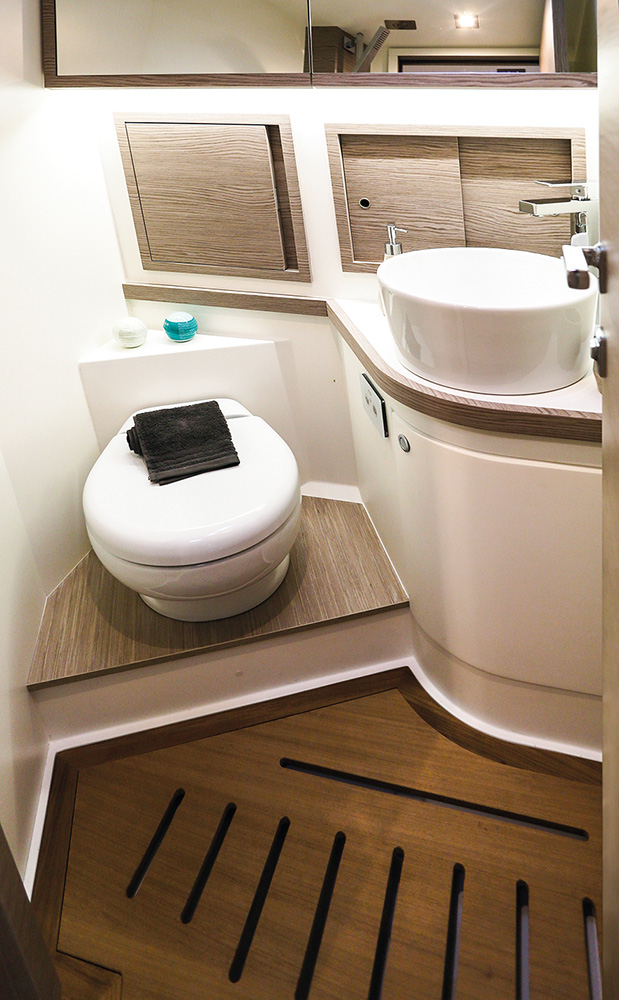