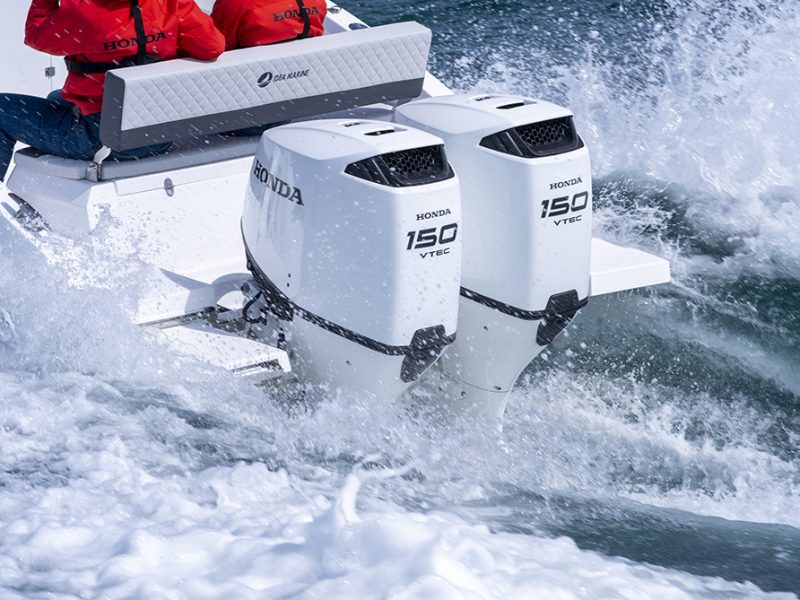 Changes to the electronics to improve performance. The restyling of the 150 gives us an engine with more torque and even lower fuel consumption

The future may be electric, as many claims, but the present is electronic. This is demonstrated by Honda’s new BF150. Engine block and mechanical part unchanged, but, thanks to electronics, there is a more favourable torque ratio and, in general, better performance. The new electronic control unit, the same one used for the 250 horsepower, which was revised only a couple of years ago, allows a completely different torque delivery. The engine is smoother, especially at low revs. Basically, it pushes faster and more. And it’s all thanks to the new ECU alone. Basically, it’s the electronics that allow for more power delivery.

The engine block is still the same, the BF150 is an inline four-cylinder, so it has relatively simple mechanics and that’s also why the new control unit was able to significantly improve performance. Practically all the technology of the more powerful models has been transferred to the new 150, such as, for example, the drive by wire, the throttles and the instrument to be installed on the dashboard that provides all the information about the engine.

A lot of attention is also paid to maintenance: changing spark plugs, including the fourth one or the filter has become easier and faster.

New control unit, but also drive by wire, throttle and dashboard instrument. The restyling of the BF150 was done to optimise performance.

The graphics of the display have also been revised to immediately show when ECOmo is activated. As we know, this is a lean carburetion system that Honda outboards are equipped with and which further reduces fuel consumption in the mid-range, particularly between 2500 and 4500 rpm. The new instrument shows a sort of green frame to indicate the range in which ECOmo is active. In this way, those at the helm will know whether they are cruising at the best speed to optimise consumption and speed. 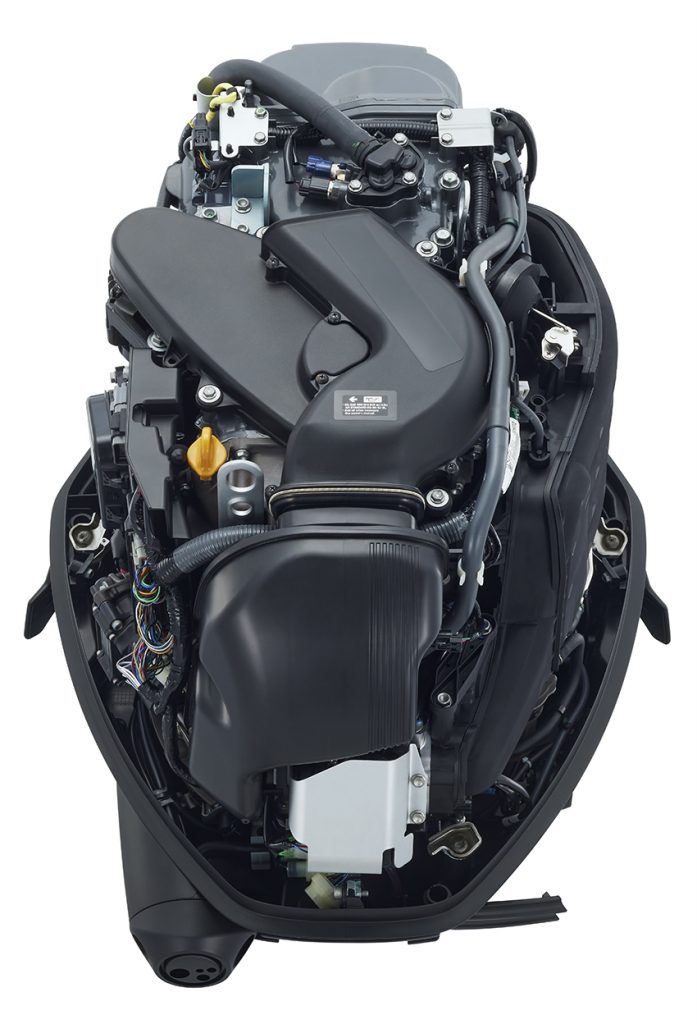 ECOmo operates between 2000 and 4500 rpm and, especially at these revs, the BF150 is very fuel-efficient. 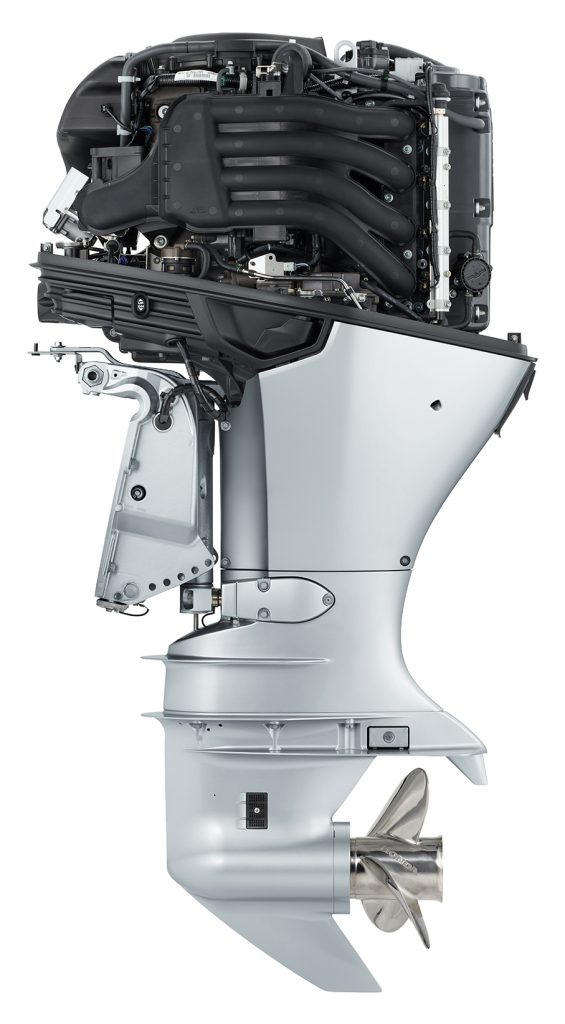 The restyling of the BF150 also focused on physical as well as electronic aspects. For example, the intake grille on the radiator grille has been changed to improve ventilation, and a new filter unit has been added outside the throttle body. The filters have been reduced, in the sense that instead of being two, as was the case with the old engine, i.e. a low-pressure filter and a water separator, these two functions are now combined in a single filter. The goal of Honda engineers is to simplify maintenance. Now, it is not necessary to dismantle the engine to remove the trim bracket, and this can be done in a few minutes instead of several hours. But the most significant change in simplifying routine maintenance concerns spark plugs.

On the old 150, changing the fourth spark plug took at least 40 minutes because you had to completely disassemble the bowls. On the new outboard, on the other hand, all you have to do is remove the grille. In this case, too, maintenance goes from tens of minutes to just a few moments. And last but not least, the design and colours have changed. The BF150 is available in three colours: classic grey, total white and sporty white. 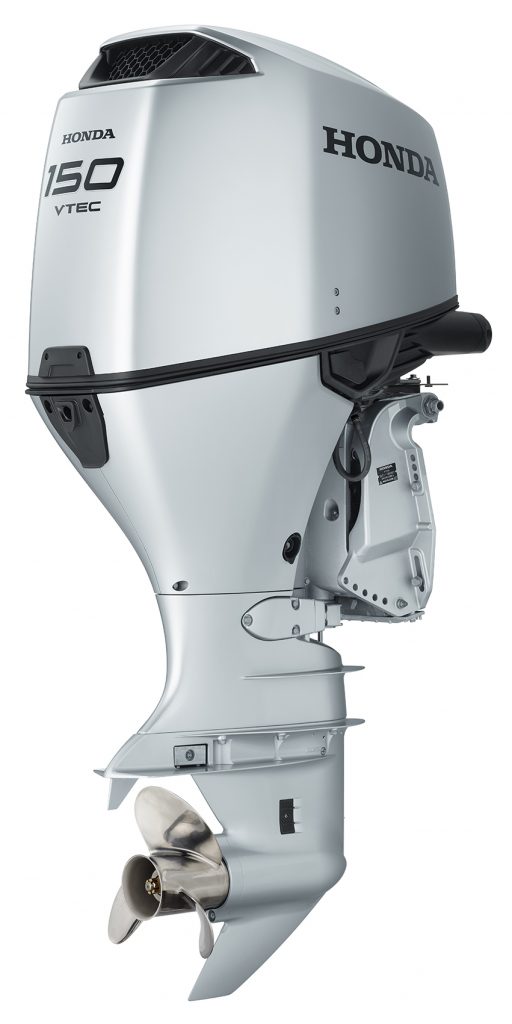 For our test, we had the chance to put it to the test both in single mode, on the Altamarea 23 dinghy, and in double mode, on Idea 80 by Idea Marine. The “electronic” thrust makes itself felt because, for example, with the dinghy it takes less than ten knots of speed to glide along. With the double installation on the Idea 80, the minimum glide is only slightly higher, at 11.4 knots. Fuel consumption is even more surprising than one might expect. As an example, you can cruise at 20 knots with just one litre per mile and even at maximum speed of 36.7 knots, the litres per mile are only one and a half. In displacement, it’s even under a litre. And low fuel consumption also means plenty of range. These days, with the price of petrol rising like bread before it goes into the oven, keeping fuel consumption down is imperative. I’m also thinking of people who use outboards on dinghies or charter boats, not just owners. If the engine consumes as much as it does, you run the risk this summer that the cost of renting is less than the cost of refuelling. 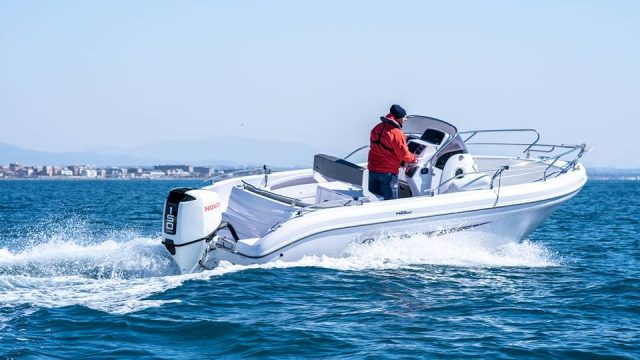 Between 17 and 22 knots of speed, you are sailing at a mere one litre per mile. 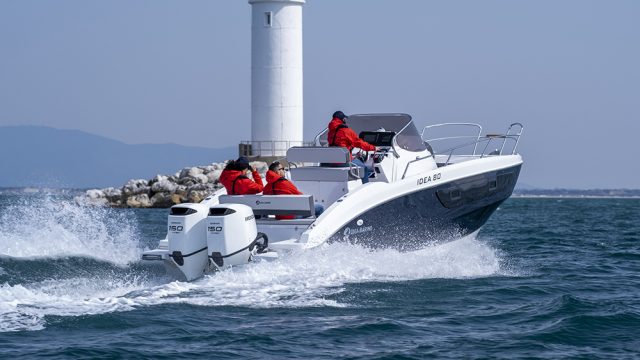