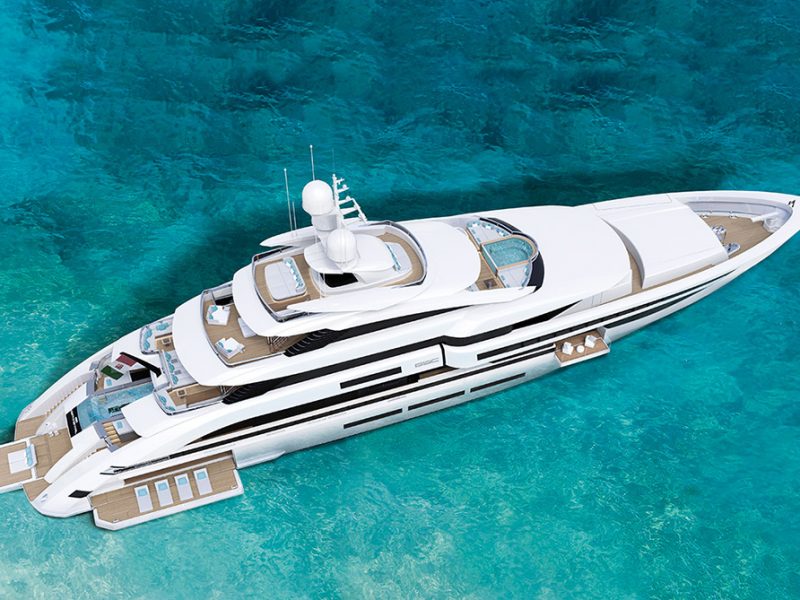 Enrico Gobbi from Team for Design has designed a 65-metre long version of the Continental range of yachts for Isa, with dynamic, curved lines that give the superstructure a harmonious, slender appearance

LOOKING AT THE DESIGN FOR THE 65-METRE CONTI-NENTAL THAT ENRICO GOBBI has created for the Isa shipyard in Ancona, one can’t help but ponder the meaning of beauty, a bit like the director Valerio Jalongo did in his film The Sense of Beauty, where he chose to capture something that is by definition impalpable and intangible.

Using a film camera to explore the wonders concealed by the infinite expanse of the cosmos and its impenetrable secrets echoes the man who seeks to uncover them with the help of his tools, delving into their most intimate part – their elementary particles. 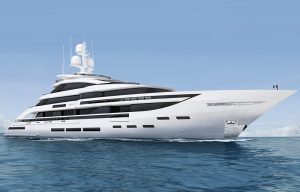 If you haven’t witnessed a yacht being built, you wouldn’t believe that an object of such beauty stems from the work of engineers, designers, technicians, and carpenters who, brimming with enthusiasm and passion, turn ideas into something that appears timeless and out of this world.

The Continental 65 will have a steel hull and aluminium superstructure. Its shape will be more sinuous than the 80-metre version, making it seem longer and more dynamic. The stern is very imposing – the structure rises all the way to the upper deck, giving a more slender feel to the yacht’s vertical profile. The large square windows, a typical feature of the Continental range, will flood the interiors with natural light. 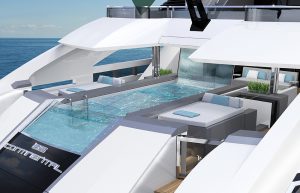 The rectangular pool stretches along the length of the deck, and ends at the stern with a single glass containment wall, while the opposite wall extends vertically up to the canopy above, providing the backdrop to a waterfall that separates the pool from the rest of the living space. This layout provides space for sunbeds and transforms this part of the main deck into an extension to the real beach club on the lower deck. The beach club includes a SPA, complete with sauna and massage room, as well as the living area and bar, where the atmosphere is heightened by a very picturesque lighting system. When closed, the transom door is highlighted by a black trapezoid, which, as well as the boat’s name, also houses the windows that provide natural light for the inside spaces. 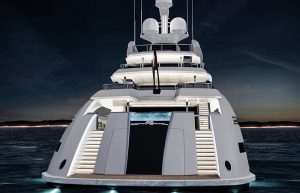