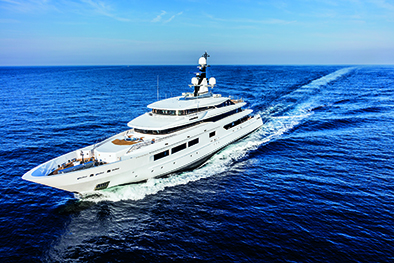 Thanks to its determination and the financial solvency Tankoa has accomplished its first large yacht. Suerte has been well embraced for its building quality...

Thanks to its determination and the financial solvency Tankoa has accomplished its first large yacht. Suerte has been well embraced for its building quality and the interesting design solutions, both internal and external

THE HULL C101-TANKOA S65/11 LEFT THE CESIS YARDS IN CARRARA on 9th November at dawn: the extraordinary road transport, managed and coordinated by the Fagioli company, a leader in this field, was carried out with self-leveling trolleys. Once it arrived at Marina di Massa harbor it was boarded on a platform together with the superstructure of the C102 and on 12th November it reached Genova Sestri Ponente towed by two tugs. In the following days the main engines were boarded and the superstructure, built by the RYS of the Conte&Viani group was assembled. Then the hull was placed inside a heat conditioned warehouse of the yard and between late December 2009 and early January 2010 the first stages of the setting up began. I found this text in my archive.

I had visited the yard several times appreciating the spirit and vision, dedicating space and attention in the magazine I managed at that time. Unfortunately the crisis had later stopped the progress of works and only in 2014, when a buyer was found, the work on nr.1 was successfully finished. Suerte was displayed at the last Monaco Yacht Show where it had a lot of positive opinions about its building quality, style and the interesting solutions of the layout. Paszkowski was responsible for the exteriors and, together with Margherita Casprini, for the interiors too. As a whole it’s characterized by sober lines yet, as they say, timeless.

The yacht has a nice slender bow and an inclined stern to which about 4 meters was added compared to the original project that increased from 65 to over 69 m, giving greater impetus to the hull and more space to the beach club. From the outset the high quality of performance and installations has been the key point of the project. When you climb on board, you will notice that premises and promises have been complied with. «We have chosen the best of the best, – Edoardo Ratti says proudly; – our quality references are always large construction projects in northern Europe and our product has nothing to envy to the best».

The Dutch company Intersonat was instructed to implement the attenuation of vibrations and noise transmission. The interiors have been mounted on structures separate from the main and lined with sound absorbent materials to further reduce noise and pollution, while the motor’s dry discharges were carried on the sun deck, hidden in the central column of the radar. Suerte’s specifications are a feather in the cap for the ship yard, as is the large and well organised machine room. In any case even the ”small things”, the details and function of the various dashboard instruments make the difference and transmit the understanding and appreciation for the shipyard’s commitment in building a great yacht.

The layout is unique. Entrance to the main hall through two sliding side windows opening on the exterior corridors, consequently the stern of the glazed saloon was used to create a cozy and intimate living room corner adjacent to a bar area dominated by a sophisticated deck design similar to the wing of an airplane. The big main lobby from the stairs’ starting point is located near the bow and one of the two lifts and leads to the guests’ night zone. An essential galley was constructed on the lower deck, entirely reserved for the accommodation of the crew and various utility rooms. Two side doors facilitate loading supplies in the proximity of refrigerators and pantry. As on the main deck, the convivial aft area was divided into various rooms rather than in a single large room.The big engine exhaust pipe passes through the deck in a technical compartment whose volume was used as a room divider and skillfully integrated in the layout.

The sliding panels divide the wide saloon into two or three rooms with a sushi bar to the left and a sitting room to starboard which can also be used as an extra cabin with private bathroom. The central part of the saloon is illuminated from above by eight portholes made on the bottom of the big swimming pool that is on the bridge deck. The effect is very appealing. The far end of the large terrace is made to accommodate an helicopter in touch-and- go mode but is also the ideal space for a crowded party or a discotheque. There is also a gym inside, besides the wheelhouse and the captain’s cabin, from which one can climb to the highest point of the yacht: a small terrace with a breath-taking view from which to admire the landscape in peace. Our quick visit ends by descending to the lower deck where the beach club offers spacious and elegant spaces to relax before or after having bath as well as a sauna, turkish bath and massage room. A small folding balcony opens on both sides of the beach club. If the weather is bad, glass doors close the beach club at the stern, transforming it into a panoramic sea view lounge.

The sea trial results were up to the highest expectations. With a load of about 70% of the total the two Caterpillar 3516 B DITA-SCAC HD engines of 2,450 hp each have driven the yacht at a top speed of more than 18 knots compared with the estimated one of 16.5 knots with half load. Cruising at 14 knots the range is of about 5,000 nautical miles. The yard, which even in the most difficult years has not thrown in the towel, was rewarded for perseverance and today it has new contracts and many new interesting projects. The works on the Tankoa S701 (with the same naval platform as Suerte) have resumed and a 50 meter long, the Tankoa S501, commissioned in January 2015, is under construction at the yards in Genoa Sestri Ponente. The yard can build every kind of yacht in steel or aluminium and it has set up four main naval platforms: TP One, for yachts of 47 up to 50 meters long, 9.40m wide up to 700 GT; TP Two, for yachts in a range of 58/62 meters long and 11 m wide, with a tonnage of about 900 GT; TP Three, for semi-custom yachts of about 70/75 meters long and a tonnage between 1350 and 1,900 GT (Suerte belongs to this series); TP Four, for yachts of 80/90m and a tonnage between 2,150 and 3,000 GT.

A QUESTION OF STUCCO
Boero YachtCoatings, chosen by Tankoa Yachts as their technical consulting partner, supplied the epoxy products for MY Suerte – S693. The Epolight Win epoxy stucco plays a very important role. Thanks to its great flexibility and low specific weight, it provides a perfect stucco that doesn’t crack or alter the projected weight called for in the original plans. It is estimated that over 20,000 liters of Epolight Win will be needed for the 693, and another 2,000 liters of Epomar, the epoxy stucco coating called for in the Boero YachtCoatings cycle dedicated to the Super Yacht. Applying these products guarantees the uniformity and homogeneity of the treated surfaces, getting them ready for the successive painting phase.