Sunseeker Manhattan 55, the cruise is served 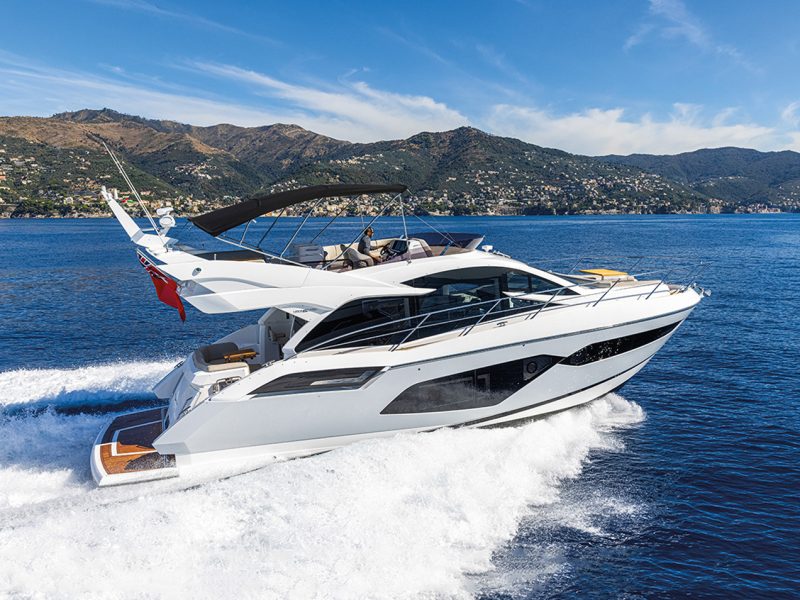 Improving what was already the best of the range wasn’t the easiest of challenges. The Manhattan 55 has been launched to replace the 52, the record-setting model from the yard based in Poole with more than 130 units produced in three years. In other words, their task was to modify what at that time was the British fly-deck boat par excellence. Their approach to this problem was the most logical one – find out what owners had to say, and work out what to improve. Which details needed refining? Which were the strong points to leave alone? The shape of the hull was one of the untouchable items: it was already soft, quick and held the sea well, and had earned the love of demanding British sailors – as well as others. 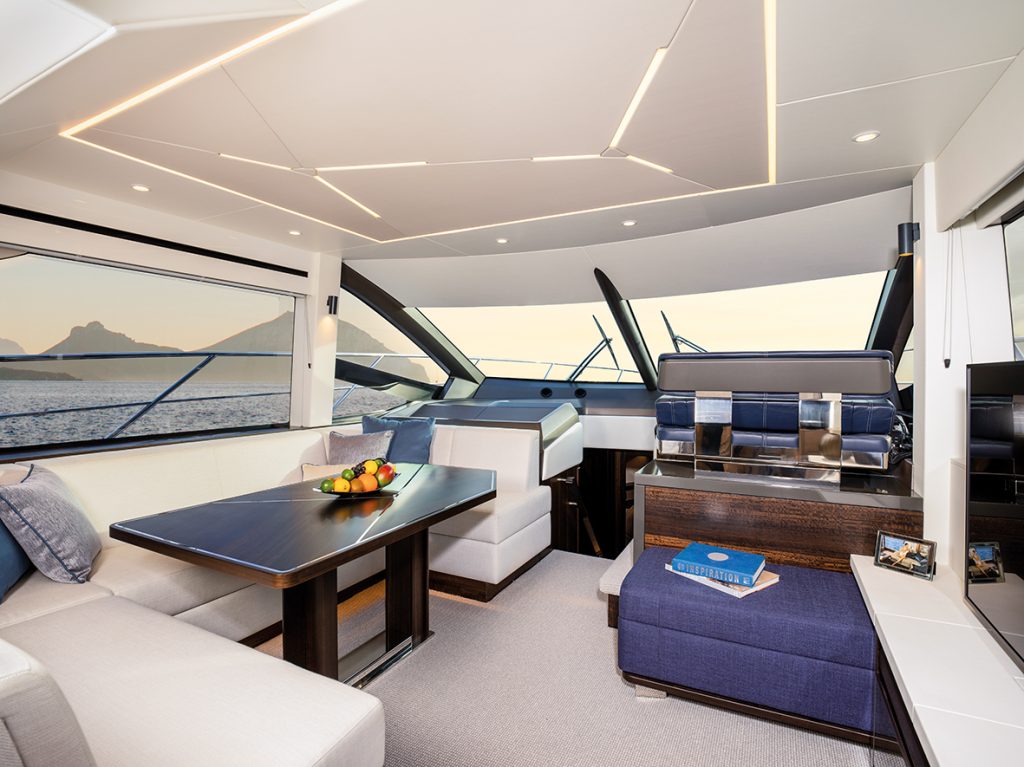 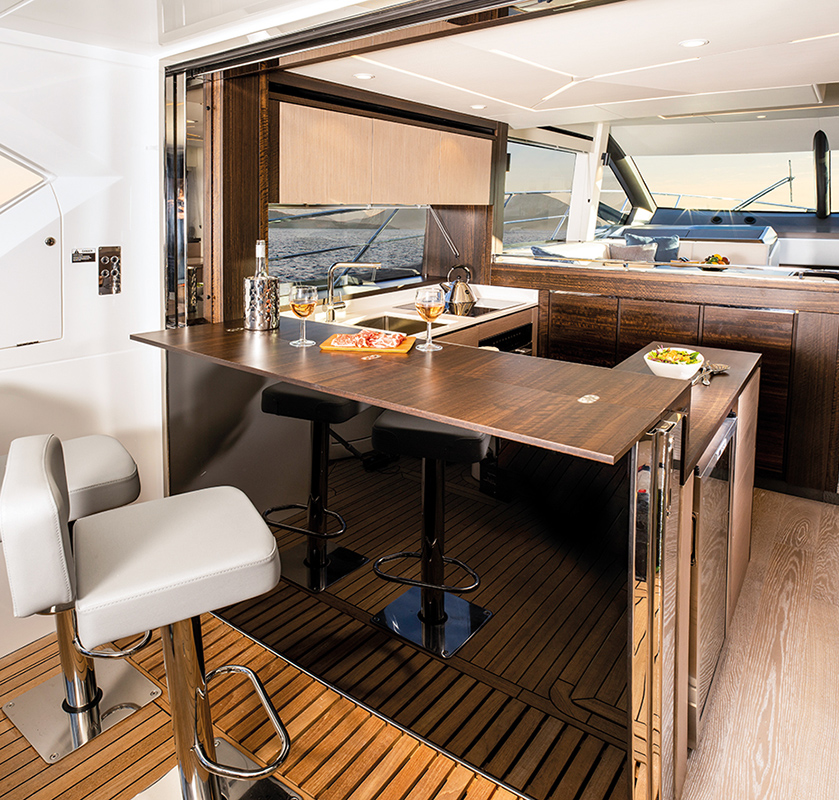 There are so many customisation options, all contemporary and elegant, and also luminous and well connected in the sense of how the interior and exterior are linked.

The update has now arrived, with a series of details concerning both the external look and the interior set-ups. On the outside, there are new inserts in stainless steel and carbon fibre, a different design for the air intakes and the T-Top. But it is inside that you find the most obvious changes: aboard you get the feeling of being on a completely different boat from its predecessor. The range of materials to choose from and the interior décor has increased: you can go for Brushed Wengé, Walnut, Smoked Eucalyptus or Silver Oak finishes, or even a combination of these woods like on the boat we tried, which was a mix of eucalyptus and oak. 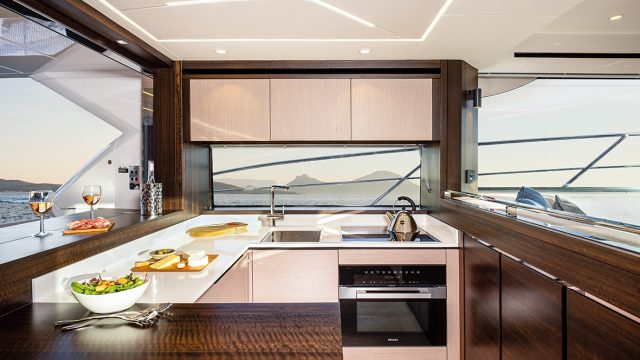 So, there are so many customisation options, all contemporary and elegant, and also luminous and well connected in the sense of how the interior and exterior are linked. Light is provided by both natural and artificial sources, so the large side windows, and also from updated ceiling LEDs with their extremely appealing geometric shape. Inter-connectivity is mainly the product of the design choice between the cockpit and the central lounge.

There is just a bar counter that divides them, looking onto the kitchen that is located in the aft-most area of the lounge. When you need to close yourself up inside, all you need to do is raise the glass that slides away inside the bar and close the door. The outcome is a triumph of functionality, with a classic dining room/saloon in the middle of the lounge, which is perfect when the weather conditions mean you should stay inside, and a kitchen/cockpit area that will be the centre of all life on classic summer cruising days. Additionally, the double-side staircase leads straight to the stern platform, which you can also have in a version that lowers into the water. 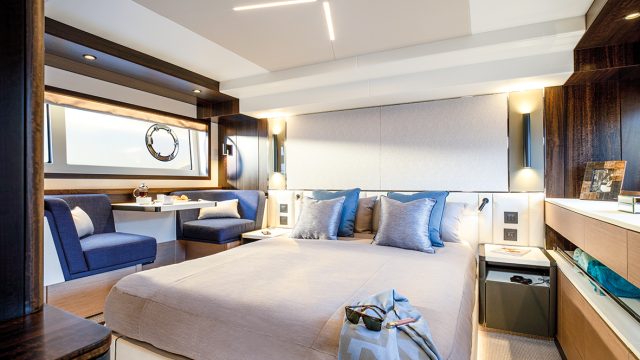 There are six berths in total for guests in addition to the double room for the owners and the VIP cabin in the bow, there is a third amidships, which has twin beds. And there is also the one for the crew, right in the stern which is accessed from the swimming platform. 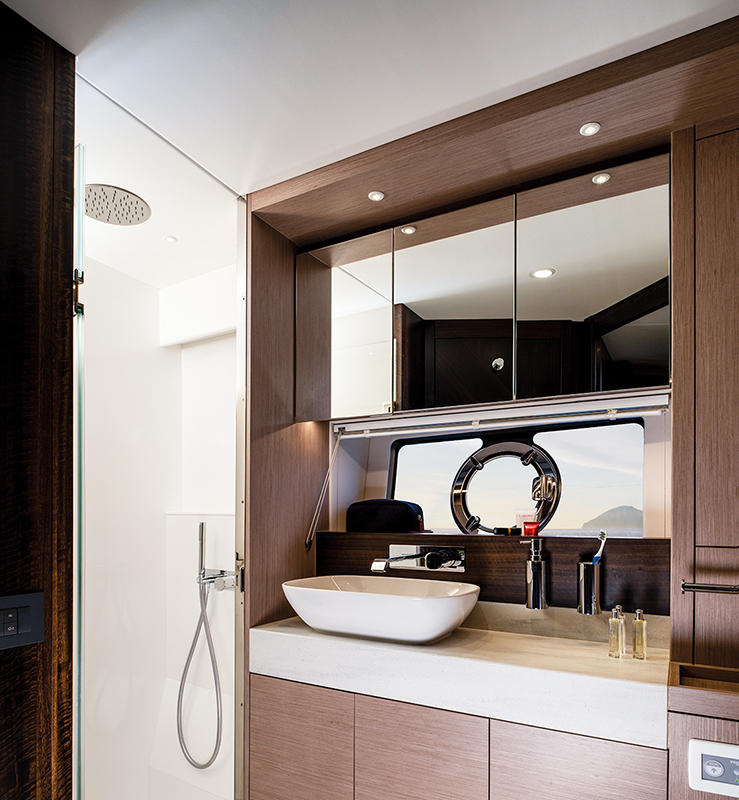 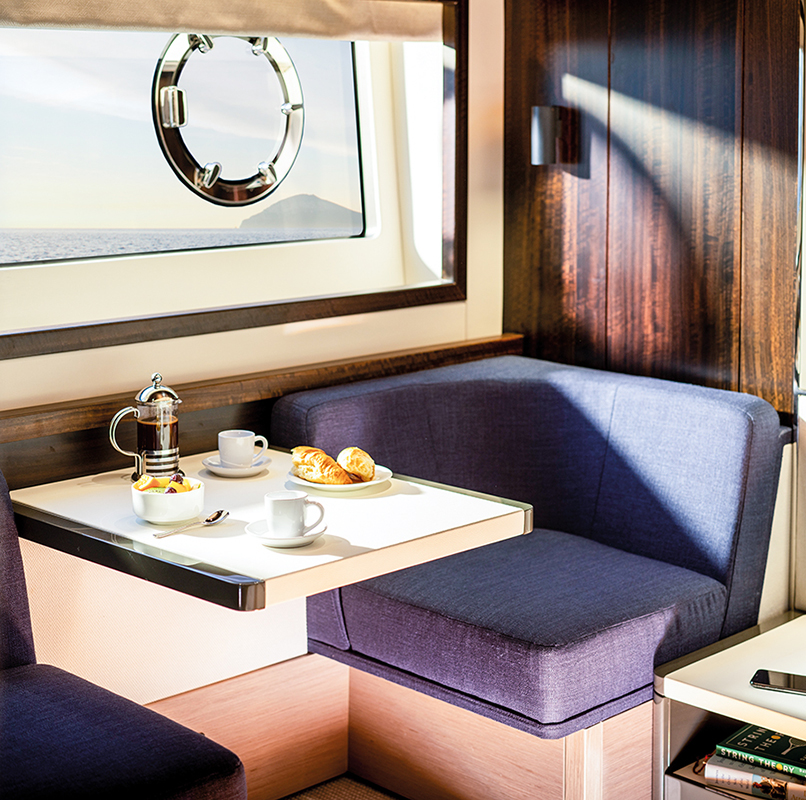 THE FULL-BEAM MASTER CABIN CAN BE ARRANGED WITH THREE SET-UPS, WITH A CHAISE LONGUE, A BREAKFAST TABLE, OR AN EXTRA PIECE OF FURNITURE FOR CLOTHES AND LUGGAGE.

As far as sailing is concerned, it is on the quality of its hulls that Sunseeker has built a large part of its success, and once again it doesn’t disappoint. The Manhattan 55 isn’t a sports boat, but it is nice to helm because of the precise way it holds course and the way it reacts when turning.

The boat that we tried had shaft drive transmissions linked to two Volvo Penta D13s each developing 800 horsepower (but you can also go for IPS 950s), a classic approach much favoured by clients at the English yard, and which delivers some very interesting performance figures: 31 knots top speed and above all a spectacular economy cruising rate of 24 knots, using 8.8 litres per nautical mile and delivering a range that touches 250 miles and great comfort underway. 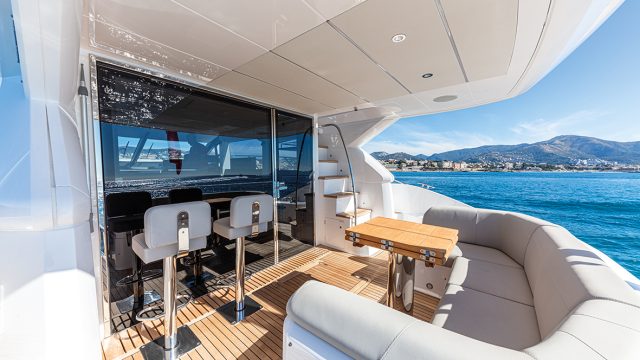 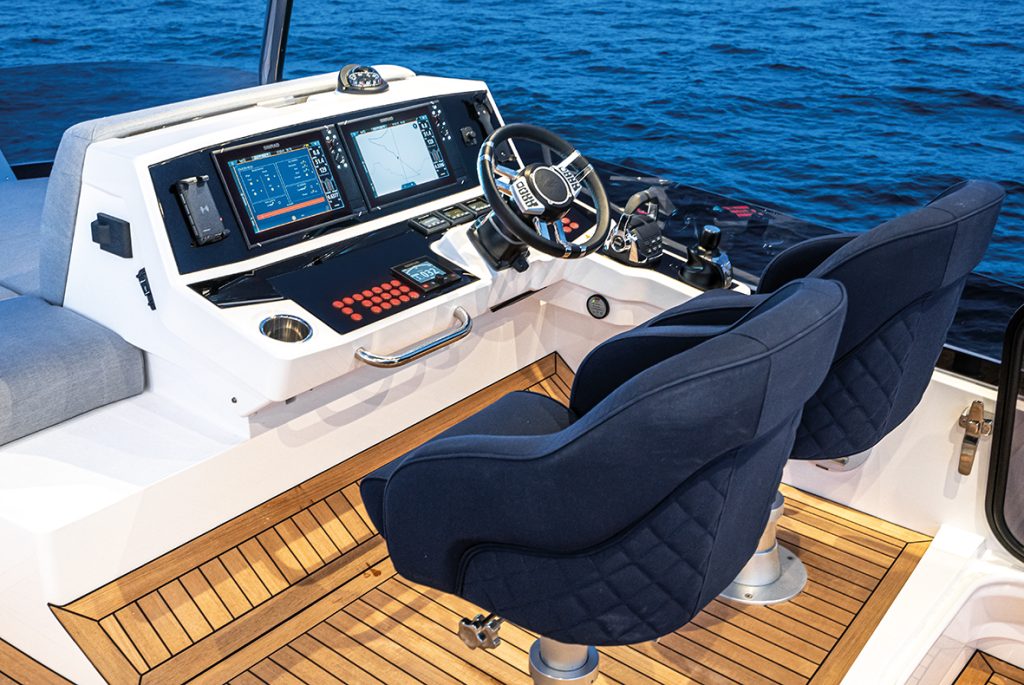 «FOR ITS EXTERNAL LINES, THE MANHATTAN 55 TAKES AS ITS STARTING POINT THE ELEGANT AND WELL-TRIED STRUCTURE OF ITS PREDECESSOR, THE 52, ADDING OTHER NEW ELEMENTS SUCH AS THE LARGER WINDOWS WHICH HAVE BEEN EMPHASISED BY THE STAINLESS STEEL AND CARBON FIBRE DETAILS WHICH PLAY WITH THE REFLECTIONS FROM THE WATER».
WILLIAM BURNS, DIRECTOR SUNSEEKER ITALY AND BROKERAGE DIRECTOR, SUNSEEKER LONDON GROUP

Finally, as I always find when discussing Sunseekers, the helm station is great, with comfortable seats that can be adjusted in every single direction, an excellent view of the instruments, and good throttle positioning. On the flybridge position, it should be noted how the passage for the stairs that lead down to the cockpit frees up a perfect view behind you of the swimming platform, which is vital when you are stern-to berthing. It’s just a detail, but it is one of many that make this seventeen-metre a perfect cruising device. 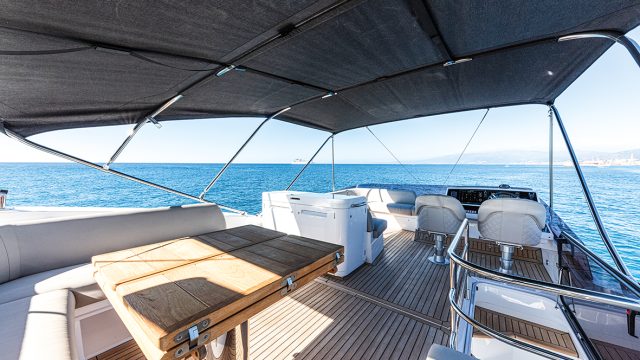 On the main deck, the bow section has been designed for double usage, both as a sun deck and as a social area, with a U-shaped sofa and a table that can be lowered. 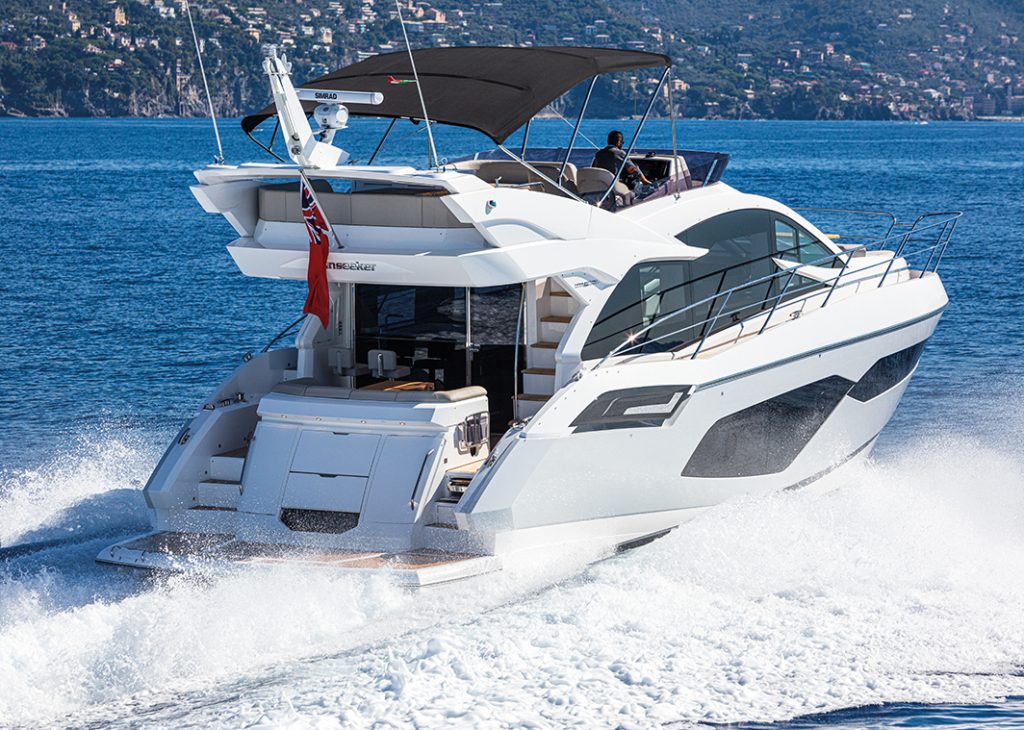 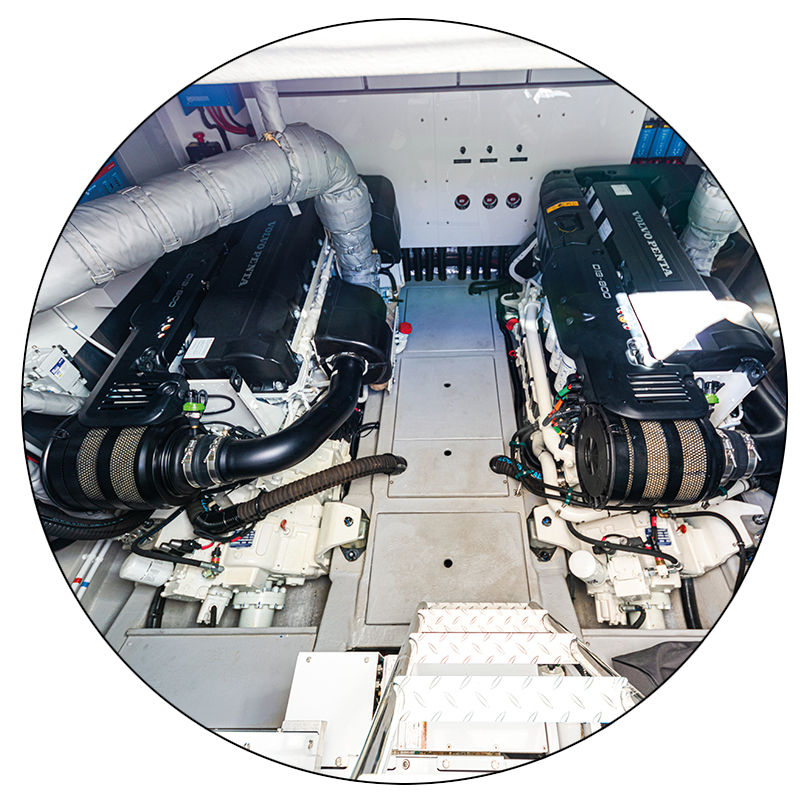 Engine room
The Manhattan 55 is available with either IPS or straight shaft transmission, like on the model that we tried, which had two Volvo Penta D13s, each developing 800 horsepower. It is also worth pointing out how much room is available in the engine room, where there was also a Seakeeper stabiliser and an updated generator. 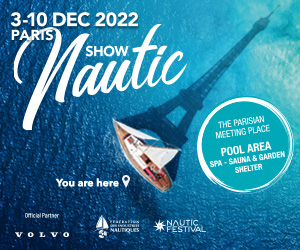 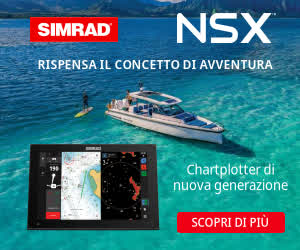