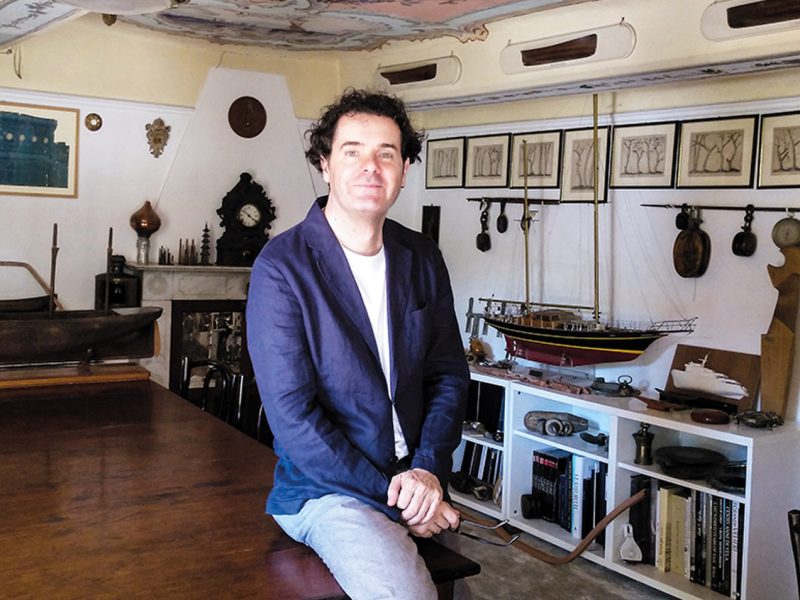 The architect Stefano Faggioni has been carrying on the family firm with contagious enthusiasm since the death of his father Ugo in 2000. His philosophy is quite clear: every detail on board must speak the same language

THE GULF OF POETS IS FAMOUS FOR THE HISTORICAL EVENTS CONNECTED WITH THE ROMANTIC AUTHORS, who during the nineteenth century drew inspiration from the beauty of this area. A century earlier, however, the ancestors of Stefano Faggioni, born in 1969, undertook the construction and restoration of local workboats. Born in La Spezia, the son of Ugo (d. 2000) and grandson of Guido (d. 1977), Stefano embodies the passion of all men who are fortunate enough to devote body and soul to what they love most. His surname comes from ‘Faggiona’, a town in the Ligurian inland already known in Roman times for its beech trees, the perfect material for obtaining excellent oars for galleys. 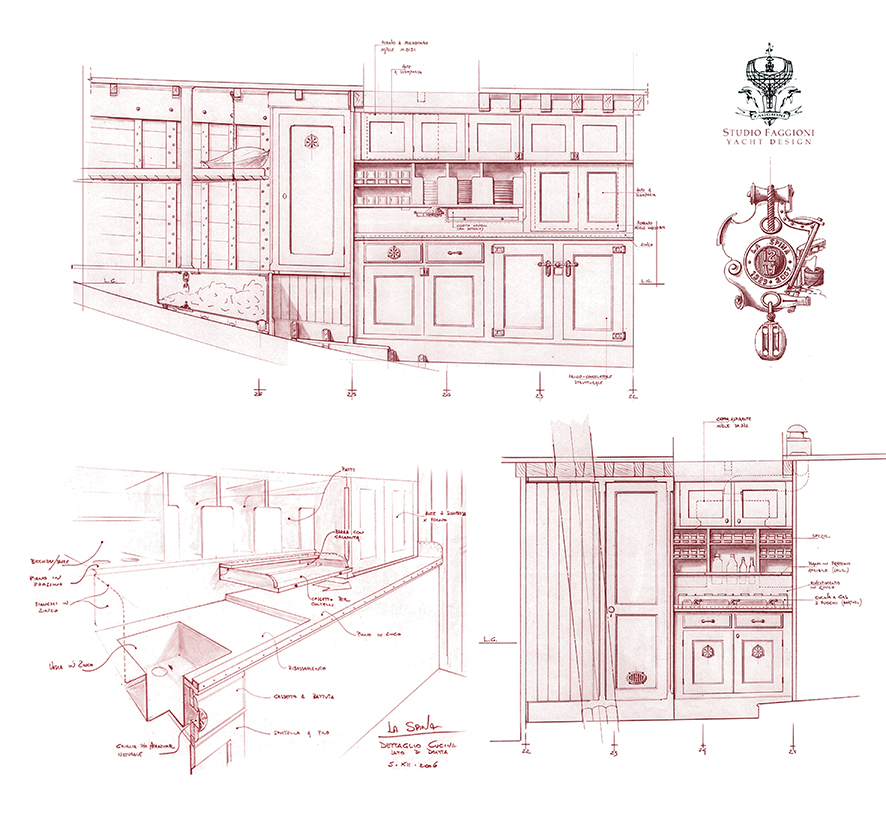 Born in La Spezia in 1969, Stefano Faggioni embodies the passion of all men who are fortunate enough to devote themselves with body and soul to what they love most.

The historic headquarters of Studio Faggioni is located in the village of Cadimare, near La Spezia, in the family home, which is not only one of the oldest houses in the area but also has a distinctive trait of being partly built with reclaimed naval material. The beams on the ceilings are authentic masts of sailing ships, large rudder blades were also found under the floors, to reinforce the slabs here and there, while the solid entrance door and part of the furniture come from demolitions. In the ‘60s, thanks to Ugo’s intuition, the company expanded its operations and started to design military boats, lookouts, fishing boats, and ferries. Stefano’s engagement in the family firm dates back to 1995 when he began to supervise the style and the furnishing of the motorboats, a field that was in line with the architecture studies he was conducting at the time. 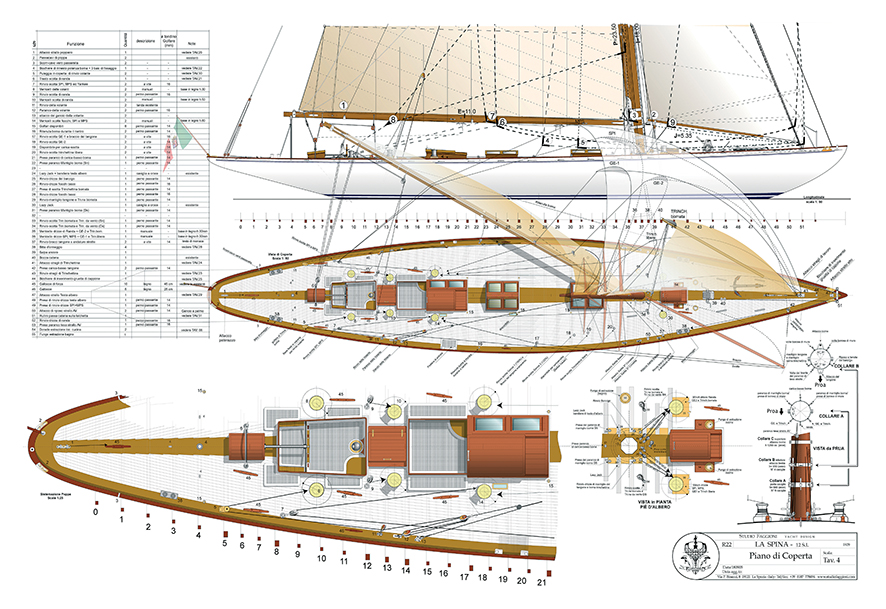 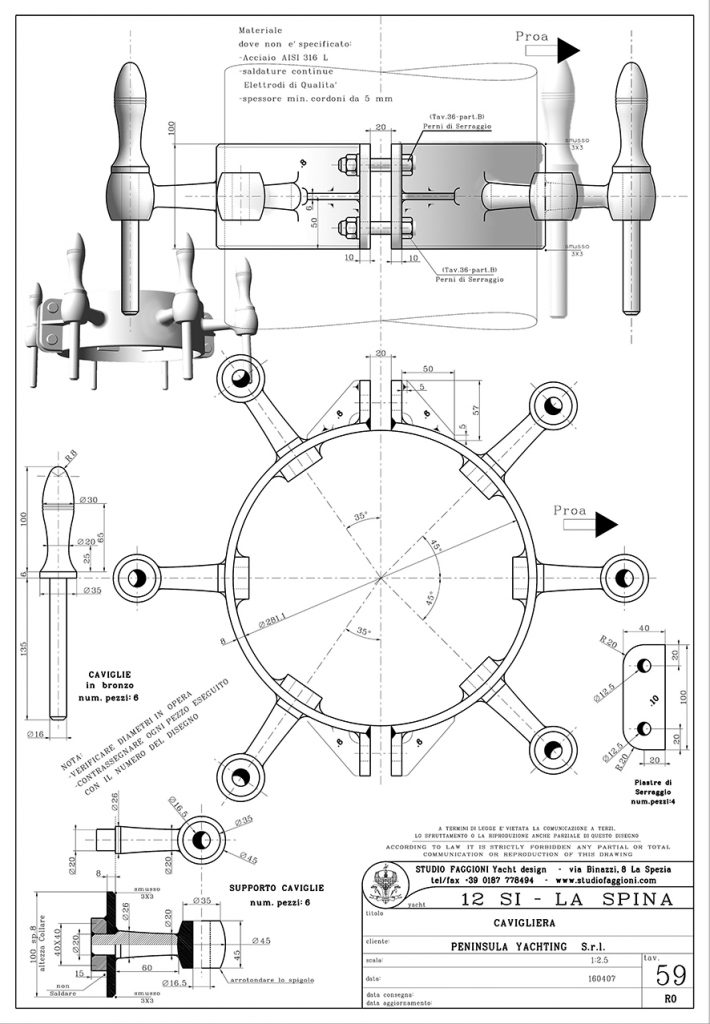 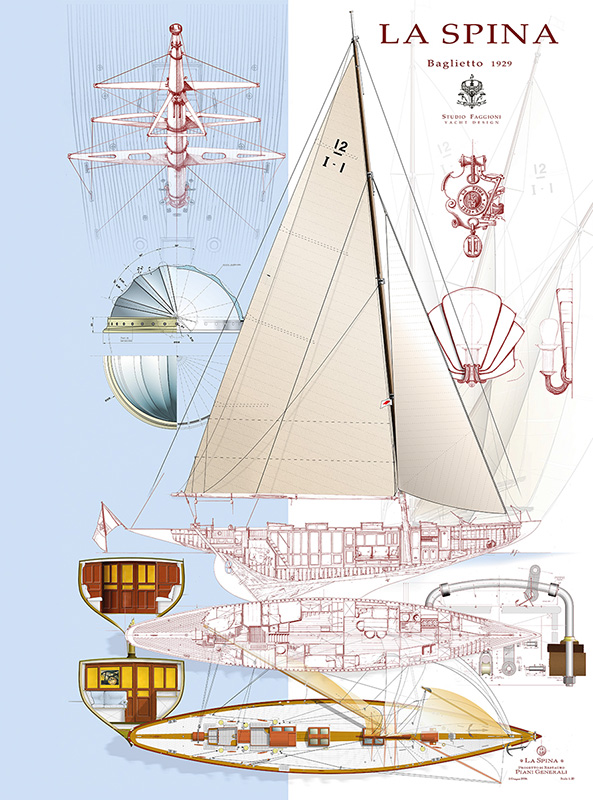 «In 1999  – as Stefano explains –, through the Beconcini shipyard which we already had relations with, we began to work on vintage yachts such as Kennedy’s Marlin (which was already owned by the Della Valle family at the time, ed.), the schooner Orion, the J-Class Candida, Iduna and Black Swan». The latter, a beautiful auric ketch from 1899, brought Stefano closer to the world of Charles E. Nicholson, the designer, and manufacturer he admires most. He has worked on at least eight boats designed by the genius of Gosport, all built according to standards that he defines as “excellent”: in addition to Black Swan, we would like to point out Astra, Candida, Joyette, Orion, Patience, Sylvia, and Yali. 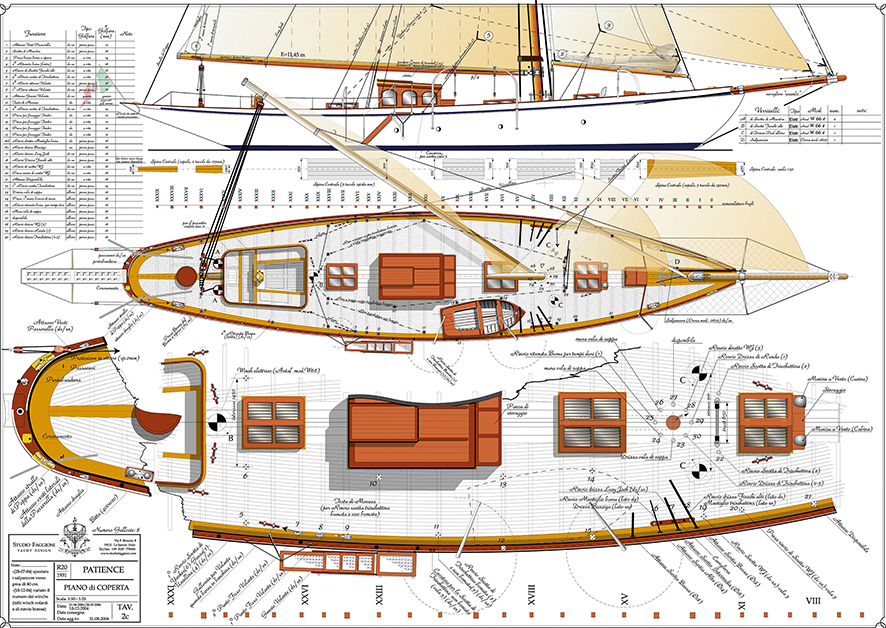 Unfortunately in 2000, Faggioni Junior had to learn to stand on his own feet when his father Ugo passed away: «I won’t hide the panic that my father’s death triggered in me – the architect remembers – and that unpleasant feeling of having to ‘fly without a parachute’, without his comfort and constructive criticism. However, I had my cousin Simone and my uncle Francesco beside me, who gave me great support».

Without them, maybe, Stefano would not have been able to dedicate himself to the reconstruction of the interiors of Lulworth (1920), the Big Class whose restoration at the beginning of 2000 was defined as ‘the refitting of the century’. «In the case of Lulworth – as Stefano recalls – the design project was very respectful of what little interior design existed before we began, creating new spaces with a spirit that resonated strongly with the original». 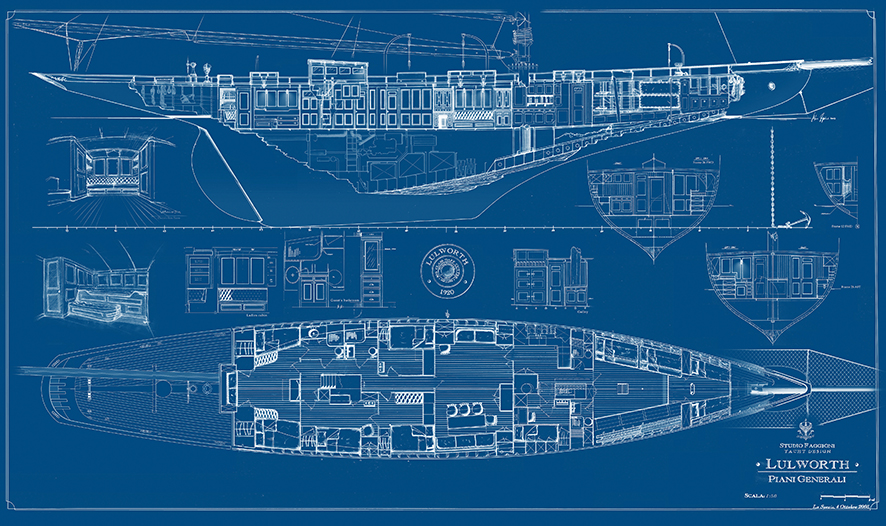 «On board the Big Class Lulworth, the design work was very respectful of what little existed before we started, creating new spaces with a spirit that resonated with the original».

The Faggioni studio is a true pearl, a sort of a museum for the select few. The place enchants with its smell of wood and sketches spread out everywhere, a sign that there is no lack of work nor customers. The ongoing operations concern the yacht Portola (1929), the Bermudian ketch Gitana IV (1961), built by Sangermani, the Bermudian yawl Mait II, built by Baglietto in 1957 (it was the first Italian boat at 1959 Fastnet, with Francis Chichester at the helm), the new replica of the cutter Britannia and more. 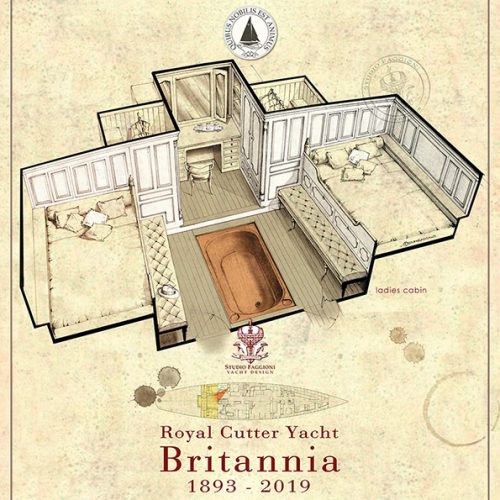 «As opposed to the computer, which I use, drawing by hand allows me to dive deeper into the project, and to experience it almost physically».

If Covid-19 allows it, the firm’s projects will take the architect from La Spezia to Valencia, Viareggio, Naples, Los Angeles, and, last but not least, Madrid, where his family lives and where he began running another architecture firm several years ago. Even if the computer is one of his essential work tools, Stefano largely continues to make pencil drawings, as the number of sketches mentioned above clearly shows this. It is because there is always a part of the project that must be studied the old way. «Hand drawing allows me to dive into the project, to experience it almost physically (…); I think this methodology is ideal for the restoration of vintage boats». 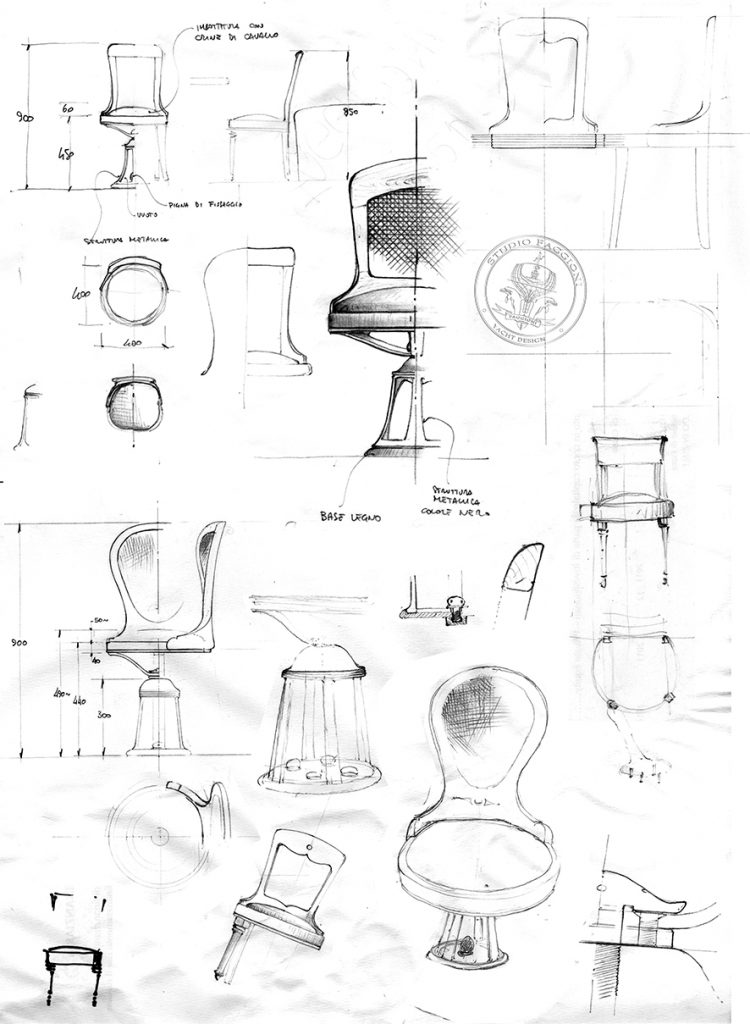 The sketches that mostly catch the eye are those of the accessories and hardware onboard, proving that this work involves every aspect of design at 360°, except for the installations and engines. Nothing in the design phase is left to chance: «I love to plan the interior spaces – Stefano comments –, having the privilege of being the first to experience the boat and to study all the details to make life onboard more comfortable. I even carefully study the smells that cabinets and drawers should unleash when opened; the result must be consistent and speak the same language, from the masthead to the interiors, all through the deck…».

«The result of my work must be consistent and speak the same language, from the masthead to the interiors, all through the deck».