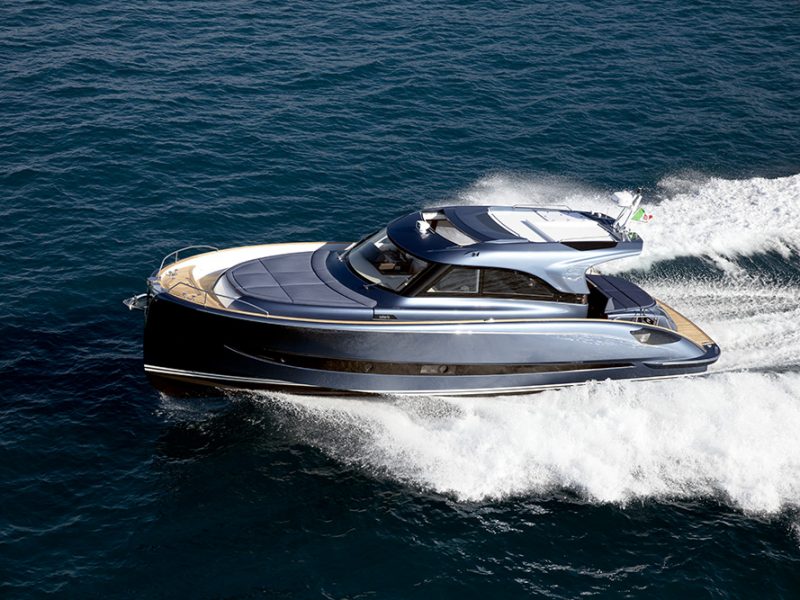 The Lobster version of Solaris Power 48, in order of time, is the latest arrival, but it is certainly not the least interesting. Following the open and the Fly version, this fourteen-meter-long “lobster” is perhaps the most intriguing.

At the heart of it all is the sophisticated hull designed by Brunello Acampora’s Victory Design and a modern reinterpretation of the classic styles of east-coast lobster boats. Here, however, the idea is interpreted in the purest way: no fly, no Mediterranean-style open deck, no T-top.

However, at the centre of the boat there is an elegant deckhouse well integrated with the lines of the bulkheads and  the hull.

Underneath there are a dinette, wheelhouse and galley, as well as plenty and well organized space to move around.

Hidden above is a sundeck, concealed from view when looking at the profile of the boat, which is accessed by a ladder, retractable in the final part of the roof, and which leads to the cockpit. The design of the stern area, common to all three versions, is very refined and seems to be carved in fiberglass. Behind it there is a garage for a 2.5 meter long tender.

The new feature, with the Lobster setting, is that there is no longer a single large sundeck above, but a living and dining area with a central table that can be quickly lowered if necessary.

The night deck has two fittings: two cabins and two heads, or only one head and a dinette, but there is also the possibility to customize it. On the trial version, for example, the owner has chosen to have only one large open-space.  Here, as on the main-deck, the attention to detail is meticulous, the finishes are of the highest level and the choice of colours and essences is very refined.

As expected, the Solaris Power 48 confirms excellent navigation qualities also in its Lobster version. In the engine room there are two 480 hp Volvo Penta D6 combined with two IPS 650. At 20 knots sailing requires extremely low fuel consumption: 4.7 liters for every mile traveled, with a range that exceeds 350 miles at economic cruising speed. The comfort remains excellent even if you lower the throttles a little more: at 25 knots you still travel with very low fuel consumption, 5 liters per mile, and always in absolute silence.

Even the top speed is not at all bad for an elegant lobster boat, at 32.5 knots.