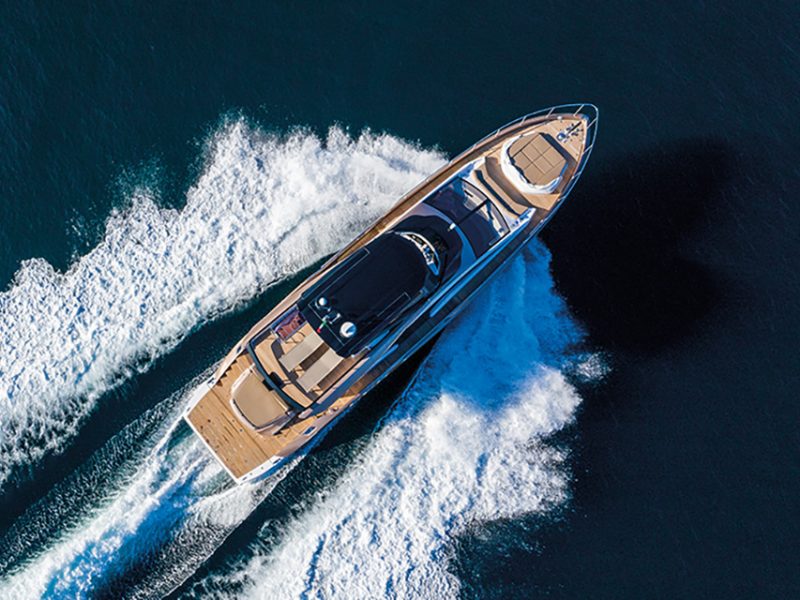 A 21-metre motor yacht that can do thirty knots with two 900 hp Volvo Penta engines, each linked to IPS 1200 transmissions

WE TRIED OUT THE SESSA MARINE FLY 68 IN THE SEA OFF VARAZZE MARINA. The weather that day was perfect, with the sun shining, not much wind, and the sea with short, steep waves of around twenty to thirty centimetres. We were accompanied by the sales manager of the Lombardy yard, Domenico Lastella.

The boat was a metallic bronze colour, which helps make the design of the boat more balanced. Simone Lessana, who was the driver, used his skill to position us a few centimetres from the quay, and we jumped on board the enormous rear platform to get into the cockpit. You get the strong feeling that you are on board a big boat. The main deck features two large sun areas at either end. 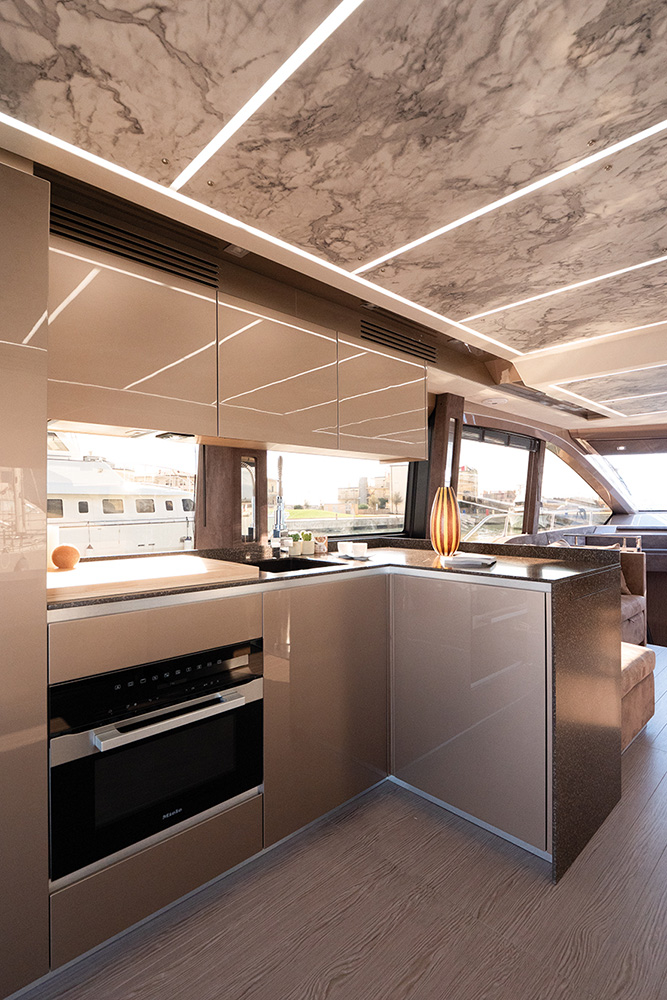 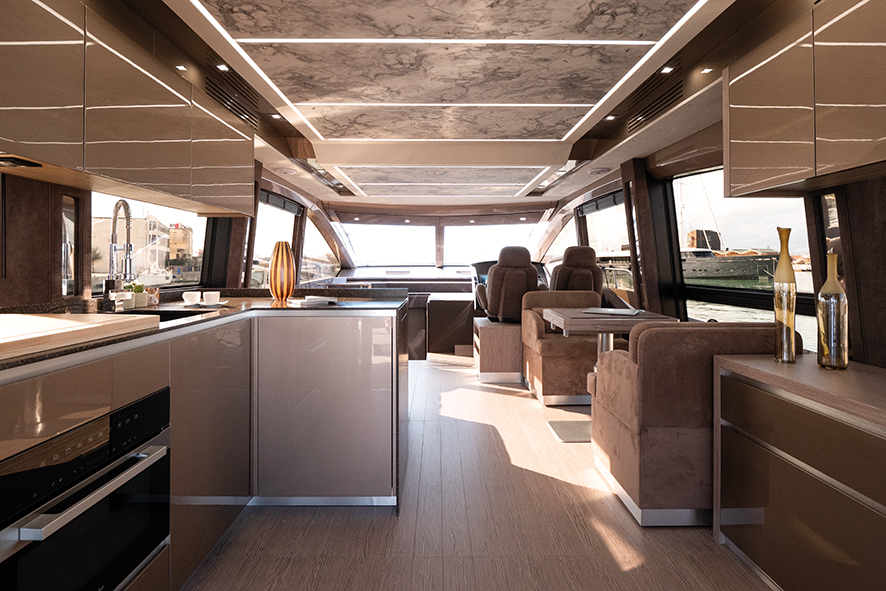 The big glass panoramic sides allow owners 360-degree contact with the sea and putting the kitchen in the lounge creates a bright live environment.

After the glass, the interior is free of obstruction right from the kitchen to the wheelhouse, which is equipped with a bridge with two Raymarine Hybrid Touch screens and has two driving seats made by Besenzoni. We went up the staircase that leads to the flybridge, which follows the classic set-up but is functional and comfortable. The console is almost identical to the main one in the deckhouse. The cabin deck has a traditional layout, with the large master bedroom midships that takes full advantage of the entire five metres maximum beam, including the bathroom on the starboard side. Going forward there are two VIP cabins, which also have their bathrooms. The flybridge has a nice inclined arch which holds up the antennas and the carbon fibre top. 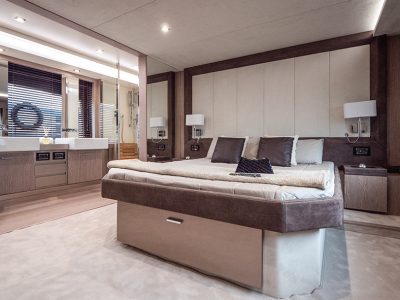 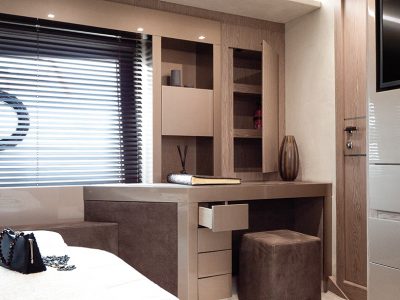 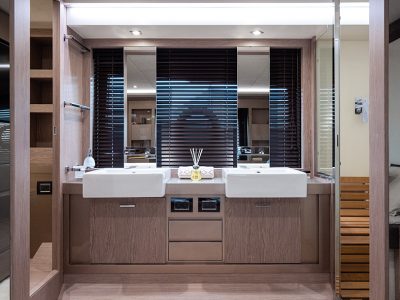 There are three cabins and three bathrooms below decks. The interior décor can be customised, with different materials and furnishings, to meet the requirements of every owner.

We took the helm – onboard, there are two Volvo Penta D12s each developing 900 horsepower and linked to IPS 1200 transmissions. The engine room is compact and includes all of the equipment to run the boat, such as the diesel tank, the generator, the electrical systems, air conditioning and a Seakeeper G9. We got to the right trim in 8.4 seconds, while we got to top speed from the 14-knot planing minimum in 38 seconds. 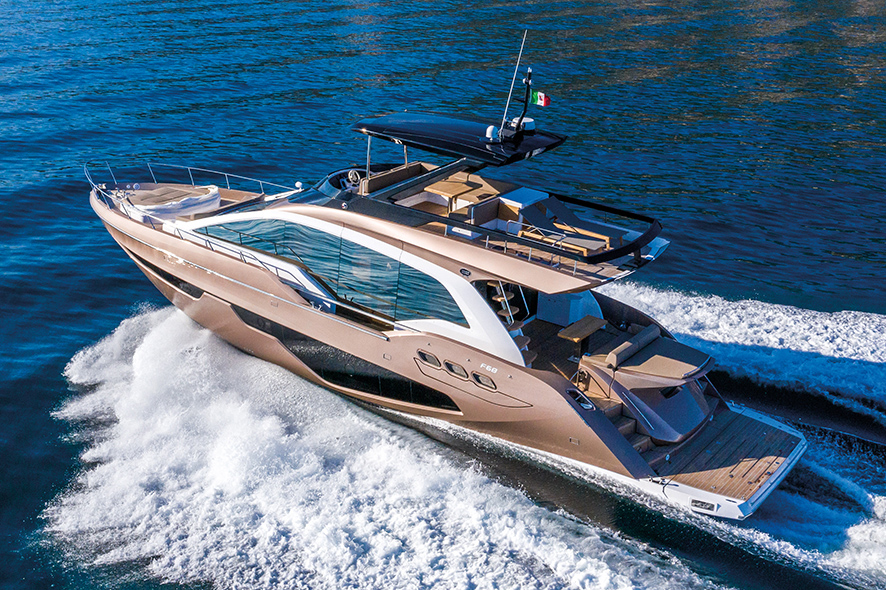 The engine room houses two six-cylinder in-line Volvo Penta D12 engines, 900 hp each, which paired with three IPS 1200 pods generate a top speed of over 30 knots. Fuel consumption at a cruising speed of 24.7 knots is 10.4 litres of diesel per mile.

We did a lot of turns, one of 360 degrees in 47 seconds with the engines going at 2000 rpm. The circle we drew on the water was very precise and had a diameter of around 60 metres. During the turn, with the helm hard down to starboard, the boat tilted six degrees. If you bear in mind that it displaces around 36 tonnes fully laden, it has a weight-to-power ratio of around 19 kilos for every horsepower. The boat was lively and powerful, agile when manoeuvring and without pushing it too much maintained a cruising speed of between 20 and 24 knots in real comfort, and then a top speed of thirty knots. 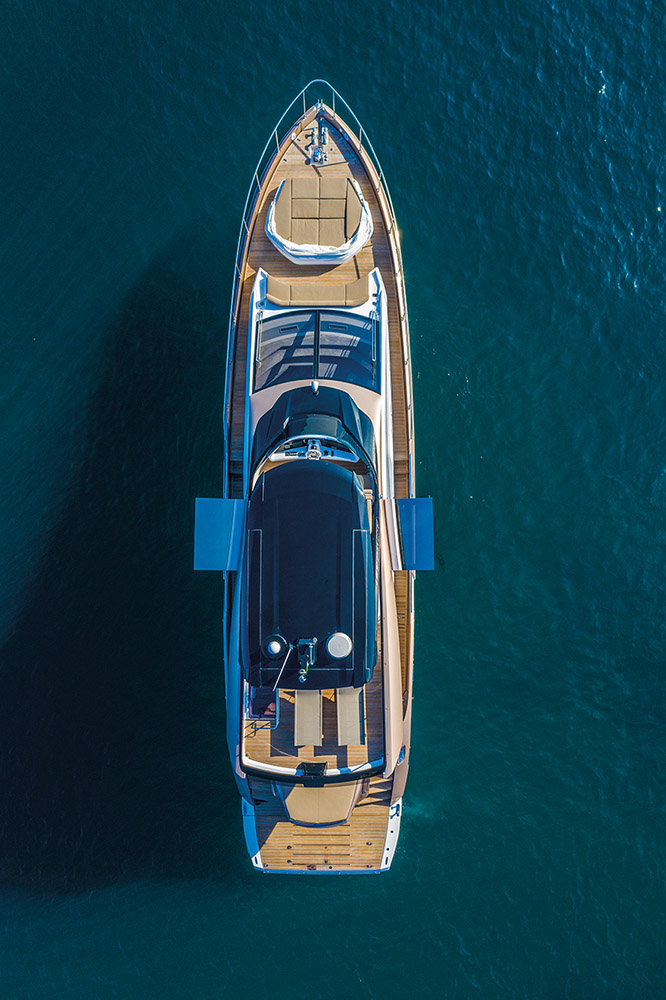 The flybridge has a sun area, the second steering position and the carbon fibre T-Top which means the area is better covered. The bow sun pad can be converted into sofas with a table.

The waves were left well behind a hull that is surprisingly responsive to changes in direction, precise in the course it takes and very soft in feel. And although conditions on the day we did the test weren’t especially testing, we did have fun going over our bow waves. That turned out very well: the boat as a whole is very solid, there aren’t any vibrations and you travel in a constant and reassuring feeling of being compact.

And finally, we should draw attention to the nice fuel consumption curve: it is nearly flat at nine litres per nautical mile, from 1400 rpm – so just after starting planing – up to 1800 rpm and twenty knots, which is the perfect economy cruising speed which ensures you get around 350 nautical miles range.