Sanlorenzo 64Steel Attila, the biggest ever 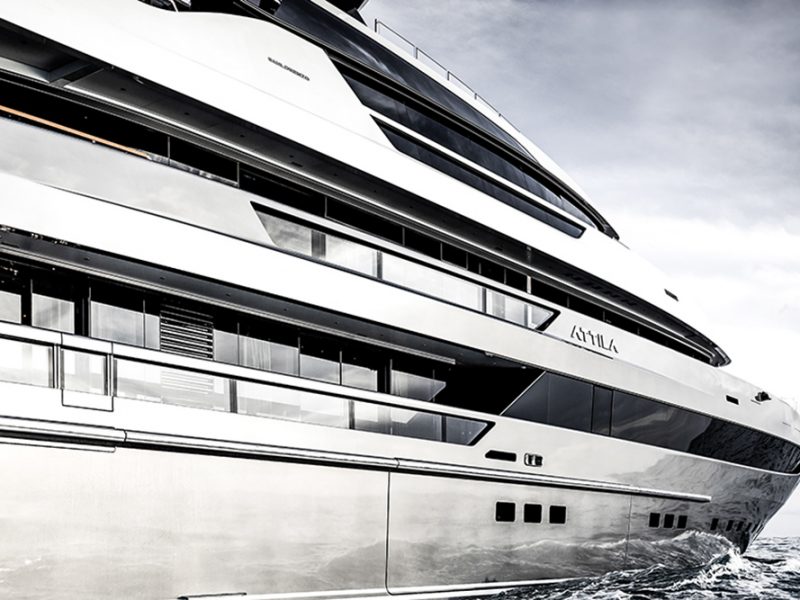 The 64-metre 64Steel Attila has a gross tonnage of 1,600, five decks and a maximum interior width of 12.5 metres, making it Sanlorenzo’s biggest yacht to date. Its exterior was designed by Mauro Micheli and Sergio Beretta’s Officina Italiana Design, while the interiors are the work of Francesco Paszkowski Design with the assistance of Margherita Casprini

by Mariateresa Campolongo – photo by Guillaume Plisson for Sanlorenzo

THE MAIN DEBUTING SUPERYACHTS TO INTRIGUE ME AT THE LATEST MONACO YACHT SHOW certainly included the 64Steel Attila, the biggest yacht developed by Sanlorenzo to date, with exterior design by Officina Italiana Design and Ufficio Stile Sanlorenzo, and interiors by Francesco Paszkowski Design with the assistance of Margherita Casprini. Being accustomed to seeing Sanlorenzo’s diverse range united by an interior design that is always elegant and characterised by clean, simple lines, I was curious to see how the yard would interpret its design philosophy in a 64-metre yacht, a type of vessel that is often packed with superfluous frills. My expectations were met as soon as we climbed on board. 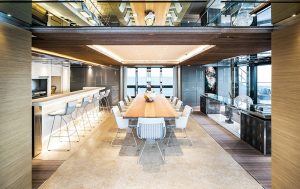 It only took a moment to absorb Sanlorenzo’s typical design quality. The interiors were spacious, the atmosphere warm and welcoming, with luxury apparent in the great attention to detail and not in the needless addition of materials and objects.

«Francesco Paszkowski and Margherita Casprini’s interior design gives us an opportunity to savour real luxury that goes beyond fashions», explains Sergio Buttiglieri, Style Director at Sanlorenzo, as we visit the various spaces in the superyacht. It’s not a question of regressing to an ultraconservative look, as is often the case at boatyards that are sometimes dominated by an embarrassing linguistic paralysis gravitating around spatial conformities that can’t really be justified anymore due to the technology now available in the sector and that have nothing to do with the classical concept of Sanlorenzo style.

The spatial expansions of the exterior lines, which Officina Italiana Design produced in synergy with the interior design by Paszkowski and Margherita Casprini, are truly stunning and overturn the perceived limit that one often experiences aboard these self-propelled gems. Studio Paszkowski wanted to restore a new theatrical dignity to these places, which has no need of superstructures from the past. This theatrical dignity loves to express itself with a new materiality and a brand-new cognitive process, transporting you into real luxury made up simply of spaces and variations upon harmonies resulting from detailed proxemics.  The design’s most characteristic features certainly include the rear part of the main deck and the beach club on the lower deck, which have been integrated as much as possible in order to enjoy both areas without splitting up the guests.

«The most important aspect associated with the definition and concept of this yacht was the desire to create continuity between the beach club and what we could describe as an ‘al fresco’ veranda, namely the rear section of the main deck with the swimming pool, by means of an imposing staircase», states Antonio Santella, Sales & Marketing Vice President, Sanlorenzo superyacht division.

The owner’s life philosophy is immediately apparent: relaxation, good food and social life. «The owner wanted us to incorporate lifestyles that are familiar to him at home, such as the kitchen and the numerous relaxation areas, both of which are very important to him», explains Francesco Paszkowski. 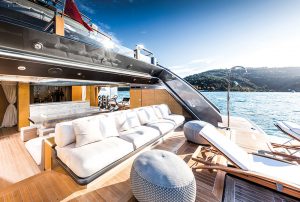 «The layout of the main deck is rather unusual», he continues, «because one immediately fines oneself in the food zone and we’ve linked the main deck with the beach club as if it were a single large environment on two levels. In addition to the beach club – which grows in size once the two side terraces are open – with its hammam, sauna, massage room, sofa facing inwards and outwards and a central bar, we also created two other large relaxation areas: one towards the bow of the bridge deck, which can also be used for parties or as a helicopter landing pad in the future, and another on the sun deck. A system of glass walls on the sun deck means that it can also be used in the evening, sheltered from any breeze». 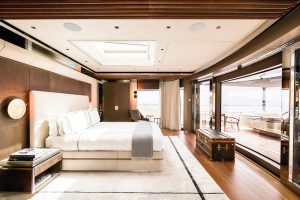 The main deck hosts four guest cabins and the full beam VIP suite, whilst the master cabin is forward on the owner deck. The lower deck welcomes the 18 crew members.

The bridge deck houses a more formal dining room, while the owner has a deck for exclusive use (between the bridge deck and sun deck) with full-height windows in the master cabin. The owner deck also includes an indoor living area and an outdoor relaxation area in the stern, two bathrooms, a hairdressing room and a private pool towards the bow that enjoys total privacy.

The handpicked combination of different materials was fundamental to the creation of the warm, welcoming atmosphere that the owner wanted. Teak and marble both feature extensively. The bed headboards are covered in nubuck, with the exception of the owner’s headboard covered in crocodile skin. 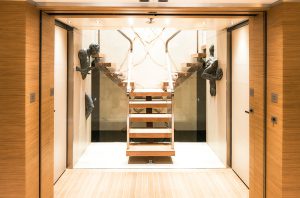 The furnishings comprise a skilful combination of renowned Italian brands and custom pieces designed by Studio Paszkowski. The cupboard door handles were designed by Francesco Paszkowski Design and feature a decorative motif that recurs throughout the yacht.

The studio also picked out art works and designer objects to display on board, a very time-consuming job that often goes unnoticed. The owner provided instructions and gave the final approval, as in the case of the gilded gorilla statue that deliberately breaks up the understated seamlessness of the décor in the dining room, the statues on either side of the stairs from the beach club to the main deck, and the silver armchairs by Baxter in the living area on the owner deck.

The lighting and light sources have also been the object of careful study, such as the lamps on the dining table and the ones in the corridors of the main deck made by Catellani & Smith and customised with the company’s help in keeping with the studio’s instructions.

Engine room
The propulsion is entrusted to two CAT 3516 C engines and the maximum speed is of 17 knots. This engine has an outlet mechanical power of 1,506 bkW (2,100 bhp) at a rotational speed of 1750/min. It is available in compliance with EPA (U.S.) standards under the flexibility regime and for other regulated and unregulated areas in the world. 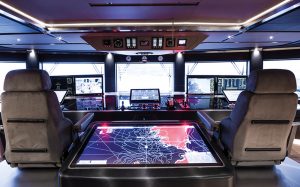 The dashboard
In the I-Bridge dashboard by Team Italia, navigation data is sent by the instruments to the transparent display, which makes it easier for the captain to check the necessary data and still keep fully focused on steering the yacht. The head-up allows overlaying the main data (such as course, waypoint, AIS and ARPA targets) onto the actual navigation view, in addition to providing all the other useful information