Royal Huisman’s Project 403, PHI, has departed from the shipyard’s new build facilities in Vollenhove and is now on her way to Royal Huisman Amsterdam to start sea trials.

The 58.5m / 192ft motoryacht PHI has left new build facility in Vollenhove, The Netherlands. PHI stands out with her low, elegant profile, now a trademark of the Dutch yard. Royal Huisman has in fact delivered over thirty sailing superyachts with this feature, specialising in the engineering challenges that come with such a design choice. 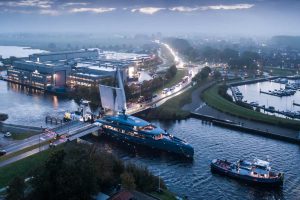 Developed and constructed below 500GT, PHI is by far the longest motoryacht in this category, based on current Classification rules. Born from the drawing board of Cor D. Rover, the general concept, exterior design and interior layout is based on the ”sectio divina” or the Golden Ratio. 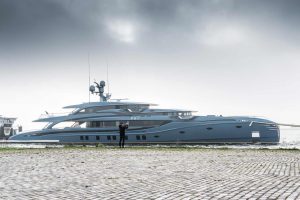 The yard is also developing two current motor yacht projects: project 403, and project 406, a 52m / 171ft sportfish yacht that will become the largest of its kind in the world. The individual aspirations and challenges of each of these projects were seen to be well outside the comfort zone by some yards. 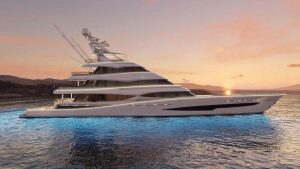 Royal Huisman’s reputation has been largely built on a portfolio of thirty-plus low-profile sailing superyachts, from 30m to 90m+ / 100ft to 300ft+.