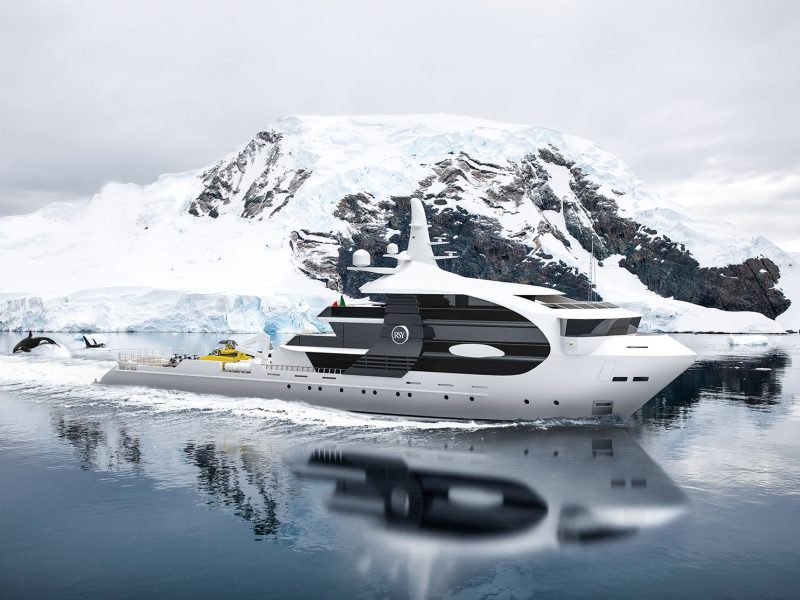 In a world particularly crowded with design ideas of all types, it is not always easy to come up with something that can trigger the interest of the more expert shipowners and fans. First of all, you need to clearly indicate your focus, and here Rosetti’s proposal is very clear. Building a boat that can navigate in any weather condition and on all latitudes of the planet. This is no exercise to fuel the debate on style, form and function. 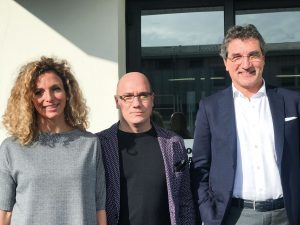 The project created by Meccano Engineering (Caterina Benedetti, Naval Engineering, Marco Glavina, Yacht Designer e Stefano Reggente, President Meccano Engineering) was studied in every detail and is ready to be launched into production within 100 days from the signing of the contract. Their skill in designing boats with cutting-edge technological features is well known. As well known as the competence of Rosetti Marino SpA, one of the world leaders in the design and manufacturing of a wide range of commercial vessels, from ocean tugboats to service boats for platforms and up to passenger boats, equipped with the most advanced engines, automation systems, navigation aids and control systems. All this competence was passed down to Rosetti Superyachts, which is now using it to build pleasure boats.

The project for the 65-metre Explorer Yacht has all the characteristics of a Supply Vessel. The builder’s innovation has always been inspired by Nature and by our capacity to adapt to it, especially in the harsh conditions which you can encounter at sea. The ‘Orca’ project is an example of this adaptation skill. 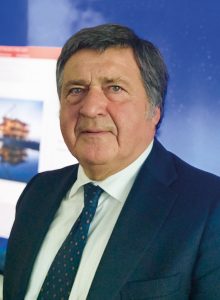 «The design is based on the profile of a killer whale, the biggest and most powerful member of the delphinid family. Immediately recognisable due to its black and white colour, this mammal covers the oceans of the entire planet, from the Arctic to the Antarctic and all the way to the tropics. We designed our Explorer Yacht with the exact same purpose», says Fulvio Dodich, CEO and Partner at Rosetti Superyachts. These features immediately stand out when you observe the boat’s profile with its enveloping glass surface, the superstructure and the radar mast that resembles a large dorsal fin. It even has the typical white spot that orcas have on their side on the bulwark of the Owner’s Deck which lights up at twilight. 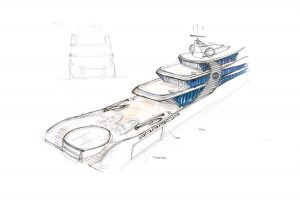 With a maximum beam of 12 metres and an estimated gross tonnage of more than 1300GT, the ‘Orca’ project develops over four decks in addition to the tank-top bridge. Owners can choose between different solutions in terms of the layout. The standard version includes an open main deck astern to host the tenders and toys as well as a touch & go helipad. Alternatively, this area can host an infinity pool facing stern or a raised helipad with indoor pool and spa area.

Astern the lower deck, a large garage can host two tenders or several jet skis and water toys. Accommodation for guests, which includes two suites and two cabins, is located further forward on the same deck and can be accessed from the main staircase or by means of a lift that connects all the decks up to the sun deck. Cabins for the crew, on the other hand, are located on the bow. The interiors of the main deck host a guest area with a large main lounge, the dining room, and one extra suite afore. The galley and crew service areas are located to the left.

Wide lateral walkways on the main deck lead to the mooring area on the bow. This area, which is covered to ensure safety during manoeuvring in extreme conditions, accentuates the height of the already impressive bow. The bridge deck houses the owner’s apartment with double bathroom, walk-in closet, study and a large gym. 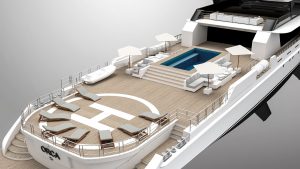 The suite has a private terrace facing the open stern deck. The captain’s cabin is located astern the wheelhouse. The large sun deck is equipped with a barbecue and bar, sundecks with access to the guest lift and separate staircase for the crew. Powered by a pair of CAT 3512 engines with 1398kW each, the boat has an estimated range of about 5,000 miles at a speed of 11 knots.