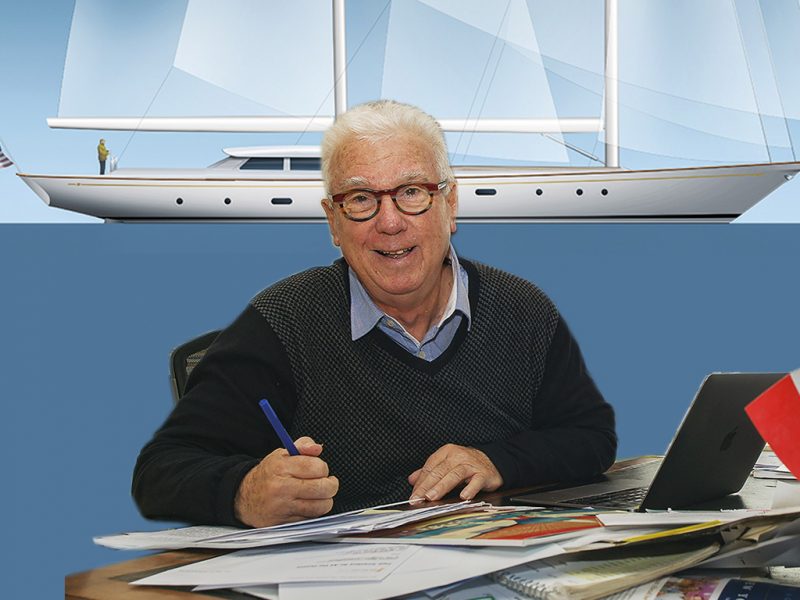 We met Ron Holland in the beautiful setting of Granville Island, where he told us about his passions, his daily life and his new 41-metre boat design

IN THE NOT TOO DISTANT PAST, GRANVILLE ISLAND was at the beating heart of a city that used to be called Granville, named after the liberal politician George Leveson-Gower, Count of Granville, before changing its name to Vancouver in 1886. Today, this island is associated with a 14-hectare district that plays host to almost 300 businesses, including craft shops, breweries, cafes, restaurants and grocer’s shops where you can even buy Italian wine and fresh French cheeses. Granville Island is also home to various theatre companies, a boutique hotel and an art gallery, as well as a large public market, a well-equipped marina and offices.

The New Zealand designer Ron Holland moved his business to Granville Island after a long period in Cork, Ireland, the country that adopted him in 1974, offering him easy access to his European clientele. During that period, Holland developed quite a reputation for himself thanks to Imp, Golden Apple, Silver Shamrock and numerous other boats. These were followed, in 1980, by Kialoa and Condor, giving rise to the philosophy that brought in bigger and bigger yacht orders for this self-taught yacht designer. Whirlwind XII, 1986, was his first boat to measure more than 100 feet long. Today, over one third of the world’s fifty biggest sailing yachts were designed by Ron Holland Design. Many of them were built by Perini Navi, while Mirabella 5 (which has the tallest carbon mast in the world, measuring 88.3 metres high) was made by Vosper Thorneycroft. 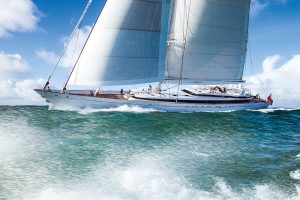 In 2012, Ron decided to move to Vancouver, coinciding with the year that he “reached retirement age”. In a certain sense, his move to Canada was the result of great nostalgia – probably due to his advanced years – for the Pacific, the ocean where he first set out as a sailor and designer. Ron Holland began sailing in small boats. Even now, despite having designed large motorsailers and Explorer yachts, this sprightly and loquacious man, born in 1947, never misses a chance to go out in his tiny Coronado 25 Kia Aura. However, he doesn’t go sailing on his typical day, instead reserving this activity for the occasional weekend.

Holland leaves his scenic apartment in English Bay on a daily basis and goes on a twenty-minute walk to the quay, where he takes an electric boat service to Granville Island, making his way to 1650 Duranleau Street. There, assisted by Holly and an intern from New Zealand, Ron focuses on his new design for a 41-metre yacht with a maximum beam of 9 metres. We were offered a sneak preview of the designs. «It’s a schooner that will have a super-elevated lounge, a spacious master cabin amidships and VIP cabins with mobile partition walls. The client already owns a 28-metre yacht and is currently sailing around the world. The idea is to continue the journey with the new boat in 2022». The yard that will build the yacht will be announced this spring. This period will also see the launch of Perini Navi’s fourth 60-metre hull designed by Ron Holland Design, a model that began life with the Seahawk. For Holland, Perini Navi is synonymous with the Perini Navi Cup, an event he always tries to take part in.

«Seeing so many of my boats together always triggers a certain emotion in me. I’ve designed a good ten Perini 56-metre motorsailers, and there are all the other yachts too. And then Sardinia is one of my favourite islands. On my first visit to Italy, in 1973, I took part in the One Ton Cup in Doug Peterson’s Ganbare in Porto Cervo». 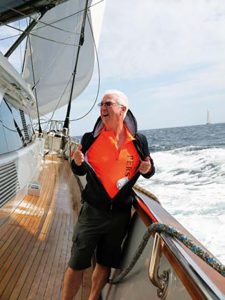 After glancing out of the office window and seeing the vessels dancing in a lively breeze, Ron accepts our self-invitation to go out for a sail, given that Kia Aura was just around the corner. And so, on a beautiful September day, after helping to carry comfort items and cushions for the cockpit on board («I don’t keep them in the boat anymore because they’ve been stolen in the past», he explains), we cast off and head out to sea.

Once the outboard engine has been turned off and the sails raised, he points out his home as we pass by it. He devotes his next words to “his” Vancouver: «The day I arrived in the city I was struck down by an illness and struggled to get over it». Despite knowing him well, this is the first time we’ve heard this and it finally explains why he has difficulty pronouncing words as he would like. As if that were not enough, from time to time his voice is drowned out by the sound of the water flowing past the hull or the noise of the manoeuvres: the jib that flaps during the turns, the screeching winches, and the objects falling into the cockpit when changing tack. As we pass under the iconic Lions Gate Bridge, opened in 1938, Ron poses for a few more scenic shots, revealing a certain shyness. 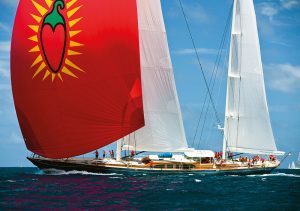 The resulting image is one of a humble man who has achieved what he wanted and is at peace with himself and life. «One positive thing that has come out of that “setback” is that I devote more time to myself: I read a lot, especially stories of the sea, such as Beyond Boundaries by my friend Des Kearns, and books of another kind, like Source by Joseph Jaworski, another dear friend of mine. When I can, I board a plane to visit my daughters and my six grandchildren who live on three different continents: America, Europe and Oceania».

The final words in our interview are all about his homeland and the Pacific, which Ron can look at every day from the windows of his home. «New Zealand is down there, 6,000 miles away». His gaze then grows increasingly distant and his tone more unassuming, as his emotions seem to catch him unawares. For reasons that we are not told – and perhaps not even he can explain – “his” island, the one he comes from, has never felt so close to him.