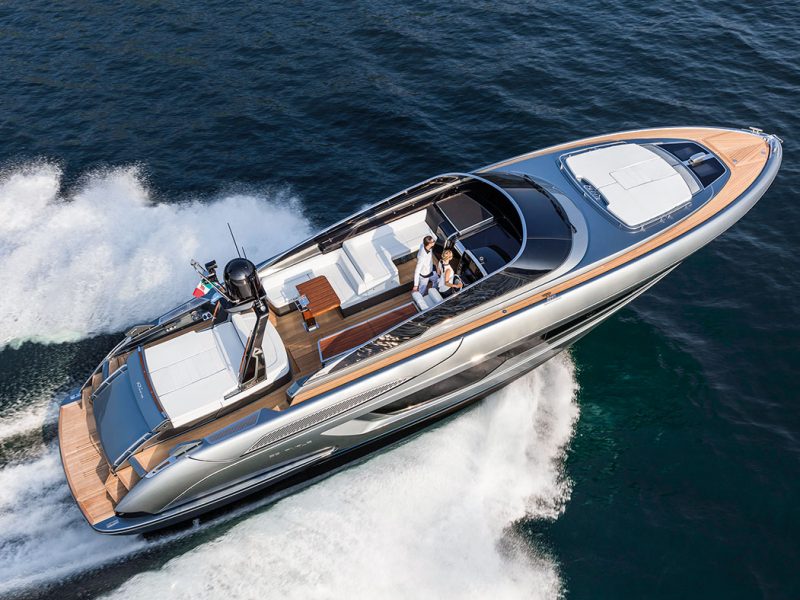 Riva’s new ‘open’ has arrived, pure and extremely elegant, born to live in the open air, and which renews the twinning with the Cinquecento. This time it is the turn of the Abart 695 Rivale car 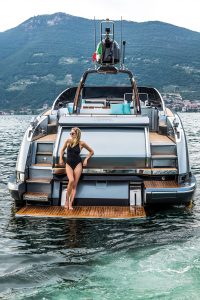 Who better to tell us about the new Rivale 56s than Mauro Micheli from Officina Italiana Design, the man who designed it? He watches it go for a spin at Sarnico, just after the official launch, which was done in great style.

«Do you know why it is so beautiful?» He asks me almost without thinking, or without at least thinking much about me. He says it without presumption, it is a statement. He stopped for a second to have a good look, on the edge of the quay, setting himself aside for a moment from the great mass of journalists who are crowding the yard.

«No, why is it so beautiful?» I answer. «Because it is created from just two lines. Look at the profile, there is nothing unnecessary». There, I have caught the architect in a moment of pure ecstasy. Paternal pride perhaps, but there is nothing unreasonable about it. The Rivale 56 really is beautiful. And if everything is worked around just two lines, there is also takes a lot of research, and a lot of work to create a 17-metre masterpiece. Super-pure, Riva open style. «The 56, he tells us, is a completely different boat to the previous Rivale. We have done a lot of work to increase the size of the external areas. The place where you spend most time is the cockpit, which is a place for socialising and has been enlarged and exploited to the full. We have moved the windscreen further forward than it is in most boats of this type, so as to provide it with more usable space».

But below decks, you have taken a very different tack.
«Yes, that’s right. Because the needs in that area are quite the opposite. We have slightly reduced the living area, which is the space that is the least used of all those on board. And we have an owner’s cabin that is large and comfortable, and has its own en suite bathroom».

Strolling around the Rivale means discovering a series of marvels. Like the mechanism for the bow anchor, an engineering jewel; or the touch-screen Boening-Man, which is a wonder of technology; and what can we say of the single-piece windscreen, a piece of pure master craftsmanship, or of the continual hull glass with flush portholes giving fabulous views from the owner’s cabin? We also really liked the interior: elegance and understatement, with a lot of polished mahogany, but done with a beautiful light touch, in keeping with the Riva style. 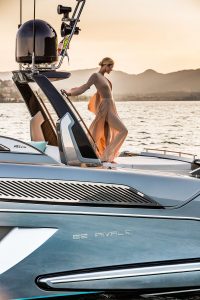 There are two cabins, with the owner’s at amidships and the VIP one forward, as well as a third one reserved for the crewman (and even that is exceptionally luxurious) with an unusual entrance located below the windscreen. The Rivale 56’ can carry two MANs each developing 735 kW (1000 hp) or, upon request and in the case of the top of the range model, with two 882 kW MANs (1200 hp each).

In both cases there is a V-Drive transmission and while you can reach 31 knots cruising speed and 35 knots top speed with the standard version, with the two 1200s you can get 34 knots cruising and 38 knots top speed, as we were able to see for ourselves during a quick trip around the lake at Sarnico. Everything was perfectly stabilised by two Seakeepers, which were perfect in this case to balance out the enthusiasm of a small group of journalists who were dead set on trying out Riva’s latest jewel.

«Normally, we ask Micheli at the end, car-boat combinations don’t turn out very well, especially in terms of design. But with this Riva-Fiat twinning, and then with Abarth as well, things seem to have taken the right direction. How do you explain it?
«Because there is a cultural affinity. We share a common past. They are both 1960s icons, they are the symbol of two entrepreneurial successes, of great men. Luxury isn’t the only value in play. You also need a real historical, cultural tie».

Abarth and Riva Two sixties icons
A year ago we attended the launch of the limited edition Cinquecento Riva. Now it is the turn of the Abarth 695 Rivale. A super powerful cinquino with a 1368 cm3 engine, 180 hp, the kind of weight-to-power ratio that a supercar has (5.8 kg/hp and a weight of 1045 kg) and 225 km/h top speed. But it is also very elegant. Two-tone Riva evening blue and Shark Grey, embellished with a double stroke of aquamarine around the waistline which suggests the “beauty lines” of a boat. 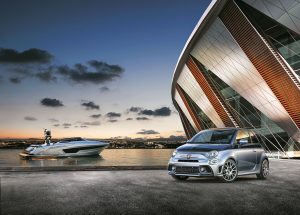 And then there are the chrome satin finishes on the door handles, the “695 Rivale” signature on the rear door and on the rear mudguards and the chrome satin moulding in the rear that suggests the sophisticated shape of a yacht. And for people who can never be satisfied, the 695 Rivale 175th Anniversary model will also be launched to celebrate 175 years of the Riva brand.  It is available in berlina or cabrio versions, of which 175 each will be made.