Raffaele De Rosa, the visionary poetics of an irreverent painter 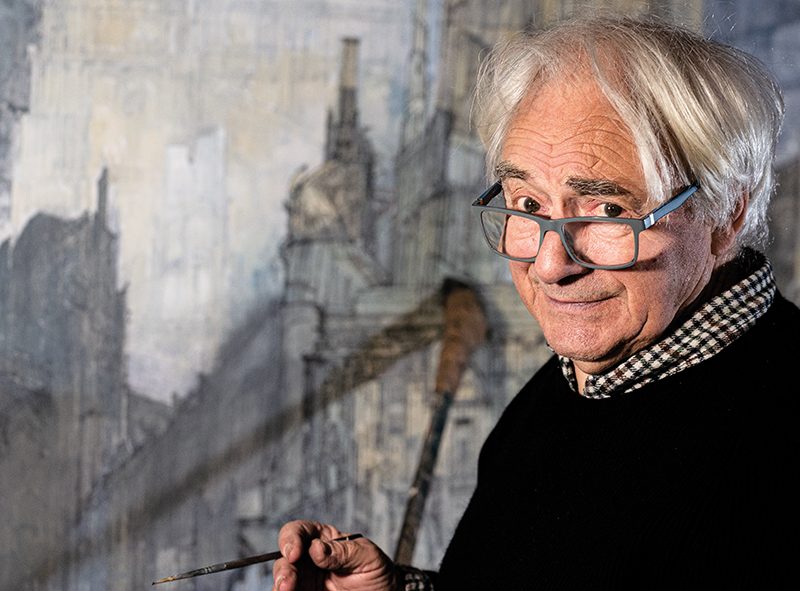 In Livorno, not far from the sea and the Quattro Mori monument, there is a world in which an almost scientific disorder paves the way for an imaginative dimension of lines and colours telling stories

HERE THE ROMANTIC CONCEPT OF GENIUS AND UNRULINESS IS EXPRESSED AND EMBODIED IN A GREY-HAIRED MAN, who reserves his irreverent gaze for art and life, typical of someone who has never turned his back on the child he once was and who welcomes success with total disenchantment. The encounter with the contemporary painter from Livorno, Raffaele De Rosa, is a clash with a disarming freshness and with an imagination drawing from the memories of a childhood lived in a bubble, which is the point of departure of an imaginary journey. 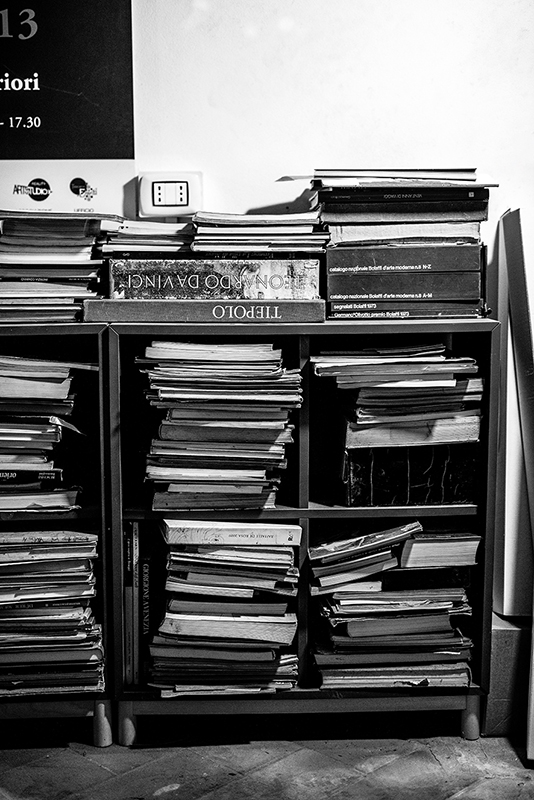 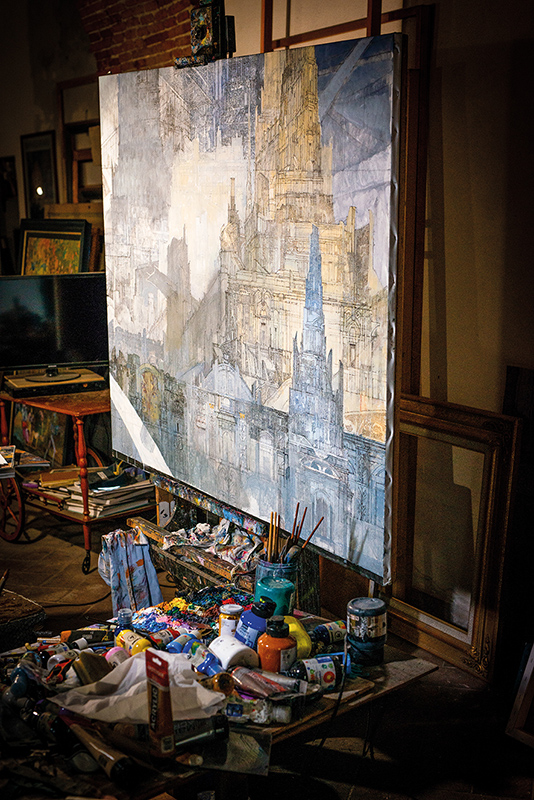 Raised with his grandparents in Pomarino until the age of sixteen, Raffaele De Rosa chose to return to Livorno to help his family, and this is the place where his artistic vein, which he had already put into practice, but which was still immature, ultimately takes over. Today, many art dealers are talking about him and he has countless personal exhibitions on his track record. However, when asked ‘who is Raffaele De Rosa, this painter with an abstract personality?’ – as he likes to describe himself – he replies: «I don’t know». De Rosa spends his childhood and adolescence with a Bolshevik and a bigot woman, in the attic of an ancient building, so long and narrow that it looks like a ship. Entrusted to the care of an overly protective grandmother, the child Raffaele spent his days drawing on a blackboard next to the stove. «I drew whatever I was experiencing, I drew my future life as I imagined it would be, as I listened to the stories of people much older than me, the only companions with whom I shared my childhood». These are the emotions Raffaele experienced during those difficult years, far from the loving family embrace; emotions which he can think back on today and draw on the canvas. «Painting is like psychoanalysis, it is a way of throwing our problems at others», he tells me with a smile and with the persuasion of someone who knows how to interpret life, even if in total lack of awareness. 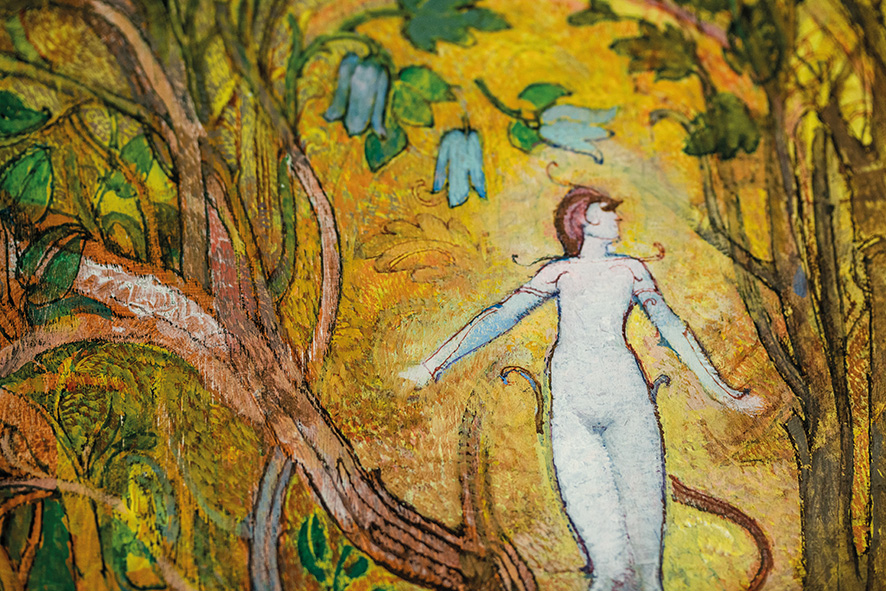 1969 was the year of his first solo show. Many others would follow, both in Italy and abroad. Some of De Rosa’s exhibitions abroad include France – Maison de l’Unesco and Union de Banques in Paris; Spain – Building of the Italian Embassy in Madrid; Germany – Galerie Helga Wicher in Wuppertal – Galerie Bollaghen in Worpswede – Villa Rolandesk in Remagen; Israel – Mishkenot Sha’ananim of Jerusalem; Sweden – Italian Cultural Institute in Stockholm – North Gallery in Örebro; Denmark – Italian Institute of Culture in Copenhagen; Belarus – National Library in Minsk.

Speaking with Raffaele De Rosa is like witnessing a delicate dance, in which the music unfolds in rhythmic, surprising, and never banal movements. It is no use asking him questions: his story is an extremely personal journey, marked by encounters, experienced events, unexperienced events, and by everything that he has captured with his gaze, only to suddenly free himself from it. «When I paint, I walk inside my work. It is as if I were on a journey and, once it is over, everything becomes the past. I do not deny anything I did, but I would never be able to reproduce a painting I made twenty years ago. My urge to narrate myself changes constantly and each time I undertake a different journey». This is why throughout his career, De Rosa tends to shy away from relations with those art dealers who, based on careful market research, tell him what he should or shouldn’t paint. 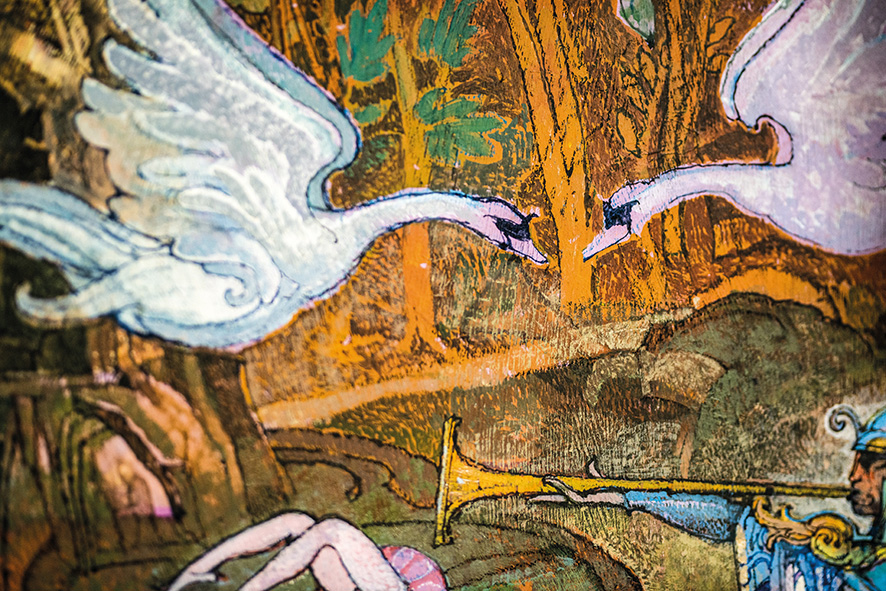 The artist’s works are a unique and original example of fantastic painting. In 1975, he began working with Graphis Arte in Milan. In the 1980s he exhibited in Copenhagen at the Italian Cultural Institute, at the Art Expo in New York, in 1984 he held an exhibition in Jerusalem, and in 1985 in Paris at the Maison de l’Unesco. In 1989, the company Parnassus set up numerous exhibitions in public spaces for him and his name began to circulate in university environments, arousing interest among specialists in anthropology and popular traditions.

His return to Livorno was decisive in his life as an artist: his father wanted the first of his three children to look for a job and help the family financially, but no job could stand up to the indomitable creative and meekly rebellious vein of a young man attracted by the many painters and the many art galleries that peopled the city at the time. That was the moment when he realised that he wanted to paint, despite having no specific technical notion to support the prodigy which, even today, he does not recognise as a talent, but describes rather as a need to feel good about himself. «When I paint, I go back to when, as a child, I used to draw on that blackboard». The imaginary architecture of his works is the same with which his mind constructs its feelings, and his soul remains anchored to a genuine purity that makes him a free artist. Free enough to show up at the age of sixteen in front of the police station and ask to be arrested. Strongly blamed by his father because he was jobless, he had considered jail as a possibility to have accommodation, a hot meal, and, above all, enough time to devote himself to painting. He did not spend a single day in prison, but at the outset, his career was certainly turbulent. 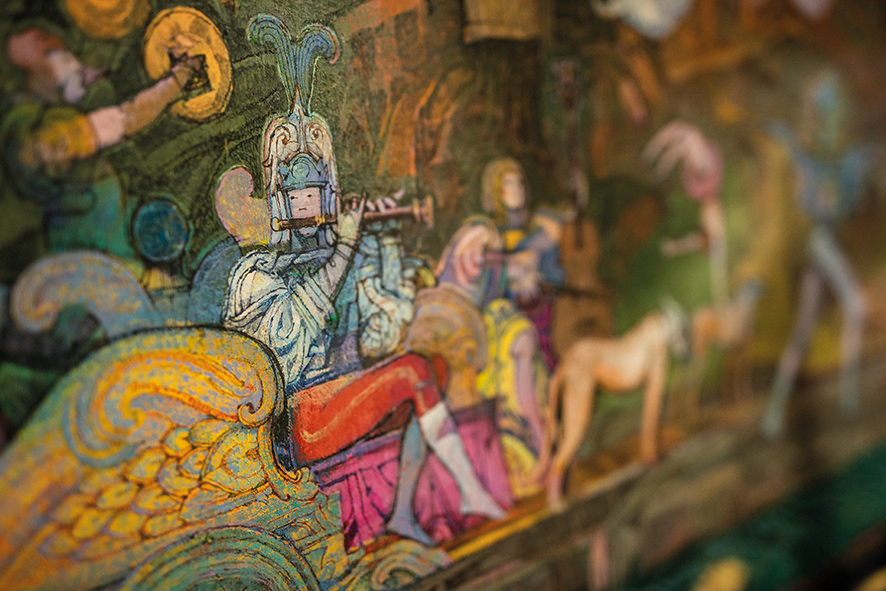 His first works, which include sketches declined in abstract geometric shapes, resonate with the legacy of Cubism, even if the young Raffaele still ignored the existence of painters like Picasso or Braque or Cézanne. The same lines are still present in his works today with their rigorous architectural systems of imaginary cities which, however, also claim soft and sinuous features, exasperated by a search for vivid and communicative colours, which describe a dreamlike world of distant battles, that ties him to his past, and his eternal child-like enthusiasm. De Rosa has a close and intense relationship with colour: «Through my drawing I narrate, but it is with colour that I look for and find emotions». 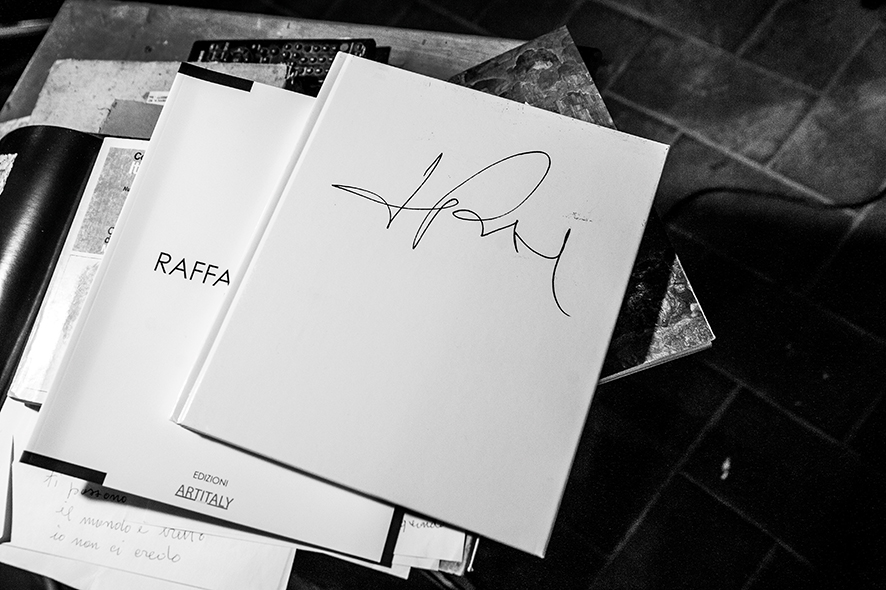 Since 2002, De Rosa has been permanently exhibited at the Havens Gallery in Columbia, South Carolina.

Whether it is anger or happiness, all the feelings that the painter experiences are masterfully interpreted by colour, a means through which he conveys his inner self to the viewer with a wealth of hues and effects that seduce and narrate. The skillful alternation of different techniques, the story of current events mixed with memories, myth, fable, are the red thread in his art. If there is anything that influences his work, certainly literature plays an important role. What he focuses on and what inspires him most, however, are not so much the texts themselves, as the authors’ personalities and their experiences. As he approaches Calvino, Platonov, and Cervantes, just to name a few, he lets words guide the graphic interpretation of everything he wants to represent. 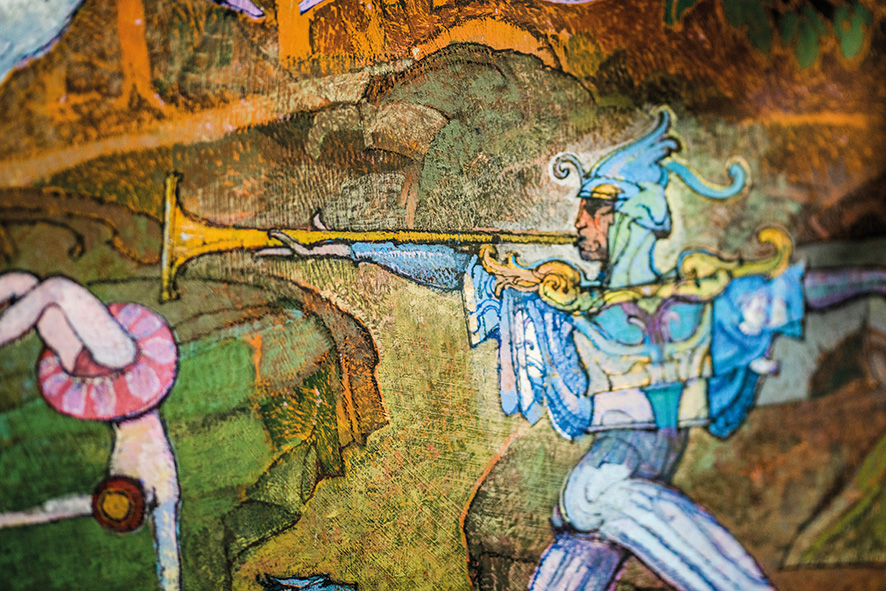 A lover of theatre, he adopts a style that reveals his admiration for artists such as Dürer, Mantegna, Pisanello, or Piranesi, but which becomes the imprint of an unprecedented pictorial genre. Even if, according to him, painting is a useless thing, and he tries to break out of classic schemes to tell his stories. There is too much responsibility connected with the label of ‘artist’: «How can I be responsible for what I paint, how can I be responsible for my moods? I never ask myself questions: I just walk inside the work and that’s it». Once the work is finished, De Rosa remains a mere spectator. When one of his works still stays in his studio and the desire to travel inside it re-emerges in him, he resumes his journey and gives it new light, now aware of what he is looking for. An awareness that vanishes in the exact moment when he comes back from that painting and the work is finally completed. Perhaps this is why he never feels like giving any of his works a title, an approach that reveals his impalpable personality, which does not seek glory but rather surrenders to the movement on the canvas with which he accompanies the viewer into an imaginative dimension which nonetheless is paradoxically close to a tangible reality. The charm that the man and the painter emanate together puts me in the corner like in a boxing ring and I remain motionless and incredulous when, in front of one of his paintings, he asks me: «But why did I paint this?»

(The visionary poetics of an irreverent painter – Barchemagazine.com – August 2021)