Quick Gyro X2, you make me turn… like a Gyro stabilizer 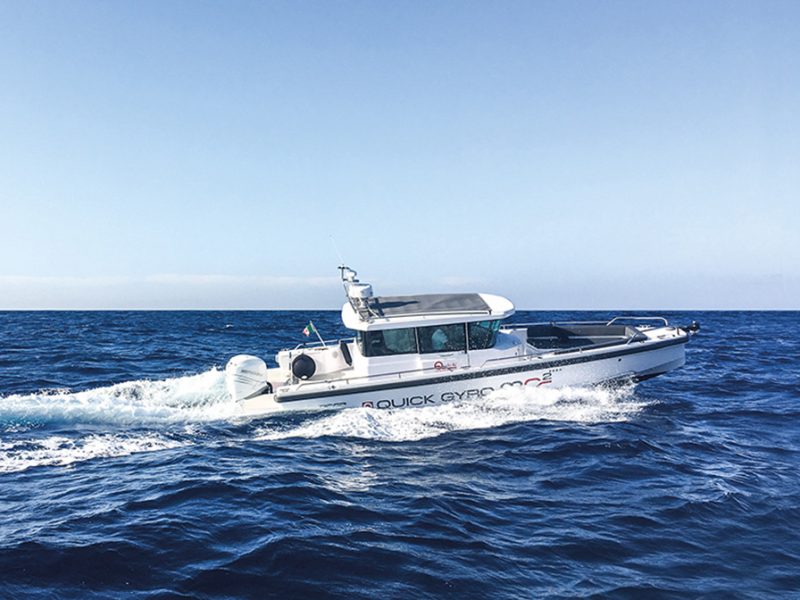 Quick Gyro X2 is the smallest in the range. It is designed for small boats that need stabilisation, but don’t have a generator on board

TWO GOOD THINGS AT ONCE. That is basically what you get from a 12-volt gyroscopic stabiliser. They have been created to meet the needs of small craft, and are suitable for boats of less than ten metres. They really don’t take up much space – we are talking about a cube, with sides of less than half a metre. More precisely, it measures 42x42x47 cm. So, a bit more than an old microwave oven. It is easy to find a place for it in the bilge. And the lower it is positioned, the better it works.

Like other products by Quick, it uses a horizontal axis. What is the benefit of that? The weight is distributed across two bearings and the gyroscopic stabiliser works at around 5000 rpm. That is not a huge amount, and so it doesn’t need a water-cooling system. They describe the heat as being naturally dissipated. This means they work even better with small boats. The reduced size and the fact that everything fits in a cube with sides of less than half a metre, as well as being easy to install, even on a boat that is not a new build. Another essential feature is the power source. The X2 only uses half a kilowatt, less than a windlass. So, you don’t need to have a generator on board. You just need a good alternator and a battery pack for it. But nothing else. 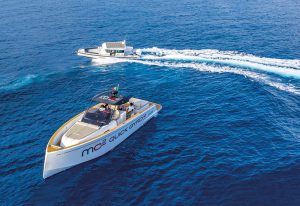 We tried it out on board an Axopar 28. You just need a few minutes, and actually not that long, to get to the 5000 rpm needed for stabilisation. So, if you set out and don’t find you need to reduce roll, the gyroscope will keep its revs up, but not get involved in setting the trim.

The day we went out in the Gulf of Genoa there weren’t especially big waves, but there was plenty of traffic, especially when going past the sea wall, as there always is. The Axopar 28 is an agile, sporty boat. It jumps through the waves, hugs the surface when turning and is basically fun and easy to use. And – to ensure it can get that sporty performance – it isn’t very wide. At anchor, and taking the waves on the beam, it really suffers. It is actually rather unpleasant. Just to be clear, it would be with any smaller boat, given that the waves are produced by cruise ships, ferries and cargo ships. But you just have to push a button on the plotter display to activate the X2 and noticeably change things. 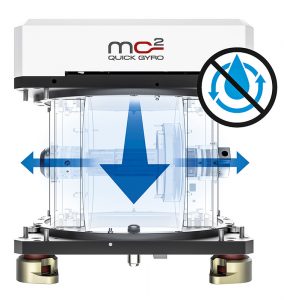 The horizontal axis used by Quick stabilisers mean there is less stress on them, and so they produce less energy. That means that they don’t need water cooling.

The stabilisation really works, and has an immediate effect. The effect of a gyroscope is perhaps even more obvious on a smaller boat than it is on a mega or giga yacht. And nowadays all of this is possible, even without having a generator. The level of comfort it produces is obvious. You should think about all the times that you have to wait in front of a bunkering dock to refuel, or when you are at a busy mooring with lots of boats around. But I also think about people who use the boat for fishing. Like deep-water, big-game fishermen who wait for hours on end in the middle of the sea, with the engines off as they wait for some big catch to take the bait. They are condemned to rolling around crazily. Or rather they were, because there is now a solution. Fitting a 12-volt gyroscope it in the bilge or a locker. The sound it makes – or rather the lack of sound – is another positive.

When I turned on the sound meter, the noise it registered was made by other boats as they passed close by. And that made me think of the advantage of having a boat that is stable and doesn’t roll, without a lot of background noise, while you are at anchor, perhaps when you are enjoying a snack, or a proper lunch. Comfort isn’t something you want when under way, but also – and above all – when you are at anchor.

(Quick Gyro X2, you make me turn… like a Gyro stabilizer – Barchemagazine.com –
April 2020)