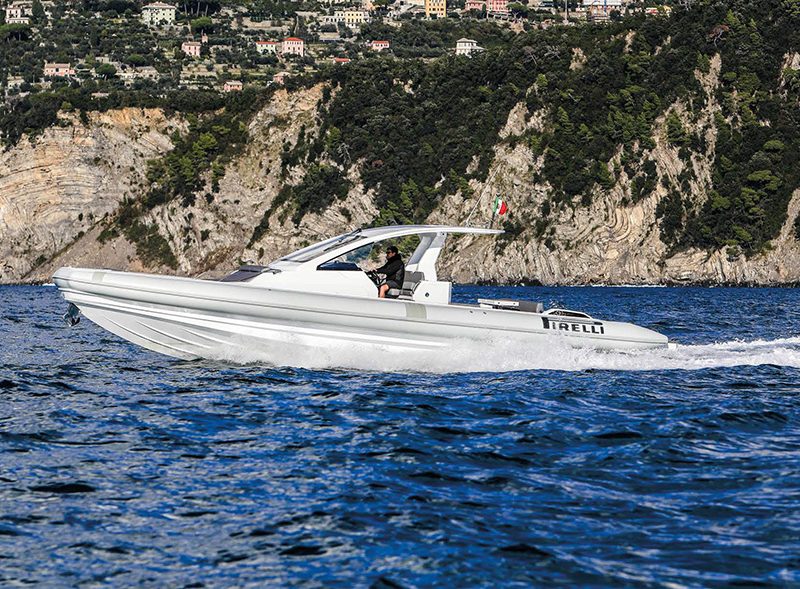 Mannerfelt hasn’t disappointed and has created a practically perfect hull: stable, safeand quick, even when the sea is particularly intimidating

WHAT MANNERFELT HAS DESIGNED FOR PIRELLI IS NOT A HULL LIKE ALL OF THE REST, IT IS AN INCREDIBLE HULL. The sea conditions that we found at Genoa were tough, so much so that upon our return to harbour, an orange alert was issued, which some people were to call a slightly-reduced red alert.

Just as soon as we left the protection of the harbour wall, there were waves of around a metre, and the wind blowing at eighteen knots. But the more that we accelerated, the more I thought that this RIB goes through just the same kind of transformation as the incredible Hulk in comic books. It doesn’t change colour – it’s grey, and doesn’t turn green – but it gets its muscles out. The feeling is similar to what you could get with a four-wheel-drive SUV that also has the speed of a sports car: with stability, safety and performance. The hull has been well done. In these conditions, I wouldn’t ever have imagined that it could handle all of the speed that the Pirelli 42 can throw at it. You would normally stop before that. You would try speeding up, perhaps protecting yourself as much as possible, and taking the seaside on, and spending time in more sheltered parts of the coast without the risk of coming across other boats. But you don’t need to take any of those precautions with this RIB. The hull is always stable, even when I opened the throttle right up so we got to 3640 rpm, and 46.2 knots. I did so calmly, waiting for the GPS device to take its time to show me the top speed. Adjusting the trim to reach this speed was no trouble. Everything was easy, even though the sea certainly wasn’t comfortable at that kind of speed. 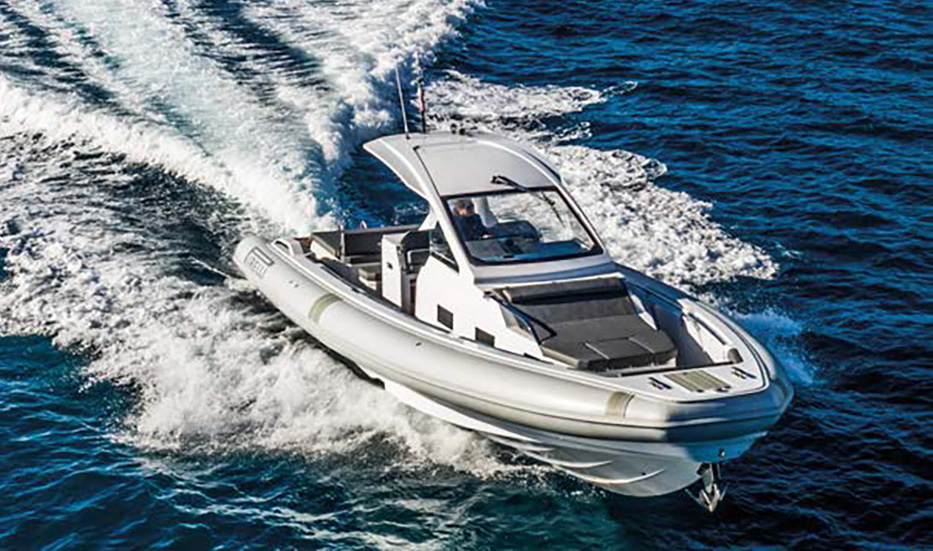 The hull pushed aside the waves without jumping too much and most of all it didn’t suffer from lateral strain. Even though the waves were rippled and there were cross waves because of the wind, the PIRELLI 42 stayed on course and hardly appeared to notice. It is true to say that what you can find in the engine room is less powerful than what you get from the outboards, but it is nevertheless a pair of 400 hp Volvos with stern drives. With outboards, you can even get to 1,200 horsepower, and get a top speed of as much as 55 knots. The hull shows its good points not just in terms of performance and stability, but also because the deck is dry. During the test, the wind blew at around 18 knots. After my turn at the helm, I sat down on the sofa in the cockpit in the stern. Despite the turns and manoeuvres that could have caused spray to reach the deck, not even a drop got there. That is also thanks to the structure, which protects the driving position with seats for the helmsman and assistant. It is a single block that continues from the windscreen and becomes the T-Top, and that means that the helm station is very well protected, and of course, the cockpit also benefits from this protection.

The other structural element that helps to keep the deck dry is the height of the sides. The tubes are not sitting on top of the glass fibre structure, but are external to what could be considered the sides. The lines are not heavy and seen from the quay the boat always has a sporty look. The benefit is that it gets protection from the spray, and greater safety when moving around on board. The side passageways are wide, and to this, we have to add the high sides, which give a feeling of proportion, and – last but not least – the fibreglass sides have a stainless steel handrail looking inwards and which runs from deep in the bows right to the stern. You can’t see that from outside either, and so it has no impact on the boat’s look. But it’s there, and it is very useful. I tried getting around when we were underway, although the sea was rough and we were moving fast. And I never got the feeling that I was in danger, or that there was a chance of my losing my balance. 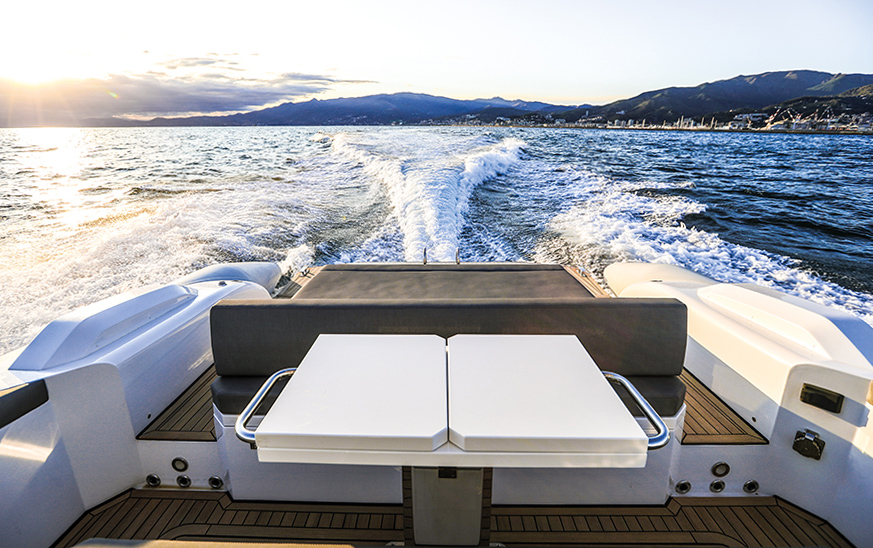 You can also feel the safety from the layout of the deck. You can get around onboard easily, because the walkways are spacious throughout, and move uninterruptedly from bow to stern, and there are grab bars everywhere to hang on to.

The deck layout is convincing even when it comes to the bow area, because it means that a continual walkway can be used, without any kind of interruption. Indeed, the sun area has been put on the deckhouse, and right in the bow you can find a sofa that looks back, and then the anchor locker and winch. There is room to get around unobstructed between the sun lounger area and the sofa. 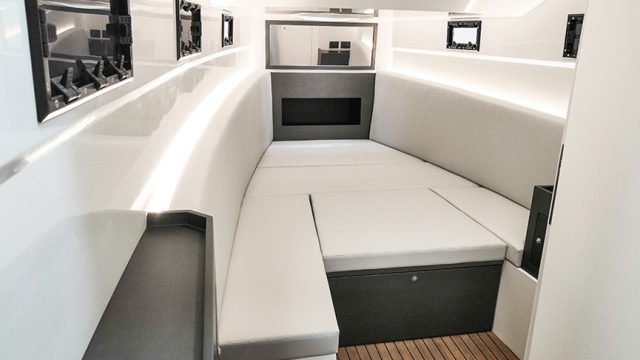 The interiors are customised and have a lot of room. More than abundant if you choose to use the PIRELLI 42 as a day boat, but also comfortable if you want to set it up for short and medium cruises for two people. 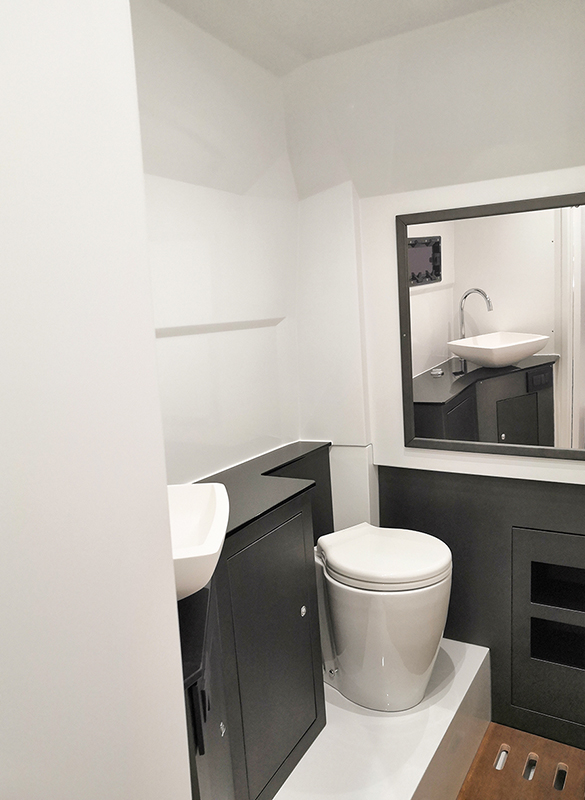 And then there are the interiors with a large, transformable dinette and a separate bathroom area, which is also generously sized. The interior volumes are also good for anybody who wants to use it for short to medium range cruises. The entire set-up, in terms of fabrics, colours and materials, is entirely customised. What the owner has to decide is whether they want more of a cruising approach or more of a day boat. 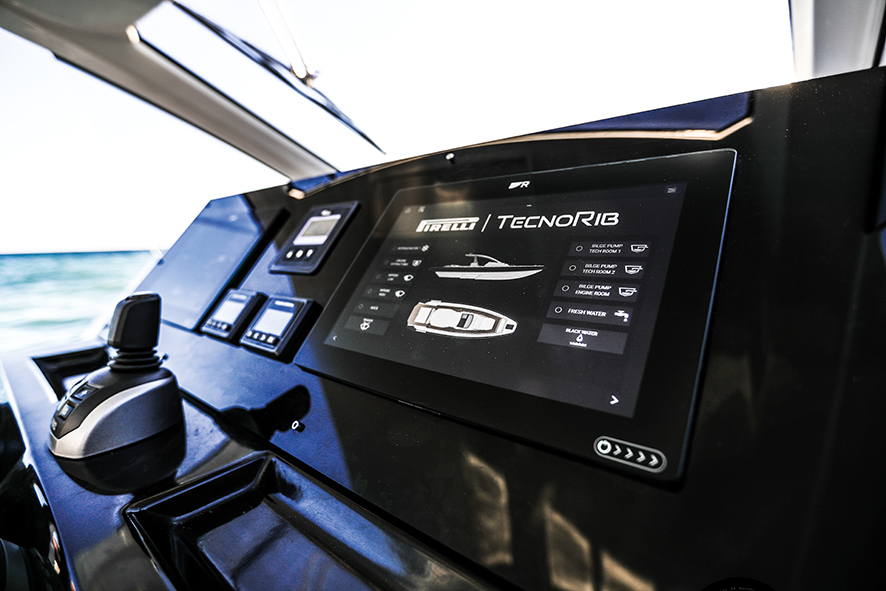 The position for the helmsman and assistant is well protected by the windscreen that continues round to become a single element with the T-Top.

Engine room
There is no lack of options. You can choose between a diesel or petrol inboard-outboard, or an outboard. The range of power options is also substantial – from 800 to 1,200 hp – so you can go from lower speeds (if 46 knots qualifies as slow) to more sporty ones, around 55 knots top speed.