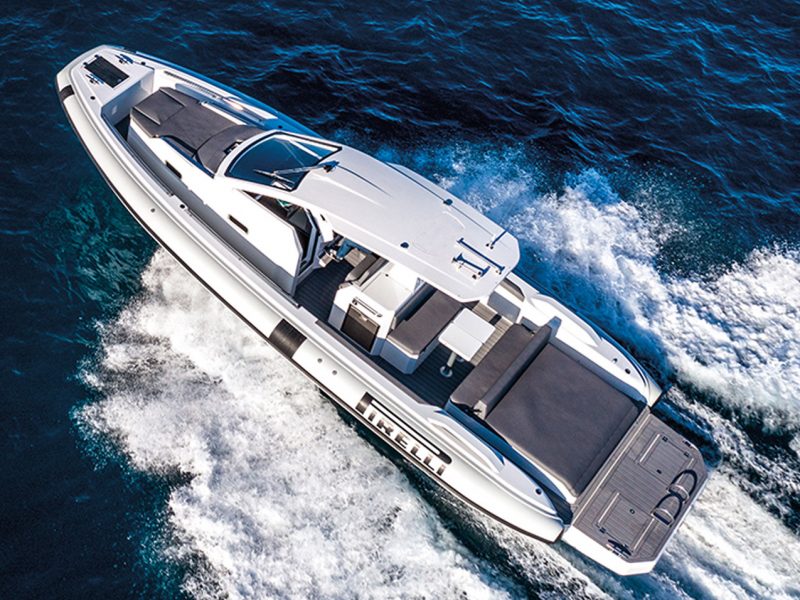 After the PIRELLI 42, Mannerfelt has designed a hull with a double step that manages to combine stability and performance even on a 35-foot boat

STABILITY AND PERFORMANCE – HOW MANY TIMES HAVE YOU HEARD THAT DESCRIPTION? I too have heard it millions of times in press releases, but for the PIRELLI 35, I can’t find any other way to say it. I first tried to explain it with figures and then with feelings. The hull project comes from the PIRELLI 42, which has shown some excellent qualities. When I tried it out at Genoa the sea was distinctly demanding, but the boat didn’t suffer from that. This one is smaller and logic would suggest it should be even more difficult to get a good result. 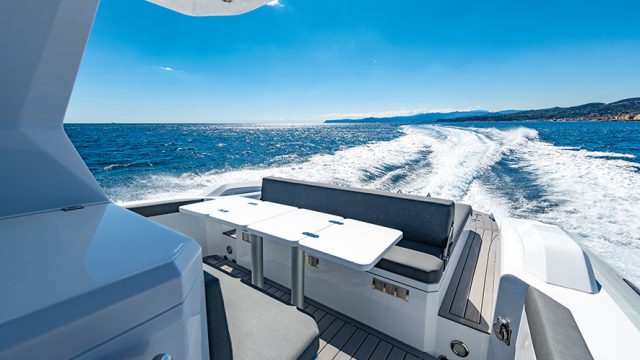 The engines aren’t excessive: two MerCruiser 6.7s each turning out 300 horsepower with a Bravo Three sterndrive, so the one with the double counter-rotating propeller. You can instead opt for a pair of 350 hp engines, and if you move on to diesel, the outputs available range from 600 to 640 horsepower. And finally, there is also a version with a pair of 300 hp outboards. So basically, the engines we were using weren’t the strongest, but despite that, the hull rose out of the water at 9.9 knots. This is unquestionably thanks to the two steps. They increase the load-bearing capacity and also mean that it can plane without much effort. Regardless, getting out of the water at less than ten knots is a really surprising result. And the same is true for the other speeds, from economy cruising to fast cruising, and right up to top speed. With the throttles opened right up, despite some waves, we got to 43 knots. 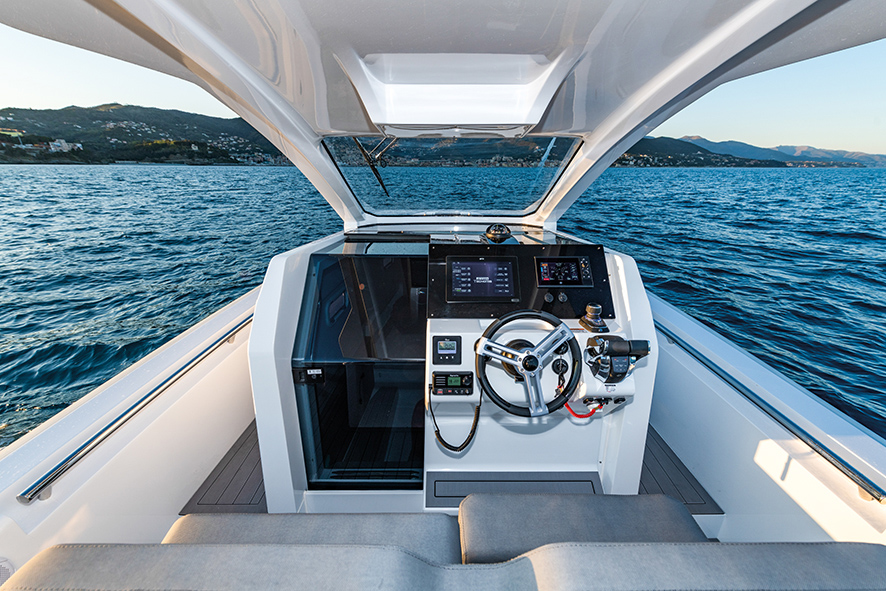 The windscreen and T-Top ensure excellent protection both at the console and for passengers sitting in the cockpit.

Fuel consumption is fairly contained, both for a snap reading and in terms of litres per nautical mile, which ranges from three to just over four litres. But the hull doesn’t just have steps. Mannerfelt has also designed many support pads, which run from stern to bow. The outcome is a surprising amount of stability, without a loss of handling. The PIRELLI 35 is very easy to steer. It feels like playing a video game, but one of those in which you never end up crashing. It turns easily, even at full lock and high speed and above all isn’t affected by waves. There wasn’t a lot of them, but there were enough to trouble many ten metres or a bit longer boats. When it takes them on the bow you just have to adjust the throttle to avoid jumping too much. You don’t ever find yourself in a “hole” – either you fend off the wave, or you ride it, but you never get hit by it. It is always comfortable underway. 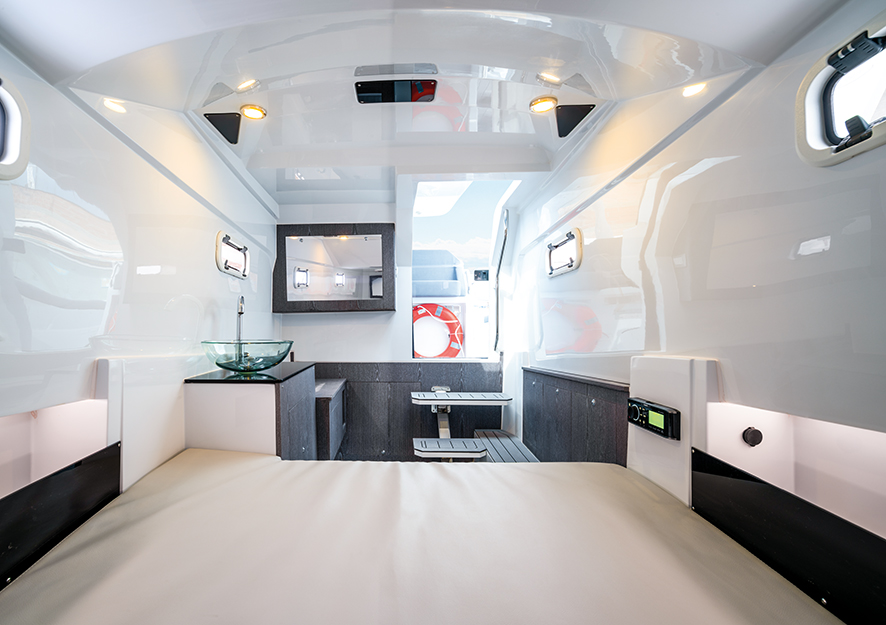 The RIB is easy to steer, and it is also easy to control the speed. The good feeling that you get at the helm also comes from other factors. To start with, the protection. The solution comes from a windscreen that transforms into the roof of the T-Top. It is a single piece without mounts, which would otherwise block the view. The boat always keeps a horizontal trim. The horizon is always visible over the bow, even before starting to plane, which as mentioned, happens almost immediately. And that is not just because you only need ten knots to rise out of the water, but also because you reach that speed in three seconds. And in three seconds it is nearly impossible to crash against something or someone. 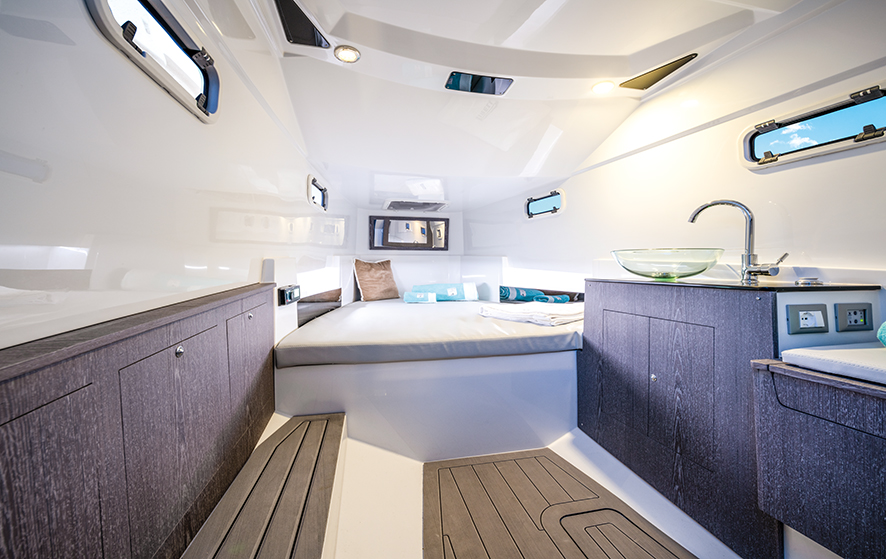 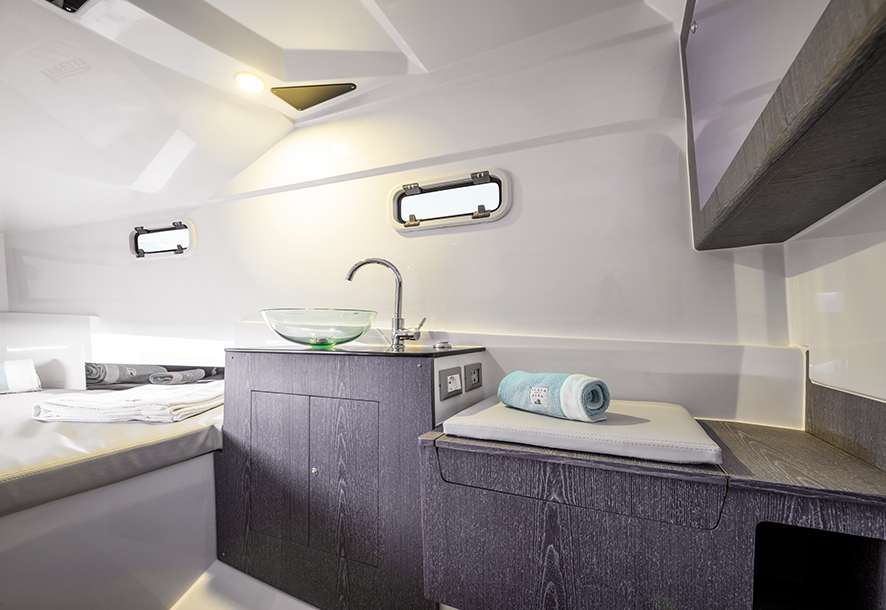 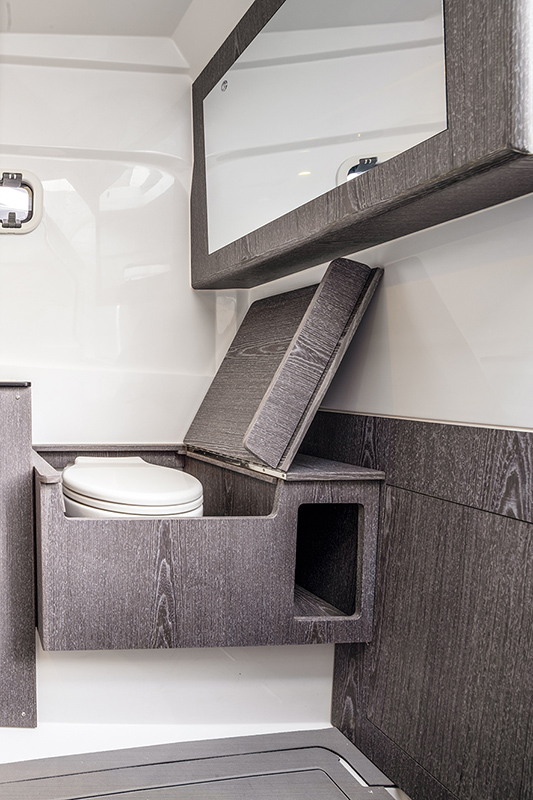 The options for the interiors include open space with the bathroom fixtures hidden in the furniture, or a separate bathroom and a double bed.

As well as the protection it offers, the ergonomic design of the bridge is to be appreciated. Everything is there to hand. From the throttles to the large display with navigational data, maps, domestic appliances and monitoring of the onboard equipment. The T-Top looks tough. It is entirely in fibreglass and going aft, there is just one column, but it rests on the bar cabinet in the cockpit. Despite the lack of frame and bulky superstructure, its solidity is nevertheless guaranteed. The T-Top windscreen also helps the cockpit because the effect of the protection extends back to the stern. 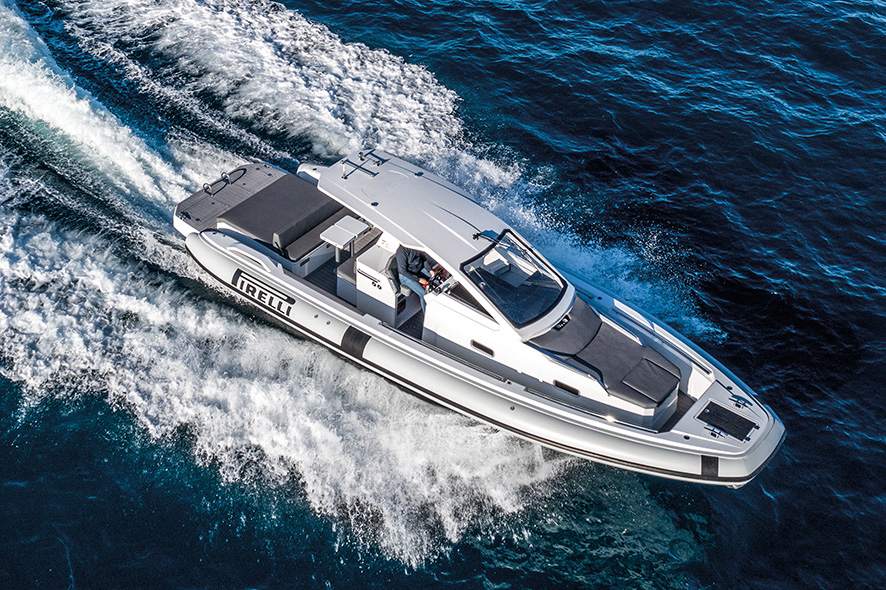 The two steps and a large number of lateral support pads play their part in creating a stable hull that is easy to handle and sporty. It doesn’t use a lot of fuel at any speed, and there is a significant amount of acceleration. Three seconds to start planing, and 23 to get to the 43 knot top speed.

The midships section, where the steering panel and cockpit are located, is slightly lower than the bow and stern areas. As well as adding a feeling of protection, this helps to give a feeling of sporty lines, especially if the PIRELLI 35 is viewed from outside. You can get around easily onboard. The gangways aren’t huge, but after all, you are on board a 35-footer. The breadth of the passages is always enough to get around without any problem. And there is also no lack of grab handles. They are located both alongside the bow sun pad, which is over the deckhouse and inside the bulwarks. Deep in the bow, the locker houses the horizontal axis windlass, while the anchor comes out of the hawsehole. That way the door of the locker, which is covered in the typical tyre grip, can be used to get down to land when moored bow-first at the quay.

At the other end, the large beach area at the stern is easily accessed. That is thanks to how the boat is powered. The two engines with stern drives take up less room on deck, including vertical space, compared to outboards, and thus have the advantage of not altering the boat’s sporty design and ensuring that there is more living space. 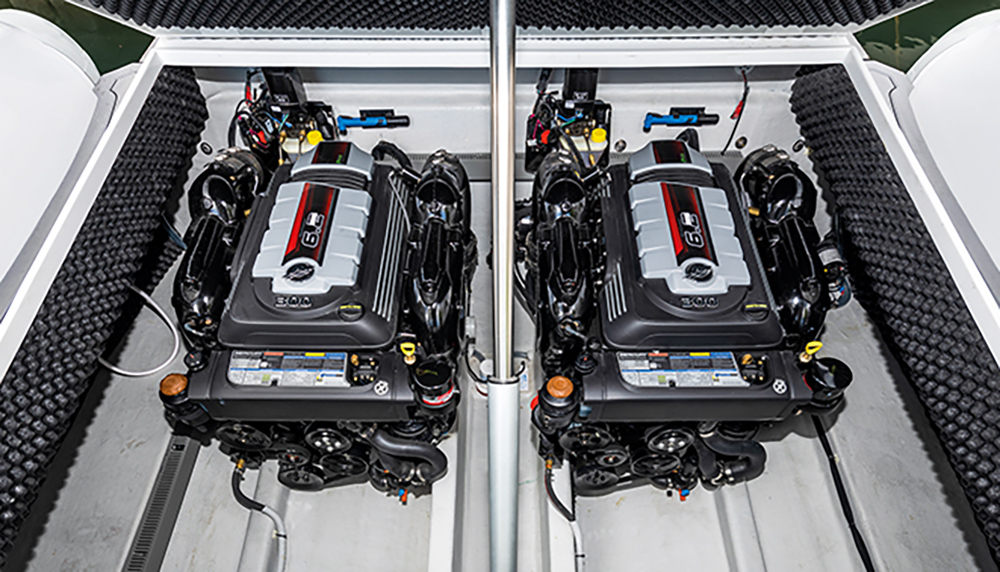 Engine data
A petrol-powered inboard-outboard producing 600 to 700 horsepower, or a diesel engine producing 600 to 640. And, as if that weren’t enough, also available in an outboard version with a pair of 300 hp motors. There is no lack of options.