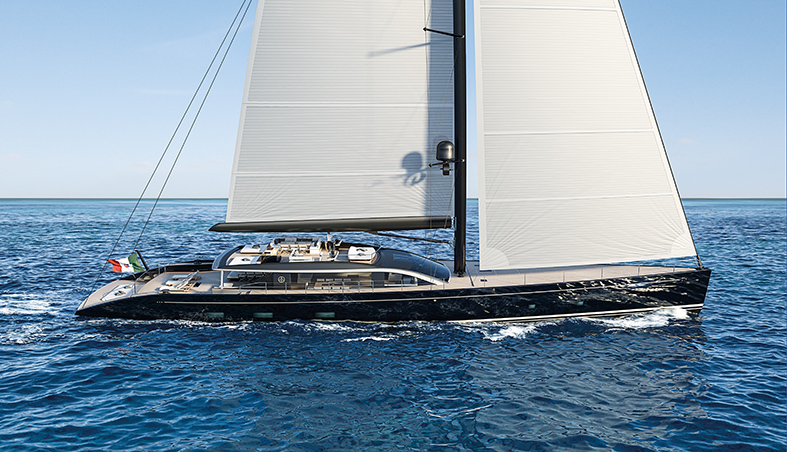 Promoting the brand and reinventing the superyacht “product”: Lamberto Tacoli, chairman and CEO of Perini Navi, tells us about what he has done to relaunch the shipyard

LAMBERTO TACOLI TOOK ON A PARTICULARLY DEMANDING CHALLENGE when he joined Perini back in 2017. The yard was in trouble at the time, with just a handful of orders and an uncertain future.

Despite undoubtedly being a high-end name, one that had always been synonymous with sailing ships worldwide, Perini had a great deal to do. Almost two years later, the yard has seven vessels under construction, with an expected 2019 turnover of 80 million euros and a number of important projects in the pipeline. 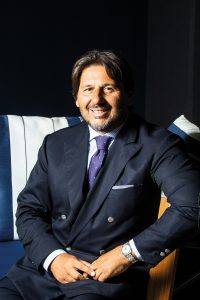 These include the ambitious reworking –twenty years on –of the 88-metre Maltese Falcon, a three-mast yacht that represents a real milestone in the history of luxury yachting.

Its relaunch by Perini began with an industrial plan developed by Tacoli. As he himself explains, «It’s not one for an investment fund. Here at Perini I’ve had the good luck to find some travel companions (the Tabacchi family who took over as the majority shareholder from Fabio Perini, ed.) who do not judge the results on a quarterly basis, as is the case for those operating on the stock market, or within the space of two or three years with a view to a fast exit. Ours is an Italian industrial project that aims to take this company back to where it ought to be».

Well aware of the strength of the Perini brand, a few months after his arrival he decided to shelve the Picchiotti brand, used for motor yachts until that point, and to just use the Perini name for sailing ships and motor yachts. This ensured that everyone was working for the same company, the same brand, involving them in the same challenge. «I didn’t like having a company with two hearts», he stated.

Sails and motoryachts speak the same language today, marking a new starting point for the firm. A strategic decision was made to expand the market by producing some smaller vessels: «If I mention Perini, everyone automatically thinks of a sailing ship measuring at least 50 metres long, but an entry-level vessel of these dimensions would cost more than 40 million euros. The world is getting smaller and our yachts are targeted at a restricted niche within a sector that favours large, high-tech sailing boats. We had to introduce new projects in order to expand our potential market». 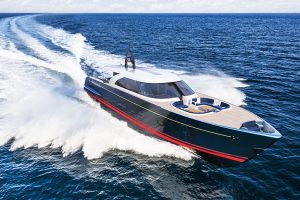 This led to the development of the SY 42 E-volution, the smallest in the new range that will also include a 47 metre and a 56 metre vessel, designed to attract those who gravitate around the world of maxi regattas, accustomed to 25-35 metre vessels. «The
SY 42 E-volutionwill be a Perini Navi  in every sense. For the first time, we entrusted the hull design to Reichel Pugh, famous for its high-performance hulls. I have always maintained that Perini doesn’t have to be the highest performing, although it must be high performing. Nevertheless, it has to be the most comfortable, the most spacious and the most attractive». The new design seems to have proved a success, with two boats sold in six months.

As regards motor yachts, Tacoli assigned three designers with the task of developing three models based on three identical platforms. «Investing in naval platforms where the look can be adjusted while keeping the basic technology as similar as possible is part of my philosophy».

This led to the development of the following lines: Argonaut, a in-house design, Heritage, designed by Zuccon International Project, and Voyager, designed by Philippe Briand. These important innovations have shaken up the Perini Navi brand and its way of conceiving and designing yachts, and the market has shown its appreciation.

«You don’t sell seven ships in just under two years if the market doesn’t trust you», specifies Lamberto Tacoli. «Of course, Perini is a brand that generates trust, but then you have to build the ship. The Tabacchi family has guaranteed financial stability and entrepreneurial professionalism, having always been involved in enterprise. Over the next few years, we’re aiming to make a turnover of between 120 and 150 million euros, which means having between seven and nine sailing and motor vessels in production at the same time. I hope that sail yachts will account for 60% and power yachts for 40%». 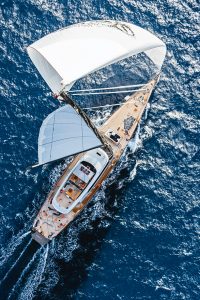 This is a challenge that is also being tackled in terms of technological innovation: «Innovation is a word that is often used inappropriately.” Tacoli says. “The yachting industry still has much to do in terms of innovation, especially as far as environmental sustainability is concerned. Nevertheless, I’m convinced that the development of propulsion systems is something that has to be explored. It’s a bit like cars, with customers no longer being asked whether they want an electric or a hybrid car…soon they’ll only be electric. As a result, the nautical entrepreneur has to make the decisions. The One Ocean project is very close to Perini’s heart and so the brand strives to be as eco-friendly as possible. We, as an industry, have to support both the hybrid phase and the Zero Emission Mode».

The brand took the first step in sailing with the E-volution models that can be equipped with a hybrid engine. «Then there’s the subject of nautical design. I think we need to go back to simpler things. I’ve never been a fan of giga-yachts. It’s possible to create truly exceptional vessels with more rational, simpler and cleaner volumes, as well as more respect for the sea. Perini is helping me with this, because sailing already works along these lines and I hope motor boats will do so too».

Perini Navi is one of Italy’s most prestigious brands, something that is very important in this sector.«Italians are the best, the most creative. We’re ingenious, we’re captivating, we transfer the culture of Italian production to our products. People come to Italy willingly. It’s a good country, the birthplace of Leonardo and Michelangelo. We’re a wonderful ‘business’made up of exceptional entrepreneurs, exceptional designers and exceptional creatives. This is the ‘hot phase’, as I call it. Then there’s the ‘cold phase’, namely that we Italians have to become more reliable, more like the northern Europeans when it comes to method and process, because creativity often works against precision and punctuality, while flexibility often hinders repetition».