Patrizia Gobbi, yachting in her heart 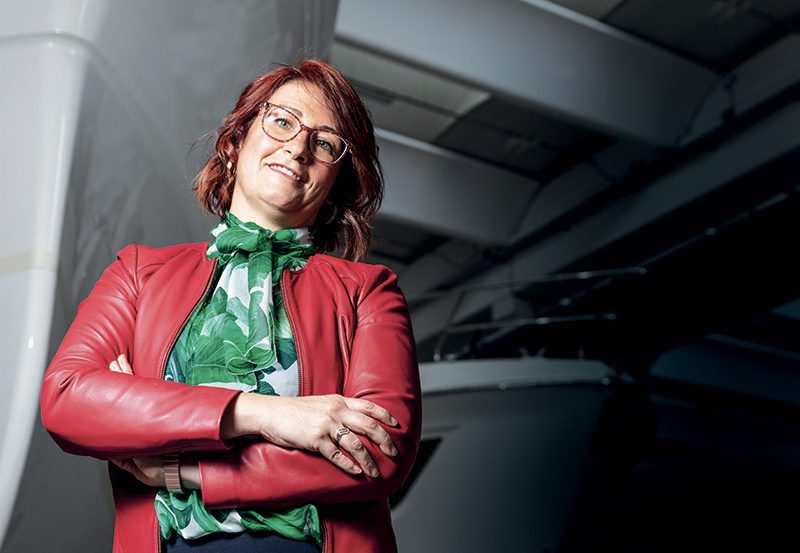 Patrizia Gobbi grew up amongst boats and with the guidance of her father, Angelo, she has become one of the most committed figures in the Italian yachting industry

IT IS JUST BEFORE LUNCHTIME, AND THE SUN IS ALREADY HIGH IN THE SKY. The light is strong and warm. Just behind the entrance gate rise the large industrial buildings of one of the most technologically advanced facilities in Italy. Workers are taking their time enjoying their al fresco lunch. With their white overalls it looks as though they had just landed from space.

We are in Absolute’s large boatyard at Podenzano, a few kilometres from Piacenza. Patrizia Gobbi, the head of communications at the firm, accompanies us across the expansive forecourt. When she opens the door, an army of boats looks sideways at us. There they are, all in a line, looking more human than we are. In the background, you can hear the sound of a lathe. 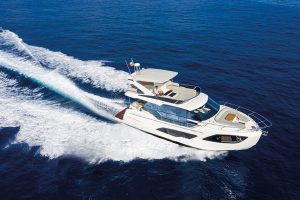 Somebody has decided to delay their lunch hour to apply the final touches. Not much further ahead there is a yacht that is ready to be launched. Where is it going to be sent? «Thirty to forty per cent of our output goes to the US. But we are also doing very well in other markets. The Asian market is continuing to grow. 93% of the boats that we make are sold abroad. The situation in Italy is stable», explains Patrizia Gobbi, who as well as managing external relations, also handles exports and sales. «In Italy we should open up much more, and transform our country into a great hub, that attracts foreign tourists to the sea. We should invest in infrastructure».

She has yachting in her blood. She grew up in the yard with her father, Angelo Gobbi, until it was sold in 2001. But just a year later, Marcello Bè and Sergio Maggi, who dealt with the Gobbi brand at Paolo Vitelli’s firm, decided to leave and create Absolute Yachts. In 2007 Angelo Gobbi became company president.

Patrizia knows all the stages of the work and aged just twenty she helped her father in the sales process. «I was a girl. It was a continual training process», she says, radiant and full of energy. But what is the winning formula to continue to grow? Absolute is a thriving business, which turns over 63 million euros, has 250 employees and a yard that covers over 58,000 square metres. «We produce between 80 and 90 boats every year, broken down into four lines ranging from 40 to 73 feet. And we sell in around thirty countries around the world. The secret is innovating, continually changing and challenging ourselves».

But the fact that the company works and is continuing to grow is also because of “team spirt”, she tells us, while she offers us a seat in a luminous glass room. «We all feel responsible for the product that we want to sell. We are a large, close-knit group where there is dialogue, capacity to listen and reciprocity».

Patrizia Gobbi happily remembers building the Navetta 73: «It was a project that was developed by everybody here, from the design to researching the materials used. It was a unique experience that I carry with me». 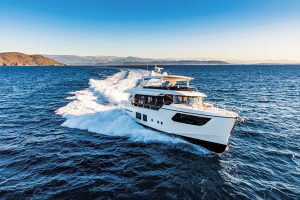 So essentially there is a place for everybody at Podenzano. Especially for women.

«They work in all the different departments here, from the most technical roles to ones with great responsibility». It is an established fact that women are becoming more and more prominent in the yachting world: «We now hold down important managerial roles, and we are slowly also beginning to take on ones that were traditionally done by men. It is a great change».

And then there is technological innovation: automised machinery, new numerical control machines, automated warehouses and geothermic systems. «We can handle all of the stages of the work, from beginning to end. And that ensures absolute quality». From the design concept, coordinated by Sergio Maggi, to the creation of the moulds, assembly and delivery logistics.

Together with us, sitting at the big table in the meeting room is also her ten-year old son. He is flicking through Barche with the amazed look of a child, and he is happy when he recognises an Absolute yacht. He laughs and jokes and, like his mother, is astonishingly radiant. «I am always optimistic», says Patrizia Gobbi. «Being an executive and a mother at the same time isn’t always easy». But Gabriele is a flexible boy and is full of curiosity. «When he was one year and seven months old, I took him with me to the Fort Lauderdale boat show». And now when he goes out to sea, he really loves it.

A passion that is passed down from generation to generation: «I like to take the helm and being at sea. And in the end there is no real boundary between what is free time, and work time», adds Patrizia just before saying goodbye.

And on an Absolute yacht, the pleasure of having free time becomes absolute. That must be because of all the large windows, and the large, comfortable area available. Proof of this is the new Navetta 68 and the new 47 Fly that was presented during the last week of July during the Absolute weekend at Varazze (which has already become celebrated) and then at Cannes in September.

But the new developments haven’t come to an end. Everybody is now busy working on the restyling of the Navetta 52 and Navetta 58. Everyone together. As a team, as always.