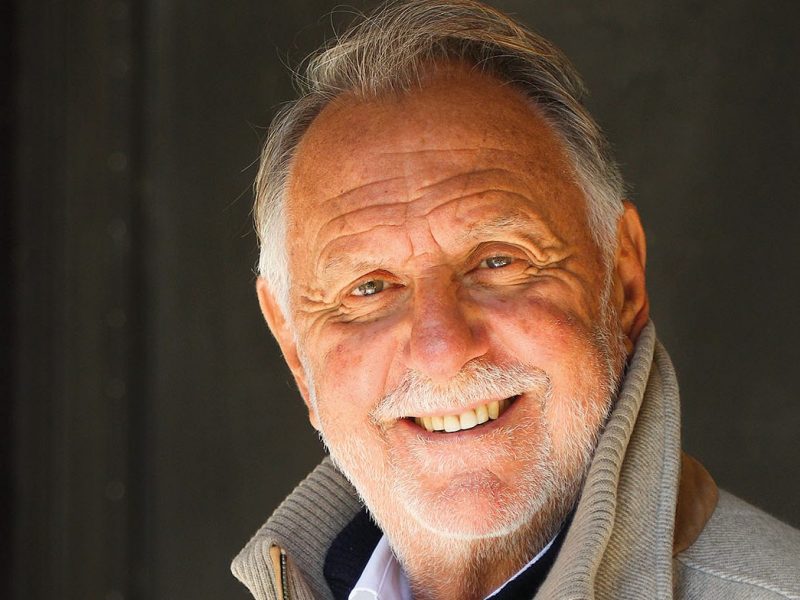 The ingenious, highly dynamic and very charming Norberto Ferretti is considered a real icon on the international yachting scene. A great sailor himself, he has enabled thousands of yacht owners to take to the sea over the last fifty years. We met him in Bologna, his home city when he’s in Italy, where he granted us an exclusive interview to tell us all about his latest project. 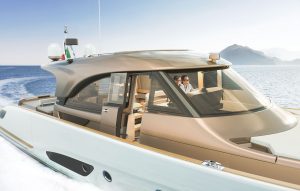 After a long and intense career, what led you to embark upon this new project?
I always followed product development from the very moment Ferretti was established. Two years after our company’s yachting division was founded, my brother joined the firm to look after the commercial and financial side of things. I always devoted myself solely and exclusively to the product, which is what I’ve always enjoyed the most. After the great financial crisis of 2008, I left the group that bears my surname and sold it to the Chinese Weichai Group in January 2012. I coped with it all very well and didn’t mind the fact that I was no longer part of it. I approached life in a very relaxed fashion and devoted time to myself, my holidays and my many hobbies.

However, I missed working with boats and I continued to cultivate my projects, albeit free from the restraints and conditions imposed by the ongoing history of a brand. Out of all the boat models I’ve seen over the years, the one that has always fascinated me the most is the lobster, which sums up seaworthiness, seakeeping, practicality and elegance.

First developed in New England in the 1930s for lobster fishing, they soon became iconic and highly sought-after vessels used by famous figures such as John F. Kennedy. I had everything clear in my mind, the idea of doing something really stimulating constantly playing on my mind. I just had to decide how to proceed. As chance would have it, I met Giuseppe Giuliani, the current owner of Solaris Yachts, in Bologna, who invited me to see his production facilities. Giuseppe was also my brother’s friend and our entrepreneurial destinies have always run parallel to each other, in the motor sector for me and in sailing for him. After founding Grand Soleil in 1974 and taking over the French yard Dufour in 1999, his group was the second biggest in the world. He then sold it to a US investment fund in 2006. Like me, Giuseppe couldn’t keep away from yachts either and, after establishing the motor boat yard in 2008, he also bought Solaris in 2011, making it European leader in the top-end sailing boat segment, with a product portfolio that includes yachts from 50’ to 110’.

Giuliani, having created for years a production unit dedicated to the construction of motoryachts for a very prestigious brand and having built over 6,000 boats in 45 years, has a legacy of boat-building expertise that is almost unique in Italy.

It’s important to understand that I have a reputation to maintain and those developing the project have to ensure top quality production. So, after having visited the motor-division of Solaris, and knowing the industrial boat yard expertise of Giuliani, I understood that my idea could be realized concretely. Looking at their facilities, I was particularly impressed by the motor yachts and the 28-metre boats under construction for a well-known brand.

What was even more surprising was that they had to come up with the engine room design almost from scratch for those motor yachts, creating a small masterpiece. For the design I immediately thought of my friend Brunello Acampora, with whom I had worked in the past. A real expert when it comes to hulls, he graduated from Southampton, the most important school of naval architecture in the world, and studied under the great Renato ‘Sonny’ Levi, one of the fathers of modern motor yachts.

What are the essential elements of this project?
In addition to me as project leader, the main parties involved in the project are Solaris Power, able to combine build quality, technology and handcrafted attention to detail, and Brunello Acampora, a specialist in high-performance hulls with great seakeeping ability, because the hull design is extremely important when using the Volvo Penta IPS system. IPS are a great mechanical solution, but in order to operate efficiently they require specific waterlines. In short, to make the most of this type of transmission you need extensive experience of IPS and hulls.

I imagine that this boat brings all your ideas together. What are its most unique features?
I have always said that there are two ways of building boats: “for show and for use”. It is something I often repeat at press conferences because I very rarely sacrifice function for form. I know and have designed boats of all kinds and in this case I felt like creating a boat packed with great content, rich in substance and overall quality. As I have already mentioned, it is a lobster boat. Solaris had already made one of these boats, designed by Bruce King, back in 1997. I’ve described it as the boat of the man in the blue jacket, in the sense that it’s a boat that identifies you to some extent, albeit without being ostentatious. I’ve created it to be very liveable, very user-friendly for guests and people with children. This is why it has truly unique characteristics: despite having a deck house, it has lowered and protected lateral walkways, openable pilot bridges, a folding door on the driver’s side for access to the walkway (very useful for communicating with the quay during manoeuvres in the harbour), a sun top, a spacious tender garage, and obviously seakeeping ability and efficient propulsion that ensures top performances in terms of quietness, absence of vibrations, very contained consumption and low CO2emissions. In short, a lobster boat reinterpreted in a modern key, called the Solaris Power 55, available in two versions: hard-top and flying bridge. 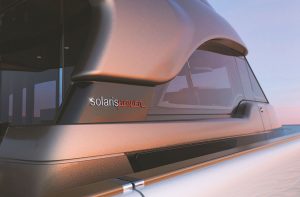 Why did you decide to start with a 55’ model?
Our plan is to produce a complete range, from 46’ to 88’. The 46’ model will be available in three versions: open, hard-top and fly, which will be presented at Cannes together with the 55’. The 55’ will be available in two versions: hard-top and fly bridge, then there will be a 65’, a 76’ and the 88’ flagship. The range will be completed within two years. We started with the 55’ because it allows us to make a two or three-cabin version and makes it possible to achieve very high standards of cruising and navigation comfort, even over medium to long distances. A boat designed for a top speed of over 30 knots, but also able to sail well in displacement mode at 10-12 knots. Ultimately, owners today primarily travel at low speeds, both for reasons of comfort and energy savings, which counts for a lot.

What ambitions do you have for this project and what markets do you expect this type of boat to appeal to?
I think this type is suited to all seas and all markets: Spain, Germany, France, the UK, Greece, Turkey, the Netherlands and the USA, which is the homeland of this type of boat. When sailing the oceans, American owners demand great technical quality and impeccable sea performance. The characteristics of the 55’ make it ideal at all latitudes. I wanted a boat made for the sea, because the sea dictates its own laws. I always wanted it to be very safe, so that even when the sea is rather choppy, it is still possible to sail at speed without fear and without having to be glued to the seat at the helm because the bow walkways are too narrow and the waves splash the deck.

In aesthetic terms, does the design of this boat convey its values?
Definitely. It is a boat with a very sophisticated, pleasant and reassuring design, inspired by the traditional lobster boats of the early twentieth century. A boat that conveys an impression of great strength, and rightly so. I have developed some particularly important functional aspects: with a 55’ boat you go cruising, you go for a swim and you’re always going up and down. Large modern pilot bridges encourage you to live close to the water and so you also need a particularly comfortable bathing ladder. When I see a sports boat made for swimming with a vertical ladder just 30 cm wide I ask myself: “how can a 100-kg man climb back up that?” This product is tailor-made for those who love going to sea.

TheSolaris Power 55has been tested extensively over the winter months in order to carry out meticulous and precise fine tuning, right down to the very last details. I don’t want to give too much away, as it will shortly be tested by Barcheand other international magazines, but I can tell you that you will be amazed by its features and sea performance!