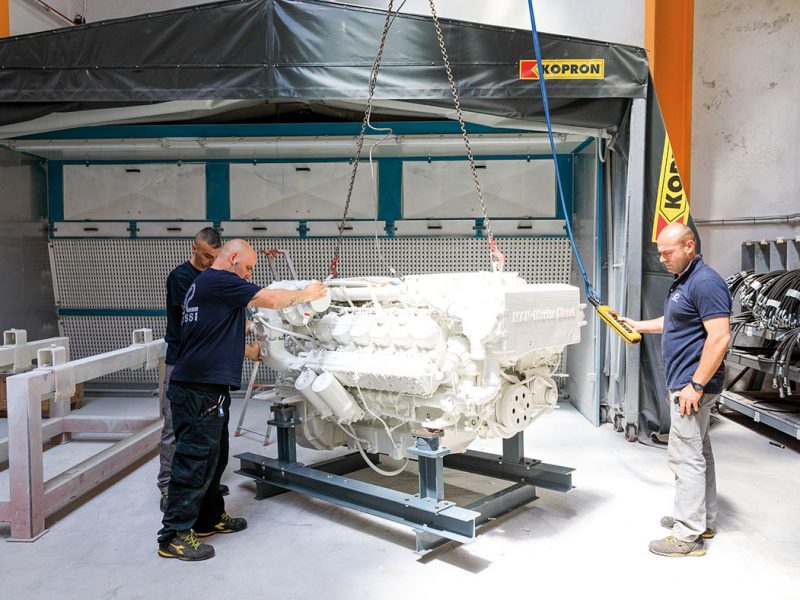 The partnership between the Italian-French firm Nanni Diesel and the German colossus MAN, renowned for its high-speed engines, has twenty-nine years of history behind it. In fact, Nanni has been the official importer for MAN engines in France and across Africa since 1988. Customisation, quality and innovation have enabled them to win over considerable portions of the market, becoming established as one of the world’s biggest inboard diesel engine manufacturers.

Nanni has always sought to surround itself with prestigious international partners in the industrial and car mechanics sector. The firm still pursues the same development strategy today and has signed a commercial agreement with Genoa-based Ranieri Tonissi, a long-standing distributor of MAN engines in Italy.

Gregorio Passani, operations director at Nanni, has this to say about the company’s latest move: «Our commercial partnership with Ranieri Tonissi formally began in 2015, with operations getting underway in 2017, but the synergy between the two firms started back in the 1990s. Since then we have worked together towards the development of MAN engines – us here in France and them in Italy – in both the pleasure boating and professional market. We needed a solid partner able to represent us in Italy in the light of recent innovations in the power range. We felt that Ranieri Tonissi was the best solution to our commercial requirements».

We have observed the course taken by the French firm step by step and have seen how, over recent years, it has taken a gamble on its future by investing its resources in research and development. This has led to a range of engines spanning powers from 10 to 1900 HP in perfect progression. The Silver Series, from 300 to 800 HP, created as a result of its recent agreement with the US firm John Deere, has been conceived as a liaison between the Kubota and Toyota range (that have always represented Nanni’s core business) and the higher powered MAN engines. «The marinisation of three JD engines – the 6.8, 9.0 and 13 l – has enabled us to bridge what would have otherwise have been a small power gap in our range. I’m not afraid to state that Nanni’s extensive offer is now one of the most competitive on the market», says Gregorio Passani with great satisfaction.

Hence the agreement with Ranieri Tonissi, whose history goes back a long way. Its founder, who lent his name to the company, started up the business in Genoa in 1886 as an importer of industrial machinery. It has belonged to the Airoldi family for three generations. Thanks to their close partnership with the German MAN group, they extended its field of activity to the marine sector. Today, Ranieri Tonissi is the sole Italian importer of marine engines produced by the MAN plants in Nuremberg and boasts more than thirty service centres dotted around the Italian coast.

We met Alessandro Airoldi, the company’s managing director, in Genoa: «The agreement with Nanni allows us to present ourselves to the market with the most extensive range offered by a single supplier, both in the field of pleasure boating and in the field of commercial applications, with everything this entails in terms of image and coverage». The Genoa-based firm has catered exclusively to the top end of the market for more than sixty years. In fact, MAN supplies 12-litre engines starting from 400 hp. Thanks to Nanni’s range of engines, Ranieri Tonissi will be able to cater to medium-power boat builders, from classic Italian gozzi to sailing boats and yachts. Nanni is set to earn itself a leading position on the pleasure boating and professional market.

To this regard, Alessandro Airoldi comments: «The agreement with Nanni is intended to develop synergies with our company for the purpose of promoting its engines to Italian boat builders, giving it the levels of visibility and coverage that it deserves». There is no doubt that this is a strategic agreement that has inspired an innovative proposal designed to prevent an overlap between the Nanni range and the MAN range, which are perfectly balanced. The service certainly represents the added value of the new partnership, regarding which Passani tells us: «The real strength of the recently signed agreement is certainly the advantage we can offer in terms of service, meaning that boat builders who decide to install Nanni in their smaller range and MAN in their higher range will only have to deal with a single supplier: Ranieri Tonissi in Italy and Nanni Diesel in France».