Moreno Cedroni, ahead of your time 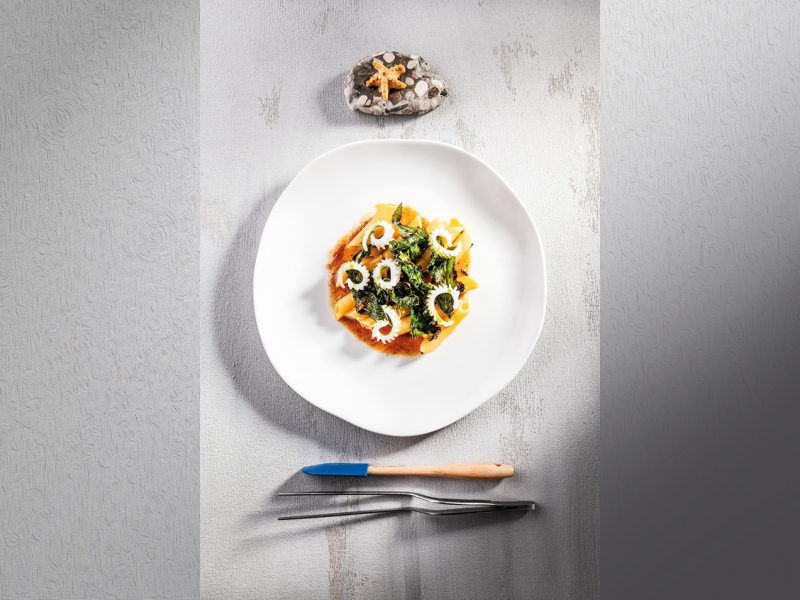 Moreno Cedroni is a double-Michelin-starred chef who has instilled italian cooking with an avant-garde spirit. He is considered one of Italy’s most innovative chefs and is a true enfant terrible in the world of international cuisine

by Francesca Portoghese – photo by Brambilla-Serrani

Moreno Cedroni is to cooking what Albert Einstein was to physics. A bit of a stretch perhaps? Not at all. Nothing is off-limits when describing this innovator and inventor, who has shattered the traditional boundaries of Italian cuisine and got us accustomed to unexpected changes in direction. Leaving aside all his awards, Moreno Cedroni has brought eclecticism to the international food scene, always seeking to surprise and proving that a dish can – and should – tell a story. The chef from the Marche region of Italy has turned the rules of the game upside-down, reinventing cuisine daily without abandoning his strong principles. Although tied to tradition, he is constantly seeking out and conquering unexplored horizons, amazing dinners, and transporting the senses to new levels of excitement. 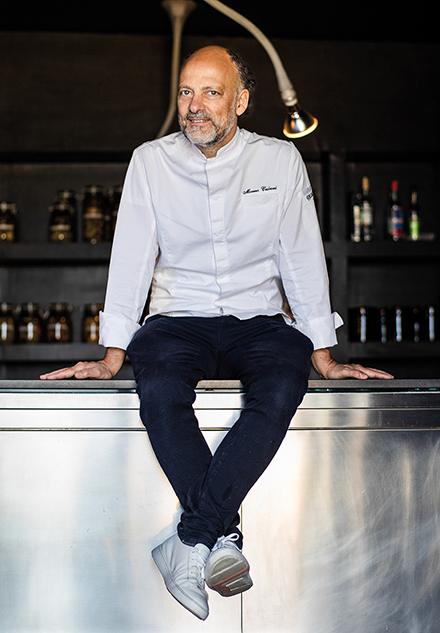 THE RESTAURANTS
In 1984 Moreno Cedroni opened La Madonnina del Pescatore, a restaurant set in beautiful surroundings in the Marche region.
In 2003 he launched his first fish delicatessen, Anikò, which means ‘everything’ in the Senigallia dialect. This kiosk sells high-quality street food, perfectly redefining haute couture in a prêt-à-manger setting.
The Clandestino Susci Bar is found in the bay of Portonovo, with its white cliffs, turquoise water and adjacent hills covered with lavender and broom. It is the star attraction of Conero Regional Natural Park, an unspoilt oasis where guests find themselves surrounded by Mediterranean scrub and captivating aromas.

Moreno, what story does your cooking tell? My cooking describes the world. The journey begins with my personal history, from the Marche region where I grew up and my life experience, and continues with a ‘crossover’ spirit in everything I do. I like to adopt the flavors and fashions of the places that have touched my life, and I expect to do the same with those I have not yet visited. I believe strongly that there is something ancestral in everything we create in the kitchen; our DNA recalls and supports the things it knows, but equally, it is always ready to embrace new traditions.

Your meticulous attitude has not prevented your creativity from exploding and becoming the hallmark of your work. Does this stem from your talent? Practice and precision are essential in all jobs, but discipline, research, and a methodical approach are particularly crucial in our sector. In my case, it was a combination of the traditions I carry with me and my attention to detail that enabled me to make discoveries. 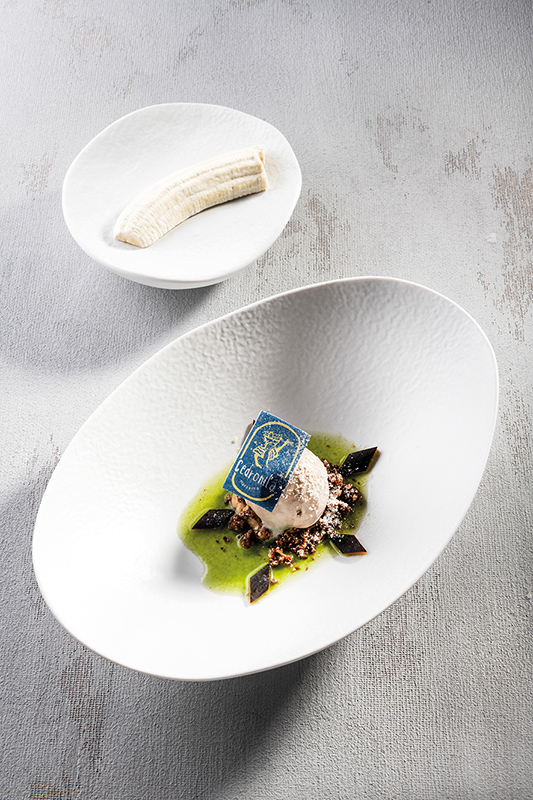 Your restaurants look out across the sea. To what extent does this panorama inspire you when creating new dishes or deciding to alter existing ones? The sea is my muse. We are mostly made of water, and I strongly believe that the attractive force of the sea, which I see in front of me every day, guides my choices. Take, for example, my decision to create a sea vegetable garden at my restaurant La Madonnina del Pescatore, which gives it a new dimension and instills the dishes with new meaning, making the menu much more contemporary. I can see the sea from my home and my restaurants. I watch it while I am cooking, and I feel like the bond I share with it is getting stronger all the time.

Your book Cedroni. Il pensiero creativo che ha cambiato la cucina italiana [Cedroni: the creative thinking that changed Italian cuisine] describes how, during your almost 40-year career, you have moved from combining creativity and tradition to research and development. What does this mean? I think a link with scientific research into ingredients and the overall experience is essential for any chef. Today, technology allows us, chefs of the present, to create the future, using all of every product, reducing waste, achieving the best possible nutrition, and seeking and obtaining new knowledge and fresh interpretations. 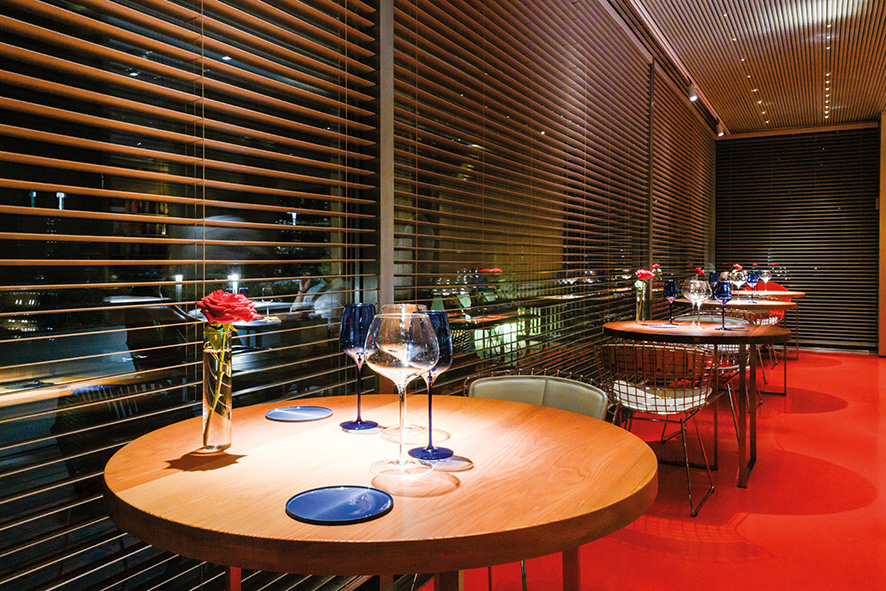 In 2012 The Wall Street Journal included La Madonnina del Pescatore in its list of the top ten fish restaurants in Europe.

Do the journeys that add so much life and narrative to your cooking also have a private dimension, or are you always looking for new things to inspire you? New things always stimulate creativity, opening one up to fresh ideas. But travel to me also means letting go of everything, taking on the traditions and customs of a place, and sampling all the foods I have never tried before. 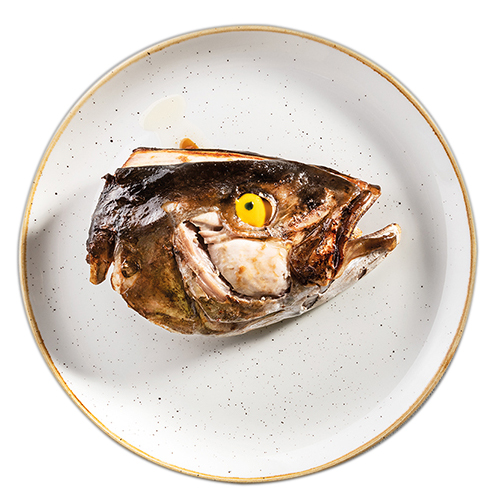 Where did the idea to create a sea vegetable garden come from? The idea for the garden came from my memories of my mum and grandma collecting herbs here in Senigallia on the Adriatic coast, on this beach where I lived as a child. I grew up opposite the rushes and dunes, tasting and learning to recognise all the herbs they cooked. It was an incredibly beautiful marine ecosystem, and I have now decided to recreate that beauty.

Sustainability is at the heart of your work. Can you tell me more about the Marecircolare project? Plastic pollution has become one of the most urgent environmental issues we have to tackle, partly because it is serious – plastic production has a major impact on climate change – and partly because it is something we have ignored for too long. In recent decades, the production and use of plastic items have grown exponentially, leading to the pollution we now see both on dry land and in the sea. Once plastics reach the ocean, sunlight causes them to break down into microparticles that inevitably get into the marine food chain, and ultimately the dishes we serve. That is why I wanted to support a campaign to raise awareness about the issue and threw my weight behind Marecircolare, a project that aims to clean up the sea along with parts of the Marche coast popular with tourists. The aim is to improve the health of the sea, which is vital to protect both fish stocks and the food chain. 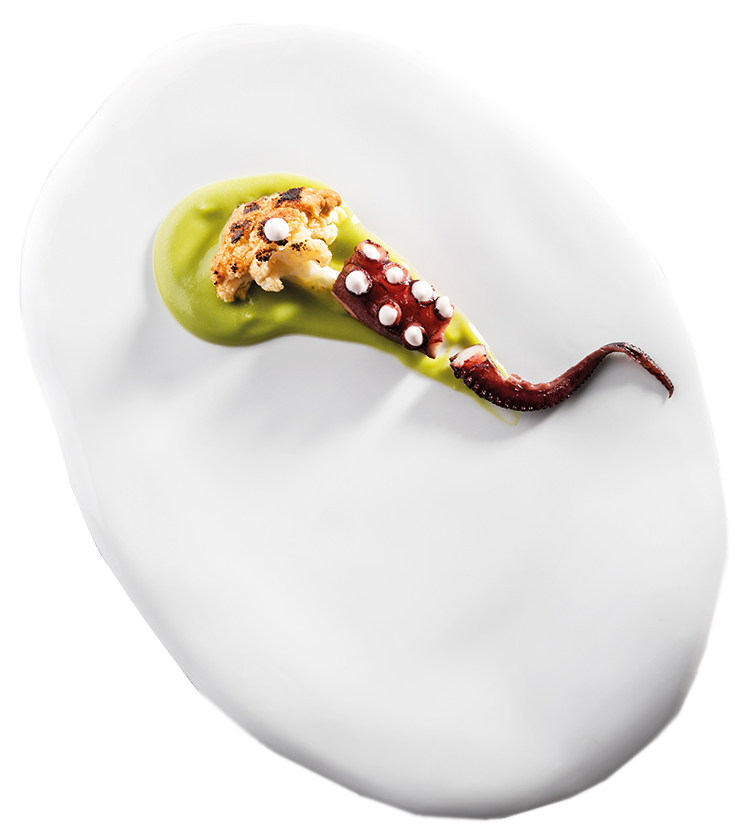 IN FEBRUARY 2018, MORENO CEDRONI, WHO IS WIDELY CONSIDERED THE INVENTOR OF ITALIAN-STYLE SUSHI, WAS NAMED BY THE NORWEGIAN SEAFOOD COUNCIL AS NORWAY’S STOCKFISH AMBASSADOR DUE TO HIS EXTRAORDINARY KNOWLEDGE OF THE FISH AND HIS INNOVATIVE NEW INTERPRETATION OF IT AS AN INGREDIENT.

Which of the products from your Officina Cedroni range would you recommend taking on board a boat? All the delicious, extravagant, and ready-to-eat fish-based products, which come in tins that act as a lovely container, just as beautiful as a plate. And the sauces, so you can rustle up a pasta dish in next to no time. I’d also suggest my alcohol-free drinks and – why not – my three sweet-and-sour sauces that can be paired with fish, meat, and vegetables.

You are the author of eight books: what did you want to achieve with your writing? I wanted to describe myself and my thinking at a particular moment in my life. I am my most demanding reader, and I couldn’t entrust the task of writing to anyone else and risk reading made-up or forced stories: it would have been a great disappointment. My books also include various recipes which, as well as explaining my philosophy, always remaining faithful to my identity, also provide instructions on how to identify and choose the tools you need to create a dish.

CEDRONI HAS SUPPORTED THE AIRC FOUNDATION FOR CANCER RESEARCH SINCE 2003. HE IS PARTICULARLY INVOLVED WITH AN INITIATIVE ENTITLED LE ARANCE DELLA SALUTE [ORANGES OF HEALTH], CREATING DELICIOUS AND HEALTHY RECIPES AND WORKING WITH RESEARCHERS TO EDUCATE PEOPLE ON THE IMPORTANCE OF HEALTHY EATING IN CANCER PREVENTION. 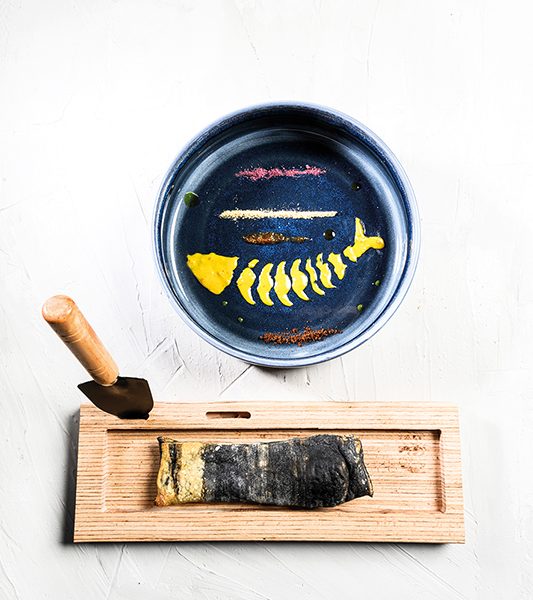 Which ingredient do you most enjoy cooking? Definitely fish: I find it both enjoyable and stimulating.