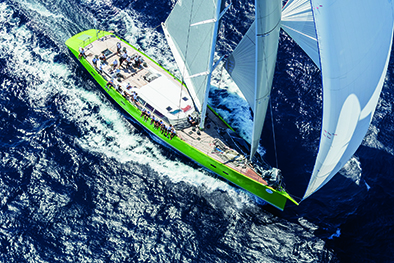 The latest races in Costa Smaralda which is preparing to celebrate the 50th anniversary of its Yacht Club IN SEPTEMBER THE WATERS OF PORTO...

IN SEPTEMBER THE WATERS OF PORTO CERVO DON’T JUST LOOK GREEN because of the magical reflections of the Sardinian sea floor, but also because of the colours of the Rolex watch firm which has linked its name to the Yacht Club Costa Smeralda for maxi yacht races.

From 4th to 9th September the fleet of the Maxi Yacht Rolex Cup & Rolex Maxi 72 World Championship will return with the stars of international yachting, who last year dominated the Sardinian waters. The 29-metre Windfall, with Michael Cotter and Andy Beadsworth, who won the trophy last year in the maxi category, and the 72-footer Bella Mente, led to victory by the tactician Terry Hutchinson, will have to defend their titles. It is a very open race that also awaits Magic Carpet Cubed, Sir Lindsay Owen-Jones’ Wally 100 which comes fresh from winning the Giraglia race in June.

However, the end of the YCCS sailing season also celebrates another “old” collaboration, that with the Nautor’s Swan yard. This edition of the Rolex Swan Cup (11th-18th September) marks the 50th anniversary of the Swan yard’s foundation which, with its designers Sparkman & Stephens and German Frers, has written chapters in the history of international sailing. Under the guidance of Leonardo Ferragamo, Nautor Yacht has joined the technological age with the new Boatbuilding Technology Centre in Jakobstad, in the Ostrobothnia region of Finland. Also coming to Porto Cervo, and for the second time, is the Sailing Champions League (SCL 22nd-25th September) – the international event which started in Hamburg and which features teams from all over Europe.

The season which will end with these international fixtures will have been intense. It began at its Caribbean base in Virgin Gorda and looks forward to 2017 when the prestigious club will celebrate its first, exciting, 50 years – but Princess Zahra Aga Khan and Commodore Riccardo Bonadeo are not giving anything away about the programme. The Yacht Club Costa Smeralda has experienced an adrenaline-filled season, with the starts of a fleet of super yachts that are only separated from the buoys by a matter of millimetres.

It is hard work for the people that work at the regatta office managed by the Sporting Director, Edoardo Recchi and whose standards are so well proven that it has become one of the most prestigious clubs in the world. This year the Jury Boat and the inflatables will have Swarovski’s Optik Polaris series binoculars on board, which have been designed for contact with water, even in extreme conditions.

«The technical agreement with the Yacht Club Costa Smeralda–, Franco Cernigliaro, General Director at Swarovski Optik Italia, emphasises – is an important test to try out this kind of binoculars, which focus on technological innovation but are extremely light and are completely protected from the water and accidental knocks. The other strong point is a handle that allows an effective grip to be maintained both when gloves are worn and with bare hands, when there is inevitably spray in rough seas. We are also happy, – Cernigliaro continues – to have started the first season with our Swarovski Optik sales point in Piazza Azzurra with Enrico Curreli’s Nautica La Marina, which will be a point of reference for this area».