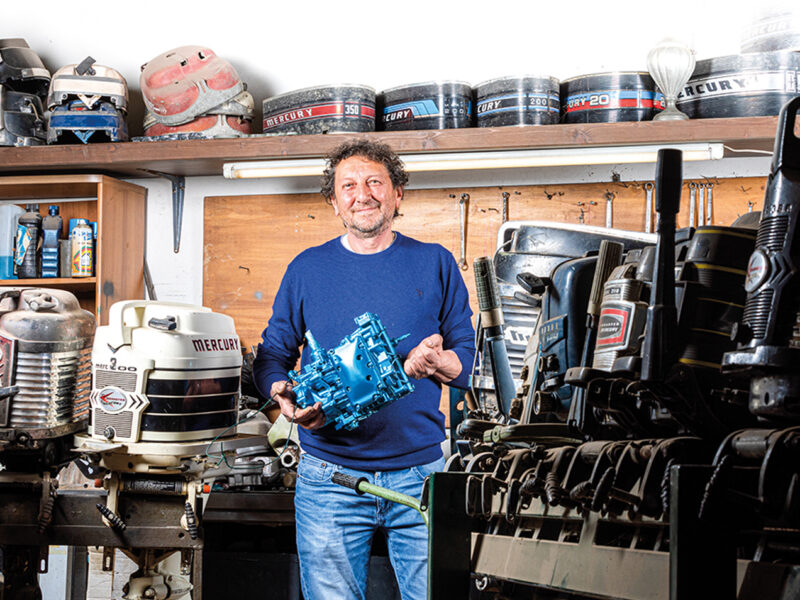 Recovering, restoring and returning to working condition abandoned engines which were to be scrapped. The passion for old outboards is also a chance to tell the story of boating for pleasure

At the beginning of the 1970s Maurizio was a child like any other: he liked playing football with his friends, and he really liked motorbikes. What made him stand out from a lot of others were his surroundings. Beneath his kitchen window water ran through a canal. Maurizio lived in Venice, in the Dorsoduro quarter to be precise, together with his grandfather (from Siena) and his mother, who was from Naples. He could not only see water from his window, but he could also access it through it, climbing down to a small boat. The first boat that he helmed, aged ten, was driven by a five horsepower Ducati. He used it to get around, crossing the Grand Canal, and occasionally going to the other side of the Giudecca with friends after school, and fishing for mullet. It is said that the Venetians will use anything to get on the water. You do not need a boat that is especially attractive and well maintained. You just need a shell that floats, then if you fit an engine onto it, you can start to travel across the lagoon. 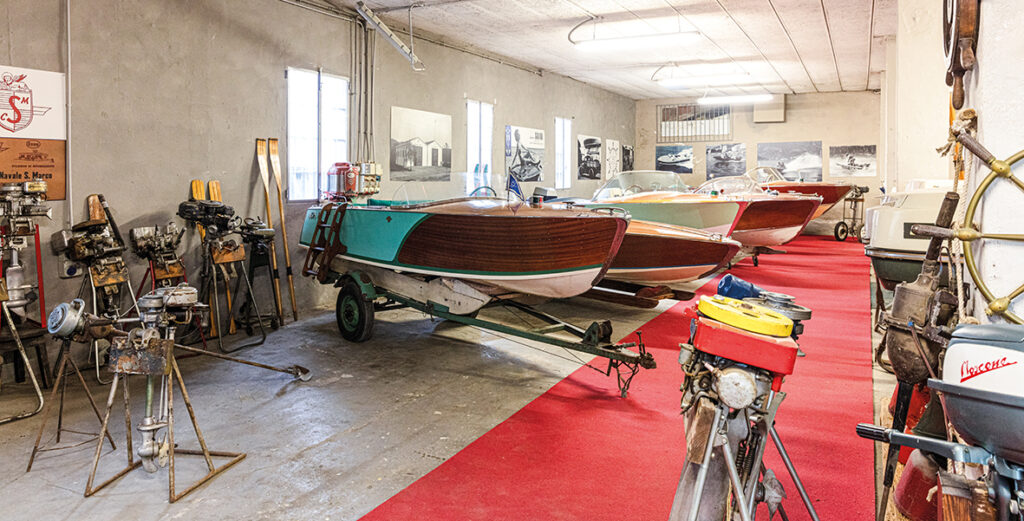 Maurizio has a passion for engines, especially outboards. And perhaps that passion has a lot to do with where he grew up. And not just because in Venice, the only way of getting around – apart from your legs – is on a boat, but also because it is the city in the world that changes least. Luckily nobody would envisage knocking down one of the palaces that look onto the canals and building a new one. 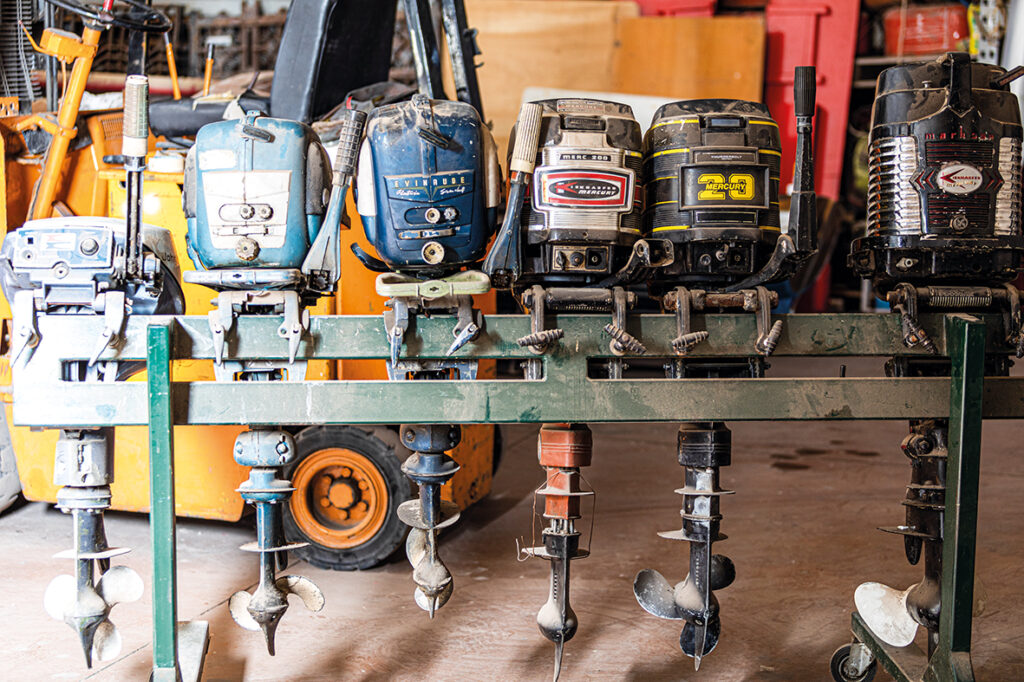 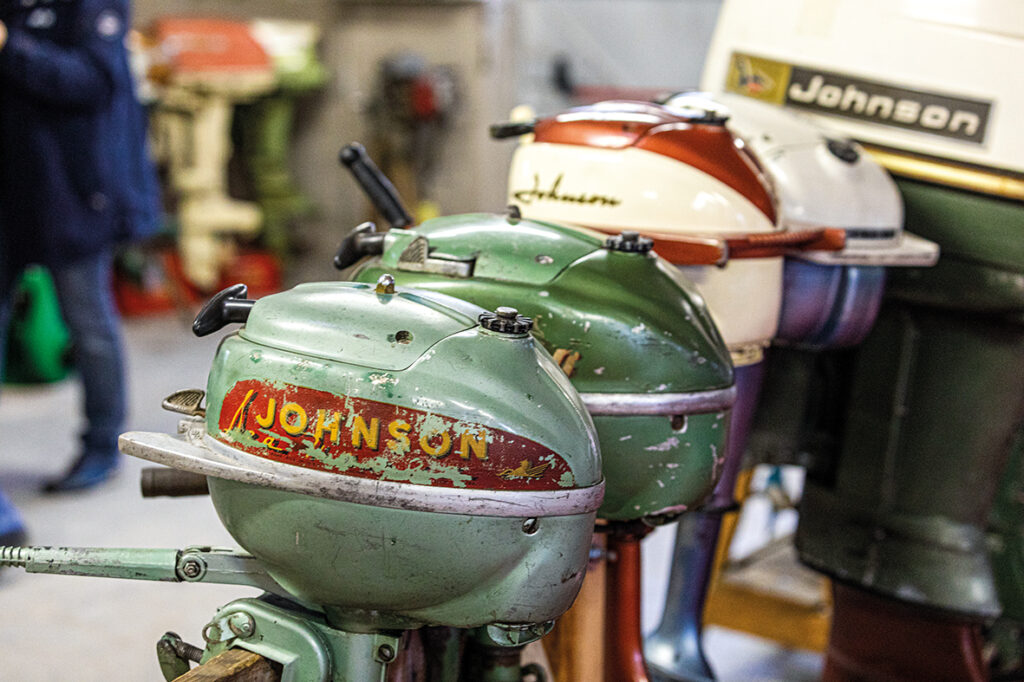 IN THE 1950S AND 60S THERE WERE A LARGE NUMBER OF ITALIAN COMPANIES THAT PRODUCED SMALL OUTBOARDS: MAC, CRISTIANI, FRANCHI AND THEN THE BETTER-KNOWN DUCATI, PIAGGIO, CARNITI AND SELVA.

Conservation, restoration, and leaving everything unchanged over time is an imperative that the Venetians are very much aware of, and they enjoy the resulting beauty on a daily basis. If we put these factors together, what has emerged from Maurizio’s passion is the recovery and restoration of old engines. And not just that: sometimes he also works on boats. It is a passion, not a job. He does this in his free time, but he does it with dedication and commitment and has been doing so for a number of years. The first thing is to find the old piece. It is mainly from word of mouth from friends that he can do that.

The museum that Saletti has set up houses dozens of restored models. The oldest is a Caille from 1916, and the most recent are from the 1970s. 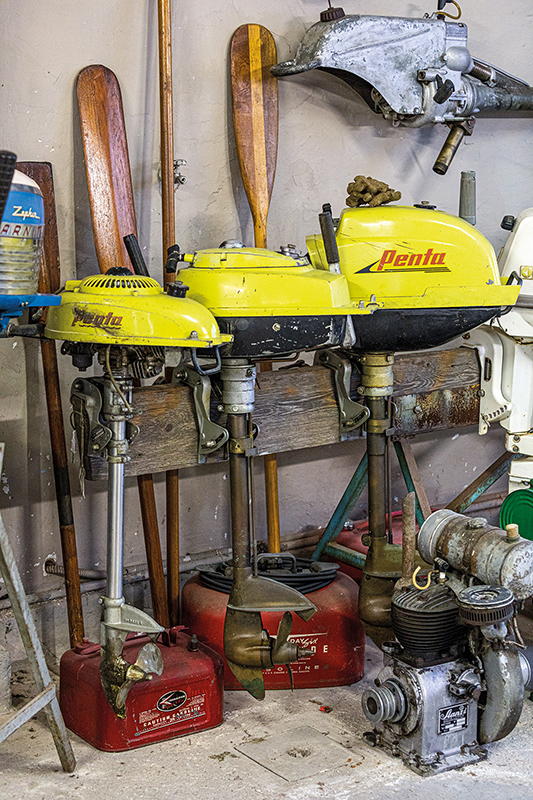 Maurizio then recovers the abandoned engines, which would otherwise have ended up in the dump. «I am a purist, I don’t change anything. I don’t use spare parts, not least because they are often very old outboards and the spares just don’t exist. It might seem paradoxical, but getting an engine that has not been used for a long time back on track isn’t really so impossible». The first thing he does, once he has taken an engine into his workshop, is to check the compression. «If it needs opening, then I do so, and I take everything apart and also work on the bore and pistons. But if the compression is good, and the motor turns over, then I don’t even open it». Then he starts cleaning it, and checking the carburettor, and working on the electrical parts, which normally use a dynamo. That is the most delicate part, because they can be rusty, but luckily these old engines have never heard of electronics. There are a lot of mechanical parts, but they are actually easier to restore. 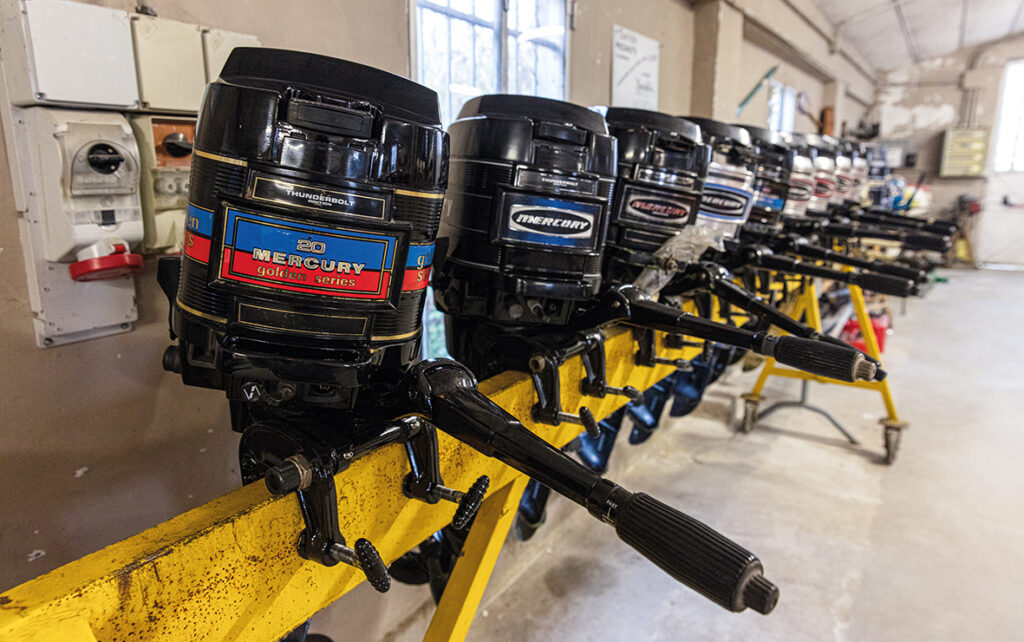 How was the outboard invented?

As is often the case with inventions that are set to change the course of events, there is not just one version of this history. There are at least two inventors who can claim to have invented the outboard. In February 1905 Cameron Waterman, a law student from Detroit, took apart a motorbike engine and attached a propeller to it, before then adding a bar and a petrol tank, and used it on the Detroit River. Despite the fact that the river was full of blocks of ice, one of which knocked the transmission chain off, the trial was such a success that in 1906 he started selling the engines, including through the Caille brothers. In 1922 the company was taken over by the newly-formed Johnson Motor Company. Waterman did not ever get a real patent because there was already one, which is to say that at the end of the nineteenth century an application had been made for an invention that included a small boiler with a propeller attached to the stern of a boat. And that, according to Cameron Waterman, was why his invention was not protected by the patent that he had applied for. The second version of the story of the birth of the outboard is perhaps more romantic and takes us to Ole Evinrude. It was more or less at the same time, to be specific the hot summer of 1906. Ole came from a family of Norwegian immigrants who lived on a farm close to Lake Ripley in Wisconsin, and he had a girlfriend called Bess. There was an ice cream parlour on the other side of the lake, but every time that Ole bought Bess a cone and took it to her in his rowing boat, it had melted by the time he arrived. And that was how he got the idea of adding an engine to the transom of the small boat to go quicker. Three years later, in 1909, he started to market the first Evinrude outboards.

«I get hold of the spare parts, in that I take apart everything that might be useful, and often at least one working engine emerges from three old ones».That is very much a green approach, which could represent an example of ecological transition, and which definitely gives value to objects that are seen as junk.

Once it has passed through Maurizio Saletti’s patient hands, this junk acquires a new lease on life. The restoration that he does is not limited to just a superficial treatment to put it on display, but he actually makes the engines work again, and ready to use on a boat. What happens to them once they are restored, and running again? «A few I’ve given to people who use them on lakes, or on the Venetian lagoon, but most of them I have put in a museum».

MAURIZIO IS BOTH PASSIONATE AND SELF-TAUGHT. HE GOES AROUND BOATYARDS AND HE LIKES TO LISTEN TO THE ADVICE OF PEOPLE WHO HAVE SPENT THEIR LIVES REPAIRING ENGINES. 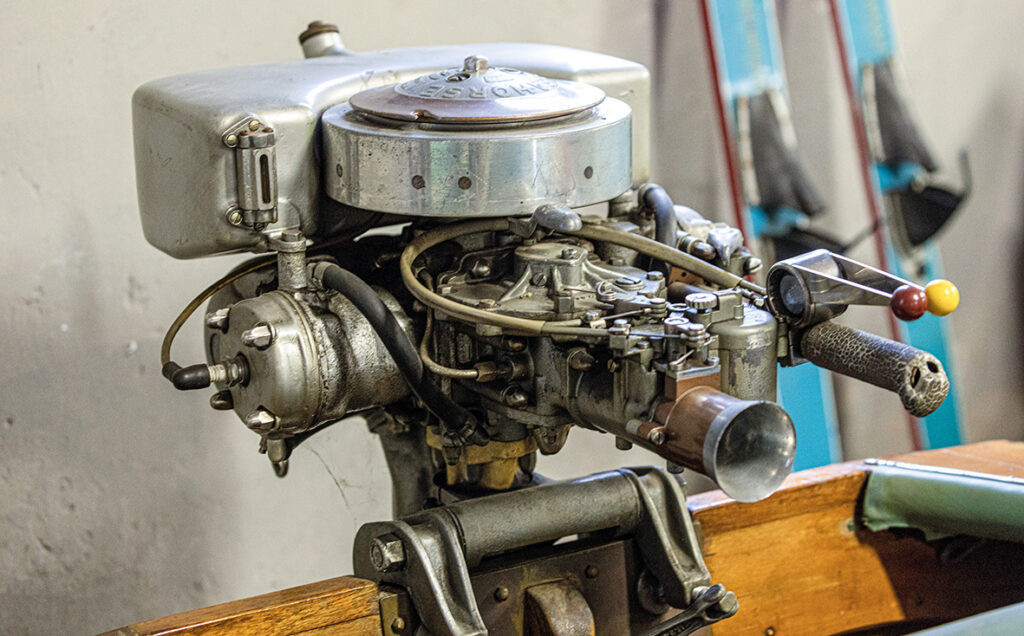 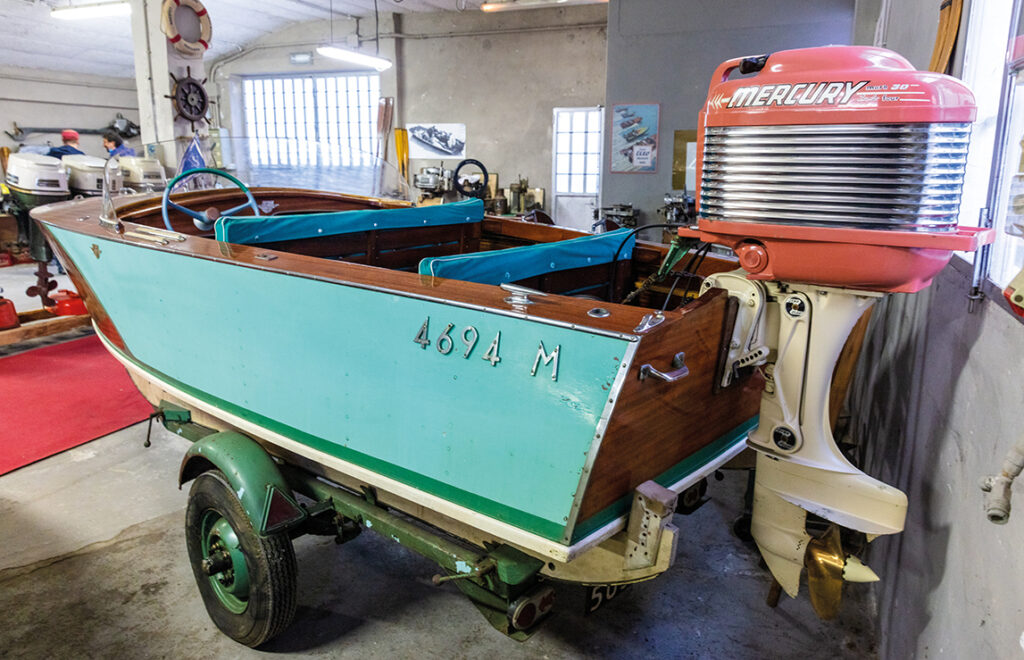 The museum is in a small warehouse a few kilometres away, which he took me to. It’s not yet open to the public, and for the moment there is just one area, which is very well laid out, which Maurizio shows to friends and acquaintances. There are dozens of models mounted on display, most of which were from brands I had never heard of. The oldest of all is a Caille from 1916, more or less the same era as Evinrude, and thus one of the very first outboards. Caille is also American and has a variable pitch propeller that can deliver as many as five different speeds. 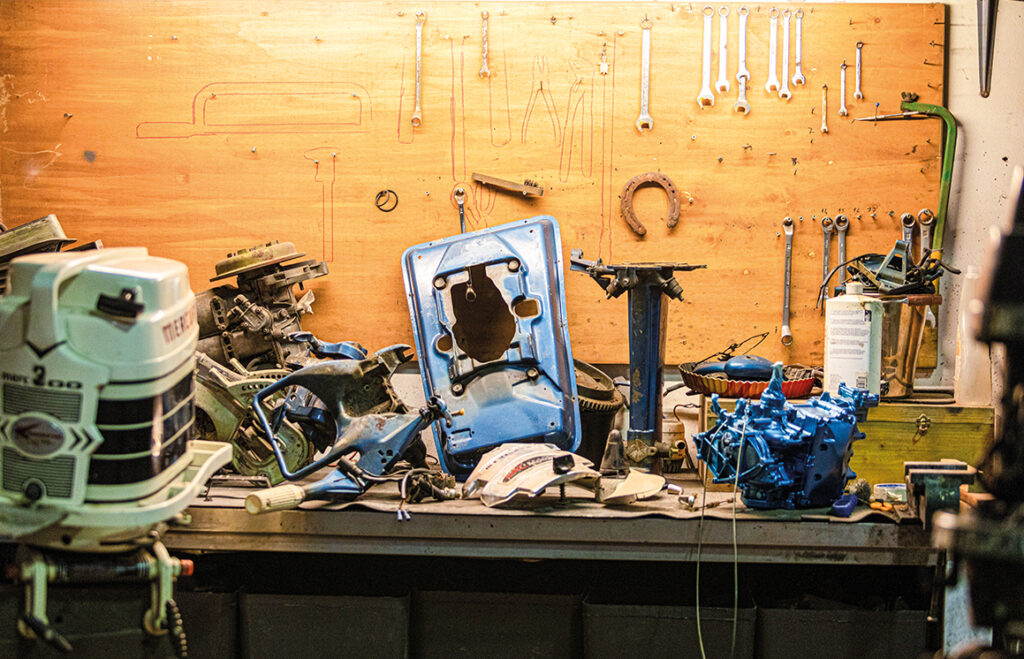 Amongst the American engines there are a lot of brands that have become established over time: Evinrude, Johnson and Mercury, with nearly all of them from the 1950s. Maurizio has also recovered some Italian ones, like Carniti and Selva and there is even an example of Cucciolo, a five-horsepower Ducati of the same type that Maurizio used as a boy. He told me the story of other models like Franchi or Cristiani, an engine invented by an engineer from Pavia. Most of the motors go back to the post-war period. Like Helios, which was a 1.5 hp outboard that took inspiration from a similar Johnson model, but was made by the engineer Vassena. Helios came about because until 1945 there was an embargo on American products, and so Vassena solved the issue by remaking the engine. «I think he improved it, because a Helios worked better than a Johnson». Many outboards start life in different sectors. In recent times, for example, the two-horsepower Honda was derived from one used in a lawn mower. Many in small outboards were used in gardening before finding the water. The same thing happened with MAC from Castelfranco Veneto, who were the first to use an engine with rotating pistons that had first been used in a strimmer. 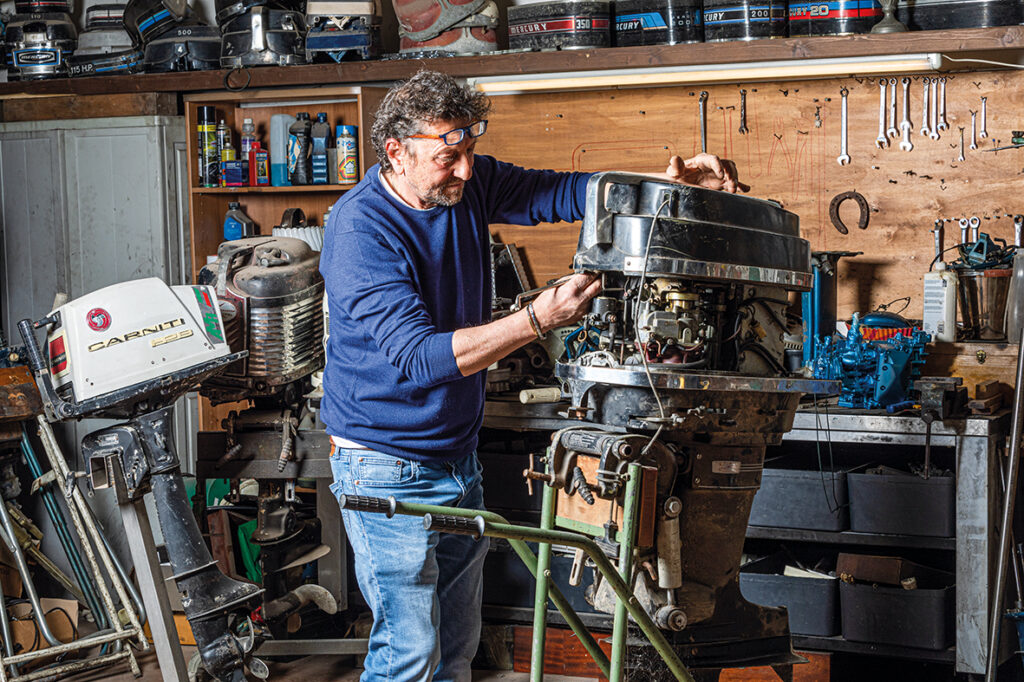 MAURIZIO SALETTI IS WORKING TO RESTORE THE OLDEST BOAT
THAT HE HAS HANDLED, WHICH GOES BACK TO 1910. IT IS WOODEN HULLED, AND HAS AN ONBOARD ENGINE.

And then there are the engines made by Piaggio, who stopped production in 1966 because of the Florence flood, which saw the factory inundated when the Arno broke its banks, and the company decided it was no longer profitable to continue. Visiting the outboard engine museum set up by Maurizio Saletti is like going through the story of Italian industrialisation. There are numerous companies, small and medium sized, with plenty of good ideas, the ability to adapt to circumstances, and impressive entrepreneurial spirit. It is a precious memory that should be guarded, because it is also our history. That is something that feeds the passion that Maurizio deploys in restoration. He is self-taught, and is very dextrous. What he has learnt comes, above all, from listening to the people around the Venice lagoon who have handled the outboards when repairing them. The hope is that this small museum will soon be able to open to the public because, as people say, without memory there is no future.