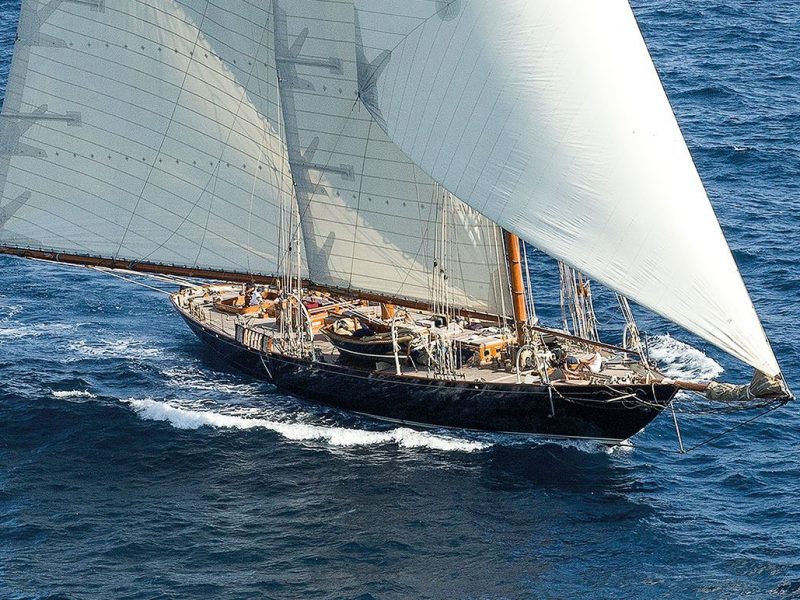 Mariette is one of the few schooners designed by Nathanael G. Herreshoff, one of the greatest naval architects of all time.  The boat has recently returned to the sea after yet another refit

by Bruno Cianci – photo by Pendennis

Nathanael G. Herreshoff, 1848-1938, one of the greatest ever designers in sailing history and undoubtedly the most successful, did not get on with schooners, considering them too tricky to manoeuvre due to the wind resistance caused by their rigging. It is no surprise, then, that of the 2,450 boats that left his shipyard, only around 15 of this type of craft survive today.

Of these, just five are seaworthy, and one of these is Mariette. Completed on 22 October 1915, she was built in just seven months in the shipyards of the legendary ‘Wizard of Bristol’, a nickname that refers to the small town on Rhode Island where the designer was born and worked, running, with his blind brother John Brown, the shipyard they founded together in 1878. 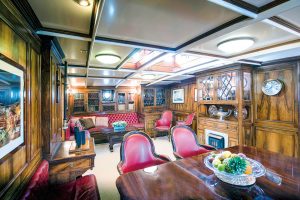 They decided to make the Mariette’s hull out of steel, a material used for several of Herreshoff’s America’s Cup-winning boats: Vigilant, Defender, Columbia andReliance, followed later by Resolutein 1920. At the insistence of the client, the schooner was given a gaff rig, with a lower foremast than main-mast.

The first owner was the textile entrepreneur Jacob Brown, who spent the astronomical sum of $75,000 on Mariette, enough to buy over 100 cars at that time. On 23 May 1916, Mariette, hull 772, was delivered to Brown and his wife, the ship’s sponsor.

A centenarian that is still going strong
In 1949, under a new owner, the first changes were made to Nathanael G. Herreshoff’s sail plan for Mariette, so the boat could be sailed in the Caribbean with a reduced crew. However, the most invasive work took place between 1979 and 1982, when the schooner was rigged by the publisher Alberto Rizzoli, having bought the boat from fellow Italian Carlo Monzino. 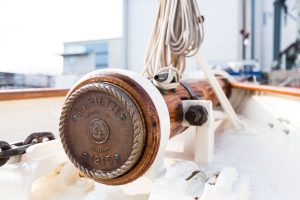 A desire to restore the boat to its original form led legendary skipper Erik Pascoli to the archives of the Massachusetts Institute of Technology (MIT), where the designs produced by the ‘Wizard of Bristol’(who studied engineering at the university) are kept. The refit was carried out by the Beconcini shipyards in La Spezia, and restored certain lost details, as well as the original name, although various ‘amendments’ had to be made to accommodate certain needs, such as retaining simplified rigging to reduce crew costs.

Beconcini was also involved in the work on the schooner in 1995, when it was rigged by Tom Perkins. The IT magnate’s strange attraction to complex rigging, as seen, for example, in his famous Maltese Falcon, led him to restore the Mariette’s original sail plan, with the return of the large gaff sails that had been removed half a century earlier. 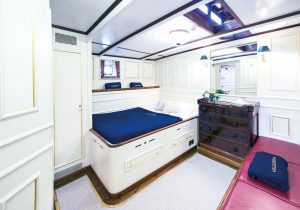 Life in the yard
The most recent restoration took place very recently, between autumn 2017 and spring 2018. This time the work was carried out in the Pendennis shipyard in Falmouth, Cornwall, where the boat has been based since 2010. The work, assisted by the schooner’s salaried crew, involved many different parts of the boat, and especially the deck, which was renovated structurally, by installing new steel beams, and aesthetically, with the addition of two new layers of marine plywood and 150 m² of 20 mm-thick teak planks.

This delicate operation involved removing deck houses and sky lights, which were completely repainted, as were the masts, bowsprit, boom and gaffs. Some of the metal plating on the hull was also replaced, and the hull was repainted in the striking Flag Blue livery, adopted relatively recently, in sharp contrast to the original white hull.

Below deck some changes were made that were less visible, but equally important to maintain the boat’s condition. The engine room was given extra access and a more efficient drainage system, while the galleys, the owner’s cabin and other parts of the crew mess were also renovated. All visible steel elements below deck were repainted, and various surface materials were replaced, as well as the carpets and rugs in the cabins.

A new, improved chimney was installed for the on-board stove, and new fuel and water tanks were put in, with sections of the plumbing and electrical systems replaced. The electrical work focused in particular on installing new wiring to prevent the short-circuits that often cause fires on boats with wooden interiors.

Thanks to the hard work of the schooner’s latest owner, who bought it in 2005 from Tom Perkins, just a year before the magnate’s death, Mariette is a star player in the period boat regatta circuit, both in the Caribbean and in the Mediterranean.

In 2015, 100 years on from the boat’s launch, it chalked up another achievement, beating a dozen other craft for victory its category of the Transatlantic Regatta– further proof that the ‘Wizard of Bristol’really knew what he was doing. 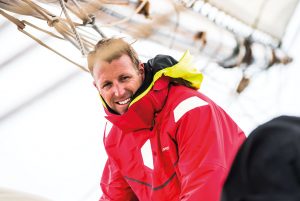 The skipper
Nobody knows Mariette better than Charlie Wroe. Born in 1975 in Devon, Charlie has skippered the boat since 2005, but his first experience of Mariette came in 1996-1999, when he worked onboard as a sailor. He has travelled 175,000 miles on the schooner, equivalent to sailing eight times round the equator.

“Marietteis a fantastic boat”, Wroe said. “She can hold her own in regattas and is comfortable on sea crossings thanks to her long keel. When fully loaded she can travel up to 260 miles a day, at an average speed of 11 knots. The minimum crew is seven, but out at sea you need ten; the demands of regattas, meanwhile, can require up to 24 people”.