Laura Sessa, the color first of all 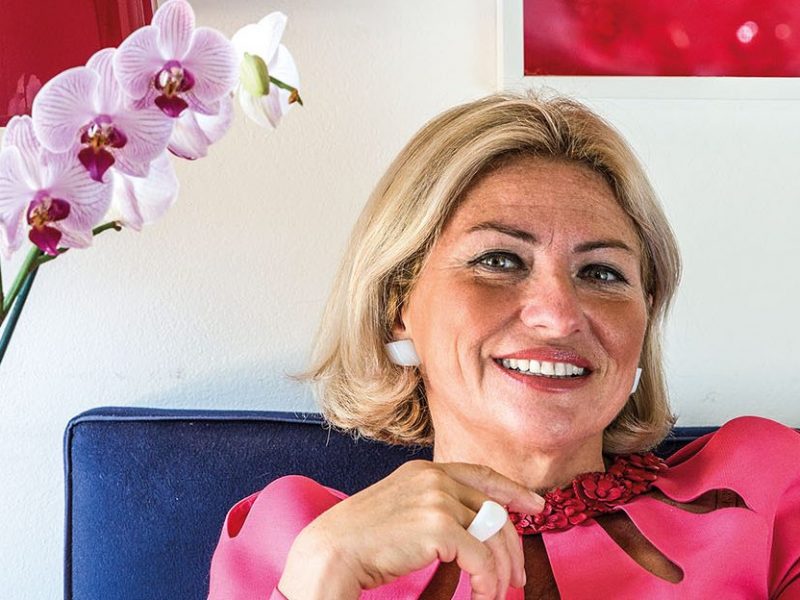 One of Laura Sessa ’s standout qualities is the sensitivity with which she grasps the subtlest nuances of boat owners’ wishes.  She loves colour, and her work inspires a feeling  of wellbeing and happiness her clients love

In Poli, a town 25 miles from Rome, the calm silence of a rainy winter holds sway. The olive trees are still, the land is sodden and the branches are bare, except for a few sad-looking oak leaves. The red brick of Casalvecchio stands out against the angry sky, the large, circular windows providing a glimpse of the interior, like giant portholes looking out to sea.

We’re at the headquarters of Laura Sessa, one of the most prestigious yacht interior designers in the world, just a few hundred yards from the sixteenth-century Villa Catena, which during the age of the Grand Tour was painted by landscape painters from across Europe. When we arrive, the architect is in the middle of a conference call with a client. 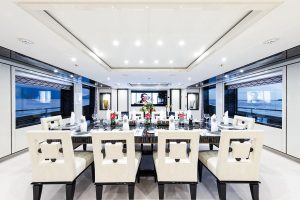 While we wait, her colleagues answer phone calls, exchange information and beaver away on their computers in what feels like a large, warm and welcoming foundry of ideas. A Maremma Sheepdog and Weimaraner wander among the chairs and, every so often, let themselves out into the garden through the wide patio doors. The amply sized work bench and the walls are covered with countless fabric samples, catalogues, portfolios and geometric chocolates from Parisian chocolatier Fabrice Gillotte, in a bedazzling array of colours that reveals relentless dynamism.

«This is where I get my inspiration. We work in a domestic, family-like environment», Laura Sessa says as she joins us in the large room. «I can find peace here after long journeys and time spent away. And I can even see the sea from the top floor». 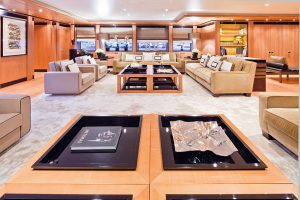 But first we take a step backwards. «My passion for the sea began a long time ago, during my childhood in Athens». But it was purely by chance that she ended up working with boats. Serendipity, you could say. «I had just turned twenty, and I ended up working in France with Alberto Pinto, who taught me an incredible amount. I learned that the most important thing when you design something is to never lose sight of its functionality».

For this reason, Laura Sessa hates cold environments with a clinical, hospital-like atmosphere. «A boat has to be lived in like a home, not like an exhibition of museum pieces. Minimalism is very much in vogue at the moment when it comes to the hues used in a design. But I love colour. Any environment has to be warm, functional and well-balanced». 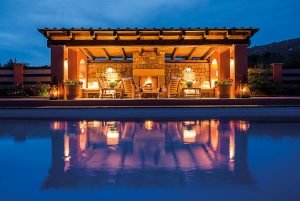 Although Sessa has clear ideas about what she likes, she never imposes her thoughts on boat owners. «We always talk to our clients, and the main aim is to meet the needs of the owners. I don’t think a designer should force their style and rules on anyone. The important thing is to create something harmonious».

And continuity between the interior and exterior is also crucial. «Sometimes the interior designer has to work with a completed design, which makes it very difficult to fit the different elements together. It’s important to encourage dialogue from the very beginning». Unfortunately, however, this doesn’t always happen.

Laura Sessa’s studio designs everything. «We even design the door handles, the wallpaper and the embroidery on the cushions. That’s what were doing now for Lürssen’s Project Fiji, which will be launched in a few months’ time». This 95-metre, fully custom-made boat that can house up to twenty people is the epitome of craftsmanship. Laura Sessa is following the process from beginning to end, from coming up with the design and creating the samples through to the end result.

But the decoration is never an end in itself. «The innovation I am most proud of is devising a system where a functional element can be hiddenbehind a decorative one».

What does that mean in practice? «For example, covering the television with an artwork that can disappear when required. Creating hidden closets within a wall. Or even handles inside the decorative pommels on a handrail». The boats designed by Laura Sessa are full of these wonders. «Perhaps that’s my father’s legacy», she says, smiling. 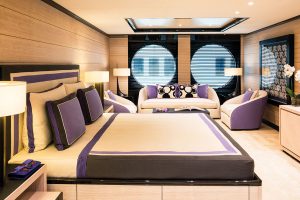 He was no ordinary father, by the way – «he designed the Lambretta in 1958». So what design is Sessa most proud of? «The one that’s yet to come», she says, jokingly. But it turns out she’s serious. You can tell from her desire to experiment and to look to the future.

«Chopi Chopi was undoubtedly a great boat. We were very daring». That was 2013. Since then, the Sessa design studio has put its name to a great many yachts, including a huge number for the Dutch firm Amels. The most recent is Eji, a 55-metre craft launched in 2018. But what is she working on now? «The M/Y 135 for CRN, a new 79-metre superyacht, which will be launched in March. In the meantime we’re working on the Sanlorenzo SL 96, which will be unveiled in Düsseldorf next year». By the time we leave, it’s already dark outside. But the foundry of ideas in Casalvecchio is still going strong.
At Sessa, the work never stops.

(Laura Sessa, the color first of all – Barchemagazine.com – Aprile 2019)