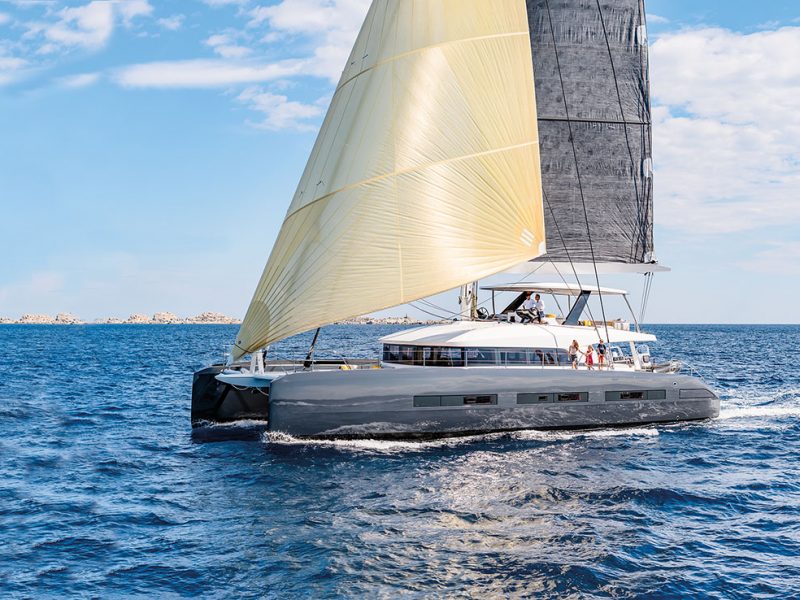 The Lagoon flagship, the new Seventy7,  is just under 24 metres long and 11 metres wide. VPLP design was behind the naval architecture, Nauta Design developed the interiors andPatrick le Quémentdesigned the deck

TO GET AN IDEA OF THE SIZE OF THE LOUNGE, JUST THINK that I counted twelve strides from the entrance by the cockpit to the forward exit. Not little steps, but strides. After all, this is Lagoon’s flagship which measures just under 24 metres long, with an 11-metre beam.

The first thing I appreciate is that abundance does not go hand in hand with waste. This isn’t always the case, especially on-board large catamarans. I’ve often had the impression that the layouts of the interiors and the deck were rather random. However, aboard the Seventy7, both Nauta, who looked after the interiors, and Patrick le Quément, who designed the deck, ensured that they avoided pointless waste. 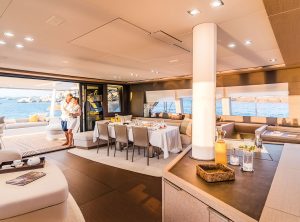 I tested the super owner’s version, with the starboard hull destined for the master cabin and the guest cabin, while the port hull houses aspacious kitchen and another cabin set up as a gym. In the centre we find the lounge, another kitchen area and a large course-plotting zone right in front of the windscreen. The interior is obviously available in a number of different versions and the onedesigned for charter use can have up to five cabins.

In addition to the volumes, it’s impossible to overlook certain lovely details, such as the terrace over the sea that opens up from the side of the master cabin, and the direct access from the lounge tothe bow. In fact, thanks to a glass door there’s no need to go out via the cockpit and walk around the side decks. Instead you can access the living area in the bow directly. This is a great solution, because this is an area that guarantees privacy, especially in the case of aft mooring in a harbour. 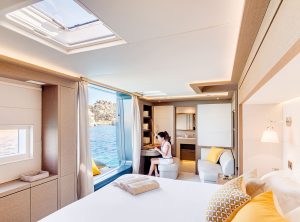 The spaces in the cockpit, the bow and on the flying bridge are so large that they can be measured in square metres. I also liked the arrangement of the tender in the stern. It is obviously positioned between the two hulls, but it has an actual platform all of its own. I experienced the practical launching system for myself, and also observed how simple it was to haul the boat. It’s very easy to approach and get the hull onto the supports. After that all you have to do is raise the platform with the remote control to find yourself out of the water in an instant.

The flying bridge serves a dual purpose: living area with sun deck, dining table and sofas and, towards the bow, the helm and controls. The bow fitting is equipped with a genoa and a Code 0.

The Italian captain Franco Petoia is evidently proud as he lets us try it out. The reaction to the helm is obviously a little slow, as you would expect from a catamaran, especially one of this size. However, you just have to take it into hand and it doesn’t seem difficult to steer. It gets up to around 45° of apparent, which corresponds to a true wind angle of about 60°, but its best reach is slightly broader. In fact, if you haul as close to the wind as possible its performance is negatively affected. 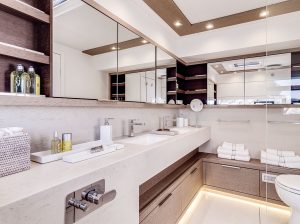 There’s some wind, not a lot, but not a little either, and the Lagoon Seventy7performs well even with just the genoa. I almost always sail close-hauled between 7 or 8 knots. When we unfurl the Code 0, the speed improveseven further, settling at around 9 knots. All this in total tranquillity. There is a lot of canvas and the bow sails inevitably obscure a large part of the view. The Code 0 measures more or less 208 m2.

Nevertheless, the command post is comfortable. The five electric winches are between the two wheels. Those controlling the boat have everything to hand. The rigid hard top is also appreciated, protecting the entire flying bridge so that you’re not affected by rain or too much sun. 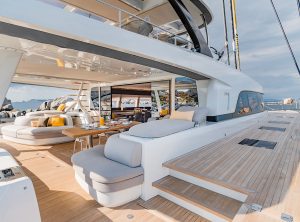 Its performance is also good when powered by its engine. Instead of the two Volvo 180 HP engines as standard, the test catamaran had two John Deere 230 HP engines. With the thrust lever right down we reached 15 knots, but this is a speed that only makes sense if you have to move quickly away from a bad-weather situation. You can cruise happily between 9 and 10 knots as if you were on a displacement vessel. The tanks hold an impressive 2,800 litres and the fuel flowmeter indicated consumption of 35 litres/hour when travelling between 8 and 8.5 knots.

During our trial in the Bay of Cannes, the sea seems a little calmer than usual. There aren’t even the numerous wakes you would encounter during the summer season. The captain tells me that during transfers from the Atlantic off France tothe Mediterranean he often encounters challenging conditions. Like all catamarans, this hull is not the best with bow waves, while it hardly seems to feel stern waves. When travelling from Sardinia to Civitavecchia he once experienced wind speeds of 35 knots and big waves, but everything went smoothly. In fact, using the genoa alone he travelled at 14 knots. 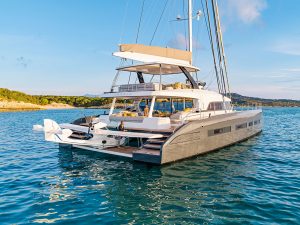 Control Room
The SEVENTY7can be equipped with a unique electronic device that controls the entire catamaran operating system. This control system allows for constant monitoring. It diagnoses any problems and also constantly checks the catamaran’s electronic system, sending any necessary notifications.