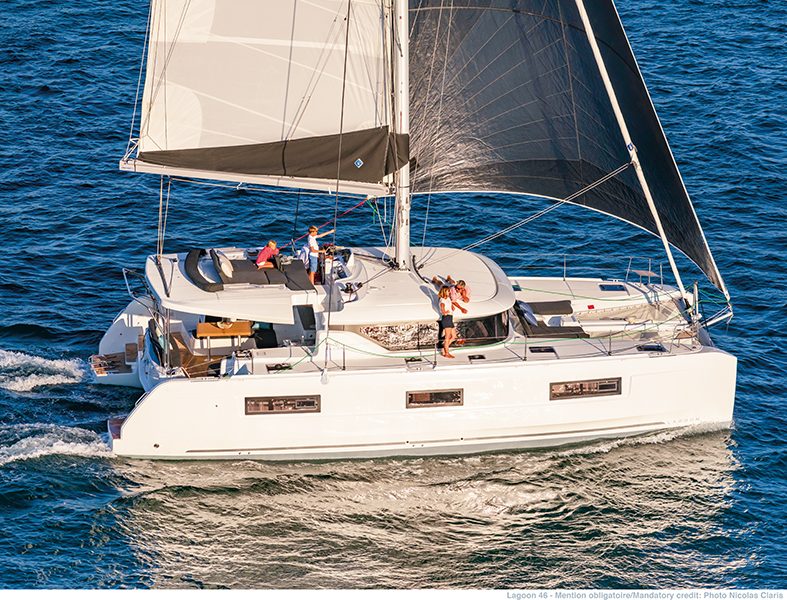 Lagoon 46, good performance and comfort. One thing doesn’t necessarily preclude the other. The search for this balance has been the guiding light in the development of the Lagoon catamarans

Comfort or performance? I can imagine product managers and designers struggling with existential doubt while contemplating a 3D model of the new Lagoon 46 – rather than a skull. The truth is that the yard’s productive cycle, for this and for all the preceding models, envisages a prototype, three production-type boats and then, if everything goes well, the real output will begin. The three boats and the prototype are there to test the boat as well as possible, and correct any mistakes before production begins. 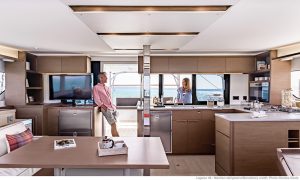 When I went to La Rochelle to try out the new 46, they were at the study stage. The one that I went out on was one of the first three catamarans. On the subject of the resolution of the existential doubt, I had the chance to talk to Vincent Lauriot Prévost, one of the two chief architects at VPLP Design who has worked on this project. He explained to me that they have sought out a compromise between the two issues.

There is no lack of room and Massimo Gino and Mario Pedol from Nauta Design have used it to its full, both in the charter version, with four identical cabins, and in the private version in which one of the two hulls is entirely set aside for the owner and the total number of cabins is thus reduced to three. 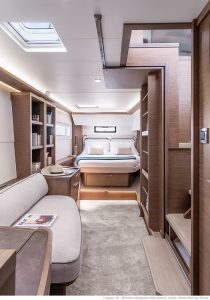 In terms of performance, the choice was made to take the sail plan aft, so as to ensure the best upwind angle. The mast has been taken further aft, and is not a through shaft, so that interior volumes are not wasted and there is a self-furling genoa measuring as much as 50 m2 to get you going, but also to sail close hauled. The boom isn’t especially long, and so the mainsail measures 87 m2.

But when we slipped moorings, there really wasn’t much wind and we preferred to use the Code 0 rather than the genoa. The amazing thing about La Rochelle, as well as the array of sailing boats in the harbour, is that despite the autumnal day, the distinctly heavy rain, and the fact that there is just five knots of wind, is that we were not the only ones on the water. It may not have been the best day for a spot of sailing, but around here you get the impression that people never waste a chance to get out on the water.

As I came on board, Martina Torrini from Lagoon explained the decisions that had been taken in relation to the layout. As I mentioned earlier, the mast is not a through shaft, or you could say it is, but it takes up less space. Lagoon has actually created a less cumbersome structure that still holds it inside the catamaran. And the fittings have been worked out especially to stop the mast supports being a hindrance. The seats around the dinette table actually end right next to it.

There wasn’t a lot of wind, and there was nothing to be done. Even when we left the harbour it was still between six and seven knots. There were eleven of us on board, so not exactly a small crew. But, despite that, the boat performed very respectably under sail. More or less at any point of sail we managed to go at only a knot less than the wind speed. 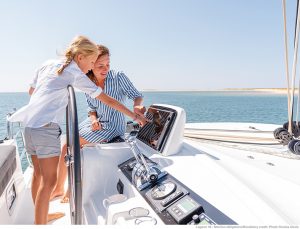 The feel at the helm is gentle, and you feel the fact that the sails have been brought aft because it tends to head up. It is an excellent feeling, not least because it is on the flybridge and the helm is centrally positioned. Visibility, both forwards and to the side, is always excellent.

Towards the stern, especially when you are manoeuvring, you should get some help from a crew member, or from a rear video camera. The winches are all easily reached, and the mainsail traveller runs along on the stern and has a Harken adjustment system, which is also aimed at ease of use, because you just have to press a button to move the hoist. It is all easy and never hard work. Of course we should really see it at work with a lot of wind, but the feeling is that you would really need a lot to give it problems.

And sailing close to the wind? Despite the lack of wind, we managed to get to a 45 degree angle. If you are happy with 50 degrees, then the speed increases slightly, more as if you were running with the wind. It doesn’t fare any worse when the engine is in use, in part because of the two 57 hp motors, while the standard fitting is a pair of 45 hps. We easily did over eight knots when cruising, and even low revs gives a notable amount of speed, because at 1800 rpm the GPS shows six and a half knots. The range is practically limitless, because the two tanks hold 520 litres each. They are very well placed, since the water tanks are very far off in the bows.

What struck me about using engine power was how quiet it was. In the owner’s cabin, there were only 56 decibels at eight knots, and at top speed – so 8.6 knots – the noise only rose to 61 decibels. That is a very low figure. The sound produced by the wave that hit the catamaran’s two bows was louder. And I am not talking about a rough sea, but that from the boat moving through a calm sea.