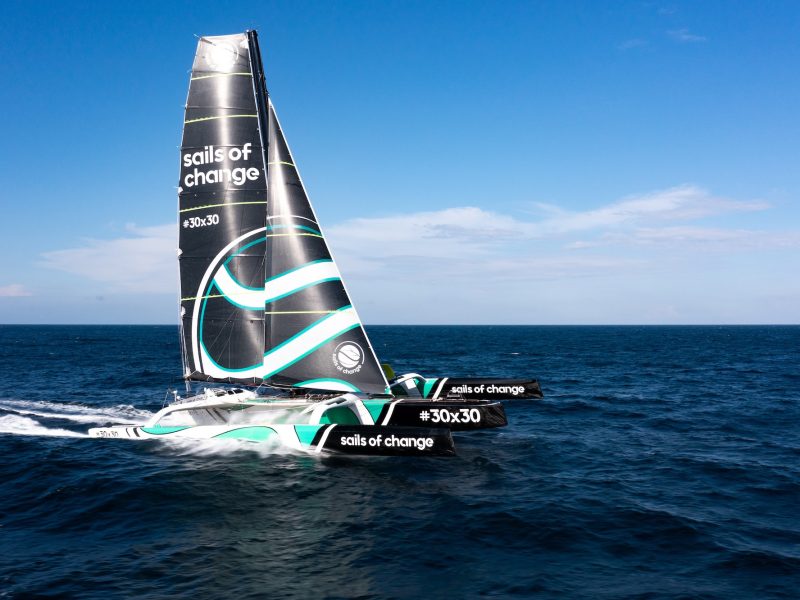 A new attempt for Yann Guichard and Dona Bertarelli together with nine crew members of the maxi-trimaran ‘Sails of Change’: they will once again take on the challenge of the Jules Verne Trophy, the record circumnavigation of the world by crew, without assistance and without stopovers.

The countdown will start on Monday 24 October. The goal is to lower the record of 40 days, 23 hours and 30 minutes, now held since 2017. ‘It is an absolute sporting goal, an extraordinary record, a time that is difficult to beat, which has been halved in the space of 30 years,’ comments Yann Guichard. From the start of the stand-by, as soon as there is a favourable weather window, the maxi-trimaran based at La Trinité-sur-Mer will be ready to reach Brest, from where the challenge will start. 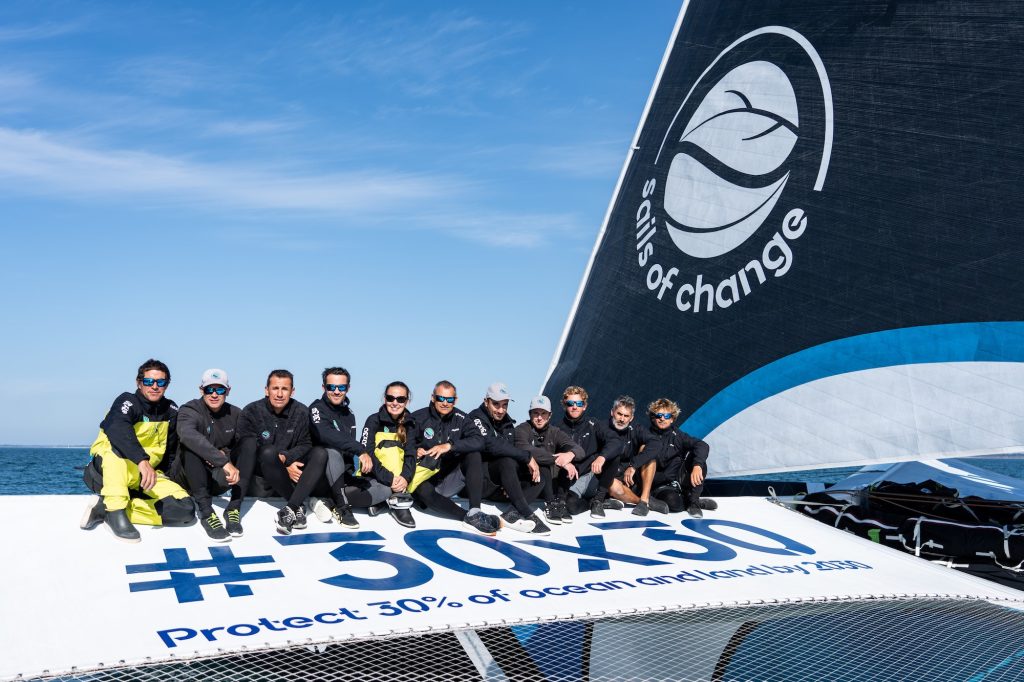 Towards the record, but without fossil fuels

“Our adventure is not only human and sporting,” says Yann Guichard, “We are committed to combining Spindrift’s programme with our philanthropic activities and the values we hold dear for the protection of the ocean and the earth, a message that Dona already conveyed during our first attempt in 2015”.

“For 20 years I have been involved in the creation of large marine protected areas and the preservation of biodiversity,” adds Dona Bertarelli. “The close link between the health of the oceans, the climate and our health is now certain”

Since last year, members of the Spindrift team have been preparing for this record-breaking attempt to sail around the world without fossil fuels, a ‘challenge within a challenge,’ adds Yann. ‘There will be no heat engine to run the electronics, the media, the watermaker and the water heating for food. To make up for this shortcoming, we have solar panels, two wind turbines and a methanol fuel cell on board’.

Together with Yann Guichard and Dona Bertarelli, reporters on board, there are nine other people ready to set off on the Jules Verne Trophy challenge. 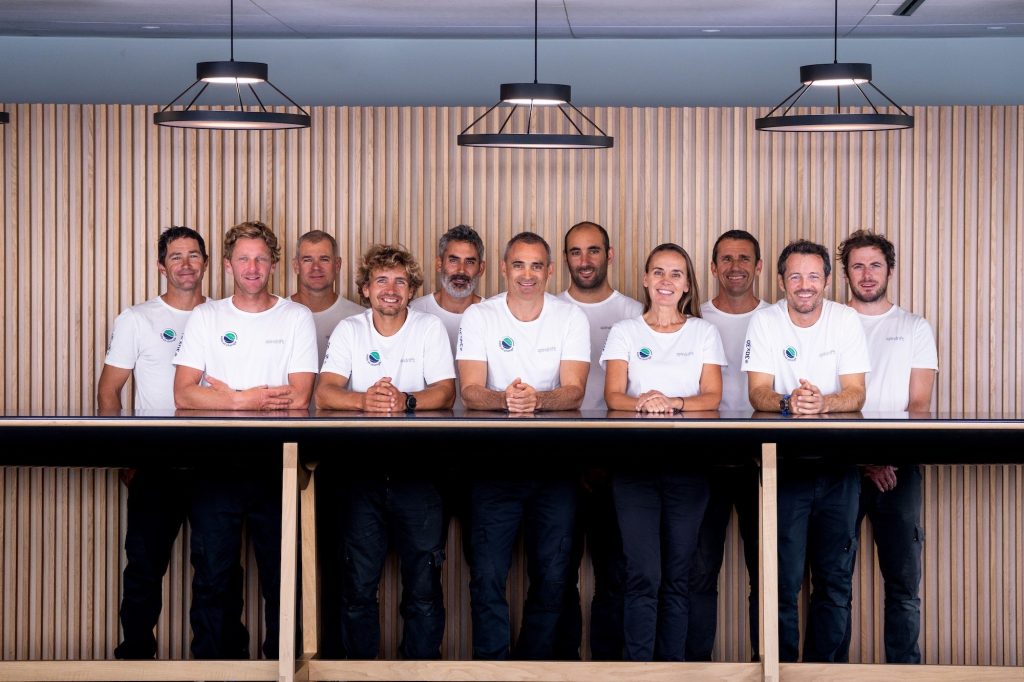 Sails of Change, built to excel

At 37 metres long, 23 metres wide and weighing 21 tonnes, Sails of Change is the largest ocean racing trimaran ever built and has a track record to match. Launched in 2008, the boat held the Jules Verne Trophy from 2012 to 2017 (45 days, 13 hours). Sails of Change was purchased by the Spindrift team in 2013, winning the Route de la Découverte (between Cadiz and San Salvador) and performing well in the Rolex Fastnet Race (twice) and the 2016 Transat Québec – Saint-Malo. 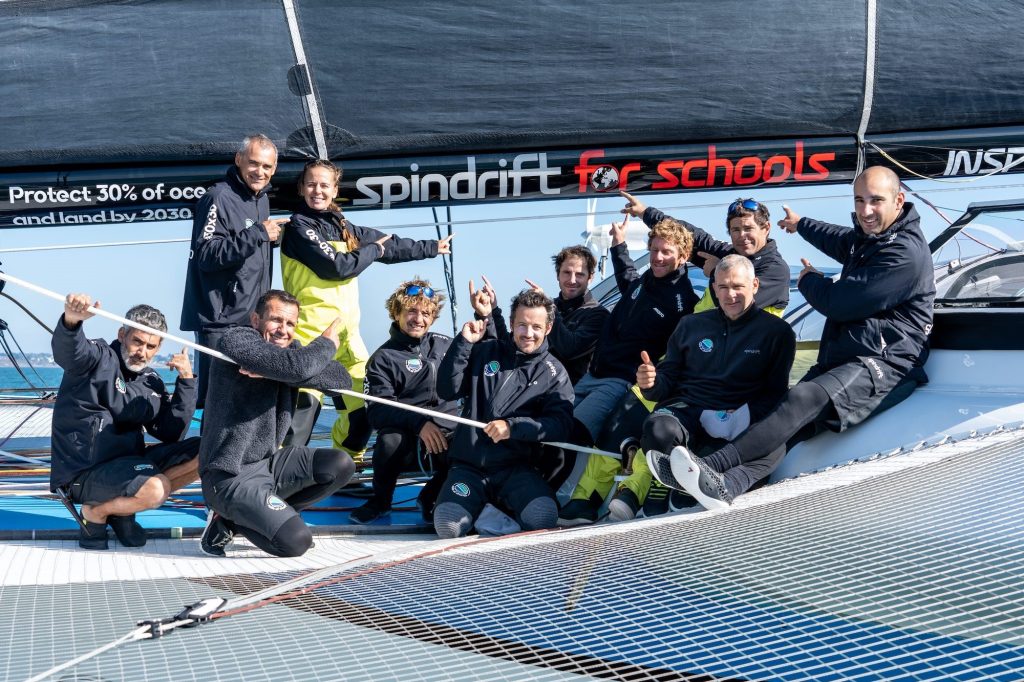 In 2014, sailing solo on this giant of the sea, Yann Guichard took second place in the Route du Rhum.

Spindrift and all the other boats in the stable have the goal ’30×30′ supported by more than a hundred countries. They convey the message of the scientific community that it will be necessary to protect at least 30 per cent of our oceans and land by 2030 through networks of protected areas in order to prevent mass extinctions and watch out for climate change. “The degradation of our oceans, land and freshwater systems is destroying the planet’s ability to sustain life,” says Dona Bertarelli, adding immediately afterwards: “This mission we have been pursuing for a long time gives an extra impetus to the whole team and our challenge to go around the world.

Dona and Yann are ambassadors of the International Union for Conservation of Nature (IUCN), the world’s largest and most diverse environmental network, a global authority on the state of the natural world and the practices needed to save it. Last 5 October, at the Sport Positive Summit in Wembley, Dona and Yann formalised a new partnership between IUCN and Sails of Change called ‘Sports for Nature’, to help sports organisations mitigate biodiversity and climate impacts and take concrete precautions to protect biodiversity. “As an athlete, the link between sport and nature is very clear to me. Athletes need clean water and clean air for their performance and therefore have a natural interest in protecting the environment,’ says Yann Guichard.

Dona and Yann are also committed to this goal with the donation fund ‘Spindrift for Schools’, created in 2014, to raise awareness of environmental issues among young people. The pedagogical resources, which benefit from the approval of French National Education and the support of UNESCO, are thus made available to school teachers. The contents will also be repeated during the world tour to bring young people closer to this adventure in the planet’s oceans.