Joker Boat Coaster 650 Plus, when the new marries tradition 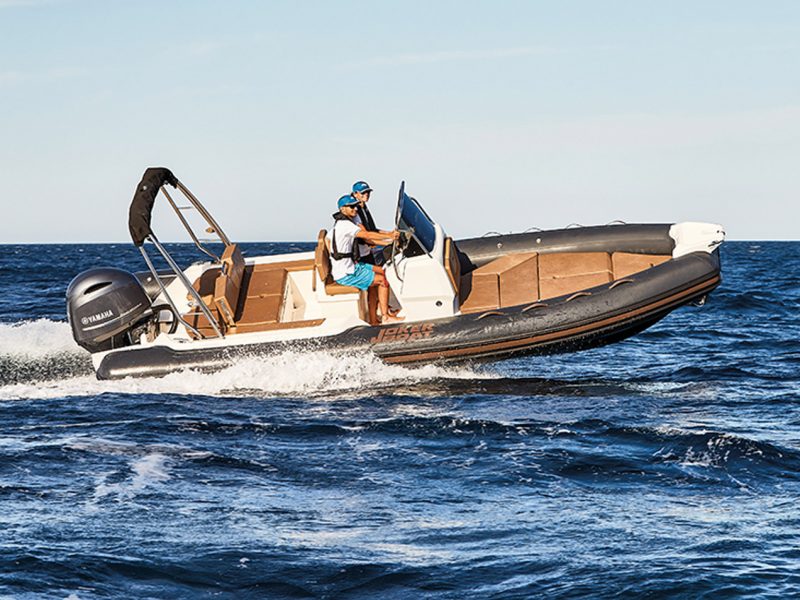 One of the best-known inflatables on the market has been updated. Its look has changed, but the functionality and performance remain. It combines superbly with the four-cylinder Yamaha 200 hp

Updating what is without question an icon in the inflatable sector is no easy matter, but to do that Joker Boat has pulled off a balancing act, walking on a knife-edge between innovation and tradition. A painstaking restyling was requested from the talented designer Federico Gerna, but the boat has also remained firmly based upon the foundations which over the years have made the Coaster 650 so popular amongst RIB fans. The foundation for all of this is still the beautiful hull designed some years back by Franco Donno, which in this case has been refined to conform to the needs of carrying a latest-generation outboard, and the famously tough build delivered by the yard based in Cologno Monzese. The watchword in this process was functionality. Working from a solid starting point, the aim was to make using the boat still more pleasant by working on a series of elements, some of them minor, some fundamental. 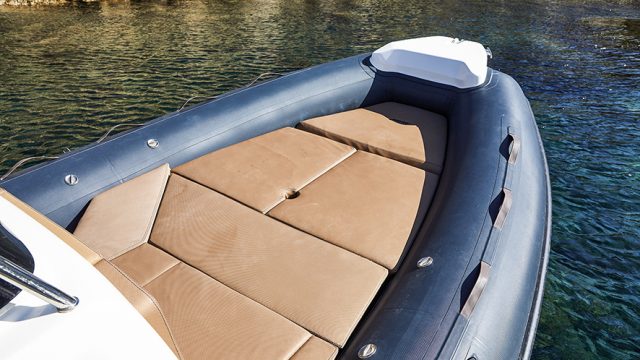 The certified length is unchanged at 6.57 metres, but the Plus version of the Coaster 650 is a further 30 centimetres longer overall. The beam in the bow has increased by 15 cm so the sun pad is larger than on the old 650. The central section has been completely redesigned: the sofa is full beam, it can take three people, and can be transformed into a second large sun pad, which stretches as far as the fibreglass side platforms above the tubes. The design of the central console is new, and it also benefits from more space for the lockers, including room for a fridge, which was missing from the previous version. 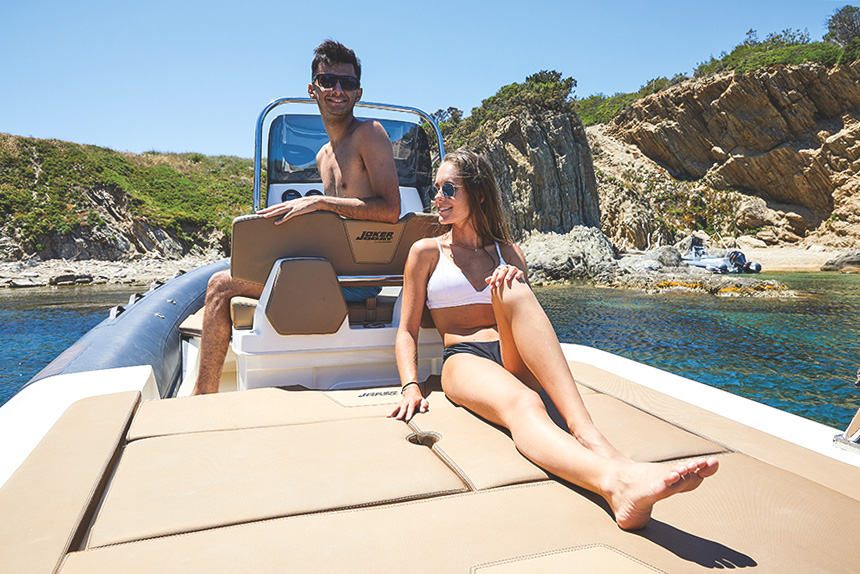 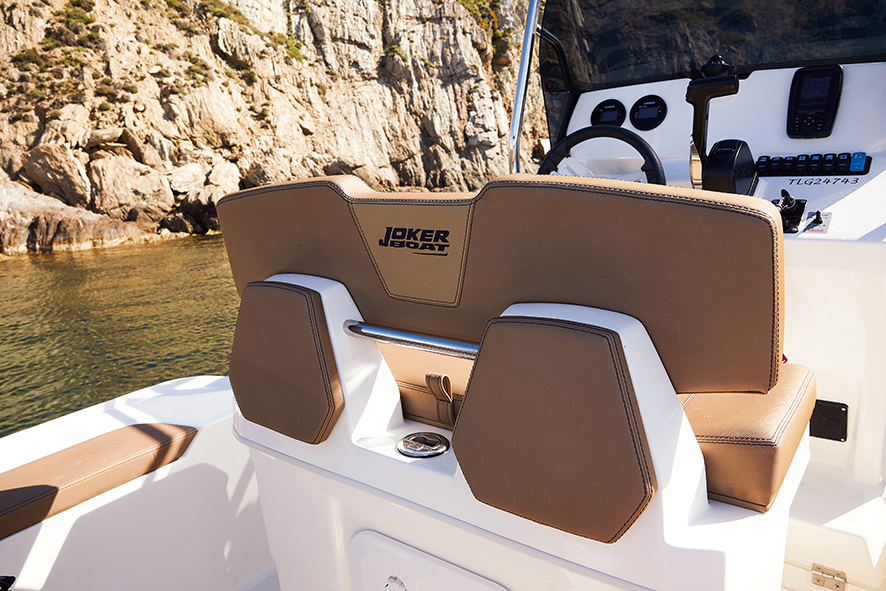 Amongst the numerous details that have been worked on to improve the onboard experience while cruising, the one that stands out is the larger size of the sun pad, both in the hull and the stern.

The process of perfecting it continues deep into the stern of this seven-metre boat, and both the engine well and the swimming platforms have been updated. The well can now easily be walked over, whereas the platforms have been extended beyond the ends of the tubes. In terms of construction technique, they have also worked on the joint between the hull and the deck to get the best out of the spaces and to optimise the assembly processes. Yet the inflatable is as easy as the previous model to transport on a trailer, another factor that shows how versatile this boat is. What about when underway? There weren’t any surprises – Joker’s best seller confirmed all of its qualities, in its Plus version as well. 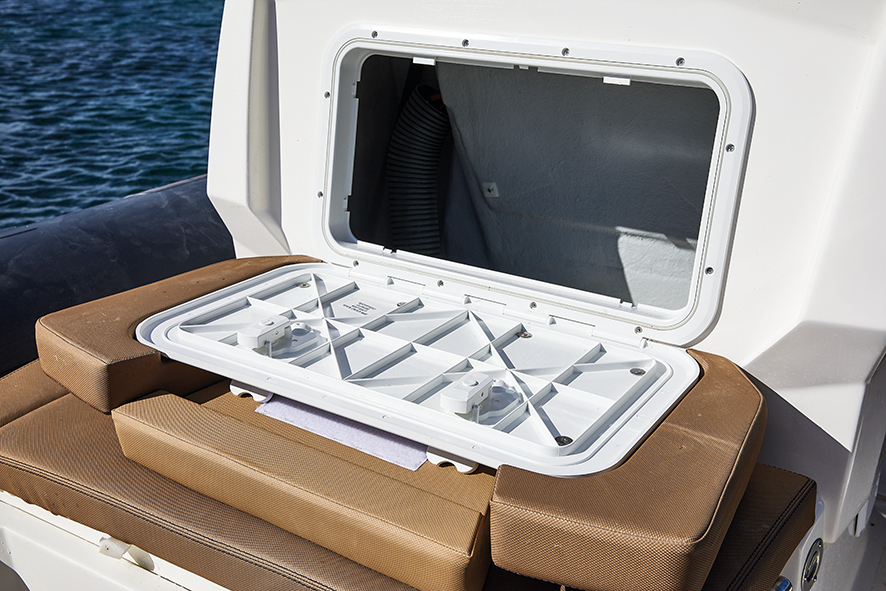 THE NEW COASTER 650 PLUS HAS INHERITED THE CELEBRATED HULL FROM ITS PREDECESSOR, WHICH HAS NOW BEEN OPTIMISED TO COME INTO LINE WITH THE PERFORMANCE OF MODERN OUTBOARDS

As I said, Franco Donno’s hull design has been revisited, but its seafaring quality is unchanged. I had the chance to check that in the Gulf of Genoa on a day with waves that were not especially high, but they were crossed and tricky because they originated from the coming together of the last gasps of a strong Libeccio swell and a stiff new wind that was arriving from the North. I had a lot of fun with the maximum amount that can be fitted on the transom, 200 horsepower, coming in this case from a Yamaha D200F, and even went a bit beyond what might have been considered prudent. The feeling was always one of safety and being in complete control of the boat, something that wasn’t easy given the sea conditions. The interaction between the hull and the tubes was perfect. I noticed that it was very stable when turning, and then a pleasant lightness when going straight ahead, where only the very end of the hull stays in the water. The propeller and gearcase (now in XL size, whereas on the previous version it was an L) work perfectly. 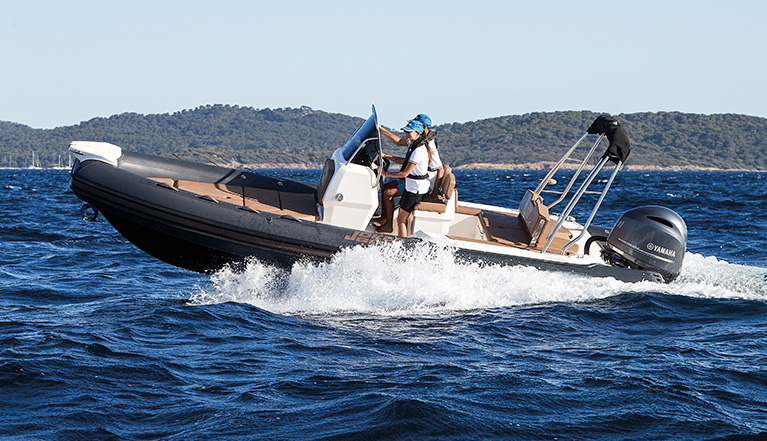 Like its predecessor, the new Coaster 650 has confirmed itself as performing very well when underway, exhibiting its ability to hold a course precisely and not suffer from wave impact, even on days with complicated weather conditions.

With the throttle right open, the top speed I reached, though just for a moment, was just over 36 knots. That was something I hadn’t expected, given the state of the sea. But besides that feat, what is much more worth noting is how easy it was to do a fast cruising speed of 28 knots, with more than reasonable fuel consumption figures, of 33 litres per hour, while nicely settled in the steering position and carving out some very precise lines. And finally, I should mention that the economy cruising speed, which reflects the point of maximum efficiency, was at 21 knots. Here the consumption level that I measured was just 0.95 litres per nautical mile: that was a notable figure, above all if we consider that the sea and wind certainly weren’t on our side.