Heritage 9.9, in wood we trust 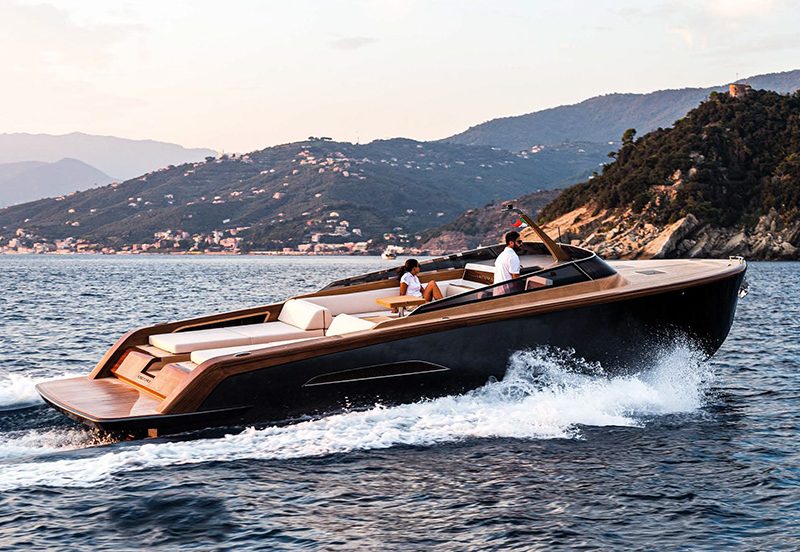 It’s not just nice to look at, but is also a lot of fun at the helm. The new motorboat by Castagnola has been made for people who want to get out on the water, and to do so in style

«EVEN THOUGH HE DIDN’T USUALLY SHOW HIS FEELINGS, I think my grandfather would have been proud of what we have created», says Gabriele Maestri, a third-generation shipwright at the Castagnola boatyard. Five years have passed since the Lavagna-based firm’s last model was launched, and now Gabriele’s turn has arrived.

The yard is now called Castagnola Yacht, and their boats are built in Wood in Tech Skin (WTS). In practice, that means applying the most modern technology to a traditional wood construction technique. «We have used hardwood mahogany strip planking, which provides excellent longitudinal structure, and then added two carbon-fibre biaxial strips and a small layer of sacrificial glass, which is only used in the exterior coating», Maestri explained to us. 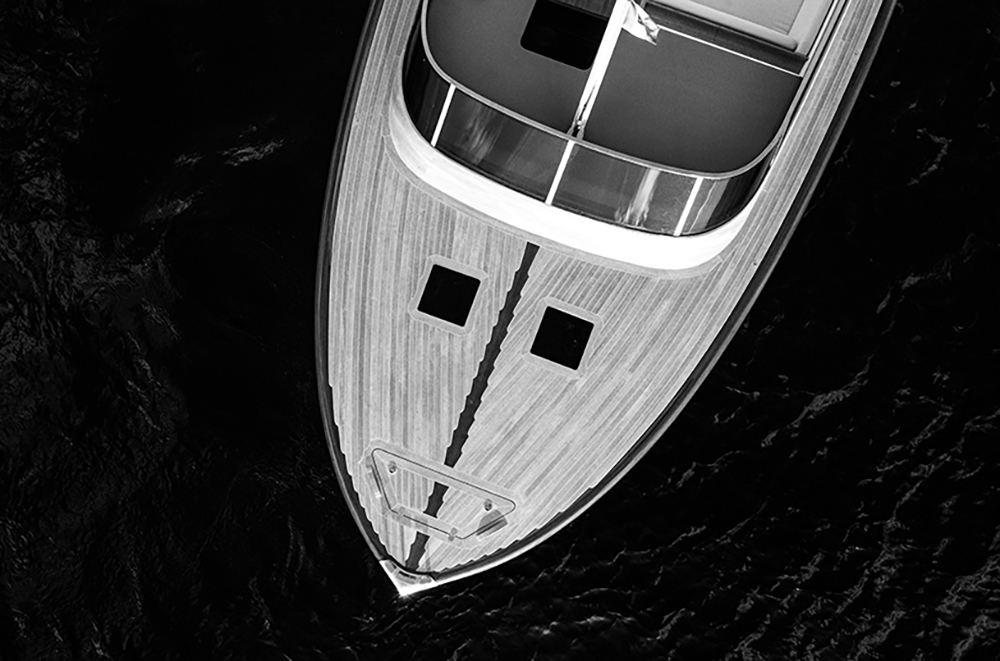 The mahogany planking and carbon-fibre biaxial strips make the structure very rigid. Proof of that lies in the fact that at just under 40 knots, you don’t hear any kind of creaking.

It’s still wood of course, and purists can breathe a sigh of relief as the only changes are in the construction technique. Strip planking means that 3D files and numerically-controlled milling can be used. It still takes great skill from the shipwrights and requires significantly more time than just using fibreglass. The skill of the workers is combined with the most modern design and construction technology. 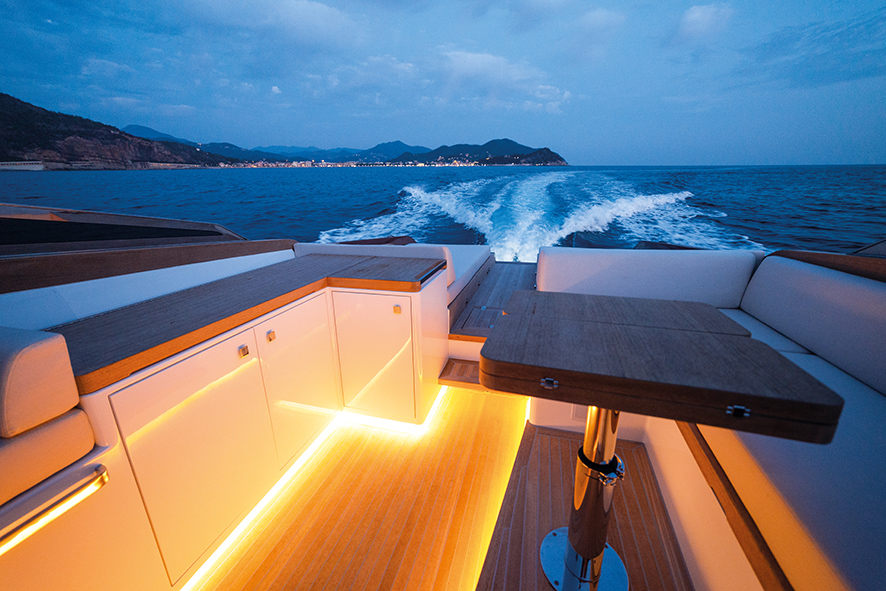 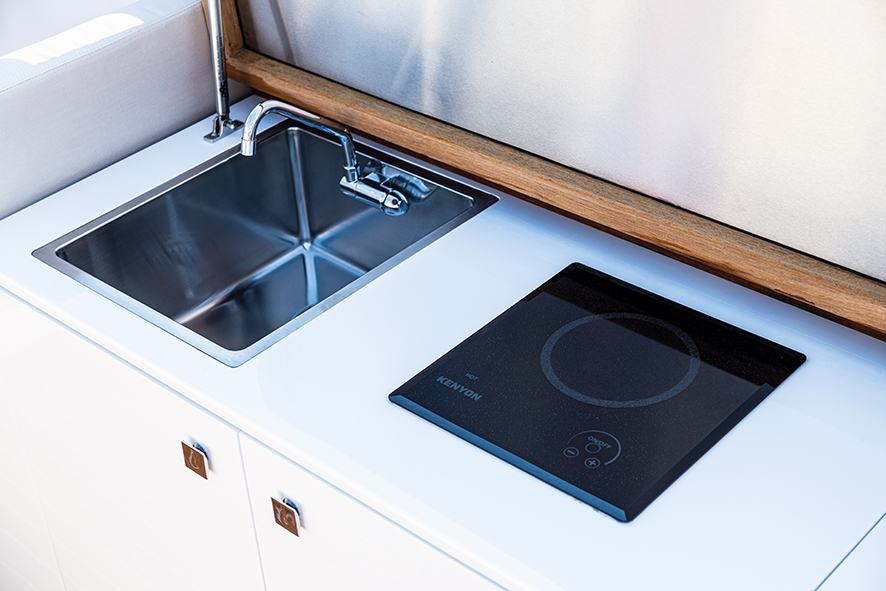 It is highly manoeuvrable, both when moving around at low revs, and at high speed. It is as easy and fun to use as a RIB.

Amongst the many boats that he created during his career, Gabriele Maestri’s grandfather managed to produce a 38-metre boat with three Rolls Royce hydro jets which flew across the water at 31.5 knots. And his grandson has decided to emulate this, starting from something that is a bit less futuristic. «A ten-metre motorboat is a size which enables us to execute all aspects of the build and keep control over them». As well as work is done in house, the project has had input from Francesco Rogantin’s Names design studio – who did the naval architecture – and Nauta, who designed the interiors and the deck. 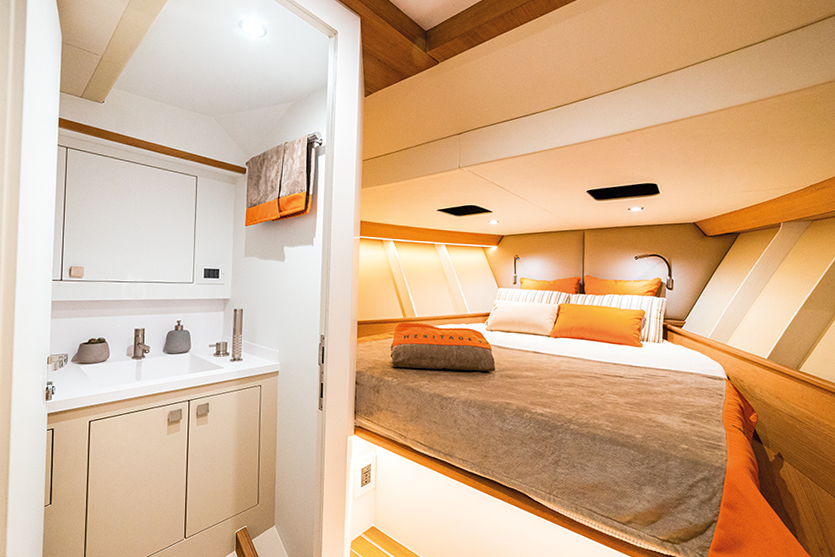 There is a cabin, with a bathroom in a separate room. Heritage 9.9 isn’t made for cruises but offers the privacy required to spend a day on the sea.

There is no lack of demand, either from Italy or abroad – and that was something we noticed during the latest Genoa Boat Show, where the Heritage 9.9 made its debut. There was a continual stream of people visiting it throughout the six days of the show. There are still people who appreciate wood, but that isn’t just an aesthetic consideration, because Castagnola also looks like delivering excellent performance on the water.

In the engine room, there are two Yanmar engines, each developing 320 horsepower, and there are also ZT370 stern drives. The first thing you notice is how manoeuvrable it is. The inboard-outboards make it very easy to move around. If you then consider adding a joystick, you can easily imagine that you could moor with pinpoint accuracy. But the stern drives mean performance above anything else. First of all because of the acceleration, but it is not just that. The sea wasn’t very rough, so we were able to push the engines to their limit: 3800 rpm and over 39 knots top speed, with consumption at that point of just 126 litres an hour, for both engines. To do thirty knots you need just over 80 litres per hour, and only sixty litres are needed when you are going at 25 knots. 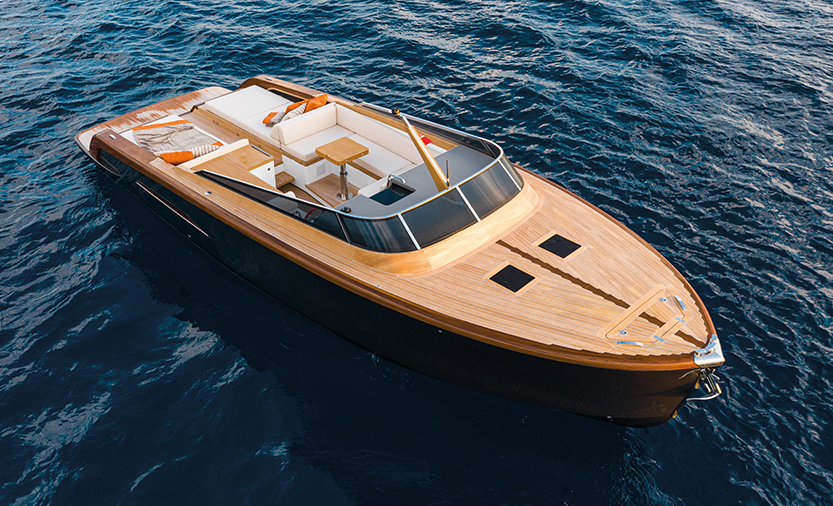 Even though it is only ten metres long, there is no lack of gadgetry. Thanks to Garmin’s EmpirBus system, you can check the engine data and your course from the plotter, as well as the lighting system and any other equipment installed on the boat.

But it is not just the figures that please you. The feeling as the helm is truly exciting. The boat is ready and willing to react to changes in course. Zig-zagging, turning back on yourself or suddenly slowing down are all thrilling. It’s so easy to steer that it feels like being on an inflatable. The water lines have been very nicely designed. The Heritage 9.9 is even too easy to helm. An inexperienced person at the helm might even lose a passenger overboard through turning this way and that at full speed. The waves that the Gulf of Tigullio had in store for us were by no means ocean rollers, but they were enough to realise that the hull doesn’t have problems in the rough sea.

The hull is rigid, there is no creaking to hear and the deck stays completely dry. I honestly didn’t expect that. I feared that the sporty lines of the deckhouse might mean bucket loads of water reaching the cockpit, especially on a day with a bit of wind and the waves that we found. But actually, there was nothing. It was completely dry, from stern to bow. 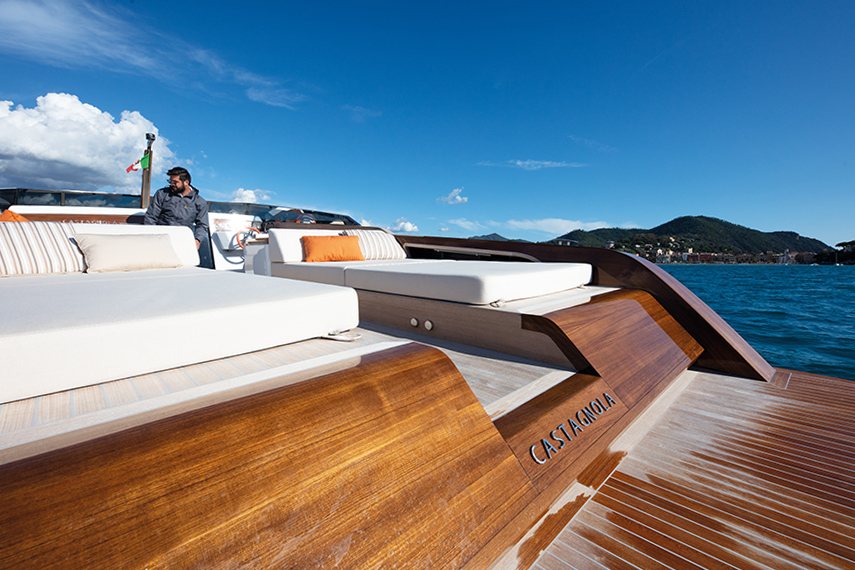 The details and the accessories are done to the same high level as the construction. The grab bars, for example, are all entirely of solid steel.

The trim was also excellent because the boat never sat back, not even by a few degrees. It feels as if it always stays parallel to the surface. The only thing that concerned me when we were underway was the flag pole. Because it is in the middle of the windscreen, it takes away a bit of visibility when you turn tightly, and it looks a bit like one from a ship. I realise that I am nitpicking when I say that, and also when I see the tilt of the plotters at the helm station as being a mortal sin. They are very horizontal and so take sunlight directly, and there is a risk that they won’t be easy to see. Heritage 9.9 essentially shows that wood is still a perfect material for building boats. It feels like it belongs at sea, and works very well when underway, and is lots of fun because it is exceptionally manoeuvrable. And to think that some people believe that it is only good for model ships enclosed in glass bottles 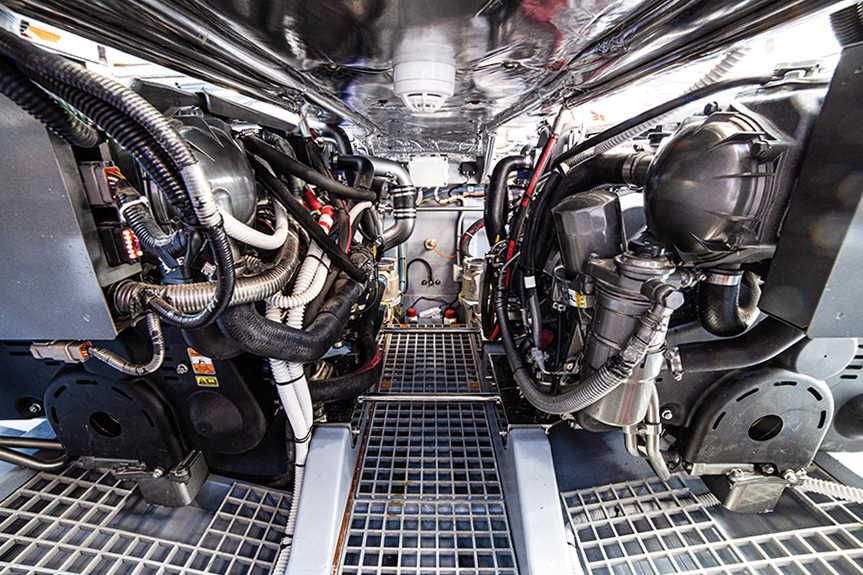 At the end of the test we went down into the engine room, and it didn’t feel warm at all. That is thanks to the wood, which helps prevent overheating below decks.

Engine room
The two Yanmar inboard/outboards each develop 320 horsepower and produced excellent results in terms of speed, acceleration and manoeuvrability. The yard can turn out versions with water jets, straight-shaft engines or outboards.

EC CERTIFICATION: CAT B or C