Guillaume Plisson, beyond the image 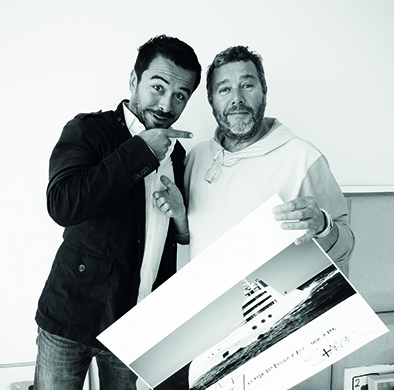 Guillaume Plisson has been a photography enthusiast since he was 12. He has developed an emotional and personal approach with this art. For more than 10 years, he has been appointed by Paris Match and Le Figaro to attend the most important international nautical events. Looking always for natural events, Plisson expresses all his admiration for light, particular details and the precision of the shot

GUILLAUME WAS BORN TO THE TRADE, AND HIS FATHER PHILIPPE WAS A HUGE SOURCE OF INSPIRATION TO HIM. Carlo Borlenghi and Franco Pace also influenced him ever since he was fascinated by their works as a child: «They seemed absolutely incredible to me – my father and the others who were around us were really inspiring, like Sebastião Salgado, a Brazilian photographer considered to be the greatest in the world at the time. I refer a lot to Salgado, especially in my work in the shipyards. It all stays with me as inspiration and background, because I always put something of mine in every work so that it is recognisable as a work by Guillaume Plisson».

When he started working, he was still using celluloid film. Now, at the age of 43, the world has changed a lot: «I grew up in an environment with lots of photographers around, starting with my father, and then Yann Arthus-Bertrand, Olivier Föllmi and many others. I used to look at their books in order to learn about framing. I worked in my father’s laboratory where he developed loads of black and white negatives. This is why I love black and white, and above all I love the developing process with its peculiar odours and waiting times. When I was 18, I left to do military service, and for two years I photographed and developed all the military services in Polynesia. I worked in a laboratory in Tahiti where I received rolls to develop and then send back to their bases. It was an amazing period. New technology has certainly made my work much easier – there were a lot of variables that could affect my work before, particularly during the development phase in the laboratory».

Mr Plisson continued: «New technology has made everything easier, but it has also made our work more extreme. Today, you have to be at your best in any condition in order to obtain results, the technology aspect and a complete knowledge of software and equipment and their respective potentials are fundamental. Then there’s the photographer, who has to do their best using their professional skill and technology. Today, the production chain is much shorter, and I do everything – from preparation to sending the digital photo for its various uses. However, I’m the one who decides the final result, and I love that. I use software to optimise a job, but I absolutely never use image editing. Technique is the starting point, and you need to understand all aspects of it so that it’s just a tool you use to achieve the result: when you’re working, you mustn’t even think about the technical aspects, you have to have complete mastery of them in order to concentrate on the other details. Without technique you won’t get good photos, but you also need to have a detailed knowledge of the subject you’re photographing in order to obtain the maximum. It’s a question of professionalism and practical skill».

Today, Mr Plisson is one of the most well-known photographers in the world of super yachts. He has a very strong collaboration with Norwegian designer Espen Oeino: «The first time I photographed these yachts was very emotional for me. Espen encouraged me to see a mega-yacht not just as an overall design, but also in its details and different profiles. The relationship with the designer is fundamental in order to understand what goes into a design and its specific characteristics, including from an artistic point of view. Before meeting Espen, I had already worked in the yachting world with Philippe Stark and other designers. I love working on the water, I sail to photograph and photograph to sail».

Before starting to photograph, Mr Plisson spends a long time studying the boat in order to know everything about it, including its specific design and concept. «I always start from the 3D model in order to get a good idea of the boat’s lines. I prepare some simulations and I get them approved by the designer before the job, so I can share my ideas with him. I propose specific points of view in relation to the design, before the shooting. This way, we arrive well-prepared with all our ideas already organised, and I use that to choose the equipment to use. Of course, a good helicopter and pilot are also essential, representing 50% of a good aerial job. Knowing what to do in advance also helps the pilot to give his best without having to improvise. Then I work using the onboard tender, the choice of situation and the best kind of lighting is entirely up to me. To do a good job, it normally takes me 3 days for shooting and 6 days of post-production. I take from 1500 to 2000 photos each day. This also lets me get a range of interpretations. I like working with filters or in black and white, and I also use cross-processing. Before digital, I applied it when developing the film, while today I can apply it directing during production».

A subject can always be interpreted in a different way according to the natural light, surroundings, different sea conditions, and changing the conditions obviously changes the results. Mr Plisson continued: «During production I live on board the boat for the shooting, so I can take best advantage of the different lighting conditions. I work for around 20 hours a day, from the first light at dawn until it’s completely dark. There are a lot of variables: technique, lighting, location, shadows. My work is not a job, it’s a passion; this is why I am totally dedicated to it. I love my work, the boats, the architecture, the shipyards, the perspective, the people who live and work in this world. We work in a luxury environment where every single detail is fundamental, and this fascinates me a lot; in turn, I always try to give my best, every time. I always look for total precision in situations that are sometimes difficult given the cost of keeping these boats running. Keeping a mega-yacht that acts as a charter in dock also means asking the owners to make a considerable investment in terms of direct costs and sometimes loss of earnings. A good job also brings added value to the yacht, because it definitely increases its media impact and therefore returns from a commercial point of view».