GS 34 is the model that the Forlì-based yard launched in the 1970s is back with a new design. It has the same spirit as the older model, but makes use of modern solutions to win races and to satisfy cruising sailors who enjoy speed

It was an icon in the 1970s. It encapsulated a genre: small, great boats that were very fast. It was designed by Finot Conq, and won many races, staying in production throughout the 1980s. It must have been a success because around three hundred of them were made. Who, then, would be brave enough to present a new version of the GS34?

A group of young designers, who are not long out of university and are thus full of a very youthful daring. It was a challenge that the Cantiere del Pardo liked, and took on board. And so the new GS 34 was created, faithful to the spirit of the original, but with a new, modern spin. It has kept the sporty spirit of the original. 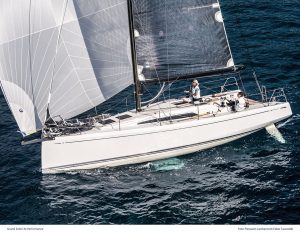 The project was optimised for IRC regattas, but can also work in ORC. This has been proved by its results: it consistently did very well in races during 2018. But this is a boat that isn’t limited to racing. It has also been designed for cruising – rather spare cruising perhaps, but nevertheless offering a comfortable experience. Cruiser racers of this size are a growing sector and other Italian and European yards, not just Cantiere del Pardo, are producing models. It is available in two versions: Performance and Race.

We tried the slightly less extreme one, the Performance version. The conditions in Cala Galera were ideal. There was a nice wind blowing between 13 and 15 knots. We started by sailing upwind with the main sails. The tiller steering is fairly sensitive, in that it is quick to respond to changes in course.

There are twin rudder blades, which you appreciate above all when the boat is heeling when close hauled. One of the two is always well immersed in water, and works well. The feeling is that it works best running with the wind. At 110 degrees, to be precise, which is also thanks to a fairly extensive beam. The maximum width is 360 cm. And with the gennaker up and the wind at around fifteen knots, the GS 34 does over nine. Not bad.

But sailing against the wind it is best not to expect too much from it. It will sail up to 30 degrees, 28 maximum. But the speed falls right off if you try to sail too close to the wind. With this kind of point of sail, it does its best at 35 degrees. We sailed at seven and a half knots, with the true wind at just over thirteen knots. 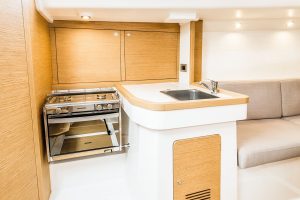 Below decks the areas have been researched to meet both the needs of racers and those of people who enjoy cruising. You can really feel that as you go forward. There is a cabin without a bulkhead, with a double bed that extends to create a bigger bed and also an extra seat around the foldable table in the dinette. But the same area can be left clear and turned into a useful sail locker. Taking away the cushions, table and dunnage which make up the base of the bed, you get the perfect place to stow gennakers or spinnakers. 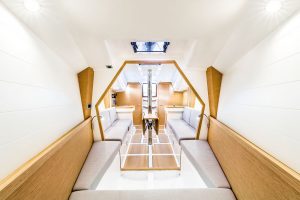 Taking advantage of the countermould in that bow area, which is useful for stowing sails, you can easily get two footholds so you can get up and raise your head through the hatch. And also, if you bear in mind that we are on board a sports boat, that performs well and can be classed as under ten metres, the available space is not too small. You can use it for a cruise because essentially it isn’t missing anything.

There is a double cabin in the stern, as well as the V-shaped berth in the bows, the dinette with the table, a good map area and a small L-shaped galley. Even the galley is generously proportioned. Just a glimpse shows you the quality of the finish. It is spartan, but by no means crude. So all in all it can compete with other similarly-sized models that been successful recently both racing and in sailing shows throughout Europe.

And initial figures on the GS 34 are confirmation that the challenge has been won. Not only has it been successful in races like the 151 Miglia or the Middle Sea Race, but it has also attracted attention during the boat shows held in the autumn.

The race version
GS34 Race is not exactly the same boat. The weight changes, because it is 900 kilogrammes lighter. That is because of the completely carbon fibre build, rather than the epoxy and vinylester resin used in the Performance version. The sail plan also changes: the mast, which is also in carbon fibre, is bigger: it is a metre and a half taller. It is also located further aft. That way you can get a square-top mainsail that is ten square metres larger, and the jib also uses an extra four square metres of canvas. There are also differences in the fittings between the Race and Performance versions. The centreboard is set further aft, and the bulb is T-shaped, with a deeper draught. Basically it has the same hull features, but with a lot more sail and less weight. Finally there is also a change in the engine.  GS34 Race is fitted with an electric motor made by Huracan Power. 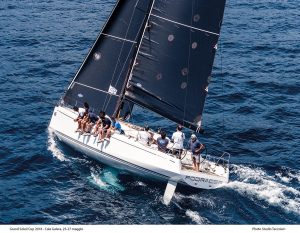