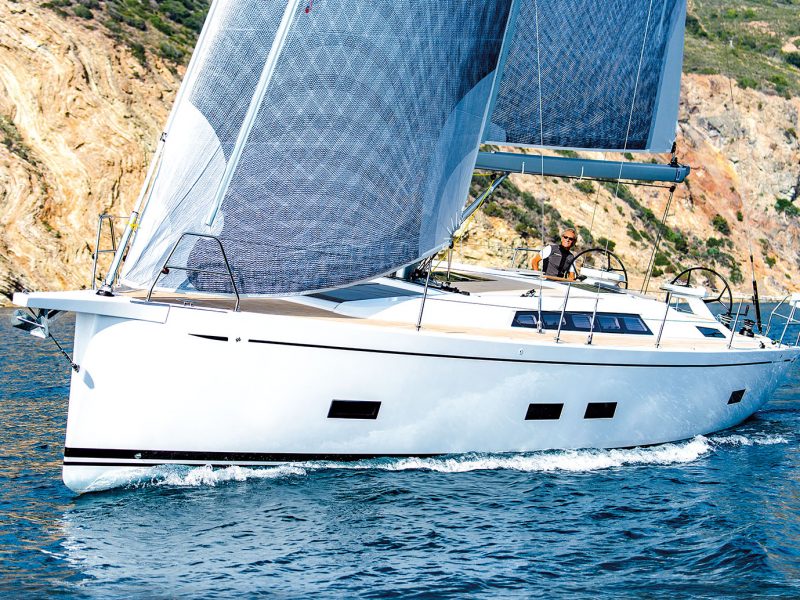 It is the new entry-level boat in the Long Cruise range from Cantiere del Pardo. It is very easy to handle, and its performance makes it fun. The lines are by Nauta Design and the hull by Marco Lostuzzi

Let’s go out, and start sailing. Point the bow south and aim for the open sea. The Tigullio Gulf is famous because often, very often, it doesn’t have a lot of wind, the water is flat and there is a sultry heat. But this time I was fortunate. I found a day that was nearly perfect, with a stiff breeze coming from the land, and not a cloud in the sky. After a morning at sea, I really didn’t have any desire to go back to harbour at Lavagna, but would much rather have gone down to Corsica, not least because I had in my hands a boat that has been created precisely to do that, to grind out a lot of miles.

The Grand Soleil 42 LC is the entry level boat in the Long Cruise range from Cantiere del Pardo, all of which are boats that are designed to really sail.

They do so staying true to the DNA of the Forlì-based brand, so they are fast, but the LCs are also designed to be genuinely used for cruising, perhaps without many people on board. Everything has to be simple. Even in the smallest boat in the family, the key thing is being easy to handle.

All the rigging is directed underneath deck level to the steering position and is managed using two winches (which can be electric, as an option) close to the wheel. They are helped by two small lockers that are well designed to gather the ends of the lines. Still thinking about easy sailing, the mainsail, with vertical battens, furls into the mast, and the jib is self-tacking, with the track at deck level. Going forward, the carbon fibre bowsprit is designed to fit a gennaker or Code 0, as well as being a support for the anchor. 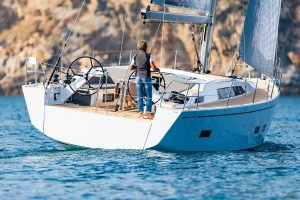 Like the 52-foot model, the Grand Soleil 42 LC is also available in a sports version, which was the one that we tried out (which is also the one that is most popular with clients): without a rollbar and without the benches behind the helmsman. This deck layout also has the clew of the mainsail fixed in the cockpit, rails to rig the genoa to 106% and the mast extended with steel stays.

But all this simplicity in the rigging shouldn’t deceive you. There is no lack of performance and fun. Far from it. Part of the reason for this is the narrow rudder blade that is 210 centimetres long, which means that the sensitivity on the twin wheels is excellent and steering the GS 42 LC is a pleasure both in terms of sheer performance figures and also the feeling when at the helm. Close hauled, with the true wind at 12 to 14 knots, with a few nice gusts coming in at as much as 17 to 18, we sailed at an average of 6.8 knots, and just by bearing away a few degrees we could sail steadily at over seven.

And even when we unfurled the Code 0 to get on a broad reach, we did as much as 9.6 knots (at 130 degrees), and stayed above nine knots surprisingly easily. But if we put simple figures to one side, what really made me enthusiastic was the ease with which this boat picks up speed again after tacking, and how it never tends to raise its bow when the wind gusts, and how it doesn’t ever feel as if it is dragging much water along with it. And finally, there is also the fact that it always feels as if it is running on tracks when running downwind. 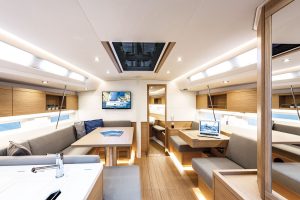 Both the interiors and the external lines are the work of Nauta Design, and you can sense the contribution of the Milanese design firm. Simplicity, functionality, great elegance. The brand is unmistakeable. Light colours dominate, as does an elegant choice of wood and materials. There are both two and three-cabin versions available, and I tried the latter. The lounge located amidships, as well as the traditional dining table with seats on three sides, faces a three-person sofa, and the central seat can become a reasonably-sized map table. 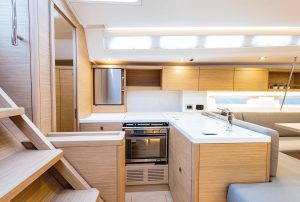 As a good Long Cruise, the Grand Soleil 42 LC has a sizeable galley: it is L-shaped and is fitted out with a large fridge and a lot of room for storage. A mention should also be given to the two bathrooms on board, each of which has a separate shower cubicle and which are of a more than abundant size.