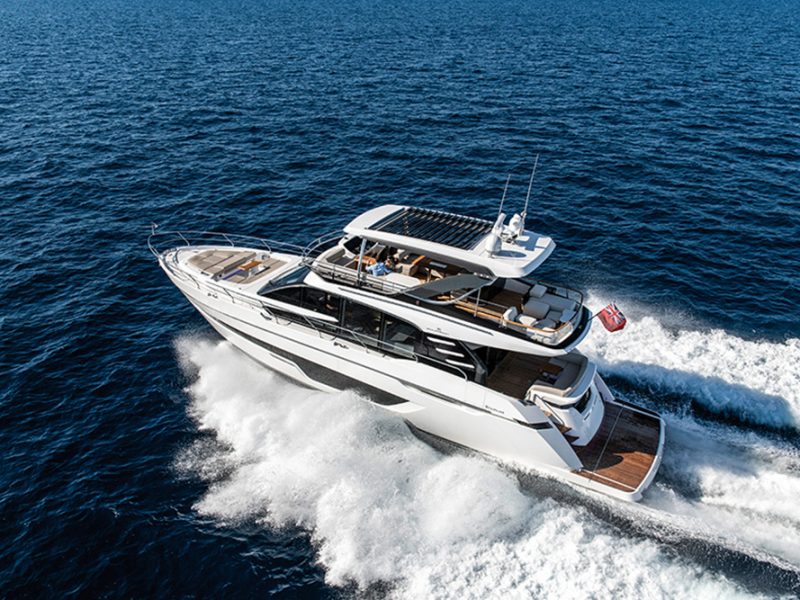 HAVING JUST LEFT THE HARBOR IN CANNES, WE SET OUT TO LOOK FOR AN AREA OFFSHORE THAT IS NOT TOO CROWDED. I take advantage of the situation to inspect the boat. I’m looking for noise, creaking and vibrations. I make my way around the main deck where there’s nothing, not in the dining area or near the steering gear. 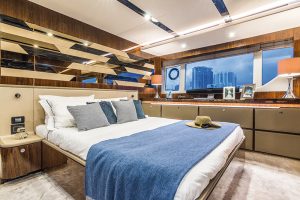 I head down to the sleeping quarters and silence reigns supreme here too, in the VIP cabin in the bow, in the guest cabin on the starboard side and even in the master cabin despite the fact it’s in the centre of the boat, near the engine room. Not content with this, I get out my sound level meter to measure the decibels. It records very little. Noise levels of above 70 dbA are only recorded over 2000 r.p.m. Practically from minimal planing through to cruising speed, the noise level is acceptable.

And yet just on the other side of the bulkhead, there are two Caterpillar engines of 1,150 hp each. In truth, the layout was designed to keep them as far as possible from the head of the bed. The wardrobes and bathroom have been positioned in between the master cabin and the engine room to minimise the vibrations and noise. This has undoubtedly worked. My last hope is up on the flying bridge. I don’t expect silence, partly because we’re travelling at 25 knots and we’re outside, but I want to see whether this area is vibration-free too. 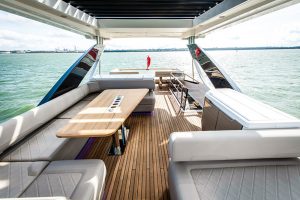 The height above the flying bridge is considerable and it’s covered almost entirely by the Bimini top, but there are no vibrations. I, therefore, ask the captain whether they’ve opted for customized systems with special elastic supports to achieve this effect. He looks at me, smiles in a seemingly benevolent way and says no, there’s nothing like that and perhaps it would be a waste of money. I have to say he’s right. The Squadron 68 doesn’t creak or vibrate and makes very little noise. This is all aided today by a flat sea, but even when we cross through the wake of one of the many yachts in the bay, the sensation remains the same: solid, strong and comfortable. Indeed, comfort at sea is also about this. 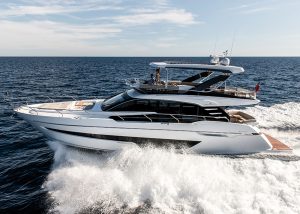 The boat has important volumes without the visual impact being compromised by a weighted design. The line is classic and balanced with a pronounced bow thrust.

And so I sit on the seat by the steering gear on the flying bridge and I notice some particularly successful details. All the screens have a sort of sun shield frame at the top that ensures optimal display visibility at all times, even when the sunlight hits them directly.

The soft top solution is also excellent. It’s different from most of those found on flying bridges because it’s not simply a fabric curtain that slides between two grooves. This one has a “Venetian blind” effect with more rigid strips of fabric. The result is superb, because as well as being able to have it completely closed or completely open, there is also some middle ground, like Venetian blinds. Perfect for not locking in the sun’s heat and allowing for greater air circulation. This is not a very important feature when travelling, but it’s essential when you’re moored or proceeding at a very slow speed. 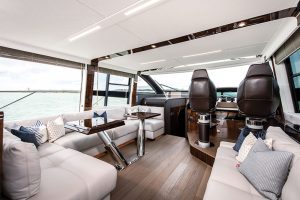 The sensation at the helm is good. The boat tilts very little, but that’s not to say it doesn’t turn. It’s very easy to handle and the V-shaped bow cleaves through wake waves very well. They’re certainly not very challenging, but you don’t even notice when crossing them. The performance is also good, given that 13.6 knots and 153 liters/hour are sufficient for planning, while the top speed is just under 29 knots with instant consumption of 446 liters. Fuel savings are considerable at relaxed cruising speed. For example, consumption at 25 knots is 412 liters/hour, compared to 266 when travelling at 20 knots.

The naval architecture is the work of the Dutch engineering firm Vripack, while the interiors and deck were designed by Alberto Mancini. The interiors were developed in partnership with the yard’s technical office. Everything is centred around comfort and practicality and the results appear to me to be a very good compromise. No special effects, but everything that is necessary and that the owner couple is looking for. The side decks are not a parade ground, but certainly sufficient for moving around safely. The two handrails, the guardrail and the one that runs along with the deckhouse complete the work. The space in the dinette is divided between the living areas, steering gear, and galley. It all has a 360° view, given that the sides seem to almost all be made of glass. The fiberglass concept has almost been overtaken, in the sense that there are abundant glass and less and less resin. The dinette has been designed to be used to the full, with a view towards the outside guaranteed from wherever you happen to be. 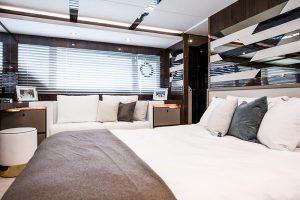 The master cabin is not just silent, but also spacious. It occupies the full beam and is accessed down just three steps from the passageway in the sleeping quarters. I appreciated the natural light here. Despite being quite low down, there are no obstacles to the natural light at the base of the windscreen. It filters down to the steps providing access to the cabins. On deck, I appreciated the ease of movement, guaranteed not only by the width of the side decks and the presence of the handrails. The bow area, for example, has a living area before you get to the sundeck. It is surrounded by the side decks and delimited by them with two hatches, similar to the ones you find in smaller boats for accessing the stern pilot bridge. If you want to, you can, therefore, stay in the bow living area without obstructing the passage of anyone needing to move quickly from bow to stern. In conclusion, because of its layout, strength, “seaworthiness” and easy handling, it is not impossible to imagine a couple of fairly experienced owners being able to sail it without the help of a professional sailor. 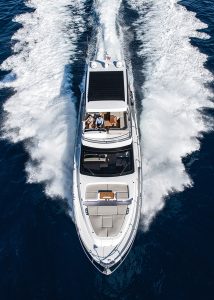 Engine room
Two Cat engines of 1,150 hp each and in-line transmission. A balanced power that allows the hull low consumption and a maximum speed of about 30 knots. As optional you can opt for twin MAN engines of 1200 hp each.