F-Line 33, euphoria on the waves 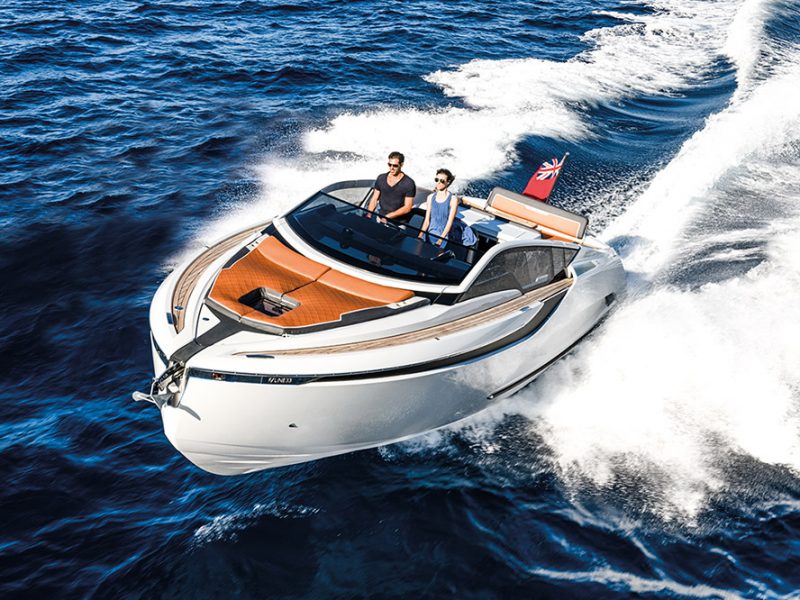 The Fairline F-Line 33 is a sports cruiser designed by Alberto Mancini which, with its two petrol-powered sterndrive Volvo Penta engines producing 430 hp each, can reach a top speed of nearly fifty knots

IT IS SPORTY AND DESIGNED FOR SPEED, and has the engine to match. On the transom there are two sterndrive petrol-powered Volvo Penta engines: they are V-8s and turn out 430 horsepower each. A total of 860 horsepower is nothing to sneeze at, especially for a boat under 10 metres long.

We found the Gulf of Cannes with waves of at least half a metre and a fairly stiff wind of between 15 and 20 knots. They were perfect conditions to go sailing, but they were also perfect to try out the hull of a small sports boat. The V-shaped hull of the F-Line 33 did an exceptional job, particularly when taking the waves head on. 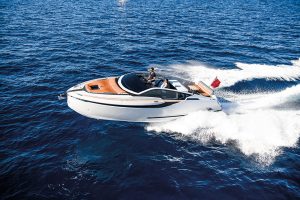 The hull didn’t jump up too much, there were no “holes” in the water and I was getting along without having to make much effort, even when I was doing nearly thirty knots. Something else that is decidedly positive is that the deck stayed dry, and I honestly wouldn’t have expected that. The cockpit design and the very aerodynamic and fairly low windscreen had made me think that the boat was going to take on bucketloads of water in those conditions. But it didn’t turn out like that. That is thanks to the waterlines, but also to the fender. The fact is that, even when you are bouncing across the waves, the spray stays away from the boat. You really have to do something wrong, like suddenly slowing down and turning into the wind, to take on any spray. 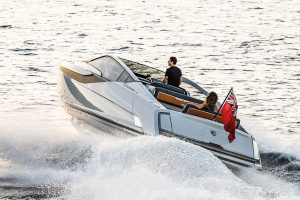 The two petrol Volvo Penta engines are powerful. Perhaps even a bit too powerful. I wasn’t able to use all of the six thousand revs because the sea conditions wouldn’t let me. I stopped at 5750 rpm, and the GPS showed we were doing 47.5 knots. Given the 8 kg per horsepower ratio, giving it everything and with a slightly calmer sea, the boat would easily have reached fifty knots. Despite these figures, the feeling is that it is lacking a bit of bite. An extra half inch on the propeller blades would probably have been a good thing. It also turns too tightly, to such an extent that it even ends up making the outer motor cavitate, although this should be easily dealt with by adjusting the turning angle of the two sterndrives.

As far as the power unit is concerned, the pair of 430 hp petrol engines is distinctly sporty. You can also choose two more restrained engines, without changing the trim and the quality of the hull. Of course, a diesel configuration of the F-Line 33 would mean it could put itself forward as a tender for mega yachts. Using the same type of fuel is certainly convenient. 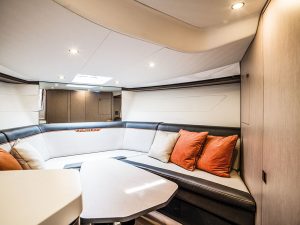 The design of the interiors and the deck was entrusted to Alberto Mancini, together with the Fairline Yachts Design Studio team. What they came up with is a 9.99 metre motorboat that has character and attracts attention, but isn’t ever excessive. Some of the solutions are very well done, like the hatches to get to the sideways, which give the idea of a protected cockpit. And then there is the stern deck area and the table in the cockpit that is electro-hydraulically operated, and the forward-facing seats with collapsible backs. With just a few moves and not much effort, you can get a different layout. So essentially it is a boat whose style is well designed, but also has an excellent hull to enjoy rough seas safely, with a strong hint of a luxury supercar like the Bentley Cabrio, or an Aston Martin.

Engine room
There are two petrol-powered Volvo V8s in the engine room. You can also opt for a diesel engine, and with less horsepower than the pair of 430s. 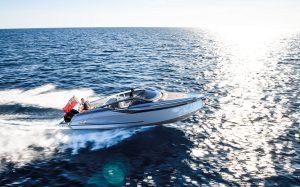 F-Line 33 outboard
At the Boot in Düsseldorf, the outboard version of the F-Line 33 powered with outboard engines was presented. The design is always by Alberto Mancini and it keeps the same sleek profile and sporty performance as the version powered with inboards. To maximize space, the ‘Ascender’ bathing platform designed by H+B Technic, has been incorporated astern. This solution enhances even the functionality and the connection to the sea, thanks to the high and low system. When raised up, it surrounds the outboard engines and in turn it allows the propellers to be raised from the water. On the other hand, it lowers making the descent into the sea easier, thanks to some steps. The propulsion is entrusted to the Mercury engines. This version boasts twin helm seats, a multi-function steering wheel, two double berths, cockpit seating that converts to a large sun bed and plentiful refrigeration both on and below deck. The price starts from 272,150 pounds, excluding taxes.