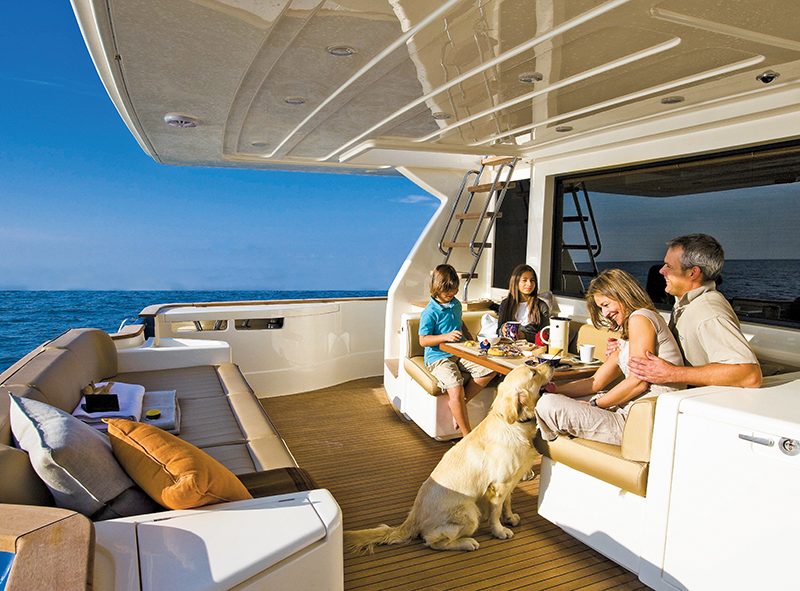 Environmental safeguarding, on-board comfort, efficiency, and lower fossil fuel consumption are all associated with the adoption of technologically advanced propulsion systems. Increasingly efficient batteries for greater autonomy. The hybrid is reality and it is more and more electric and less Diesel

DOES SY STAND FOR SUPER YACHT OR SUSTAINABLE YACHT? Until a few years ago these two concepts were completely opposed. The bigger the boat, the greater the consumption. That’s no longer the case today, primarily thanks to diesel/electric propulsion and, particularly, to more innovative systems such as the e-Motion parallel hybrid. Before seeing exactly what this involves, it would be a good idea to write a few words about the person who runs this company. Michele Maggi used to be the sole Italian agent for Mtu engines. He gained experience at the company’s site in Friedrichshafen. Before ending up in marketing, service, and sales, Michele spent two years in the assembly

chain monitoring the entire assembly process for diesel marine engines. He then returned to Italy and took over the company that had belonged to his grandfather and then his father, supplying all the world’s biggest yards with around 15,000 marine engines. The parallel hybrid offers a range of better options: cruising with traditional engines, mixed diesel/electric, or electric only.

Michele Maggi was born and grew up with diesel. Is he a traitor? Why did he switch to hybrid? No, he’s not a traitor. He’s not like those repentant hunters who become volunteers with animal rescue organizations to make amends for their sins. He simply realized that hybrid is the future of propulsion. The engines of today and the future will produce few or even zero emissions. It’s essential to consume less to pollute less. And he realized this some time ago, given that in 2006 he developed the hybrid system for the Mochi 23 M Long Range, the first mass-produced yacht to feature this propulsion. This is not as strange as it might seem if we think that Mtu in Friedrichshafen overlooks Lake Constance, where diesel-powered vessels have been banned for many years. 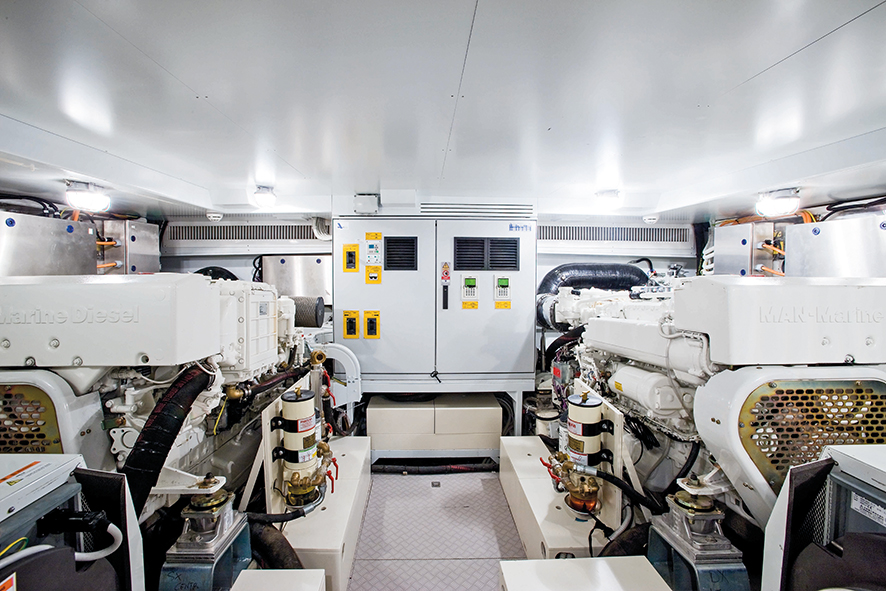 How does the parallel hybrid work
There are diesel engines with relative transmission, variable speed generators with internal inverters, permanent magnet alternators to increase the electric efficiency, the lithium battery pack, the control panel, and the panel for onboard utilities. Everything is regulated by the software. In practice, the software customizes the system in the sense that it makes it possible to adapt to the type of vessel and to the performances to be achieved. The only thing that remains to be done is lower the thrust levers. It seems to be easy, although everything that takes place is highly complex, even if we do not realize it. There are numerous operating options: diesel/electric cruising with engines off and generators on; zero-emissions cruising with electric propulsion only; “economy” cruising with one diesel engine for propulsion and electricity plus an electric motor for the second shaft; “power boost” mode with both engines and generators for greater thrust; zero emissions at anchor because the electrical utilities are fuelled purely by the batteries or even “fast charge” with the variable speed generators and the electric motors coupled with the propulsion engines in neutral at anchor too.

«I didn’t stop after Mochi 23 M, instead of continuing my research and development right the way through to the Sanlorenzo 106 of 2014, which was the first to be fitted with the e-Motion system», says Michele Maggi. What is it? It’s a parallel hybrid, a complete system that provides propulsion and energy for the onboard utilities. A full package to be installed in the engine room, ideal for yachts from 15 to 65 meters long. Maggi has worked hard to make all the components as small as possible. In practice, a hybrid can be fitted without modifying the size of the engine room. This means that this system can also be adopted for existing yachts, including mass-produced models that have to be built by the yard, and vessels already in use when a decision is made to switch to this type of propulsion. 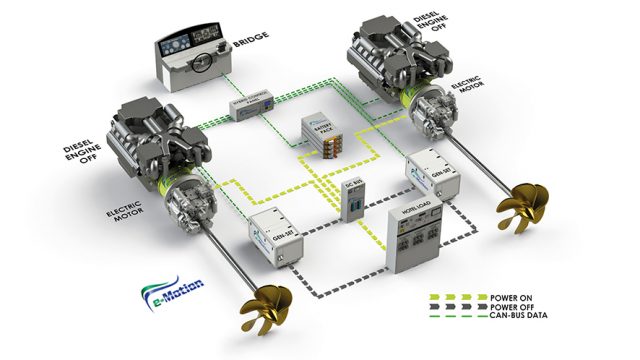 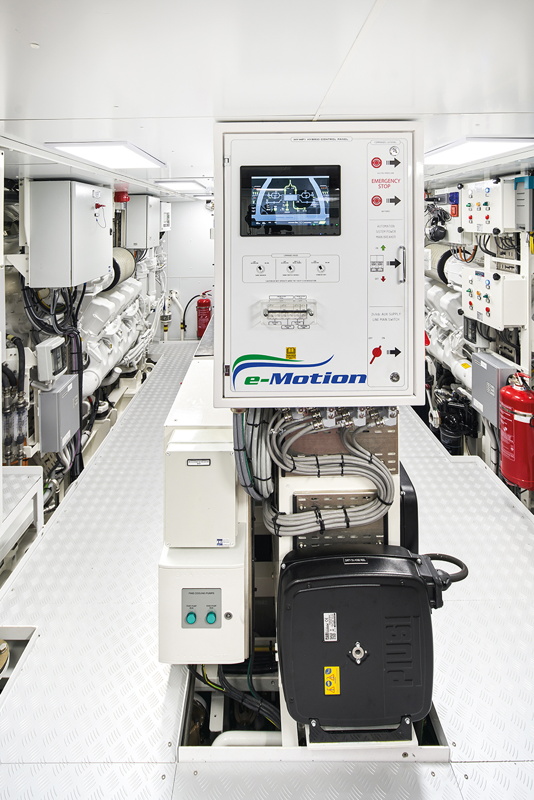 The advantages
Comfort. The must is done by having silence, no vibrations, and no gas emissions around the yacht
Same weights and dimensions in the engine room
Up to 30% lower consumption during economy cruising
Zero-emissions cruising for entering and exiting harbors and in protected areas
Power boost mode to give added thrust, using the generators alongside the diesel engines
Fast battery charging
Compact, maintenance-free system
Assistance, including on a remote basis, guaranteed at any latitude
On-board utilities can be powered for 12 hours at anchor without generators or engines
Lower exhaust gas emissions

The price is fairly accessible, especially if an engine change was scheduled anyway, this time opting for a less polluting system. «The world is going electric and the yachting industry is no exception. It’s possible to build fully electric yachts today. The technology already exists, but the cruising range is not yet sufficient. Everything depends on the batteries». 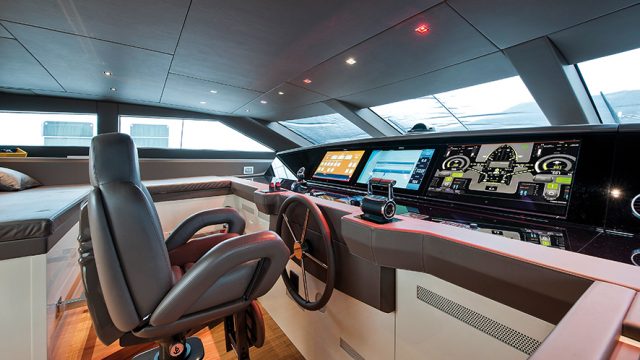 The batteries can be seen at the top, on the ceiling, in green. The generator sets are next to the main engines. At the back, next to the bulkhead, is the green Dc Bus + friction control panel. 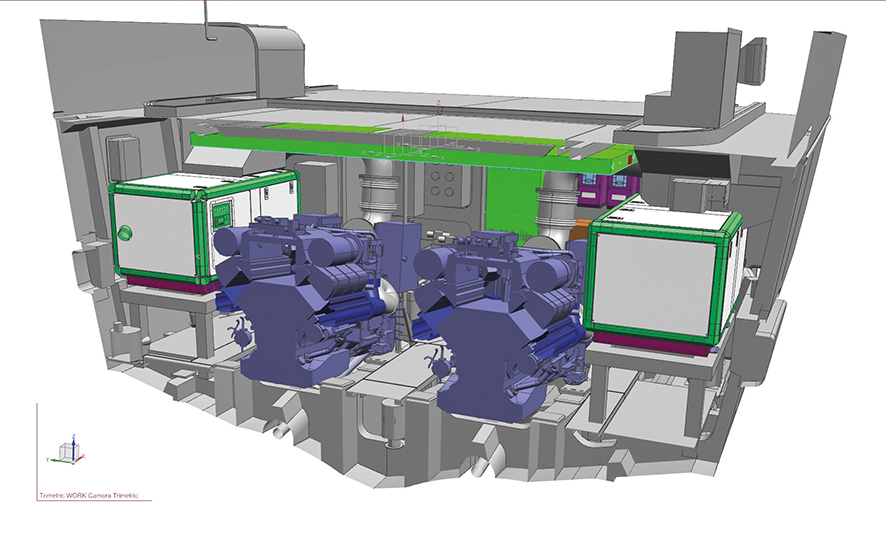 The e-Motion hybrid system, therefore, gets to grips with reality. It uses variable speed generators, inverters, permanent magnet alternators, and, obviously, lithium batteries. Those currently available can guarantee a 15 or 20-mile electric cruising range, depending on the yacht and the speed. That’s not insignificant. It means that it’s possible to maneuver around the harbor, both upon leaving and returning, and perhaps even to cruise to a bay before stopping. Twenty miles of electrical cruising are often enough to meet daily requirements. 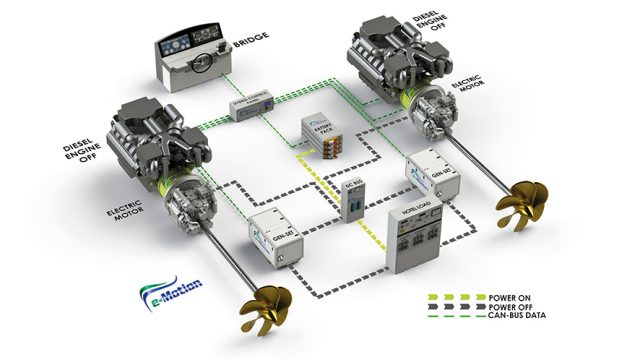 Displacement and semi-planing boats are ideal for the hybrid system. High speeds are what absorb the most energy. A displacement yacht needs 200 kWh, while an amount of 3,000 kWh is needed for planning.

Current systems generate noise pollution. During approaches or exits from ports, they release gas and particulate matter, which remains in the air for many hours every day, as well as disturbing the neighbors when you are moored. Think also of waiting in line to refuel at the filling station or when waiting for mooring assistance. By doing all these manoeuvers in the full electric mode you avoid disturbing others and the emission of tons of CO2 and NOx into the environment, saving fuel and maintenance costs.

When the batteries are not enough, the generators come into play. «The more efficient the batteries, the more zero-emissions cruising, but our systems are already prepared for the future. Replacing the batteries is easy, meaning that if more efficient ones come out in a few years that offer a cruising range of perhaps 500 miles, in displacement mode of course, all you have to do is replace them. And in the not-too-distant future, the system will already be able to offer electric-only cruising, with the generators having the sole task of ensuring that the vessel will not be left stranded in the middle of the sea». In short, the diesel/electric system of today will become more and more electric and less diesel in the future, until becoming fully electric. As we know, this technology comes from the car industry and this is why we can rightly expect rapid developments. In addition to the propulsion system, e-Motion’s electric mode is used for all the onboard utilities. It guarantees 12 hours of service autonomy at anchor, without using the engines or generator.

In this sector, it has always been thought that the equilibrium point would be achieved when the cost was under 100 dollars per kWh. If a battery can achieve this, then it is more economical to make an electric car than one with an internal combustion engine. This is what is known as energy density, namely the cruising range to recharging speed ratio. This equilibrium has already been reached in cars and it is no coincidence that Volkswagen and Mercedes are making numerous full electric models. Volvo and PSA have announced that in a few years they will stop making cars with combustion engines, while numerous northern European countries and the UK have announced that it will no longer be possible to sell cars with combustion engines in their territories from 2025.

2025 is a key year. Many countries have established that by this date all new vehicles sold will have to be electric, and the yachting industry is also adapting. 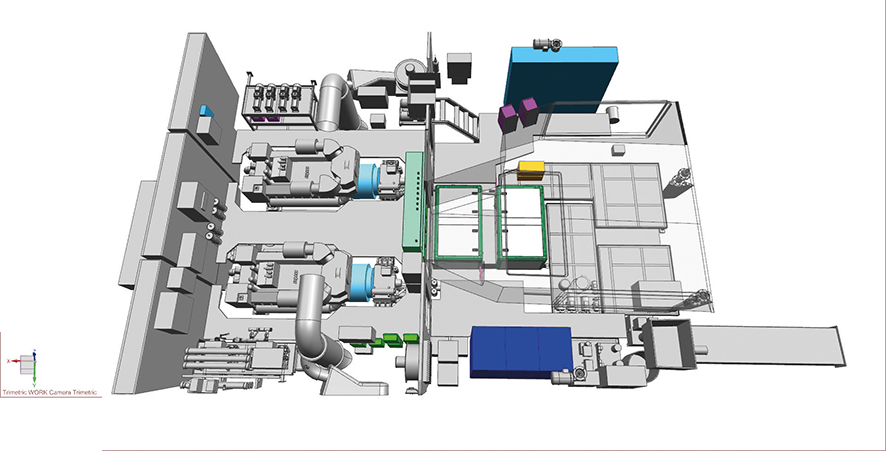 The Dc Bus connections in pale green can be seen on the bulkhead. Behind the Dc Bus with a green frame are the generator sets. The isolation transformers are in deep blue on the wall. The standard hotel electrical panel and the Ns Hybrid Control Panel are in light blue on the wall.

For those working in the world of yachting, the objective is to adapt these batteries to the engine room environment. In this regard, Michele Maggi states: «This was one of the aspects we devoted the most attention to and we are now able to provide completely safe battery packs that do not risk catching fire and that are not susceptible to saline damage». Besides, the hybrid system is all included. At first sight, it could look like a normal generator because the inverters are also placed inside the soundproofed cabin. «We made an effort not to change existing engine rooms. The weights and dimensions are identical to those of traditional propulsion systems. We offer propulsion in this package, but also energy for all the onboard utilities. Everything is regulated by software that we have developed over four years of work. Moreover, we have relieved the yard of all responsibility because we are committed to guaranteeing global assistance, even on a remote basis, at whatever latitude the yacht is located», says the engineer.

To the right of the diesel engine, in green, is the Hybrid control panel. 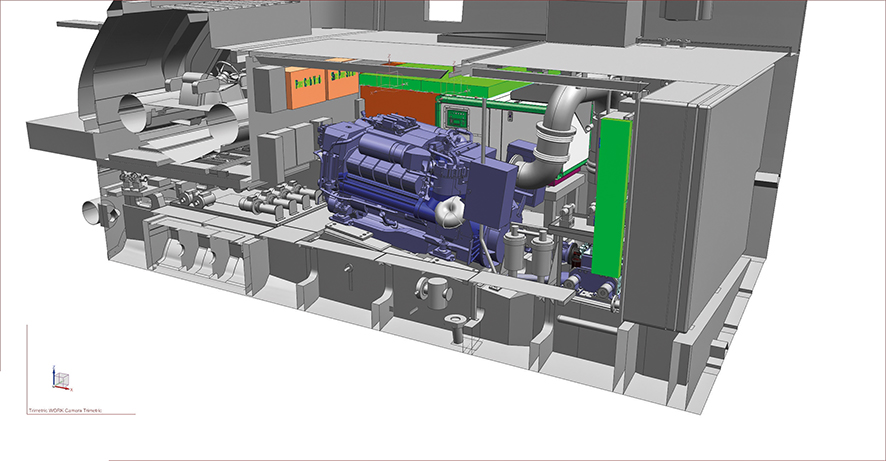 In short, the parallel hybrid makes it possible to consume less fuel and therefore to pollute less. A yacht that consumed 700 liters in a day can cut this to 120 liters with this system. And NOx emissions are also reduced as a consequence. The reduction can reach 50–60%, which is a much higher level than required by the new IMO III regulations in place since January for yachts over 24 meters and 500 GT.

e-Motion
Based in Miami and Italy. The American firm e-Motion LLC owns 100% of e-Motion Srl based in Tuscany. The prototype of the company’s hybrid system was fitted in the engine room of the Sanlorenzo 106 in 2014. Research has continued since then, leading to the development of the standard system in 2017. Today, e-Motion’s parallel hybrid can be used in boats from 15 to 65 meters and has already been adopted by Tankoa and Perini, in addition to Sanlorenzo. All the world’s top yards are currently negotiating with the company to start adopting these systems.