Cristian Pellegrino, the future according to Honda Italia 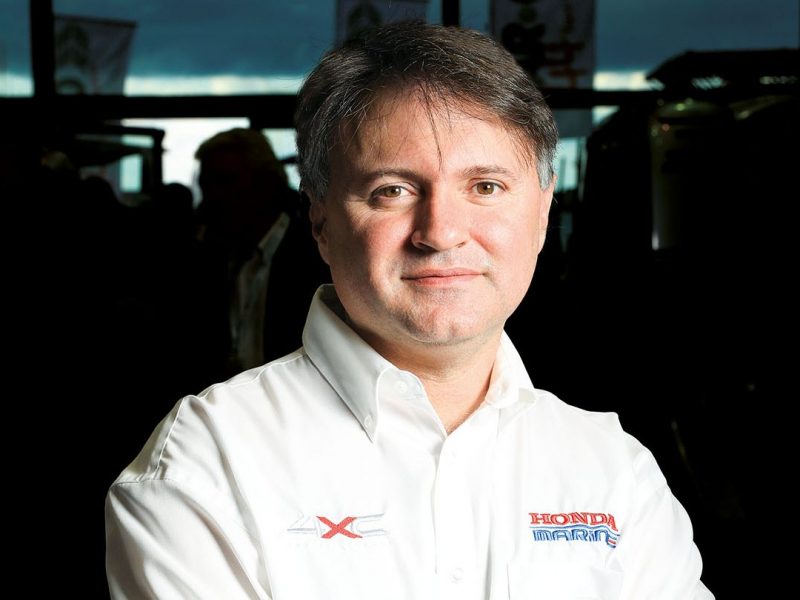 We met Cristian Pellegrino, head of the Power Product division at Honda Italia, to hear about the present, and especially the future, of Honda Marine

In 1964 Honda presented its first four-stroke outboard engine, the four-horsepower GB 30. A lot of distance has been covered since then. The belief that the four-stroke engine was the technology of the future has turned out to be a winning one.

Cristian Pellegrino helps us to better understand the current situation at the Japanese brand
Honda Italia is divided into three different areas – Cars, Motorbikes and Power. This latter section is the one that designs, manufactures and produces the engines for everybody and includes Marine, snow clearers, lawn and garden maintenance, and Industry with generators. Overall this means around 30 million units are produced a year, which means that the needs of our divisions can be met, as well as that from producers of other brands which use our engines. 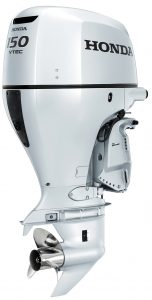 30 million engines a year is an amount that is difficult to imagine, we’re talking about over 82,000 engines a day, 365 days a year. What is the Italian market’s share in that?
At a European level, Italy is the market of reference for Honda, especially for the Marine area. Italy is third in Europe if we consider the whole power sector, but it holds the first position in Marine. And it’s not just that, the Italian market is also the one which absorbs the largest number of engines in the 2.3 to 150 hp segment. You have to remember that in the V6 sector we are third or fourth at a global level.

Honda, despite the fact that it has always been synonymous with research and innovation, and was the first company, for example, to launch four-stroke outboards, has not yet taken part in the race to create high-powered engines, unlike your competitors. Why is that?
To give you an example, in Thailand, a market which is predominantly professional, we have excellent results because the reliability of our product is recognised as a value and the market there is mainly based on maritime professionals, who are on average between 85 and 90 per cent of the total, the opposite of our market. That figure is the consequence of the approach that Honda has consistently taken after the shock created by the Lehman crash in 2008: to keep its listing on the New York Stock Exchange, Honda adopted very stringent corporate governance procedures, including the commitment to conform to pollution rules in all the countries where it seeks to operate. Our R&D department has indeed slowed down the development of higher powered engines in recent years, especially when in 2011 it was felt that we already had what was needed to meet market demand. It was true back then, but things have changed since. We are now working very intensively on a more powerful engine but we are taking the approach we have always taken, staying true to the Honda character.

That’s news. So you are working on a new outboard.
For the moment we don’t have a lot of data available, and I am not going to throw myself to hazard predictions that could turn out to be wrong. But what I can say is that we are working on a mechanical architecture which includes an increase in the number of cylinders, staying with aspirated machines, respecting our DNA, which looks for flexible engines, with moderate fuel consumption at cruising speed, and – when required – also enough power for speed. 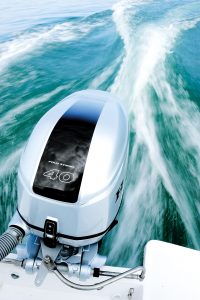 What about entry-level models for people who don’t have a nautical licence? Especially the 40 hp?
One of the faults which Honda has always had is not promoting itself enough. However I believe that is natural for a company that has always focussed everything on research and development on various fronts, including aerospace and robotics – I am thinking of Asimo for example. This engineering DNA has perhaps led us not to sell ourselves very much. And, to get to your question, our 40 hp is the most technological and modern in its category, but we have a market share which – all in all – is not that great, because its price is in line with the quality of the engine, but not with what competing constructors are charging. We cost around a thousand euros more, which in that market segment, makes a difference. But Honda has always tried to explain to its clients understand why we cost more, but in the specific 40 hp segment that isn’t easy.

Let us talk about reliability. We know that you have introduced an interesting initiative involving guarantees and customer assistance.
Yes, from this year we are introducing five years’ guarantee, giving a feeling of safety to the market thanks to motors which people really trust, starting from us. It is a Factory Made guarantee which means reliability and client service at the highest level. We are also including the programmed maintenance plan within the purchasing price: currently that is done in two separate financing operations, but we are aiming to do just a single one for the purchase and the maintenance programme. And beyond that we are working to increase the size of our sales and assistance network, entrusting the service to specialised workshops with proven capacity and reliability throughout the country, but which are under the control of the larger dealerships. This means a network on the ground which is based on reciprocal trust between the best dealerships and the selected workshops, and also consolidates the relationship of trust between dealerships and the mother house. Honda especially values long-term relationships with its dealerships and in general with whoever is part of its network.

For example?
Iin the Power division we have many companies that have been with us for 45 years, in Marine a lot have been with us since 1992-93 when we started up the division, but the aim is to make them become our dealerships with the same established relationship as the others. We ask for very high standards from them, and that means operating margins which are different from those people who don’t take much care of their sales network and then sell engines at prices that aren’t high enough to support the network. We prefer not to have dealerships everywhere but have trustworthy, consolidated ones, with which we can build a relationship of mutual trust. In 2011 we touched a historic low in the market, and we are still now 2/3rds down on the 2008 market, which is why we have gone from 120 dealerships then to 97 today, but in all cases these are healthy companies, which can run their network and a secondary network of sales and assistance, even during the holidays. So that means that our decisions are always customer-centred, because being able to guarantee assistance even in the middle of August is important for us, especially as it is also the time in which clients are using the boats. 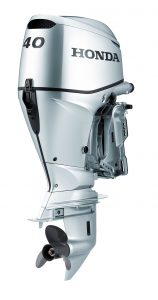 Let’s talk about the boating world in general, how would you describe the times that we are living through?
The boating world presents some critical elements, which are more pronounced than in a lot of other businesses, because we have a very strong seasonal component. But with financial tools for programmed assistance, and a bit of work for dealerships and workshops, we have managed to de-seasonalise a little. Additionally our five years of guarantee are also linked to the desire to give the dealership the chance to have maintenance programmes which can increase the length of the season.

You mentioned the fall in the market, and there is no doubt that it occurred, but how did Honda deal with this in comparison with your competitors?
Being competitive in the market has never been easy because there are people who want to conquer the market really quickly, and then those who have had organisational upheavals which have affected the sales network. That has caused the reduction in margins which helped to feed the sales and after-sales network, but has also created a bit of uncertainty. Going back to the 40 hp, just consider that at one time around 8,000 were being sold a year, whereas now we are at 5,000 and the margins have been reduced increasingly more. We have continued to follow our policy, which is to stay alongside the sales network, so as to support it when it needs it. This is reflected in the relationship that Honda clients have with dealerships, and we have developed a lot of repeat clients.

A view of the Italian market?
We are currently the fourth-largest player in the Italian market, in which the first four are also fairly close to one another, each having a share of over 15%. We still have the largest market share in the V6 sector, and in this the introduction of the 250 hp has helped us, as it has an extra advantage because of its performance levels. Something else that has been important for us has been the introduction of the small 4, 5 and 6 hp engines, which are around 20% of their segment, then there are tenders with 650-700 units a year, of which 90% are sold as a package, and the rest are sold as re-motorisations, and this certainly helps the 2.3 to 20 hp segment. As I said previously, we sell fewer of the 40 hp because of the reasons that I already mentioned, and which are linked to its price, but let me repeat, it is a very different kind of engine. Then there is a very interesting part in the professional sector too, where thanks to our 150 hp, we are getting excellent results, as we are with the 115 and 135, which have a lot of torque even at low revs, which makes them attractive to this kind of user.

People are talking about an upturn in the market, and the figures reflect that, especially in US markets. What effects will that trend have on Honda?
The American market is recovering very strongly and that has allowed Honda to renew partnerships with American shipyards, which we hadn’t done for a few years, and which is giving a new push to the design of the largest engines. I would say that all this means that there is definitely new energy to be spent in R&D, and this is energy which goes to meet the demand from a market in which Honda has historically been a major player. That is another reason why the range is being developed.

One last question: how much synergy is there between the various sectors that make up Honda, so cars, motorbikes and Power?
Synergy is very evident, and it is no coincidence that there are a lot of solutions which we also adopt on our outboard engines, such as BLAST and ECOmo, just to give an example, which come directly from developments made for MotoGP. Honda invests a lot in R&D and makes every result available to all company divisions, and thus ultimately to its clients.

(Cristian Pellegrino, the future according to Honda Italia – Barchemagazine.com – August 2018)