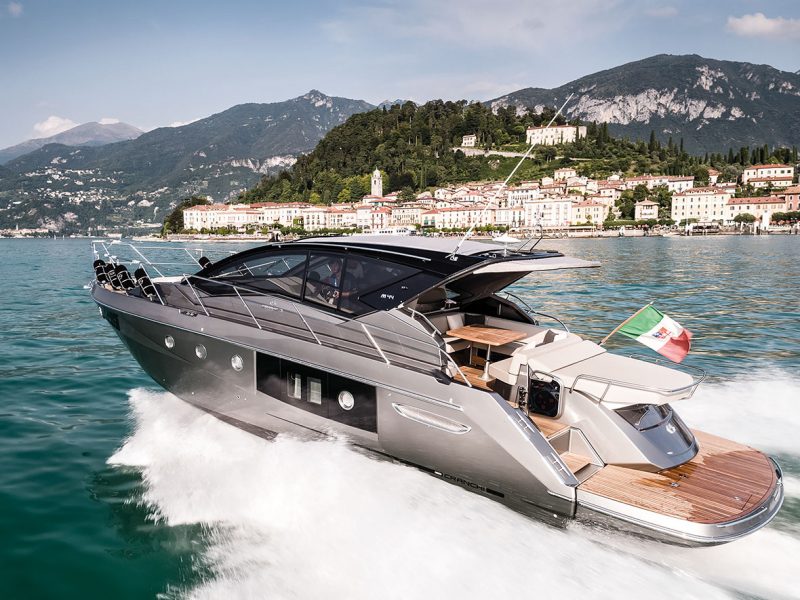 Cranchi M44 HT is a good example of how to build a boat with both good performance and seakeeping, without exceeding with the power of the engines.  The interiors layout has taken advantage of every centimetre available

Limited power, but good performance nevertheless. Savings on fuel usage, maintenance costs and purchase price, without giving up the pleasure of sailing your own boat. How is that possible? 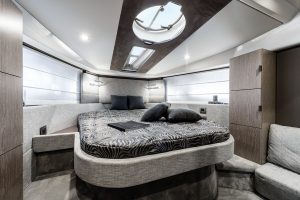 Put simply, one could answer that all it takes is being good at making boats. But obviously that’s a non-answer, a flippant reply trying to summarise so many – too many – things. And so what could be better than a good example?

So here is the Cranchi M44 HT, 14 metres long, 11 tonnes unladen displacement, two bathrooms, two cabins which sleep five, but in the engine room there are “only” two Volvo Penta D6s which develop 330 hp each.

Normally boats of this size have over two hundred more horsepower available, but they have very similar performance in terms of speed. Indeed, on a day with very calm seas we actually touched 33 knots, which is even more than what the yard states as its top speed, but – above all – we found what it is like to cruise at 3,000 rpm, which is when the Volvo Penta/M44 HT hull combination is at its most efficient. 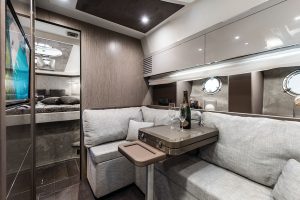 That means using 3.8 litres of Diesel every nautical mile, 104 litres an hour, travelling at nearly 27 knots. The engines are a long way from being forced, as shown by the sound levels registered both on deck, 82 decibels, and in the bow cabin, 74 decibels. All in all, the perfect cruising speed.

We really liked the gentleness of the change from displacement mode to planing, with an angle, six degrees at most, which is definitely an important feature on a yacht of this kind, with a fairly long foredeck.

The nicely designed raised double steering position also helps, with 360-degree visibility when protected by the electrically-operated hard top, which opens up to expose, if required, the living area, with a U-shaped sofa, lunch table and outside galley.

It is also worth remembering that, for a pure cruising family boat like this one, an extra knot of top speed is not particularly relevant, but rather it seems more sensible to spend less on fuel. That is also in view of the fact that the acceleration figures are completely reasonable, and average for family cruisers like this one: 10.3 seconds to reach planing speed, 23 seconds to reach top speed. 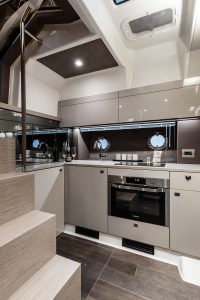 So the enjoyment of sailing has not been sacrificed. On the contrary, using an inboard-outboard means it is nice and agile, even at high speeds and the joystick is linked to the bow thruster, so that mooring this fourteen metre boat is real child’s play.

Finally, it should be noted that the Cranchi M44 HT interiors are well organised, and the most is made of available spaces. Just look at the rear cabin, with three real beds, or all the space in the bow cabin, not just to move around the bed, but also to stow your luggage. Amidships there is a real galley that truly deserves the name.