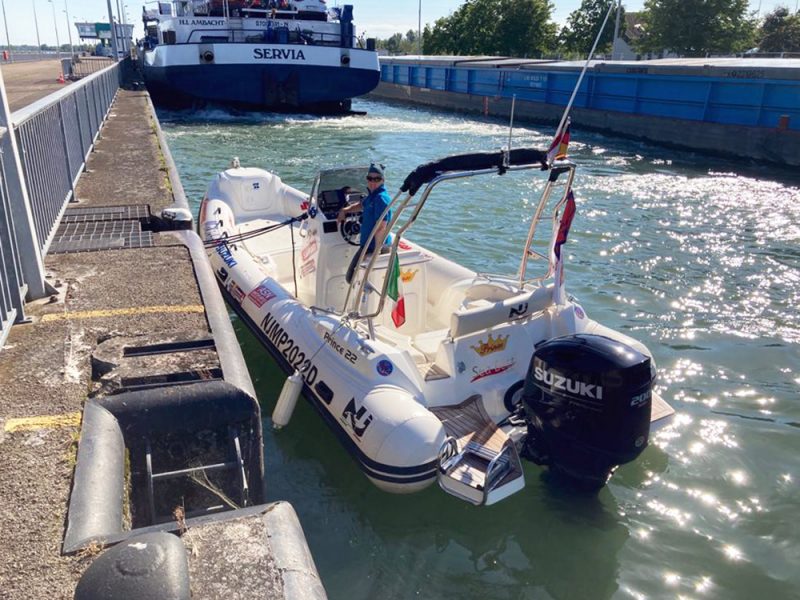 With the arrival in Basel, the raid by the Club del Gommone di Milano, Suzuki and Nuova Jolly came to an end. In 43 days the Suzuki DF200AP covered 2,928 miles

The raid started on 27 April last from the official Suzuki dealer’s premises in Fiumicino, continuing in its stages with a relay of nine crews taking turns at the controls of the Nuova Jolly Prince 22 powered by a Suzuki DF200AP outboard. Like every expedition organised by the Club, the aim of this latest ‘nautical marathon’ was not sporting but to spread the passion for the sea and sailing, demonstrating that, even with a normal, medium-sized pleasure craft and a standard outboard, you can get anywhere. 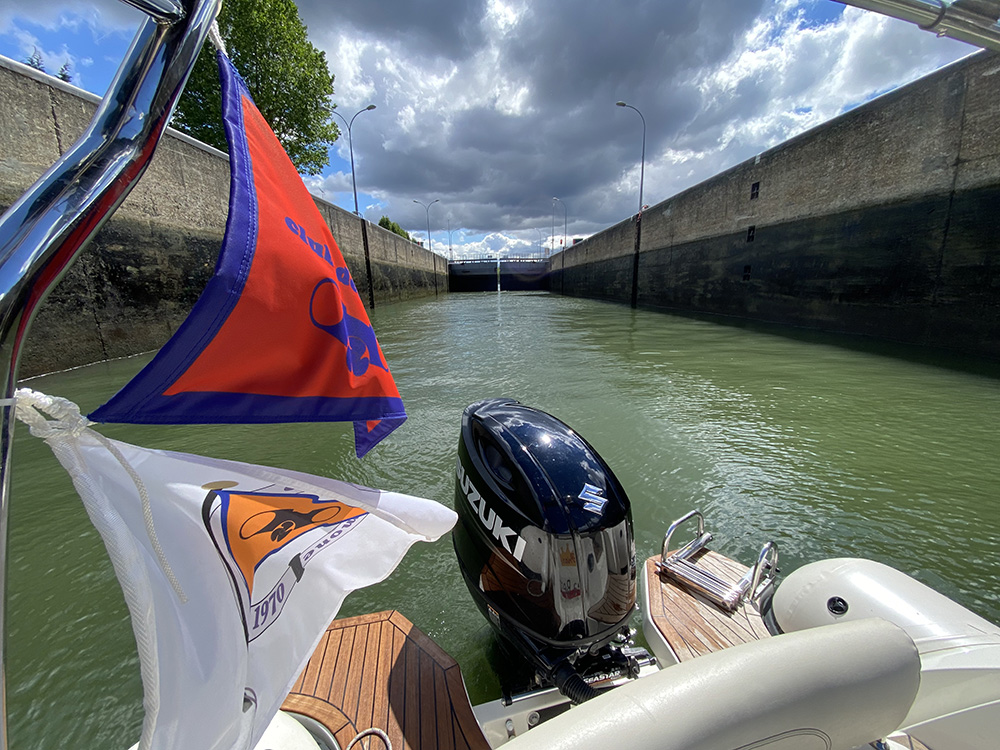 A route, that of the latest raid, across the Mediterranean, rivers and canals, to bring a message of unity to the European countries encountered along the way.

The first crew, comprising Eugenio Severgnini, Carla Gnemmi, Davide Cella and Daniela Covati, sailed along the Tyrrhenian coast for 239 miles until they reached Genoa, where they took over from the team comprising Angelo Villani, Clipper Telò, Stefano Rocca and Marco Mosca, which sailed a further 220 miles to Marseille, with a stop in Bordighera to carry out the 20-hour service on the Suzuki outboard at Teknosea a Suzuki Point of the Official Dealer of western Liguria “Marine Wizard” in Marina degli Aregai – Santo Stefano al Mare (IM).

From Marseille, the Nuova Jolly continued for another 240 miles to Toulouse with the crew consisting of Virginio Gandini, President of the Club, Alberto Redaelli and Enrico Bassignana, for what turned out to be the slowest leg of the entire raid. In fact, the crew had to pass no fewer than 63 locks – including the one at San Martin Lalande, which was blocked due to a sensor problem – while sailing within the 5 knots/h limit imposed by local regulations.

Once they reached Toulouse, Virginio Gandini, Giuseppe Cervo, Ambrogio Fumagalli, and Giuseppe Marinaro took command of the dinghy to complete one of the most complicated stages of the raid, due to some problems encountered along the 340-mile route to Les Sables d’Olonne. In Castelnau, in fact, due to the collapse of a bridge, the crew had to rely on a crane wagon to jump ten locks as far as Castelsarrasin, before continuing on to Port Blanes, in Bordeaux, where a heavy storm with hail, a nine-knot tide and a forty-knot headwind further slowed navigation.

For the 339 miles separating Les Sables d’Olonne from Saint Malò, the dinghy passed under the command of Franco Bodini, Gaetano Spadaccino and Maurizio Beltrami, for what could have been the most difficult leg of the entire raid but instead, thanks to the excellent weather, ended even earlier. The 137 miles separating Les Sables d’Olonne from Benodet, in Brittany, were the fastest covered during the entire raid, with the crew pushing on the throttle to arrive in favour of the tide, one of the phenomena that most affected this leg. “Although already seen on other occasions, for us Mediterranean yachtsmen the tidal phenomenon is always impressive. In Saint Malò it is even around 10 metres,” said the crew at the end of the leg.

Once they reached their destination, the Nuova Jolly welcomed the team of Alberto Meraldi and Fabio Peschiera, who had to deal with a major setback in completing the 362 miles of navigation to Paris. In addition to having to carry out the normal engine oil change, the crew hit a submerged obstacle near the second lock on the Seine. The impact was severe and despite the sturdiness of the outboard caused its foot to break, forcing it to make an unscheduled stop in Vernon for a complete replacement. Thanks to the direct help of Suzuki Italia, the problem was quickly solved.

From the French capital, the team, composed of Ottavio Comotti and Luca Mazzucconi, proceeded 430 miles to London, where they moored under Tower Bridge, but not before sighting the white cliffs of Dover. “We had been on the waiting list for months to be allocated a berth in London, but this is normal since we wanted to moor in the middle of the city, under Tower Bridge, during the Queen’s Jubilee celebrations. In general we encountered no problems with moorings in any port and the berths were also relatively cheap, between 15 and 20 euros per night. In the marinas on the canals we only paid once, 16 euro, in Capestang,” said the organisers of the Dinghy Club.

The eighth team consisting of Alessandro di Lelio, Danilo Redaelli and Giuseppe Cervo took the controls of the Nuova Jolly Prince 22 for the 280-mile leg between London and Amsterdam, in which they encountered very bad weather that forced them to stop in Ramsgate while waiting for improvement. Here, finding no rooms available in neighbouring hotels, the crew had to sleep on board. Fortunately, the good weather returned and the team continued on to complete one of the most expensive stages of the entire raid, given the petrol cost of 3 euros per litre they had to pay to fill up at Ijmuiden Port.

From Amsterdam onwards, the dinghy passed into the hands of Carmine Fariello and Patrizia Fariello, who completed the longest navigation of the entire raid, 478 river miles, upstream (up to 9 knots) to Basel, Switzerland, with a stop in Strasbourg for the customary photo in front of the European Parliament. On this leg, and particularly in the 140 miles of navigation between Saint Goar and Strasbourg, the Suzuki DF200AP outboard showed all its reliability, sailing for over 10 hours without ever being switched off.

From Basel, the dinghy returned to Rosenau, France, for towage and final completion of the European Raid 2022. 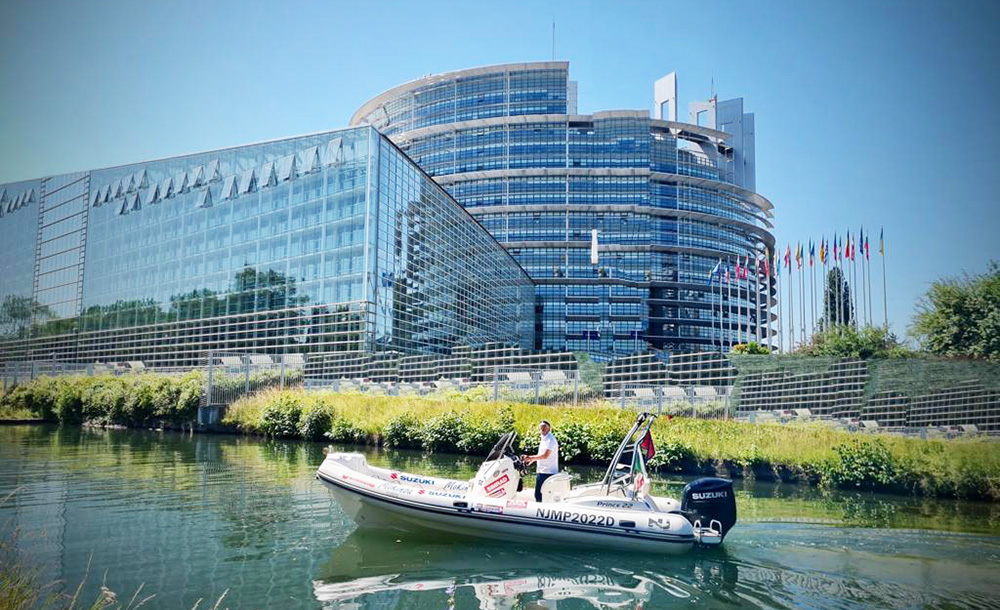 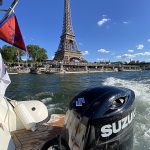 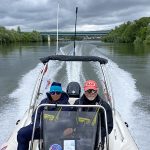 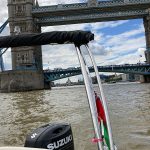 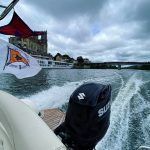 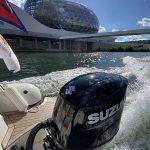 In total, the teams sailed 2,928 nautical miles, consuming 2,985 litres of fuel, and an average of 0.9 litre-mile, rising to 1.3 litre-mile only when sailing with a contrary tide.

At the end of the Raid, Club del Gommone President Virginio Gandini wished to dedicate a thought to all the crews and partners of this challenging and fascinating adventure: “European Raid 2022 – 2,900 miles, 43 days of actual navigation through seas, canals and rivers of most of Europe. A magnificent adventure that will remain on our web pages almost as if it were a pilot’s book, at the service of those who wish to retrace all or part of it, overcoming the questions and regulations required for a successful outcome. I am proud of the participating crews, some already veterans others new, all enthusiastic about this new experience where they expressed true team spirit. I would like to thank Suzuki once again for having entrusted us with the DF200AP, an outboard that ran almost non-stop every day, grinding out mile after mile in all weather conditions and with low consumption. Just as I would like to thank Nuova Jolly Marine for the Prince 22, a boat measuring just six metres and twenty, with comfortable spaces on board and a very gentle hull, and our other long-standing partner, Navico Simrad for all the on-board electronics, including the brand new NSX Chartplotter”. 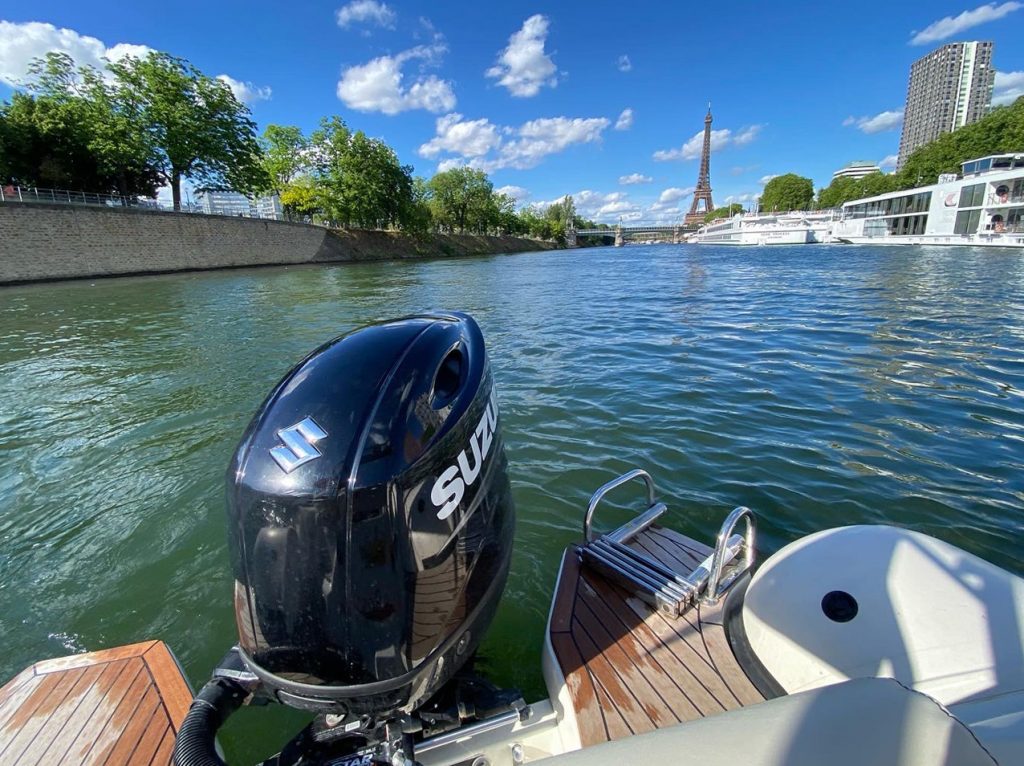